Located off the eastern coast of Malaysia’s northerly Penang island, and sandwiched between the two bridges linking Penang with the mainland, the vegetation of Jerejak island hides the remains of some of the country’s most important recent history, and some of its least known. The construction of a ship yard and a holiday resort led to the destruction of many of the historic structures, and newly unveiled property development plans suggest the island’s remaining natural and historical legacy is under renewed threat. 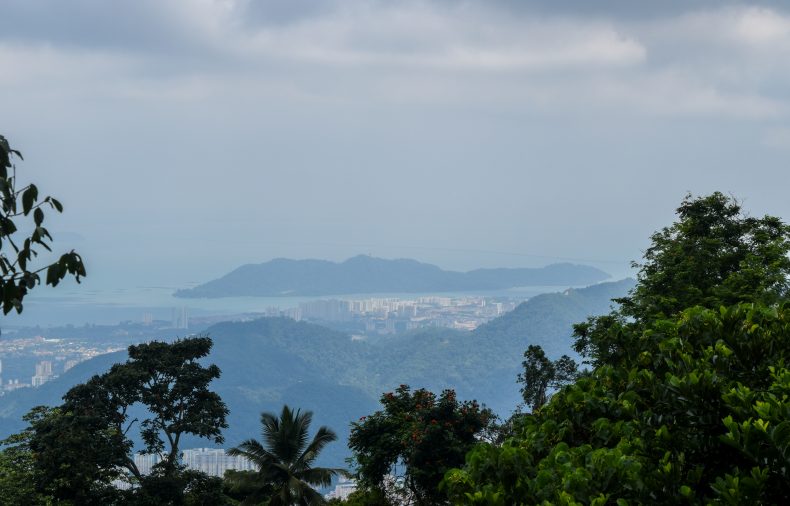 According to a local historian, who asked for anonymity given the increasing political tensions over the future development plans for the island, its historical importance is unrivaled. 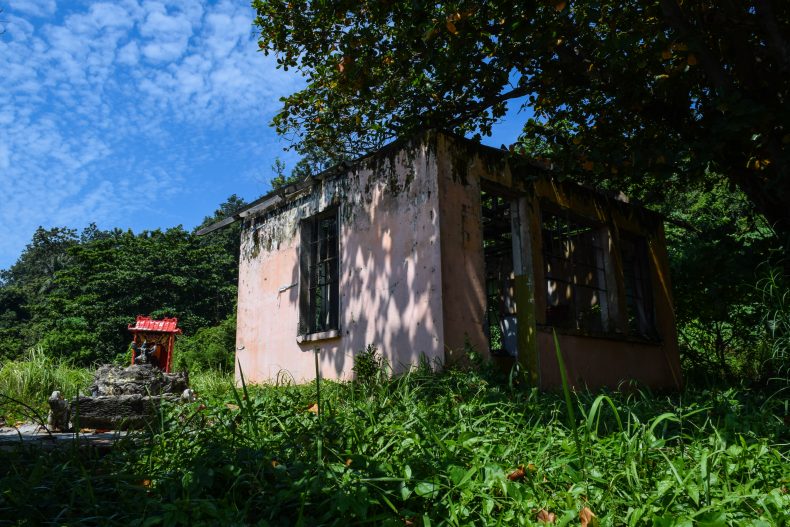 “Nowhere had more history per square inch than Jerejak. It is doubtful that you could find one place in Malaysia that has had more significance.”

“Almost every Indian or Chinese person who came to Malaya between 1890 and World War II either passed through Jerejak or the equivilent St. John’s Island in Singapore. And many Malay Muslims going on Hajj also passed through. Everyone has a connection to Jerejak,” they added. 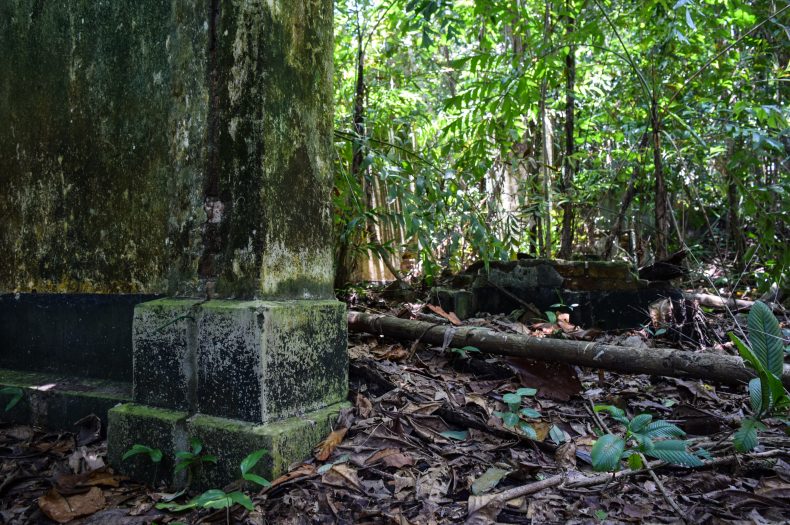 The walls are all that remain of the former Eurasian settlement, near the present day ship yard. Photo by Peter Ford.

However, this has not guaranteed the protection of the various sites and buildings that once housed more than 1,000 people on the island at any one time. The main camp on the island’s east coast was largely destroyed to make way for a shipyard, leaving only the shell of a church and a small cemetery. Another camp was flattened to make way for a holiday resort, while the recent construction of a reservoir on the island’s northern tip to support southern Penang’s booming electronics industry resulted in granite rubble being dumped across much of what had remained of the nearby prison buildings. 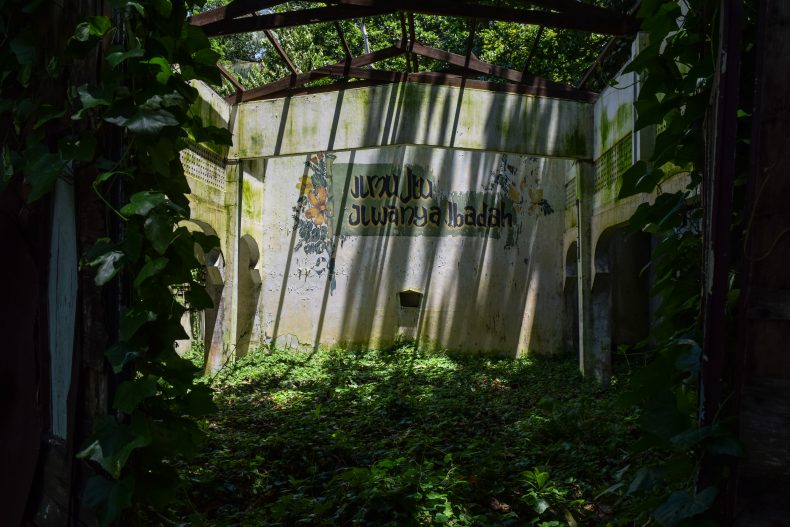 A building used as a kindergarden before the prison camp closed, north of the resort.* Photo by Peter Ford.

According to the historian, Jerejak’s history has been “bashed around, demolished and abandoned,” but they were adamant that enough remains to support efforts to preserve it for future generations, including calls for UNESCO recognition.

These efforts, however, have not yet resulted in concrete government support. Recent plans for the development of the island include condos, hotels and a bridge to Penang but do not mention preserving the island’s history or nature.

On the island’s southeastern coast, several religious shrines were demolished in 2013 by local authorities, and government officials have had to deny recent reports of illegal logging and clarify the terms of a plot of land being offered for sale near the shipyard. 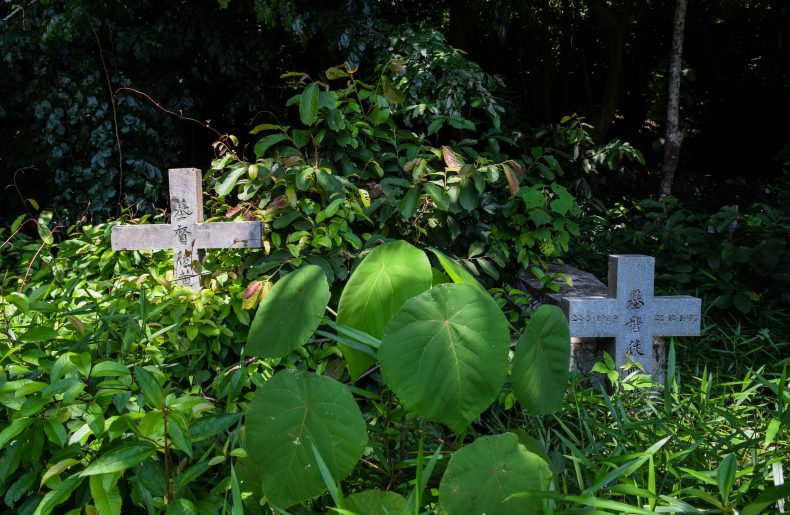 The forest is reclaiming a small Christian and Chinese Buddhist cemetery on the island’s west coast. Photo by Peter Ford.

From 1868 and into the 1960s, Jerejak was home to a number of facilities to care for leprosy sufferers. The initial construction was paid for local residents from Penang’s state capital George Town, and until the 1930s the island was the primary leprosy center in the British controlled Straits Colonies of Penang, Malacca and Singapore.

In 1877, the island took on the role of quarantine center, much like Ellis Island later was for immigrants to the United States. Attracted by the offer of free land for anyone willing to clear the existing vegetation, large numbers of immigrants from southern China and southern India flocked to Penang. With cholera, TB and other infectious diseases endemic across the region, the quarantine facility was set up to safeguard the existing residents of Penang and the Straits Colonies. 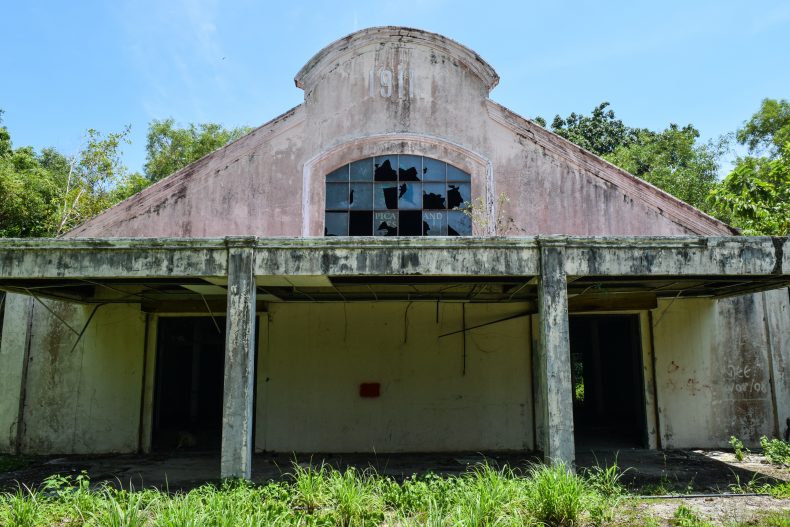 Building from 1911 at the northern quarantine camp. Photo by Peter Ford.

Following the Japanese surrender in 1945, the island became home to thousands of rescued Asian prisoners of war from Japanese work camps seeking repatriation.

In response to a TB outbreak in Penang in 1948, a number of the leprosy buildings were converted to accommodate up to 150 TB patients.

The race riots that shook Malaysia and Singapore in 1969 saw Jerejak pressed into service as a prison, with the June 12 creation of the Jerejak Rehabilitation Center. The center was initially set up to house people rounded up following the deadly violence that followed large gains by non-Malay political parties in the May 1969 general election. The prison later housed prisoners convicted of drug and violent crime offenses, earning the local nickname of “Malaysia’s Alcatraz,” and operated until 1993. 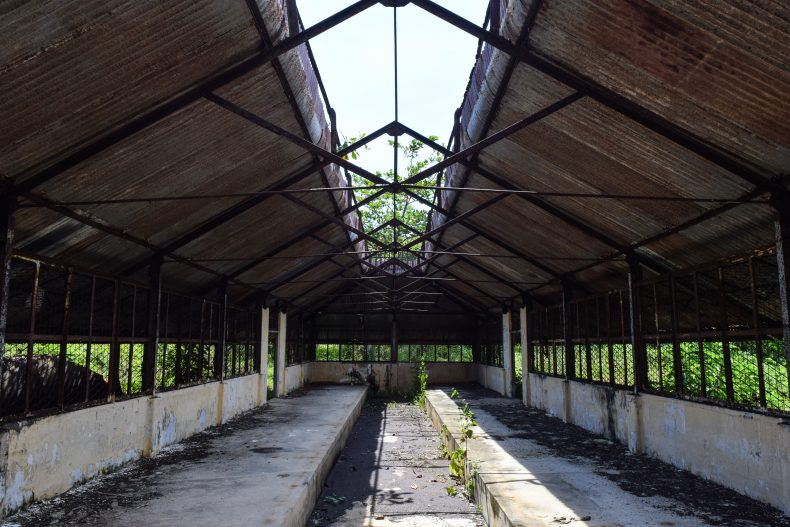 Inside one of the three remaining prison buildings at the island’s north. Photo by Peter Ford.

In 2000, construction began on a $7.5 million government-supported holiday resort on the site of the main leprosy center. Opened in 2003 and shuttered 13 years later, the unpopular resort is undergoing a facelift courtesy of prolific local developer Ideal Property Group.

A recent attempt to walk across Jerejak from the east coast’s Russian memorial for sailors who drowned when their cruiser, the Zhemchug, was sunk by the German cruiser Emden in the Battle of Penang in 1914, passing through the resort, to visit the site of the former prison met with obstruction. 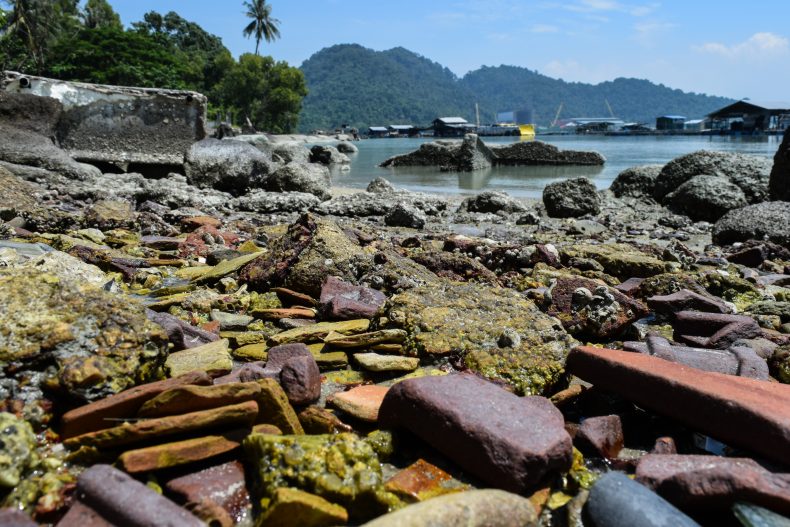 The beach near the Russian naval memorial is littered with the tiles and bricks from the former settlement. Photo by Peter Ford.

“Are you with an NGO? You cannot go there, this is a private island,” stated a purple-shirted security guard who identified himself as an Ideal employee, before his supervisor intervened.

Nearby, earth moving equipment, teams of workmen, and vast piles of building materials starkly highlighted the threats to the historic structures around the island in the face of Penang’s relentless development. 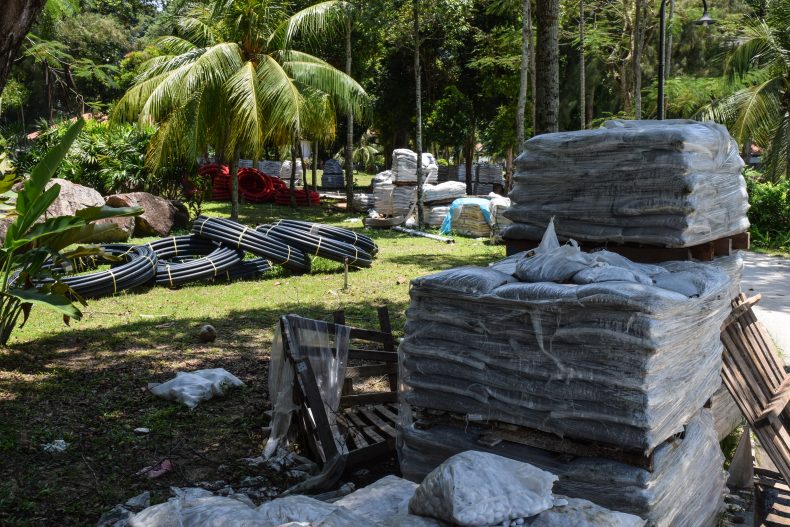 Building supplies for the refurbishment of the resort. Photo by Peter Ford.

The local historian is realistic about the threats to the island, and the likelihood that the remaining buildings will be preserved.

“Some of it will continue to be neglected and therefore survive, but for the island as a whole I would say [protection] is unlikely, but possible.”

*The caption on this photo has been updated to reflect feedback from readers about the building depicted.

Atheist groups test the limits of secularism in Kuala Lumpur.

Islamic Fashion on the Rise in Malaysia

As many Muslim women choose to dress modestly, more brands are joining this juicy market

Bush and Cheney on Trial

The Kuala Lumpur War Crimes Tribunal accuses George W. Bush and Dick Cheney of war crimes. They are serious accusations, but this isn’t a serious court.

Is ‘AUKUS Plus’ a Viable Option?

The absence of an Asian voice in an Indo-Pacific security alliance does not bode well. How can AUKUS include other states?

The Pacific nations of Kiribati, Samoa, and the Solomon Islands are facing their first significant outbreaks of COVID-19.