Editor’s Note: An earlier version of this article included an assessment of graphics from the U.S. Navy’s report that could have been interpreted as showing that the Alinic MC was traveling against traffic in an eastbound lane. The U.S. Navy has clarified that it does not contend the Alnic MC was traveling in this other lane and that this presentation in the report’s graphics was inadvertent. The Navy has adjusted the graphics in its report to prevent confusion and the corresponding analysis in this article has been removed.

Following months of investigation, the U.S. Navy released summaries of what it has found  on the collisions of two Japan-based destroyers earlier this year, resulting the drowning deaths of seventeen sailors when their berthing spaces flooded from the impacts. Analysis of the USS Fitzgerald’s collision with the container ship ACX Crystal in the approaches to Tokyo Bay last June and summary of the official fallout so far can be found here. Below is analysis of the USS John S. McCain’s collision with the Alnic MC entering the busy approaches to the Singapore Strait in August.

Early reports following the collision speculated that the McCain suffered a steering casualty, which caused the ship to veer into the path of the Alnic MC. The Navy’s investigation revealed that the McCain’s steering was functioning correctly, and that the “casualty” was caused by confusion, ignorance of how the ship’s steering system functioned, and a failure by supervisors to grasp what the real issue was, wasting critical minutes trying to correct a malfunction that did not exist.

Early on the morning of August 21st, the McCain entered the eastern approaches to the Singapore Strait en route to Singapore’s Changi Naval Base later that morning for a port visit. The McCain’s Captain arrived on the bridge shortly after 1 a.m. due to the heavy traffic and proximity to land approaching Singapore, and the Executive Officer joined him around 4:30 a.m.

As the McCain entered Singapore’s Traffic Separation Scheme around 5 a.m., a system of traffic lanes for ships, additional ship’s crew that would normally have supplemented control stations and provided safety supervision were not yet manned. Concerned about possible fatigue, the ship’s captain had decided earlier that it was more important to delay manning these additional watch stations in order to give the crew as much rest as possible before entering port. This decision was made against the advice of the ship’s Executive Officer and other senior supervisors who had all recommended stationing those additional watches earlier.

With a relatively strong current in a crowded strait, the McCain’s captain believed that the helmsman, the sailor responsible for physically manipulating the ship’s steering wheel and engine throttles, was having trouble both keeping the ship on course and adjusting speed. He ordered that the throttle control, called the lee helm, be transferred to a separate digital interface on the control console directly to the right of the ship’s wheel, so it could be manipulated by a different, dedicated sailor, allowing the helmsman to focus exclusively on maintaining the ship’s course.

If the Captain had heeded the advice to man those additional watch stations earlier, this split in responsibilities would already have taken place. Additionally, the two sailors responsible for steering and throttle control would have been under the supervision of an officer charged with confirming that rudder and speed orders were executed correctly, and who would oversee casualty procedures in the event of an equipment malfunction, but this officer was not yet in place.

No one else on the bridge realized, or thought to confirm, that control could have just been taken back at the ship’s wheel. Over the next two minutes, steering control was needlessly shifted five times between the manual wheel on the bridge, the digital helm interface next to it, and an emergency steering console in the aft end of the ship (twice, for unclear reasons).

Confusion and failure to follow correct procedures for transferring steering control between consoles caused the McCain to veer to the left, towards the Alnic MC. Each time the steering control shifted, the rudders moved to the angle indicated at the individual consoles. Sailors at the different steering control consoles are supposed to match their console with the ordered rudder angle to prevent unintended rudder fluctuations, but this was not done.

Before the steering “casualty,” the helmsman was keeping McCain’s rudder between 1 and 4 degrees to the right to counteract the current in the strait. When steering control shifted to the digital console, the rudders moved to the center (zero-degree) position, letting the currents push the McCain to the left. When control was later taken at the emergency console aft, the indicated angle was almost as far left as the rudders can go, which dramatically increased the rate of the ship’s left turn.

The next helm error tragically compounded the original steering confusion and errors. Upon hearing the  report that steering control had been lost, the McCain’s captain ordered speed reduced from 20 knots to 10, and then quickly to 5 knots, in an effort to reduce the effect of the apparent, but nonexistent steering malfunction. Unfortunately, when the helmsman executed this order, they only reduced speed on the McCain’s port (left) propeller shaft, and the starboard (right) propeller shaft continued to turn for 20 knots for over a minute while the port shaft slowed.

The higher speed on the McCain’s starboard shaft pushed the ship to port, exacerbating the port drift already being caused by currents and the apparent loss of steering control. The investigation summary does not reveal why no one on the bridge noticed that the engine speeds were not matched for over a minute while the McCain’s starboard shaft pushed it irretrievably into the Alnic MC’s path. 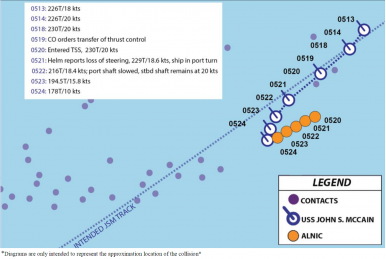 The speed error was the result of the helmsman believing that two shaft’s throttles were linked, or “ganged,” meaning that adjusting one would adjust both, when in fact they were not. Conning officers, the officer giving the orders to change course or speed to the helmsman, who physically manipulates the controls, are taught to watch rudder and engine indicators to ensure that their orders are accurately carried out and that the ship responds as expected. This apparently did not occur, and the lost minute before the engine error was noticed and corrected sealed the ship’s fate.

Interface Design May have contributed to Throttle Error

While the helmsman is supposed to be trained to know how to properly manipulate the ship’s wheel and engine throttles, its is possible that an upgrade to the ship’s control systems contributed to their throttle error. Older Arleigh Burke-class destroyers like the McCain were built with a Ship’s Control Console that include a physical ship’s wheel to control the rudders, and two physical throttle levers to control the engines. With these controls, “ganging” the throttles is accomplished by sliding a metal pin that physically connects the two levers together.

With those physical levers, even if they are not ganged, it is difficult to make the error of adjusting one throttle but not the other, or at least difficult not to quickly notice either visually or by touch. But the McCain no longer had physical throttle controls like this. At some point, the physical throttle levers were replaced with a digital screen interface controlled with keyboard and trackball. Instead of grasping physical levers, a lee helmsman now had to chase a cursor around a screen, in this case in the dark, and under significant stress.

It appears likely that this digital interface contributed to both critical errors that night. The original mistake that took steering control away from the physical wheel and transferred it to the digital interface would not have been possible on the older control console, which had no secondary steering control interface. The second mistake of adjusting only one propeller shaft’s speed would have been much more difficult to commit, and much easier to catch and correct with the physical throttle levers of the older consoles.

The crew entrusted with manipulating these controls are responsible for understanding how they work and how to recover from errors and casualties, but smart designs should make it easier for those sailors to do so, particularly in situations of high stress and stakes like the McCain found itself in that night. Instead, the design of the ship’s upgraded consoles may have made the task of carrying out critical orders more difficult, and mistakes more difficult to recover from.

Five officers may be tried for dereliction, hazarding a vessel, and negligent homicide.

USS John S. McCain Returning to Japan to be Repaired

Damaged U.S. destroyer departed Singapore for U.S. base in Yokosuka.

The U.S. Navy has dismissed the commander of its 7th Fleet from duty, following the second deadly ship collision in less than three months.

U.S. destroyer is moored in Singapore, damage being assessed and search for missing continues.