Gender-based violence in Afghanistan can take myriad, often less-than-subtle forms, particularly in the most remote regions of the country. When human rights worker Sadia Ekrami tried to speak about basic rights to a crowd of men in a village in northern Afghanistan, she was threatened with death, and forced to flee for her life. “Fortunately, I talked my way out of them killing me, but it is an example of how women in Afghanistan who speak out can end up dead,” she said.

Sadia, also a social media expert, knows a bit about the problem. She follows every form of gender-based violence in northern Afghanistan. A recent survey, which she conducted, turned up some classic tales of workplace harassment. In one case, a male colleague told a female co-worker that he had fallen in love with a movie actress “who looked just like her.” When he gave her a flash drive containing an inappropriate movie, she was not amused.

Other school girls in the northern city of Mazar-I-Sharif, as in large cities anywhere in the world, report being stalked. Indeed, around 87 percent of Afghan women experience at least one form of gender-based violence in their lifetime, according to the United Nations.

Yet, Sadia sees signs of change in the air – and across the region. “Social media has opened up new possibilities for women and girls in Afghanistan,” she said. “Before we didn’t know what to do, but now women are telling their stories.”

The struggle of Afghan women, girls, and boys to overcome abuse, harassment, gender-based violence, and sexual violence has its parallels around the world, and has been addressed in new ways in 2017, particularly through the media. Societal definitions of what constitutes gender-directed violence and sexual violence are under fresh scrutiny. This year’s vibrant global conversation, inspired by new stories in the media about gender-based violence, abuse, and harassment stemming from a willingness of survivors to speak out, has given fresh impetus for change on a global scale.

Annually, the “16 days of Activism against Gender-Based Violence Campaign, “ which runs from November 25 to December 10, marks a global campaign aimed at raising public awareness and mobilizing everyone – men, women, and children – to counter all forms of  violence against women, girls, and boys. The theme of this year’s 2017 campaign is “Leave no one behind,” a notion that suggests to me that we need to reach out as families, communities and institutions to confront this scourge in new ways.

As the Special Representative of the UN Secretary-General for Afghanistan, I lead an assistance mission focused on preventing conflict and making peace, and this also includes addressing the root causes of the violence that shatters the lives of women, girls, and children. 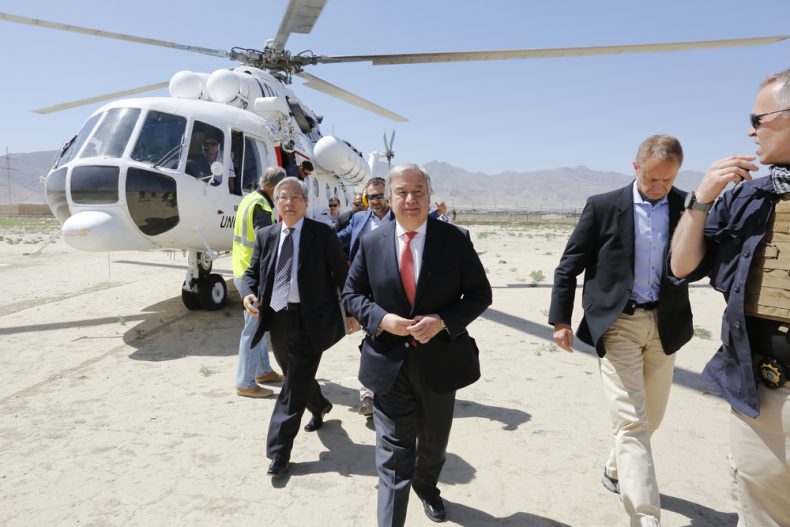 KABUL, 14 June 2017 – UN Secretary-General António Guterres on Kabul’s outskirts met today with some of the 800,000 Afghans displaced by conflict in last 18 months, as part of a one-day visit to the country’s capital. The Secretary-General is visiting Afghanistan to show solidarity with the Afghan people – backing an Afghan-led peace process and supporting the communities most affected by the conflict. Photo UNAMA / Fardin Waezi.

In Afghanistan, gender-based violence takes extraordinary forms, including women and girls traded in a marriage exchanges between families in a practice known as badal, giving away girls to settle disputes, known as ba’ad, and  the practice of bacha bazi, where boys are used as sex slaves.

Fortunately, Afghanistan’s government in concert with the United Nations has already acknowledged that gender-based violence is endemic and needs to be eradicated through, among other means, the rule of law and proper enforcement mechanisms.

Pursuant to UN Security Council Resolution 1325, passed in 2000, Afghanistan has put in place the Elimination of Violence against Women Law (EVAW Law), including the establishment of the Commissions on EVAW at national and local levels and the EVAW Prosecution Units. It also has seen to the creation of women protection centers and the progressive increase in recruitment of policewomen.

Today, across Afghanistan, there are 205 gender response units, run primarily by women of the Afghanistan National Police, in some of the most troubled parts of the country. Despite the challenges they face in gaining acceptance, I am encouraged by the dedication of these Afghan policewomen. Their motivations to work in the special police force spring from their compassion, concern, and generosity for all Afghans, particularly women and girls.

One new recruit told the UN that she had joined after seeing a woman “killed in broad daylight” in Kabul. Other women, who come from broken and brutal homes, do it literally to stop others from being victimized by the same variety of violence that has ripped through their own lives.

Another recruit told the UN: “My own mother used to face so much violence. The marriage of my mother was a forced one. She used to be beaten by my father daily, and mentally she was abused all her life. Due to all this violence and issues, my mother is not well. She is mentally ill and doesn’t recognize her children, which is painful.”

These women have become heroes in their own communities: They sometimes take victims of gender-based violence into their own homes, acts of valor that put their own lives and families at risk.

Though women in developed countries are also subject to ostracism and further abuse for speaking out, in Afghanistan that can also be accompanied by societal perceptions that the violations of a woman or girl has tainted her for life. She, in turn, can be abandoned by her own family.

The United Nations Assistance Mission in Afghanistan (UNAMA) has taken a special interest in providing support for media organizations determined to break the silence and help marginalized women, girls, and boys tell their stories. The UN has sponsored forums and athletic events to promote conversation and awareness of gender-based violence and harassment, and has worked with local media outlets to extend these messages across the country.

What I’ve learned from watching our work with the media is that a responsible press is a key to shining a light into dark corners and onto the harsh realities of gender-based violence. Even reporters, who persuade their editors of the need for more in-depth reporting on these forms of violence, are helping to fulfill a promise to all of us.

It is my hope that in the coming year, in Afghanistan and across the region, we can find new approaches to tackling gender-based violence. All of us can take part by promoting a gender-friendly work environment, assessing our own behavior, supporting the hard work of law enforcement, and thinking of creative ways to address what are arguably some of humanity’s most shameful practices.

Tadamichi Yamamoto is the Secretary-General’s Special Representative for Afghanistan and the Head of the UN Assistance Mission in Afghanistan (UNAMA).

As the world adapts to a “new” Afghanistan, there is much work to be done to help Afghans in need. From its temporary base in Almaty, UNAMA will continue to work toward this goal.

Can the UN Push Afghanistan and the Taliban Back to the Negotiating Table?

If the path to peace in Afghanistan is via negotiation, the Taliban don’t seem to be keen on taking that road.

The World Must Step Up to Save Afghanistan’s Children

The world must commit to supporting Afghan children living amid continued conflict and violence.

Afghanistan Needs Peace, But So Much More

Real peace – the type that lasts – is about much more than the absence of guns and explosive devices.