Under the rallying call “Bali Tolak Reklamasi” (Bali Rejects Reclamation), groups and organizations around Bali have banded together to protest a proposed tourism mega-development in the Badung Regency of Bali’s Benoa Bay. The movement has now been active for five years and expresses concerns about environmental and cultural integrity, economic inequality, democratic participation in development trajectories, and evidence of political-economic corruption.

International tourism has been the main developmental trajectory in Bali for decades. The number of foreign tourist arrivals has increased from approximately two million arrivals per year in 2008 to 5,697,739 in 2017. While the tourism economy is booming, the benefits are for the most part reaped by outside entities, while the costs are socialized among the Balinese population. A 2015 study showed that an estimated 85 percent of the tourism economy is non-Balinese owned, and that the tourism industry accounts for 65 percent of Bali’s water consumption. To make way for tourist development, rice paddies are being cleared at a rate of 100 hectares per year, and 260 of Bali’s 400 rivers are already dry.

The Bali Tolak Reklamasi movement exemplifies a two-fold process. The globalization of communication and information has increased the ability for various actors from diverse localities — who have concerns or alternative ideas for developmental trajectories — to situate their concerns within a global discourse. Simultaneously, policies associated with the globalization of the economy are often causal factors in expanding wealth and income inequality, food insecurity, environmental degradation, and resource dependency. The policies often equate “development” with economic growth, and thwart democratic processes to the extent that popular will is superseded by the interests of corporate-political beneficiaries. But the multifaceted outcomes of globalization processes has also allowed citizens with diverse concerns to recognize the interrelated nature of contemporary social, ecological, and economic injustices, and thus unite in opposing actions from multiple angles. Activists involved in grassroots activities are now able to recognize the interconnectedness of myriad local issues and connect their concerns with transnational actors with similar contentions, forming coalitions that transpire national boundaries.

Balinese expressions of identity have been controlled throughout history and can be traced back to the Dutch colonization of the island in the mid-19th century. This conquest has remained a critical part of contemporary Balinese identity discourse, marked by the significance of the battle for Klung Klung in 1906 and Badung in 1908. In these instances, faced with guaranteed losses at the hands of Dutch forces, Balinese commanders led an action referred to as the puputan – the collective, willed death of the entire command in the face of inevitable defeat.

The Dutch subsequently introduced international tourism to Bali in the 1920s under a specific cultural policy known as “Baliseering” or “the Balinization of Bali.” Through an educational focus on Balinese language, literature, and arts, they aimed to dramatize the cultural aspects of Balinese life to be used as a selling point for tourism.

Suharto’s military coup in 1966 led to new policies influenced by a capitalist model of development and backed up by a geopolitical alliance with the United States. At the same time, expressions of ethnic identity in Bali, the only Hindu island in the Indonesian archipelago, were strictly defined and monitored. Following the deregulation of the banking system in 1988, foreign and domestic investment in development projects in Bali increased by 1,000 percent.

There were multiple instances during the 1990s where the local Bali Post newspaper reported on building environmental concerns amongst local Balinese, such as the unregulated mining of limestone and coral for hotel and airport construction, coastal erosion, plastic waste, sewage and air pollution, and water source diversions. The introduction of Green Revolution technologies including foreign seed varieties and agrochemical inputs deeply affected the integrity of the now UNESCO recognized subak water irrigation system and drastically decreased rice yields through water deficiencies and outbreaks of pests and diseases. The emergence of a speculative investment market led to rapid inflation of land prices, so that the agricultural use-value of land was effectively subordinated to its capital-value. 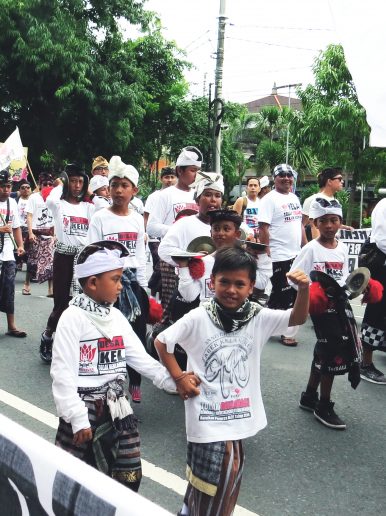 Supporters of the Bali Tolak Reklamasi Movement march toward the governor’s office. Photo by Pascale Hunt.

In 2011, President Susilyo Bambang Yudihono (SBY) published the “Masterplan for Acceleration and Expansion of Indonesian Economic Development” that detailed plans to achieve economic growth through a specific emphasis on tourism in Bali. The disputed Benoa Bay area was identified as a designated “Investment Focus Zone.” The document outlined the leading role for the private sector in economic development, and stated that “the government will amend or remove regulations that inhibit the implementation of investments.”

The Benoa Bay project is led by PT Tirta Wihana Bali International and entails the reclamation of 700 hectares of land from the harbor, which connects the highly developed Kuta, Sanur and Nusa Dua districts of South Bali. In December 2012, before the announcement of the proposal or any Environmental Impact Assessment had been discussed, the governor of Bali, I Made Mangku Pastika, provided a reclamation permit for Benoa Bay to TWBI before issuing a decree in August the following year, calling for a feasibility assessment on the Benoa Bay area. The initial permit contradicted Presidential Regulation No. 45 of 2011, which declared Benoa Bay a conservation area, and Presidential Decree No. 122 in 2012 on Reclamation in Coastal Areas and Small Islands, which barred reclamation activities from being carried out. Later in 2014, President SBY issued Presidential Regulation No. 51, an official Amendment to Presidential Decree No. 45 of 2011, removing Benoa Bay’s conservation status and declaring it a “commercial zone.” This action is one of the central tenets of the Bali Tolak Reklamasi movement.

Additionally, movement participants are concerned about the conservation and reservoir functions of the bay, damage to coral reefs, coasts, and water salinity, and biodiversity loss. The Benoa Bay area holds 1,375 hectares of mangroves, five rivers, 12 villages, and approximately 150,000 residents. In addition to environmental concerns, there will be social costs such as the exacerbation of economic inequalities between North and South Bali, and members are outraged at the injustice related to the undemocratic nature of the government’s disregard for popular will in favor of private interests. The complete list of the movement’s contentions are provided on the ForBALI website in a document entitled “13 Alasan Tolak Reklamasi Teluk Benoa” — 13 Reasons We Reject the Reclamation of Benoa Bay.

The location of the conquest of Badung in 1906, the southern-most regency in Bali, is commemorated by Puputan Bandung Park, in what is now the sub-district of Denpasar. Bali Tolak Reklamasi conducted a demonstration at the park on February 17 2018, where participants marched through the streets to the governor’s office. At the time of colonization, puputan events were portrayed as a victory of the colonial state against indigenous leaders, but today ownership of this discourse has been retaken by Balinese. The legacy of puputan is used to express unity in opposition to colonialism and external domination as well as Balinese ethnic identity. Additionally, the juxtaposition of cultural symbols with symbols of capitalist development, such as the bulldozer, illustrates the integration of historical-contextual meanings with wider frames that express opposition to the economic, environmental and cultural costs of globalization.

Opposition to the Benoa Bay proposal is undoubtedly one of the most polarizing issues in contemporary Balinese discourse and has brought together environmentalists, youth, students, musicians, artists, religious leaders, farmers, and fisherman.

Pascale Hunt is an Indonesia-based freelance writer and multimedia content producer, focusing on environmental and human rights issues in the Asia Pacific region.

After COVID-19, what do Balinese want their island’s ‘new era’ to look like?

The move, along with similar steps in Thailand and the Philippines, could mark the beginning of the end of the great Southeast Asian tourism recession.

New development efforts pit hopes for more tourists against concerns about damaging the very same environment that draws them.

Will Mandalika Be the Next Bali?

The state was heavily involved in getting Indonesian tourism going in the 1970s, but today's industry may call for a more hands-off approach.