As China’s manufacturing sector slows, the Chinese government has turned to the high-tech and start-up sectors to drive economic growth and employment. China’s Internet Plus, artificial intelligence, and Made in China 2025 strategies aim to position China as the next technological powerhouse.

To achieve this vision, President Xi Jinping has said the Chinese government will actively support tech companies and first-class research. In particular, he emphasized the need to support small-to-medium enterprises and start-ups.

But it remains to be seen whether China’s state-backed ecosystem is able to truly lead the world and spread innovation outside of elite firms to boost employment. To achieve its ambitions, it will have to earn the trust and respect of a broader audience; no small feat given the extent of state involvement.

For now, the approach seems to be spurring growth as intended. The South China Morning Post, citing a study by the Chinese Academy of Social Sciences, reported that the “new economy sector” counted as nearly 15 percent of the whole economy in 2016, with an annual growth rate of 16 percent in the 2007-2016 period. Tech giants Alibaba and Tencent alone are now worth more than a trillion dollars combined, thanks to their online payment networks and shopping platforms. China is also responsible for some cutting-edge research and innovation, particularly in Zhangjiang Hi-Tech Park in Shanghai.

The Nature of State Involvement

China’s underdeveloped capital markets and tightening real estate sector mean there is no shortage of funds looking for higher returns in the start-ups sector. But compared with other major economies, the state plays a much more prominent role. In Xi’s own words, China’s “biggest advantage is that we, as a socialist country, can pool resources in a major mission.”

Governments have always played an active role in facilitating innovation, partnering with the private sector, and using the tech sector to further their own ambitions – but China places the state near the center of the ecosystem.

At least some element of the Chinese state, whether federal, provincial, or political, is involved in almost every facet of the tech ecosystem. The state is often the primary funder or at least a significant shareholder in start-ups. It also provides housing, office space, and salaries for many start-ups, and subsidies for major tech firms based in special economic zones.

During a recent visit to China, several founders and executives told me government relations are the most important factor for their business. Government Cooperation was even an official pillar of activity within one incubator in Shanghai.

Many tech companies are also plugged into key national priorities and initiatives. Top-tier Chinese tech firms are working directly with the government on artificial intelligence projects, following Beijing’s 2017 announcement of an ambitious agenda to “lead the world” in A.I. by 2030. Edutech firms provide training for foreign workers employed in Belt and Road projects. And advanced manufacturing firms that develop consumer goods also build military hardware for the People’s Liberation Army. 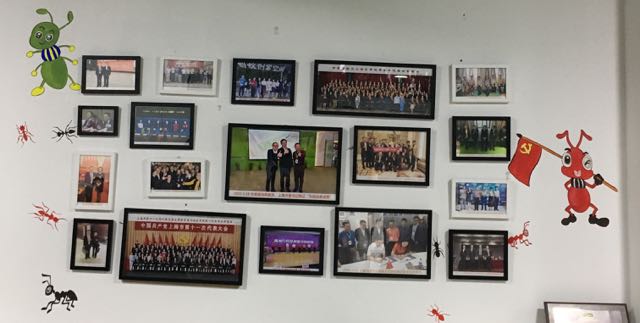 A government engagement wall at an incubator in Shanghai. Photo by Arjun Bisen.

While China’s model, with its abundant capital, clear policies, subsidies, and government support, has undoubtedly helped create an impressive industry, it comes with some downsides. Beyond the shiny exterior are signs the ecosystem is not as healthy as it first appears.

The government’s top-down, supply-driven approach may have led to a start-up bubble. City and provincial governments appear to have interpreted Xi’s calls for greater support for small-to-medium start-ups to mean “build more incubators.” The three incubators and special economic zone I recently visited were ghost towns. Each of the incubators looked similar and had many of the same set of companies listed as clients, but few seemed to be in active use, suggesting a shortage in demand.

Outside of top-tier firms, reverse-engineering remains the dominant business model. The majority of businesses appeared to be co-opting existing foreign tech. This casts doubt on whether China’s model for innovation can succeed at its second objective of creating new jobs en masse.

There also remain questions over whether China can marshal enough soft power to succeed in its goal of becoming a world leader in technology. The extent of state involvement, even when benevolent, does little to ease existing skepticism of Chinese tech companies and fear of Chinese economic coercion internationally. Recent allegations of spying on the African Union and threats of economic consequences for those who criticize Chinese foreign policy could further reduce trust in Chinese firms and limit their ability to expand globally.

The broader debates around ethics and societal impacts also appear significantly underdeveloped in China, despite Jack Ma’s bold statements on the dangers of artificial intelligence at Davos. Questions about job losses due to advanced manufacturing are often dismissed by citing China’s aging population, and discussions about privacy, ethics, and the impact of advanced state surveillance are shrugged off.

To be seen as a global leader in technology, Chinese industry needs to build trust abroad. To do so, the state would need to draw clearer lines between its interests and tech firms. Chinese industry would also need to engage more frankly in global debates on technology and society. A focus on technological growth has sufficed until now, but to realize China’s broader ambitions, there needs to be a shift.

Arjun Bisen is an Australian Fulbright (Anne-Wexler) scholar and Master of Public Policy student at the Harvard Kennedy School.

China’s Artificial Intelligence Revolution: a Sputnik Moment for the West?

If Western countries wish to compete with China in artificial intelligence, they will need to strengthen their ambition.

China’s Fifth Plenum: What You Need to Know

China's leaders issued a blueprint for the next five years - and beyond. Below, the highlights.

China Steps up the Long March to 5G