In 2003, then-U.S. Secretary of Defense Donald Rumsfeld flew over Marine Corps Air Station (MCAS) Futenma, Okinawa, looked down, and declared it to be “the most dangerous base in the world.” Of course there are many bases, including some in war zones, that could contest that honor. The question is, what did Rumsfeld see that shocked him into making this extreme statement? He saw an airstrip smack in the middle of a crowded city, with residences, parks, schools, and businesses crowding right up to the fence.

While Rumsfeld is not known as an expert on aeronautical safety, his instincts were correct. The situation of MCAS Futenma is in direct violation of the safety standards set down for military airfields by the U.S. Department of the Navy, in accordance with Federal Aviation Administration (FAA) regulations. These standards include, among other things, the requirement that at each end of any runway there must be a clear zone, free of all construction other than airport lighting. The Department of the Navy directive OPNAVINST 11010.36c states:

Clear zones, areas immediately beyond the ends of runways and along primary flight paths, have the greatest potential for occurrence of air accidents and should remain undeveloped. (4.a.[1])

The clear zone is required for all active runway ends. (4.b.[1])

No structures (except airfield lighting) buildings or aboveground utility/communications lines should normally be located in clear-zone areas on or off the installation. (Note 4 to table 2)

The word “normally” indicates that there may be exceptions. But the Department of the Navy directive sets out a way of dealing with those. Of course where there are exceptions – buildings in clear zones – the Navy doesn’t have the authority to command their owners to raze them. Rather, the directive establishes the Air Installations Compatible Use Zones (AICUZ) program. The AICUZ  program requires base commanders to cooperate with local governments in establishing clear zones through the use of zoning laws and other means within the local government’s jurisdiction. The purpose of this is described as twofold: “to protect the public’s health, safety and welfare and to prevent encroachment from degrading the operational capability of military installations in meeting national security.” That is, to protect the people living or working near the base from death or injury, and to protect the base from being shut down.

The directive states that AICUZ programs are required for bases within the United States and its territories and possessions, and that they “may be developed” at bases in foreign countries. That is, they are not required. But at MCAS Futenma an AICUZ program exists, though for “noise study only.” As for clear zones, the aerial photograph below shows that MCAS Futenma has adopted the perfect bureaucratic solution: the requirement to have clear zones has been met by simply designating two areas (largely off the base) as “clear zones” while doing nothing actually to clear them.  This, presumably, is what shocked the not-easily-shockable Donald Rumsfeld.  Every USMC Air Facility inside the United States has clear zones entirely within the base. Futenma base isn’t large enough to do that. 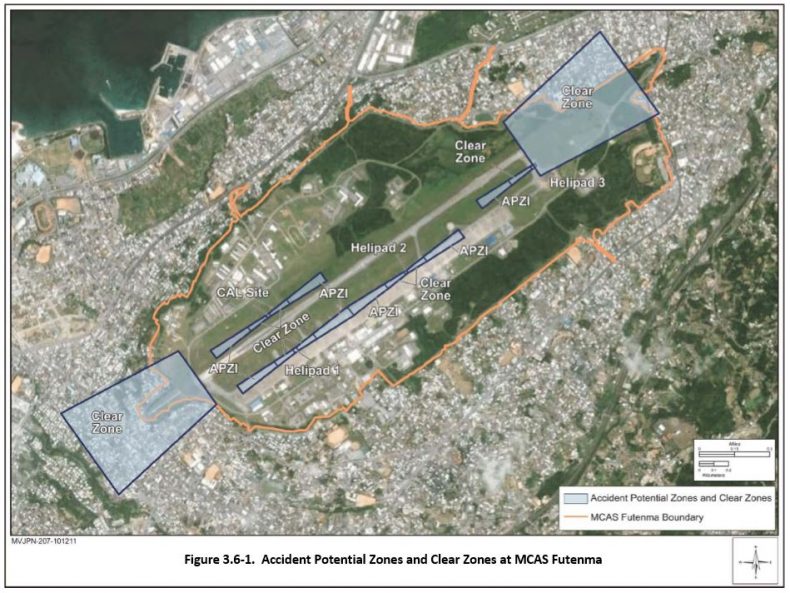 None of this is unknown to the Marines who work in MCAS Futenma, or to the people in the Department of the Navy who oversee it. On the contrary, it was after assessing these dangers – and the threat they posed to the entire U.S. military presence in Okinawa — that the U.S.-Japan Special Action Committee on Okinawa (SACO)  announced in 1996 that Futenma base be closed down by 2003, on the condition that the military units within it would be relocated somewhere in northern Okinawa. The great bulk of the Okinawan people rejected this condition, demanding that the operation be moved out of Okinawa.

2003 came and went; 2004 saw the terrible crash of a CH 53 Sea Stallion into one of the school buildings on the Okinawa International University’s campus. (If that building hadn’t been there, the pilots might have nursed their helicopter along a couple hundred yards more, and made it back into the base. That no one was killed was blind luck.) Since then another 14 years have passed (making a total 22) and still, at the time of this writing, actual reclamation work – that is, work on the replacement facility itself – has yet to begin.

Aircraft safety is not simply a matter of following regulations.  The dangers are real.  The Navy Department directive distinguishes between two aspects of safety: “the probable impact area if an accident were to occur” and “the probability of an accident occurring.” The area that ought to be a clear zone is a probable impact area both because every aircraft using the runway flies over it, and because they all fly over it at low altitude. But from the standpoint of pilots and crew members, the danger increases if the clear zone is the location of multistory buildings, telephone poles, enterprises that emit smoke, bright light, electromagnetic waves, or parks that attract birds. It is important to remember that by far the greatest number of people killed or wounded in U.S military air accidents are the pilots and crew.

Defenders of MCAS Futenma often say: Well, it was the Okinawans who built their houses next to the base, of their own will. So the danger is their fault.

This ignores the fact that the base was originally built right after the Battle of Okinawa, when the Okinawan people were being held in concentration camps. The military bulldozed the villages and farmlands that were there, expropriated the land, and built the base. It is odd to blame people who were driven out of the area for living nearby. It would also be odd for the military to use this blame-shifting as an excuse for inaction, given that the situation endangers its own personnel – and its own bases.

Fixing blame may be a job for politicians, but not for safety officers. Neither trying to “turn the clock back” by razing all the construction inside the clear zones, nor waiting, fingers crossed, for the replacement facility to be built at Henoko in northern Okinawa (which will not be completed for decades, if ever) is a solution. MCAS Futenma is, from a safety standpoint, untenable, and there is no way to remedy this. Calling it “an accident looking for a place to happen” is inaccurate, because the place is already known, and the accidents are already happening.

Helicopter parts are regularly falling into residential areas – most recently on December 13, when a window from a helicopter dropped into the playground of Futenma Daini Elementary School (located in the base’s pseudo clear zone); just six days earlier a smaller helicopter part landed on the roof of a daycare center (also within the pseudo clear zone). Again blind luck prevailed and no one was injured, but at the elementary school the students are now doing evacuation drills just in case. This is all in the context of a steady stream of accidents, not all directly connected with the clear zone problem but very much in the forefront of Okinawan people’s consciousness: the Futenma based C-53 that went down in flames in a farmer’s field last October, the Kadena based F-35A that dropped a panel into the sea the following November, the Futenma based MV22 Osprey that went down in the sea in December 2016 – the list is long.

Now it is just a matter of waiting for The Big One, that being the accident that drives the U.S. military out of Okinawa altogether. Gambling that no such accident will happen over the next 20 or more years is wildly unrealistic – and amounts to gambling with the lives of both Okinawans and young Marines. As for being driven out, those who say, “Oh, the Okinawans will never do that” are giving too much weight to the opinions of people whose livelihood depends on the U.S. military, now a small minority (though of course a majority inside the bases).

Remember it was to avert that danger that the SACO strategy was originally agreed upon – though it is not going at all well. The smart thing will be to shut down MCAS Futenma now.

This article is based on research carried out by architect Yoshikazu Makishi.

Okinawa’s Base Referendum and the Rocky Way Forward

By Temo Dias and Hina Murayama

A controversial new U.S. base faces a double blow: a referendum defeat and an uphill construction battle.

In the latest twist in the Futenma relocation saga, Tokyo and Okinawa have shelved their court cases.

Okinawa Governor Asks Tokyo, US to Rethink Base Relocation Plan

Denny Tamaki met with Prime Minister Abe and the U.S. embassy after a recent referendum rejecting a new U.S. base.