Porpoises are a group of small toothed whales that are closely related to oceanic dolphins, yet with shorter beaks and spade-shaped teeth.

One species of porpoise, Neophocaena phocaenoides, is finless and mostly found along the Indo-Pacific coast. A subgroup of these finless porpoises even live in China’s Yangtze River and large lakes nearby, such as Dongting Lake and Boyang Lake. This is the only subspecies of porpoises that lives in freshwater.

These animals are called “river swine” in Chinese, and they do bear some resemblance to pigs with their bulbous heads and comparatively flat backs.

Since time immemorial, the Chinese have lived with finless porpoises in harmony. Porpoises were often worshipped as river goddesses by fishermen, as they seemed to be able to know the weather beforehand. People believed that seeing a Yangtze River porpoise was a good omen that foretold a peaceful trip. However, the process of industrialization has reshaped China’s whole landscape in an unthinkably short period of time. The comparatively peaceful life of cetaceans in China is now shattered thoroughly, and the future of finless porpoises is in jeopardy. 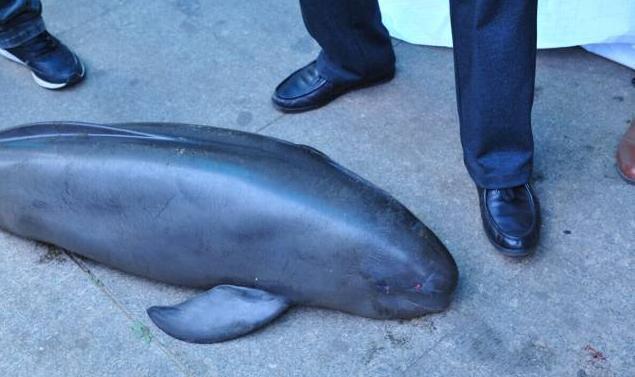 A photo of a dead saltwater finless porpoise, shared on Chinese social media.

The problem is decades in the making. Although most scientists believe the population of cetaceans started to decrease after the 1950s, in 1980 there was still a population of 500 baiji or Chinese river dolphins in the Yangtze River and thousands of finless porpoises in the rivers and in the coastal waters of the East China Sea. Yet starting from the 1980s, industrialization has led to the overuse of waterways, water and soil pollution and the overexploitation of water resources. At the same time, fossil fuel-powered fishing vessels together with a booming market for fish consumption resulted in the rapid depletion of wild fish resources, depriving both the river and coastal cetacean populations of their food sources.

In 1993, there were around 2,700 finless porpoises in the Yangtze River. In the mid-1990s, however, people began to notice a significant decrease in the cetacean population in the Yangtze River. In particular, the number of baiji dolphins spotted dropped to less than 100. Several conservational measures were proposed in meetings held by environmental protection agencies and researchers attempted to implement some of these measures in cooperation with local governments. Yet there were no meaningful results. For example, an attempt to relocate baiji dolphins ended up only relocating one baiji to a reserve – where it died after several months.

By the 2000s, there had been no formal or informal report of baiji dolphins in the Yangtze River for several years. A survey carried out in 2006 verified this unique species’ final demise. Thankfully, finless porpoises were still frequently seen on the surface of the river, although their population was estimated to be less than 2,000 at the time.

Yet following the extinction of the baiji, the fate of finless porpoises in China will be no better if no significant conservational attempts are made. 2006 was also the year that the Three Gorges Dam project was finally finished, cutting thousands of fish species off from their breeding sites. The rapid decrease in the fish population in the Yangtze River since the establishment of the Three Gorges Dam seems to have led to a famine among finless porpoises; many porpoises were washed ashore in the following year and they were found to have empty stomachs, suggesting they starved to death. Finless porpoises are also hunted by humans and affected by other anthropogenic factors such as environmental pollution.

The dire situation of finless porpoises in the Yangtze River has attracted the attention of many conservation organizations, including WWF. A relocation program for finless porpoises was again carried out, with comparatively more success that the earlier attempt with the baiji:  a group of about 80 adults were relocated into the new habitat and around 10 baby porpoises have been born each year. Yet if no effective measures are taken to improve their living environment in the Yangtze River, the wild population will surely die out within five to 10 years, as their numbers are estimated to be decreasing at a rate of around 6.4 percent every year.

There are currently several organizations in China that aim to investigate and protect finless porpoises. The major obstacle faced by these organizations is that local governments are reluctant to stop any of the ongoing projects threatening the porpoises’ living space. “All the local governments care about is GDP and the wild population of porpoises has just no hope,” said one officer in the Institute of Zoology at the Chinese Academy of Sciences.

One piece of good news came in 2017 when China’s Ministry of Agriculture classified the Yangtze River finless porpoise as a “National First Grade Key Protected Wild Animal,” which is the highest level of protection a wild animal species can get in China.

Born in Shandong province as the daughter of a seaman for a local oil company, Zengying Ren cultivated a love of wetlands, the sea, and wildlife since childhood. Although she graduated with the highest grades in college, Ren soon found that she was alienated by her colleagues as the only woman in the oil company. She turned her attention instead to bird watching and hiking. Through her close interactions with nature, Ren was not only taken by the wondrous beauty of it, but also shocked by the scale and speed with which humans were reshaping of nature. She then decided to take action to guard the wildlife she loved.

Saltwater finless porpoises are also under constant pressure from human fishing. Perhaps because of their questionable protection status, the local offices of fishery management apparently are doing little to stop the capture and trade of the saltwater population. 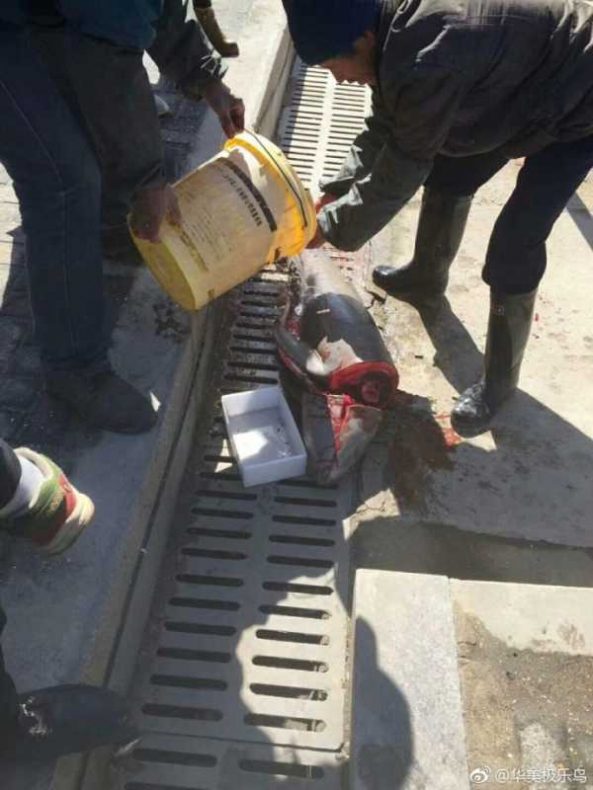 The photo of a slaughtered saltwater finless porpoise that was posted on Weibo.

Recently, a Weibo user posted a photo of a group of men rinsing the carved up body parts of a finless porpoise along the road of a fish market in Weihai, Shandong. The official account of local fishery management office replied: “This is a photo of a ‘shore swine’ (the local name for a saltwater finless porpoise), not a ‘Yangtze finless porpoise.’ Therefore the ‘shore swine’ is not enlisted for protection; thus is totally okay to be sold and cooked at the market.” The reply was posted online by the reporter and quickly received thousands of criticisms from angry porpoise lovers on the platform.

The National Office of Fishery Management later confirmed that the victim was indeed a finless porpoise and the local fishery office in Weihai revoked their claim. However, this frustrating case showed both the threat to finless porpoises from human capture and the hopelessly careless attitude from local fishery management offices in the cities along the coast where most of these highly intelligent animals live.

Na Zhang is a Ph.D. candidate at Arizona State University.

China Fires Back at US Over Environment, South China Sea

The war of words comes amid disputes over trade, technology, Hong Kong and Taiwan, spying accusations and more that has driven the bilateral relationship to its lowest point in decades.

Wuhan residents protested the construction of a waste-to-energy plant, repeating a pattern seen elsewhere in China in recent years.

China’s ban will not be enough to save the world's elephants if it does not address its booming illegal ivory trade.

Can China Be the Saving Grace at COP24?

Beijing’s capacity – and willingness – to lead on climate change are being tested.