KABUL — Reports about Afghan Taliban safe havens on Pakistani soil are abundant and such refuges are seen as crucial for the militants’ ability to sustain their insurgency inside Afghanistan. What is often overlooked is that some extremist groups, like the Tehrik-e-Taliban Pakistan (TTP), do the same, but in reverse – seeking shelter on the Afghan side of the border (which Kabul does not officially recognize) to launch assaults on the Pakistani side.

While Pakistani officials have been making such accusations for years, they – unlike the allegations from Afghan and U.S. officials regarding Afghan insurgents hiding out on Pakistani soil – never really gained much traction or attention.

That these Pakistani assertions are not smoke and mirrors was recently confirmed though. On March 7 a U.S. drone struck a TTP camp in the eastern Afghan province of Kunar, close to the Pakistani border. The attack killed at least 20 TTP fighters, among them Abdullah, the son of the movement’s leader, Mullah Fazlullah, as a TTP statement sent to Pakistani media acknowledged.

Prior to that, an Afghan militant, who cooperates with TTP elements and goes by the nom de guerre of Qari Saifullah, stated in an exclusive interview that the later targeted TTP group consisting of Pakistani (many from the Swat valley) and Afghan fighters was residing in the remote Chawgam area in Kunar’s Shigal Wa Sheltan district. He also confirmed that the drone strike took place in the said area and had caused considerable casualties. The group is led by Ustod Fateh, and, before the drone strike, had staged cross-border incursions at least every month or so, in particular into the Pakistani tribal agency of Bajaur, Saifullah added. While such incidents are not always picked up by media, one attack on a Pakistani Army outpost in Bajaur, that was, according to Saifullah, conducted by this group, was reported by Reuters in mid-November 2017.

The presence of a TTP group led by Fateh in Kunar was also separately confirmed by two other sources. One – a local, who until recently served in the Afghan Border Police in Kunar – indicated there are about 200 to 300 TTP fighters in Chawgam. In the whole province of Kunar, there are about 2,000 TTP militants, he alleged. Given that locals often inflate numbers, though, these figures should be taken with a salt of grain.

The second very knowledgeable source, who requested anonymity because of the delicacy of the matter, identified Fateh (which is an alias) as Umer Rehman, the TTP’s military commander for the Malakand Division (a now-abolished administrative division of Pakistan’s Khyber Pakhtunkhwa province, including Swat district) – the exact same position that Saifullah attributed to Fateh, who hails from Swat. The source also confirmed Fateh’s whereabouts in Kunar. The fact that Fateh is a rather obscure mid-level commander lends all the more weight to the detailed identifications and localizations of Fateh by two separate sources.

The same source also provided information that linked Fateh to a suicide bomber, who on February 3 blew himself up in the Swat valley, claiming the lives of at least 11 Pakistani Army soldiers. 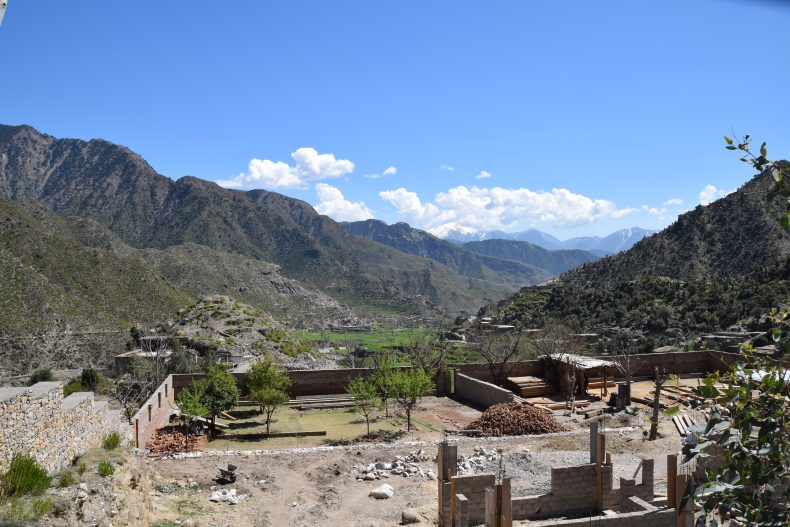 View down the Shigal valley toward Pakistan, which lies behind the snow capped mountain range on the horizon; Chawgam, where on March 7, 2018 a U.S. drone struck a TTP camp, also lies in the immediate vicinity of this mountain range (March 2017). Image by Franz J. Marty.

Whether the March 7 U.S. drone strike has crippled or eliminated the said TTP group’s presence in Chawgam could not be determined. But even if that would be the case, this would not be the end of the group’s presence in Kunar. Some time before the strike, considerable numbers of the group in question, among them apparently also Ustod Fateh, relocated to another hideout in the mountains of the neighboring Ghaziabad district, farther away from the border. This was confirmed by a source, who in February visited a militant gathering there.

This said, Pakistani allegations that the Research & Analysis Wing (RAW), the Indian intelligence service, nurtures the mentioned TTP group as well as others via the Afghan intelligence service, the National Directorate of Security (NDS), could not be confirmed. Saifullah outright denied any Indian involvement and insisted that the Afghan government likewise does not provide any support to Fateh’s TTP group. However, some local Afghan government officials turn a blind eye to the militants, Saifullah alleged, by, for example, not hindering their crossing into Pakistan. At least one other source however claimed that local Afghan officials do more and support such TTP groups with money and weapons. None of the above could be verified. In general, allegations of involvement of intelligence services should be treated with suspicion, especially in this part of the world which is rife with conspiracy theories.

In any event, the presence of TTP fighters like Fateh’s men is apparently the reason for the sporadic shelling of Afghan soil by the Pakistani Army. Afghan officials denounce such shelling as blatant violations of their country’s sovereignty and insist that thousands of Pakistani “rockets” (probably also referring to mortar shells) are being fired indiscriminately, hitting civilian houses. Pakistan on the other hand seemingly sees this as a necessary retaliation, but the government hardly, if at all, publicly addresses such shelling. Although details of the shelling could not be independently corroborated, the fact that Afghan officials – despite asserting barrages of thousand of rockets during the past six months – only indicate a mere handful of Afghan casualties raises doubts about the Afghan account of the extent of the shelling.

Be that as it may, the above clearly shows that cross-border violent extremism not only threatens Afghanistan, but also Pakistan. However, reciprocal accusations that the other country does not act decisively enough against insurgents on its soil that threaten the other side of the border — as well as the generally tense Afghan-Pakistani relationship — so far has prevented the effective cooperation that would be necessary to counter such cross-border menaces.

In fairness, one could well argue though that neither Afghanistan nor Pakistan, with or without cooperation from the other, would be capable of rooting out every terrorist hide-out in the region. The 2,670 km long Afghan-Pakistani border is not only extensive, but covers extremely remote areas, which are prone to insurgency and have never been effectively governed.

Franz J. Marty is a freelance journalist based in Afghanistan. He writes on a broad range of topics, but focuses on security and military issues. Follow him on Twitter: @franzjmarty

Pakistan is building a wall along its border with Afghanistan. Will it actually make the country safer?

The TTP has called for attacks on Pakistani leaders while the Taliban in Kabul push back against Pakistani accusations of Afghanistan harboring terrorists.