Last week, Chinese state media announced that the PLA Navy would be conducting live-fire drill in the Taiwan Strait on Wednesday, April 18. Despite hype by Chinese media outlets and some threat-inflation by western reporting, the drills will take place in a geographically limited area within Chinese territory, suggesting that China desires to only appear provocative without actually risking a crisis or cross-strait escalation.

The announcement came at the close of a major fleet review in the South China Sea overseen by Chinese President Xi Jinping and involving thousands of personnel, over 40 ships and submarines, and dozens of aircraft. A massive Chinese naval exercise revealed by satellite photographs in late March now appears to have been a rehearsal for the parade of ships, submarines, and aircraft on display last week.

Many non-Chinese news outlets and analysts called the announced drill a “show of force,” a warning to Taiwan and the United States, and highlighted rising Sino-U.S. and cross-strait tensions.

Chinese media encouraged the impression that China was acting out of strength and disregarding cross-strait risks. The Global Times, an official tabloid, stoked rhetoric around the drills, claiming they were a ”a check”  against Taiwan pursuing independence, and designed to highlight China’s strength to deter the island and warn the United States. Editorials and reporting in the South China Morning Post echoed the warnings against Taiwan (though also Taiwan’s dismissal of those threats).

By contrast, media and officials in Taiwan, the target of the drills and Chinese media hype, have been muted and dismissive of the drills. Taiwan News called China’s announcement “bluster and bravado,” explaining that the drill’s size and location made it relatively innocuous. Multiple Taiwanese security officials downplayed the significance of China’s drills to the Taipei Times, saying they would involve only a battalion of troops, didn’t appear to be targeting a particular Taiwanese city or party, and that the Taiwanese military was not going on any kind of alert. One former official said the Chinese media was trying to play-up the drills as a form of “psychological warfare” to mask the drill’s relative innocuousness compared to the extensive drills and demonstrations China undertook during the Taiwan Strait crisis.

Chinese media released few concrete details on the drills, but a marine safety notification from the Fujian district of China’s Maritime Safety Administration laid out the geographic limits of the exercise. The notice announced an exclusion zone for all vessels to keep out of for the duration of the exercise, between eight a.m. and midnight on Wednesday April 18th. The coordinates provided place the exclusion zone just outside the mouth of Quanzhou Bay, with dimensions about 5 miles wide and 10 miles long, and importantly, is entirely within China’s territorial waters, which extend twelve nautical miles from its coastline. 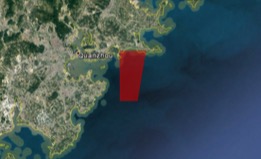 The exclusion zone also abuts a long stretch of protected beach, which along with its size, suggests that the scale of the exercise will be limited, and is consistent with reports from the Global Times that the drills would include a battalion-sized amphibious landing and some strikes. The zone’s location outside the international waters of the Taiwan Strait proper indicates that China wanted to avoid any appearance that it was threatening or infringing on the strait, media impressions to the contrary. At that latitude, the Taiwan Strait is more than 90 nautical miles wide.

It will be significant whether the amphibious portion of the drill is conducted by the PLA Navy Marines or by PLA Army troops. The U.S. Department of Defense, in its most recent report on China’s military advances, assesses that China’s Marines are more likely to be tasked with small-island operations in the South or East China Seas, while the PLA Army’s amphibious capabilities are likely targeted at a potential operation against Taiwan. If Wednesday’s drill is conducted by PLA Navy Marines, it would be an additional sign that China was being careful to minimize the risk of actual military provocation. Even if it is conducted by the PLA Army, the limited scale poses little operational concern. The disparity between the reality of China’s live fire drill and the public impression it has cultivated suggests China has significant risk aversion that is at-odds with its desire to coerce and intimidate its regional neighbors.

Taiwan will conduct its own military exercises this week, including live-fire artillery drills on Kinmen, a Taiwanese-occupied island only 5 or 6 nautical miles off the Chinese mainland, and about thirty miles southwest of the site of China’s drills in Quanzhou bay. Kinmen is home to batteries of massive 240-millimeter coastal artillery capable of shelling the surrounding Chinese city of Xiamen.

This marks another important step in the Chinese Navy’s ambitious aircraft carrier program.

The latest Type 056A corvette reportedly entered service on December 31.