From Delay to Desperation: The Story of Sinophobia and COVID-19 Vaccines in Vietnam

The Indians Still Stranded in Afghanistan

Traditions are rituals that symbolize some element of its culture’s values, but what happens to these traditions as time passes and ideals begin to change? In post-Soviet Kyrgyzstan, some feel compelled to re-evaluate the traditions and rituals rooted in the ideals of the past as they redefine the relationship between their cultural and religious identities.

Islam and Kyrgyz culture are intertwined; before Russian involvement, Sufi Islam was widely practiced in Kyrgyzstan. Since Sufism focuses on the spiritual and mystical aspects of Islam more than the materializations of Islam on society and the law, this type of Islam was harmonious with pre-existing beliefs found within the philosophies of Tengriism and quickly found its way into Kyrgyz customs and traditions. However, the Soviet Union impacted the role Islam played in Kyrgyz society by enforcing state-mandated atheism, which reduced Islam to the private sphere and made access to educational material about Islam nearly impossible. After the dissolution of the Soviet Union, Islam made its way once again to the public realm, bringing with it cause for some people to re-examine traditions that seem to collide with Islamic principles. 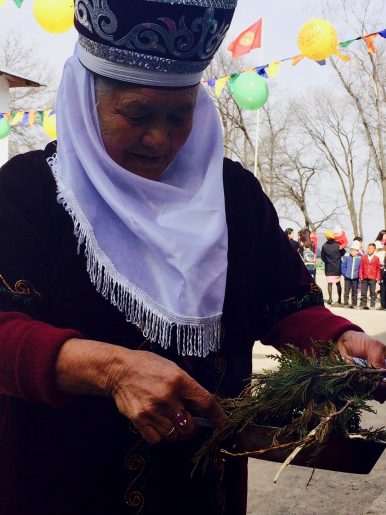 A community elder at a Nooruz celebration burning juniper before festivities begin. Photo by Toby A. Cox

When talking with people about how they balance their cultural and religious identities, the topic of holidays is usually the first to come up. Many Muslims around the world do not celebrate holidays that are not Islamic, including birthdays and other cultural holidays that celebrate something or someone other than Allah (God). In Kyrgyzstan, the most debated holiday is Nooruz (also spelled Nowruz) – the Persian New Year that falls on the day of the vernal equinox.

Nooruz is a tradition that comes from Zoroastrianism, an ancient religion and a close relative of Tengriism, both finding their roots in shamanism. Both Zoroastrianism and Tengriism recognize the importance of nature and natural elements, especially water and fire. In present-day Kyrgyzstan, Nooruz has become “paganized” and is celebrated without explicit reference to its Zoroastrian roots.

Viewed as a day to spend with the community, festivals take place all around Kyrgyzstan, in villages and cities alike to welcome to coming of spring through traditional music, dance, games, and rituals that some consider contradictory to Islamic principles. The two rituals most often contested are the burning of juniper and the act of praying over sumolok, Kyrgyzstan’s variation of a sweet grain-based pudding that is prepared specifically for Nooruz.

In Kyrgyzstan, burning juniper is a common practice in households and during festivals. During Nooruz celebrations, an elder female community member will walk around the crowd of people holding a pan of smoldering juniper branches saying blessings and prayers for the new year. In shamanism, fire is believed to be a purifying element and juniper is believed to have spiritual properties. This tradition is sometimes viewed as an extension of fire worship, which is forbidden in Islam.

“In our history, we celebrated spring and our ancestors prayed to the sun and nature, but in Islam, we should only pray to God, not to the sun or to nature. Therefore, this celebration is forbidden in Islam,” explained Uulai, a student studying at a university in Bishkek. 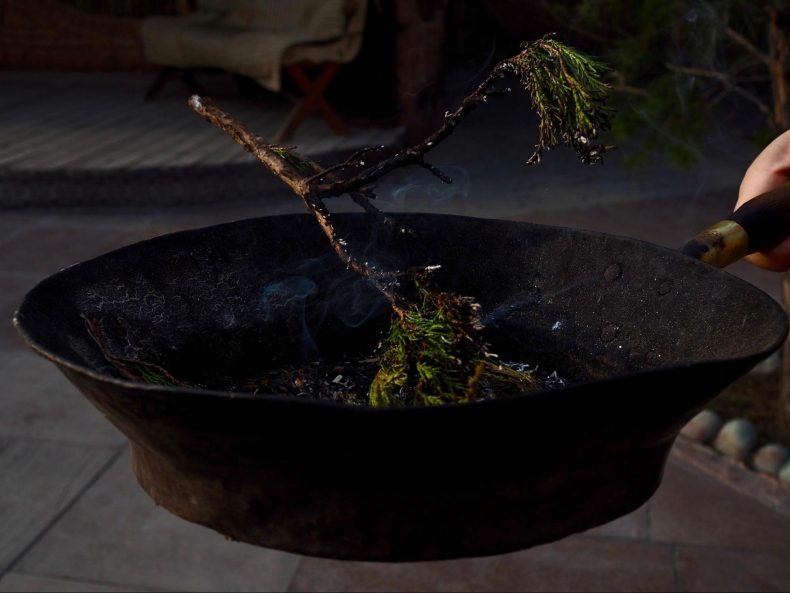 Some of the rituals surrounding sumolok are also considered to collide with Islam. Although the ingredients of sumolok are simple (germinated wheat and water), the process of making sumolok is a laborious and time-consuming process, requiring a full 24 hours of constant stirring and the effort of the entire community. People will gather the day before Nooruz to begin cooking the sumolok, staying up through the night talking, socializing, and ensuring that the large cauldrons of sumolok will be ready before Nooruz festivities begin. When it is ready to be eaten, it is presented by a community elder, who “blesses” the sumolok by stating wishes for the upcoming year into the cauldron. This act of praying over the sumolok is one of the many traditions associated with Nooruz that some believe clash with their religious identity. 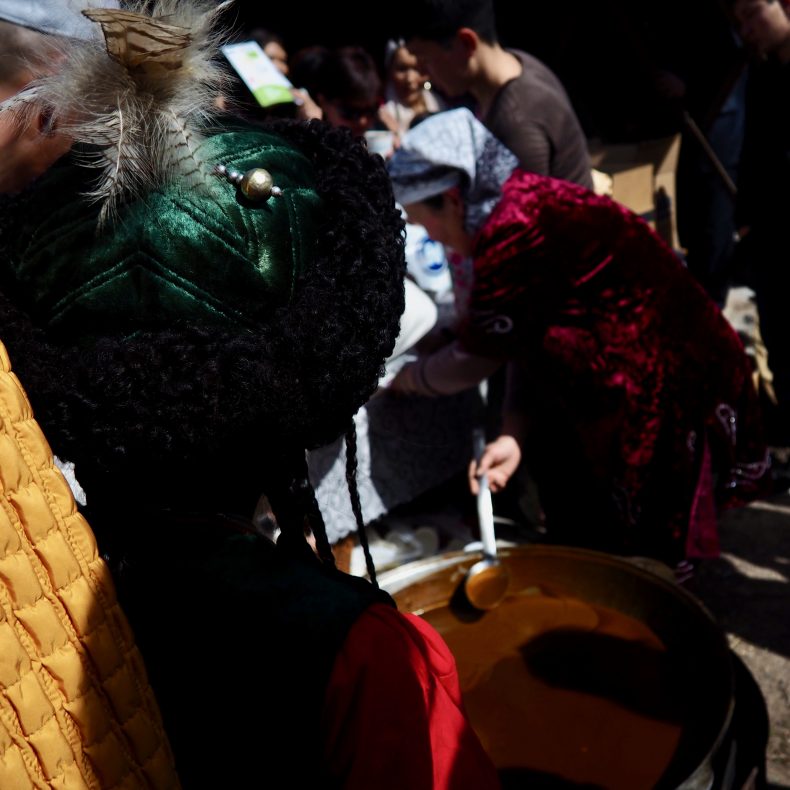 A young girl waiting in line for sumolok after it was blessed. Photo by Toby A. Cox

“I don’t celebrate Nooruz even though I did in the past. Every year in my village, people come together to make sumolok and my parents still celebrate in this way. But, I know about the history of Nooruz and this is not a Muslim holiday and, therefore, I decided to not celebrate it,” said Uulai, who also said that whether to celebrate Nooruz or not should be, and is, a personal choice.

Some Kyrgyz who identify as Muslim believe that Nooruz collides with Muslim values, but the vast majority still celebrate anyway. Some who are devout in their practice of Islam may choose not to celebrate it, while some may accept it as part of Kyrgyz culture, but not participate in the rituals they believe contradict their religious beliefs.

“I accept Nooruz as a traditional holiday. To me, it’s just one more good day, when we can contact our relatives and friends and wish them happiness and good health,” explained Myrzaiym, a university student.

Once located on the iconic Silk Road, Kyrgyzstan still finds itself at a crossroads of ideas and influences, making its religious landscape difficult to navigate, especially for young Kyrgyz who are trying to figure out what it means to be both Kyrgyz and Muslim. Usually the two identities are harmonious, but sometimes it requires an evaluation of the traditions and customs that collide with religious values, resulting in a sort of identity acrobatics. 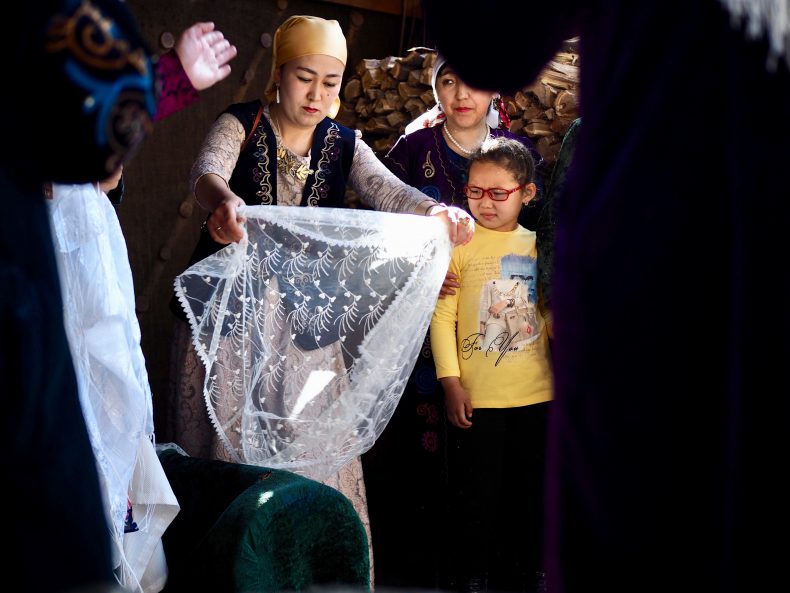 Symbolizing new beginnings, Nooruz is a time where the community celebrates a newborn child by putting him or her into a beshik, a traditional Kyrgyz cradleboard. Photo by Toby A. Cox

Toby A. Cox is currently a Fulbright-National Geographic Digital Storytelling Fellow living in Bishkek exploring the story of religious identity in Kyrgyzstan. The views and opinions expressed in this article are the author’s alone and do not reflect those of the Fulbright program, U.S government, or National Geographic Society.

“The mass surveillance and internment project in Xinjiang should be viewed as a major test of Chinese capacities to conduct a sophisticated invasion, occupation, and transformation of spaces that were at the margins of Chinese control.”

By Toby A. Cox

Kyrgyz authorities profess a separation of state and religion while also paradoxically preferring one version of Islam.

The Kyrgyz Baptists: A Case Study in Religious Persecution in Central Asia

The troubling treatment of converted Baptists highlights the growing problem of radicalization in Central Asia.

How to Fight ISIS Messaging in Central Asia? Religious Freedom

In a recent discussion, Noah Tucker argues that religious freedom--as a policy--is simply the best counter to ISIS messaging efforts.

By Zachary Abuza and Phuong Vu

Although Vietnam's Chinese debt burden is low compared to some of its neighbors, it is still a worry for the Communist Party mandarins in Hanoi.

The situation of technical interns in Japan was already hard. For many, the situation has now become desperate.

How Will Japan’s Cybersecurity Posture Impact its Relations With China?

Negotiating With the Taliban After Their Victory

The Taliban are an unfortunate reality and arriving at a stable post-conflict society is not going to be a simple task.

By Markus Bell and Sarah A. Son

Like any refugees, North Koreans who escape to the South have a deep-seated need to remember their home country. But the scope for memory and self-expression is limited by politics.

The current effort – including AUKUS and the Quad – is missing three critical ingredients compared to early efforts in Cold War Europe.