When Asia’s youngest nation heads to the polls for the second time in a year on May 12, Abel Da Costa just wants someone to win. Da Costa, 66, is a school teacher in Manleuana, a quickly growing neighborhood at the edge of Dili, the nation’s capital. His four-classroom school hosts 2,170 students and is in dire need of an expansion or a second building. The problem is, there is no one to ask.

“We have a proposal ready,” he says. “We are just waiting for a stable government so we can ask them for help.”

The parliamentary elections last July, meant to create a five-year government, ended in deadlock. Fretilin, the former guerilla movement that became a political party after Timor-Leste gained independence in 2002, had the most votes at 29.7 percent, beating out rival CNRT by about a thousand votes or 0.02 percent. Fretilin formed a minority government with a smaller party but were not able to pass a budget. In December, the minority government collapsed and the president called for new elections. Ever since, the government has been operating at reduced capacity and many projects have been put on hold pending the formation of a stable government.

Da Costa has been paid because salary and wages are covered under the emergency budget that kicked in when none was passed. However, there is no funding for projects, such as building a new school in a rapidly growing suburb during a post-independence baby boom. 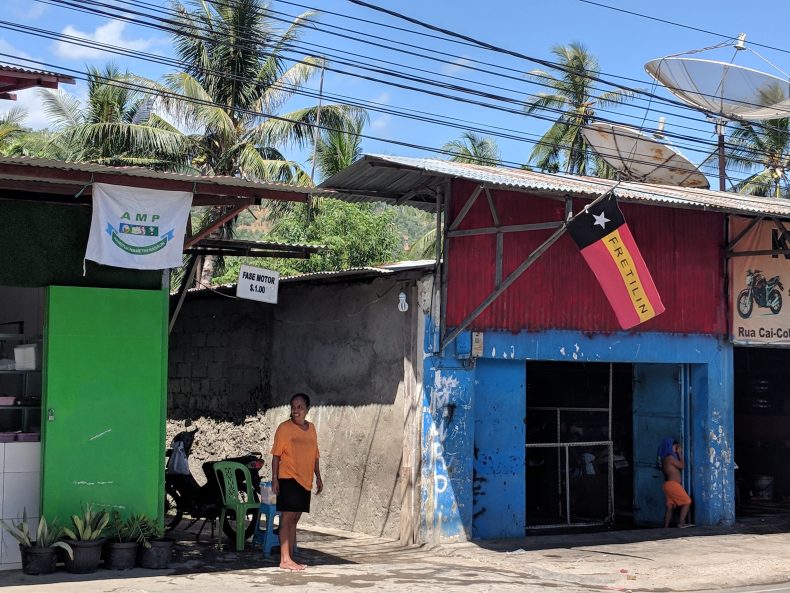 Neighboring shops in Dili, one flying the flag of Fretilin, the other of AMP. Photo by John Dennehy

Even people whose employment is secure are affected. Brigida Soares, 37, continues to work in the Prime Minister’s office, and while development targets will have to be pushed back because of delays this year, her salary is safe. Her husband, however, who had worked as an adviser for the government, is out of a job. Nearly every adviser or government contractor is. “We try to save money wherever we can now,” Soares explains. The couple has one child and is raising two more in their home. “We cook our own food much more now, and eat more vegetable and less meat.”

Kym-Louise Miller, 50, is from Australia but has lived in Timor-Leste since the waning days of the Indonesian occupation in 1999. She has an adopted son and had been running a hotel and café. When the business moved to a new location last month, she decided to hold off reopening the café. “Most of our clients were Timorese advisers and contractors,” she explained, “and after the election we lost about 70 percent of the business.” Miller says she’s talked to clients who used to be regulars and many were now out of work, or had family out of work and were trying to save as much as they could and eating lunch out had become a luxury. She’d like to reopen the café, but is waiting until after the election to decide.

The hotel also had a lot of Timorese guests. About 20 bed nights a month came from government or NGO employees who were based in the districts but had to stay overnight in the capital for work. Those 20 bed nights a month have dropped to zero. “Some of them are probably out of work now, others are staying with extended family,” Miller suggests. 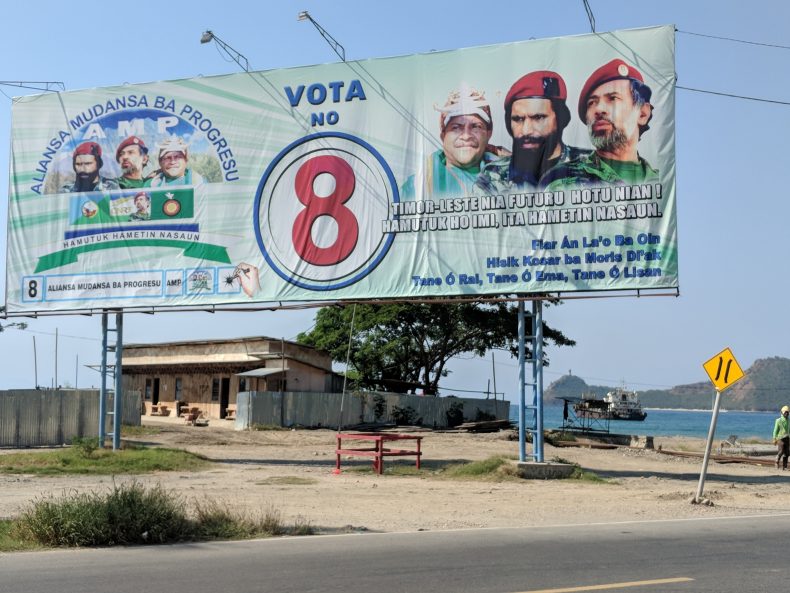 Besides delayed projects and advisers and contractors out of work, people are also preparing for the worst. A deadly political crisis gripped the young nation in 2006 and continued into a disputed 2007 election. While nearly everyone on the streets of Dili today believes that the election will go smoothly, the memory of the last political crisis turning violent is still fresh and people are hedging their bets by saving money and hoarding basic supplies. “We have extra rice and cooking oil stored at home,” says Soares. “And we are trying to save as much as we can in case things get worse.”

There are signs of the upcoming election on every street in the capital. Hanging from doorways and perched on rooftops, supporters have staked the flag of their party. After the worst of the tropical heat has passed each afternoon, groups of motorcycles and pickup trucks of human cargo parade through the streets beeping their horns and waving the same flags. The familiar black and red of Fretelin stickers are plastered on road signs and walls. Their main rival, AMP, is a new coalition of parties including the CNRT and doesn’t have familiar logos to compete. They have Xanana Gusmão, though. The face of the former guerrilla commander is splashed across billboards and banners, often using old photos of his more militant past, showing him wearing a beard, beret and green military fatigues.

There are physical reminders of the political impasse too. 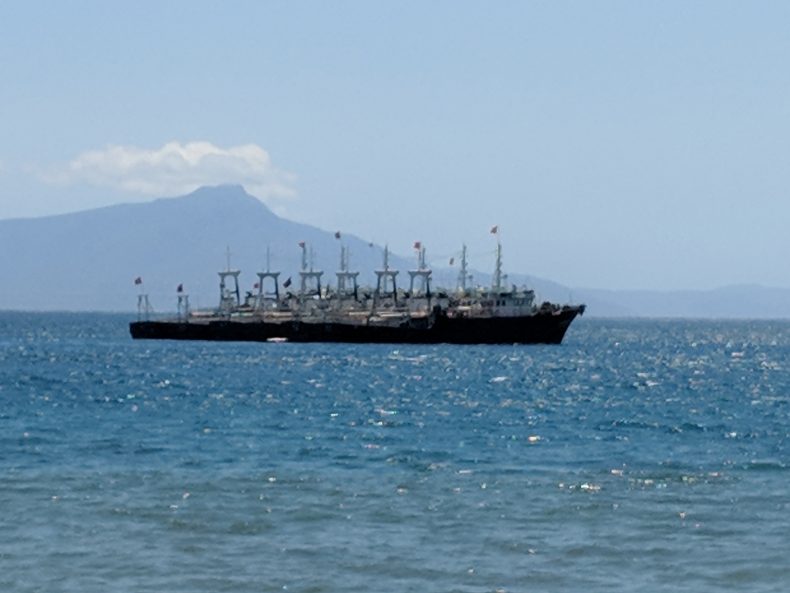 The seized fishing vessels as seen from downtown Dili. Photo by John Dennehy.

Fifteen fishing vessels, tied into groups of five and anchored indefinitely in Dili Harbor, have become a symbol of government slothfulness. The Chinese-owned ships were seized by the Timorese government in October on suspicion of illegal shark fishing, but the final decision of what will be done with them won’t come down until a new government is in place.

Each of the two main parties, both claiming roots in the nation’s struggle for independence, has their own vision for how the young nation should develop, so besides budget restrictions no one is sure which projects will go forward and which will be scrapped.

In the meantime, people are feeling the crunch on the street. 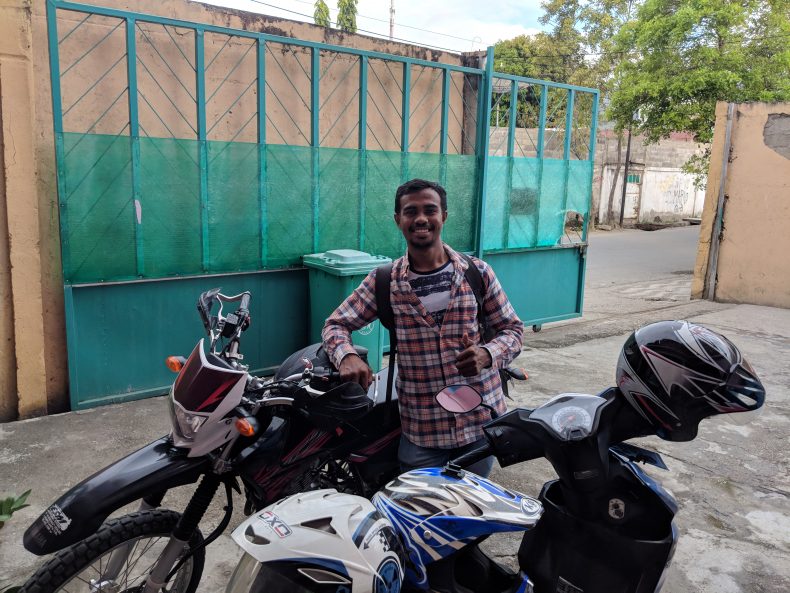 Anastacio Araujo with two of his motorcycles. Photo by John Dennehy.

Anastacio Araujo, 23, was seven when Timor-Leste gained independence. His generation doesn’t remember the independence struggle with as much enthusiasm as the one preceding it, but it is increasingly helping to grow and shape the nation. When Araujo began renting his own motorbike he realized there was demand from locals for short-term rentals. In 2017 he got a loan and started renting out five motorbikes. Business was so good he sold out nearly every day and had to take reservations. “But business started to drop after the last election,” he says. “People don’t travel as much. They don’t have money or don’t want to spend it.”

Araunja has stalled his plans to grow his start-up. “If this situation continues, it will affect business even more. I hope that after this election, that’s it. Whoever wins that will be better than this uncertainty.”

John Dennehy has reported on Asian politics and development for places such as The Guardian and Narratively. He is currently based in Dili, Timor-Leste.

Celebrating Democracy and Peace in Timor-Leste

20 years after its independence referendum, Timor-Leste’s success story has lessons for the region and beyond.

Former President Jose Ramos-Horta will face off against current President Francisco Guterres in a second round of voting on April 19.

Observations From the First Round of Timor-Leste’s Presidential Election

The election is set for a second-round run off on April 19. But what did we learn from the first round of voting?