“In this forward looking state of mind, and in our enthusiasm for urban renewal, we may wake up one day to find our historic monuments either bulldozed or crumbling to dust through neglect. As new Singapore is being built, we must not let the worthwhile part of older Singapore disappear…”

The tiny island of Pulau Ubin has played an important role in some of Singapore’s most iconic buildings and infrastructure projects, which used granite quarried on the island. Yet it also offers glimpses of the former ways of life of the island state’s multiethnic inhabitants and its vanishing “kampongs,” or villages.

Literally “Granite Island” in Malay, the 10 square kilometer Pulau Ubin, one of the 63 islands that make up Singapore, is a refuge for wildlife in a country where rapid development has seen the loss of much of its green spaces. Pulau Ubin’s five former granite quarries, fish farms, and plantations have been reclaimed by nature, and the forests and mangroves now provide opportunities to walk, camp, and mountain bike. It has also supplied much needed jobs.

The farms and granite quarries started to be shuttered in the 1970s — the last quarry closed in 1999 — and less than 100 people now live on Pulau Ubin from a former population of some 2,000 Malay and Chinese workers. With the rise in visitors to the island in recent years, some former residents now commute daily back to Pulau Ubin to work.

“My parents left the island in the 1970s to find work, and better schools for my brother and me,” explained Chang Yi Ling, outside her family’s bicycle rental shop.

“We take the boat here each day. My parents are happy to be back on the island, and I like working here among the nature,” she added.

Visitors arriving on the small bumboats from the jetty at Changi Point are greeted by the sight of trees, old fashioned wooden houses, and hundreds of bicycles for rent.

“Most people who come rent a bicycle to cycle the island and see the lakes, animals, nature and some come to see the shrines,” Chang noted. 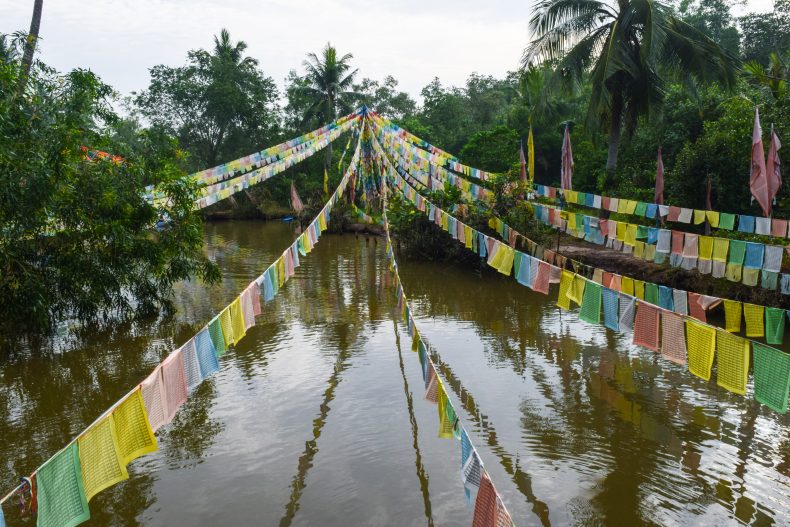 Large-scale shrimp farming was the first to change the landscape, with the required embankments silting up the channels that had separated the five islets into one island — Pulau Ubin. Next came the pineapple, rubber, and jasmine plantations that saw the clear-cutting of island’s forests, and helped expose the granite for quarrying.

“Granite…[was one] of the two commonly-employed materials in the early buildings of Singapore, and indeed, used in the construct of many of its national monuments,” explains Gretchen Liu in In Granite and Chunam: The National Monuments of Singapore.

Many of Singapore’s 34 gazetted national monuments — including 18 mosques, temples, and churches, and eight British colonial institutions — employed granite in their construction, and until 1873 convict labor was used to quarry the stone.

Thian Hock Keng Temple, dedicated to the Chinese sea goddess Mazu, and complete in 1842, makes use of ornate granite throughout its impressive compound. Once on the seafront, substantial land reclamation means it is now some 3 km from the water.

“The use of granite throughout is lavish and imbues the temple with a robust, even rugged, quality,” Liu notes. “There are decorative carved granite wall panels, lintels and posts, granite columns both solid and with sinuous dragons, circular granite windows and delicate floral motifs, sculptures granite scrolls flanking the door openings…several of the memorial plaques are also in granite, while stone lions guard the entrance.”

Granite from Pulau Ubin was used to build Singapore’s first lighthouse, Horsburgh, in 1851, and Raffles Lighthouse in 1855. Granite from the island was also used for the Johor–Singapore Causeway, which linked Malaysia to Singapore’s main island in 1924. During the anti-communist police actions that swept Malaysia, Brunei, and Singapore in the 1970s, the island took on a brief role as detention facility, but since the shuttering of the quarries, the island’s natural importance has come to the fore. 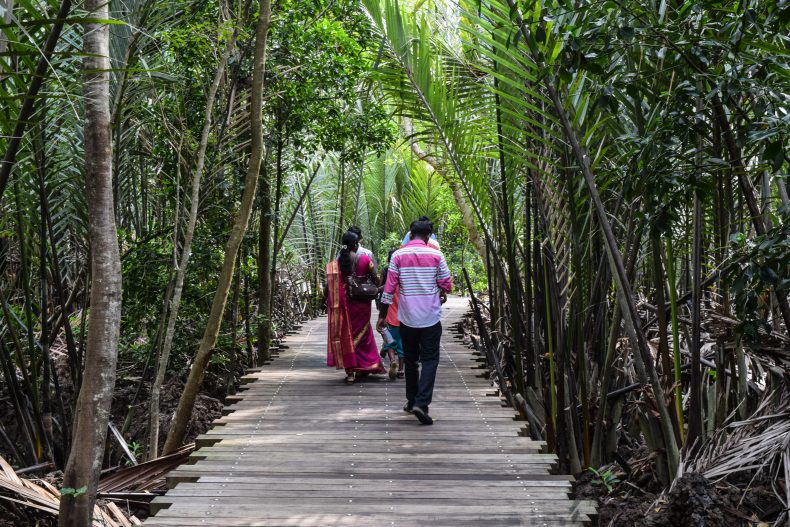 A family walking along one of the wooden walkways in the mangroves on the eastern tip of Pulau Ubin. Photo by Peter Ford.

In 1992, academic Chia Lin Sien noted in Singapore’s Urban Coastal Area that the island was “…the largest tract of undeveloped area accessible to the public for recreation.”

He also highlighted its industrial potential.

“The island of P. Ubin has considerable potential to be more intensively used, providing that its natural endowments and resources are properly managed and the island is developed with a wide range of public facilities.” 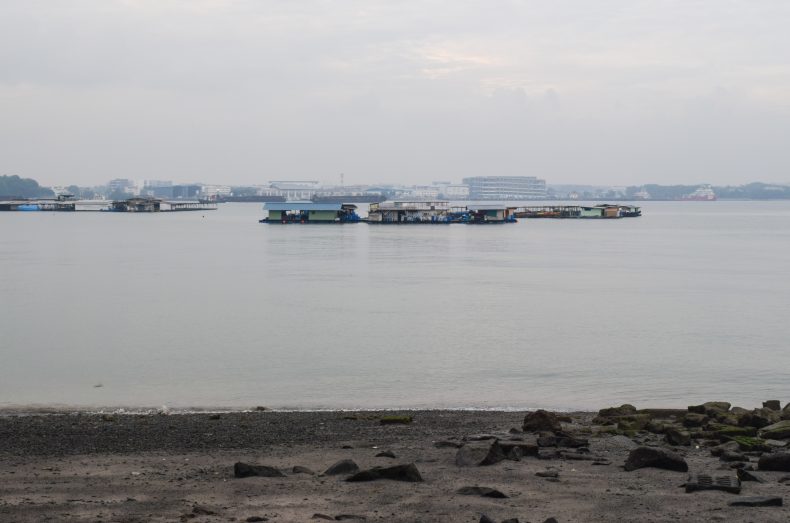 Pulau Ubin’s natural environment seems secure, as while Government plans for the island have fluctuated over the years, current policy is to “keep Ubin a familiar and rustic getaway – a place to reminisce the past and celebrate the present, and to protect for the future,” according to Minister for Social and Family Development Desmond Lee, in the Singapore National Parks publication Ubin Tides.

“We look forward to…enhance and protect this special island for years to come.”

History and nature are both safeguarded in one of the city-state's rare green spaces.

With job losses mounting due to the COVID-19 pandemic, some Singaporeans are blaming Indian nationals.

Singapore is held up as a model of pandemic management, but that success doesn't extend to its migrant workers.

By Jim Gomez and Eileen Ng

After three months of deadlock, the Southeast Asian bloc finally settled on a candidate.

Prime Minister Muhyiddin agreed to subject himself to a motion of confidence when parliament reconvenes next month.

Demands are growing for the Narendra Modi government to come clean on its role in the global snooping scandal.

With the pandemic causing economic devastation, the stage is perfectly set for political crises.