North Korea Is Preparing to Confront the US in 2022

On June 12, Taiwan’s President Tsai Ing-wen joined American officials in Taipei to commemorate the opening of the new American Institute in Taiwan (AIT) — the United States’ de facto embassy in Taiwan in everything but name. Ahead of the event much speculation circulated among Taiwan and China watchers. Would this upset China? Would they object to U.S. Marines stationed at the compound? Would Beijing ramp up its military drills on their side of the Taiwan Strait? Would Trump send any high-ranking officials?

June 12 came and went, and we have the answer: It was business as usual.

The biggest surprise may be how normal the entire process was. China’s military exercises wound down, no one from Trump’s inner circle arrived, and arms trade between the United States and Taiwan continued.

The new compound, which spans nearly 15,000 square meters and is expected to be Leadership in Energy and Environmental Design (LEED) Silver Certified, is a symbol of continued American support for Taiwan’s government, also known as the Republic of China. 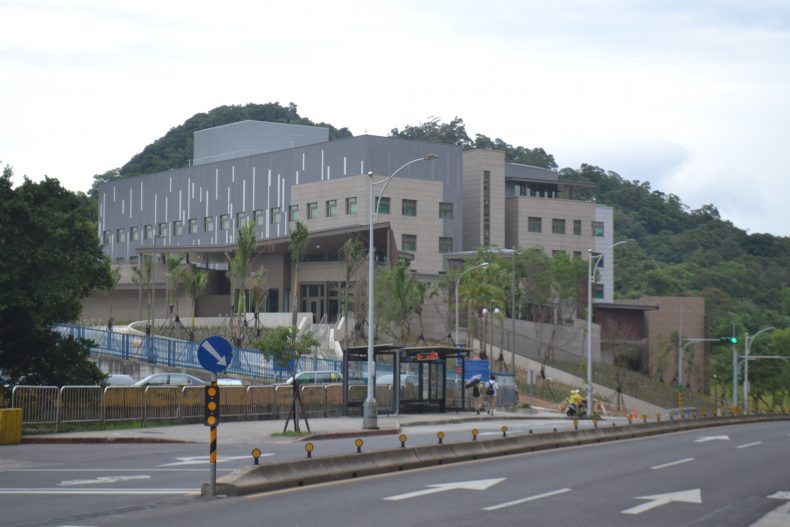 The new AIT office complex, which is still undergoing the final touches of construction. Photo by James X. Morris.

According to an AIT press release, a cadre of American officials and mid-level State Department personnel were on hand for the dedication ceremony. Included among them were Ambassador James Moriarty, chairman of the Board of Trustees of the American Institute in Taiwan; Assistant Secretary of State for Educational and Cultural Affairs Marie Royce; Overseas Buildings Office Principal Deputy Director Ambassador William Moser; and AIT Director Kin W. Moy.

“AIT’s new office complex is a testament to the strong U.S. commitment to Taiwan, the close and cooperative ties between our people, and the enduring friendship between the United States and Taiwan,” Moriarty stated at the dedication ceremony.

A transcript of Tsai’s statements was released by her office, in which she celebrated the continuing strength of American-Taiwan collaboration and friendship.

“As free and open democracies, we have an obligation to work with one another to defend our values and protect our joint interests. As long as we stand together, nothing can come between us,” she stated.

The Republic of China (ROC), the governing authority on Taiwan, evacuated to the island in 1949 as the nationalist government suffered debilitating losses in the Chinese Civil War. From Taipei, the government continued to largely receive global recognition as “China” until the 1970s. In 1971 the ROC was unseated from its position in the United Nations, and Mao Zedong’s People’s Republic of China (PRC) was given recognition.

In 1979 the United States extended diplomatic relations to the PRC, effectively ending its recognition of the ROC. That same year American lawmakers passed the 1979 Taiwan Relations Act in response. Washington was not fully ready to hand Taiwan over to Beijing. As a result, the American embassy was converted into a nonprofit extension of the U.S. Department of State in order to maintain semi-official relations between the governments. 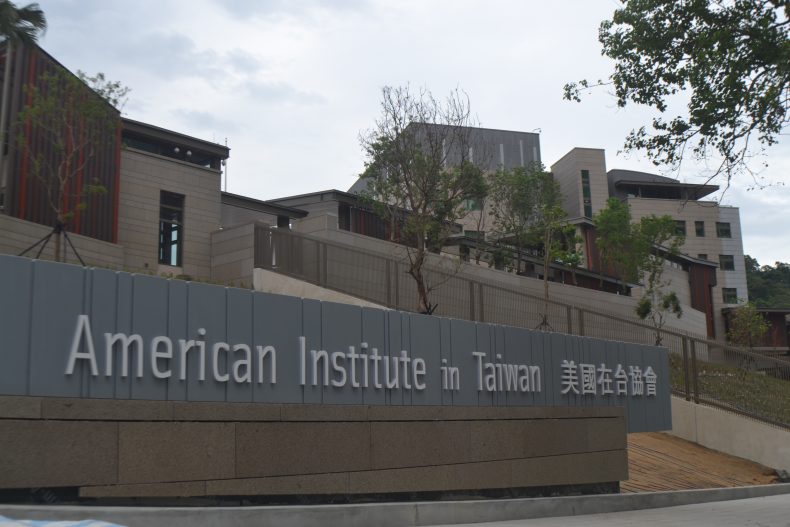 The sign outside the new AIT office complex. Photo by James X. Morris.

The June 12 dedication ceremony was overshadowed by the run-up to the surreal Trump-Kim summit in Singapore, stealing some of the thunder. But the development of the new AIT compound had been in the works since the George W. Bush administration. Beijing had plenty of knowledge in advance that this dedication ceremony would come, and that the status quo wouldn’t change.

Even with the presence of Tsai of the Taiwan independence-leaning Democratic Progressive Party (DPP), overtures regarding Taiwan independence were unlikely. Tsai is pragmatic about cross-strait politics, and it’s beginning to hurt her politically; she has been criticized by DPP supporters in Taiwan for not doing enough for Taiwanese identity.

During his week-long stay in Taiwan, Moriarty stated that the United States had no interest in using Taiwan as a bargaining chip against China, and supported continued efforts for bilateral cross-strait dialogue, commending the Tsai administration’s overtures to Beijing.

American activity with Taiwan always draws protests from Chinese officials, whether it’s a new AIT building, arms sales, or joint military training. This has been the way of things since 1949.

In Taiwan, there is a concern among Taiwanese and foreigners that the status quo is not sustainable for Taiwan. But what will replace it, nobody is predicting. Regardless, it appears the new American compound won’t be a catalyst.

Since 2016, when Tsai and the DPP were swept into power, Beijing has developed a much more aggressive “wait and see” stance on Taiwan unification. Beijing’s pragmatism has been shored up by its confidence in its military. But Beijing’s calm over the new AIT compound reflects one thing: it’s business as usual.

Diplomacy Under Different Rules: How an NGO Dictates American Diplomacy in Taiwan

By Rachel Bernstein and Scott Singer

A primer on the American Institute in Taiwan (AIT), and how it influences the delicate China-Taiwan-U.S. triangle.

The canceled visit by Ambassador Kelly Craft spared Taiwan an enlarged domestic controversy over its handling of the final days of the Trump administration.

Tsai thanked the Taiwanese people for their unity and resilience in containing the COVID-19 outbreak and offered to engage in dialogue with Beijing.

Taiwan has become the most dangerous flashpoint in U.S.-China relations.

Technological limitations on Manila’s end will limit the missile’s range – and its deterrent factor.

North Korea Is Preparing to Confront the US in 2022

Kim Jong Un will likely conduct more advanced weapons tests this year in his own version of “maximum pressure.”

By Shrey Khanna and Aditya Pareek

In the mindscape of the U.S. strategic community, China now enjoys the position which the Soviet Union had during the Cold War. Moscow is keen to disrupt that emerging bipolar order.

For Love of Urdu: Language and the Legacies of Jinnah and Nehru

That the two founding figures of Indian and Pakistani independence were united by a shared love of Urdu speaks eloquently of the language’s rich history.

How Realpolitik 2.0 Can Prevent a Global Conflict

By Liam Gibson and Erich Elkins

Proponents of a rules-based order can learn much from the pragmatic policies pursued by West German leaders during the Cold War.

Who’s Coming to the Beijing Olympics?

The list of attendees underscores the political -- rather than sporting -- significance of the 2022 Winter Olympics.