Before being deported from the United States and returned to his native Vietnam on December 20, 2017, Pham Chi Cuong, a wiry 47-year-old with intense eyes and a shock of graying hair, was living his version of the American Dream. He worked as a sushi chef in Orlando, Florida and lived with his wife and three children, aged 27, 25, and 18.

Cuong arrived in the United States on October 31, 1990 under the Amerasian Homecoming Act, which covered the children of American service members born in Vietnam between 1962 and 1976. In 2000 he was convicted of assault and battery and served 18 months in prison. Then, in 2007 he was placed on probation for driving under the influence.

These convictions made him eligible for deportation, but in 2008, Vietnam and the U.S. signed a bilateral immigration agreement stating that no Vietnamese immigrants who arrived before July 12, 1995 would be subject to return, even if they had a criminal record. That is the date the two countries formally established diplomatic ties.

Cuong never became an American citizen since he thought he was protected by this agreement, but that status appears to have changed under the administration of U.S. President Donald Trump, a fact often overlooked in the broader narrative of warming ties between the two former combatant countries.

For years Vietnam has resisted accepting deportees from the United States, and the country has been listed as “recalcitrant” by the Trump administration. The 2008 agreement was meant to ensure that the Vietnamese government wouldn’t have to take back individuals who had left before the country normalized relations with the United States. That began to change in 2017.

“We started getting news last year that Vietnamese people around the country with final orders of removal were being picked up by ICE [the U.S. Immigration and Customs Enforcement agency],” says Phi Nguyen, litigation director at Asian Americans Advancing Justice – Atlanta, via Skype. “There was a big roundup in March in Miami [2017], and a second round in October and November in Georgia.”

According to figures provided by ICE, as of last December there were over 8,600 Vietnamese nationals in the United States subject to a final order of removal. At that time 7,821 of these individuals had criminal convictions. However, ICE does not track the year each of these individuals arrived in the United States, making it difficult to ascertain how many pre-1995 immigrants face potential deportation.

A 2001 Supreme Court case holds that the government can hold detainees for up to 180 days. If, Phi explains, the individual hasn’t been deported by that point, “the burden really shifts to the government to prove that deportation is likely in the reasonably foreseeable future, and if they can’t meet that burden, then they’re supposed to release people from custody.”

“People that came before 1995, they would be released after 180 days under the Obama administration,” Tin says. “Now, they would stay longer. Then there were the deportations, and that’s when we knew that this was unprecedented.”

In late December, Cuong was flown from the United States to Vietnam along with 17 other Vietnamese immigrants. According to Tin, six had arrived in America prior to 1995, an apparent violation of the agreement discussed above.

It wasn’t until this April, however, that these deportations gained broader attention. That month, Ted Osius, the Obama-appointed former ambassador to Vietnam, wrote an essay for the America Foreign Service Association stating that he had been ordered to pressure the Vietnamese government to receive every Vietnamese immigrant subject to deportation in the United States.

“The majority targeted for deportation…were war refugees who had sided with the United States, whose loyalty was to the flag of a nation that no longer exists,” Osius wrote. “And they were to be ‘returned’ decades later to a nation ruled by a communist regime with which they had never reconciled. I feared many would become human rights cases, and our government would be culpable.” The diplomat resigned in protest. 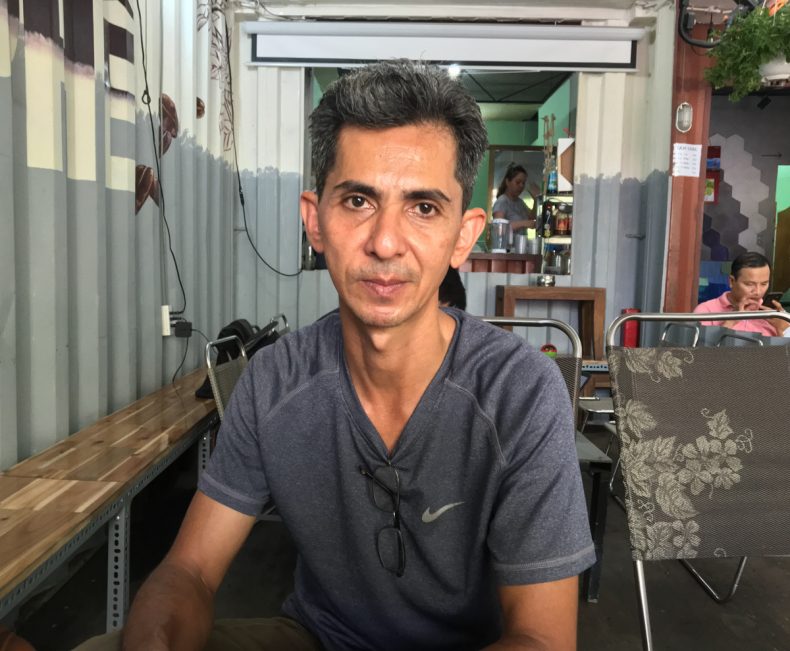 Pham Chi Cuong, the son of an American service member and Vietnamese woman, immigrated from Vietnam to the United States under the Amerasian Homecoming Act on October 31, 1990. He was deported from the U.S. to Vietnam on December 20, 2017. Photo by Michael Tatarski.

Cuong’s challenges in the roughly five months since he was returned to Vietnam are evidence of these concerns. When we met at a café in suburban Ho Chi Minh City run by a deportee who arrived in the United States in 1996, his spirits were low.

“I’m feeling very bad about everything,” he says. “My father is American. I was married over there, I have three kids.”

After the war ended on April 30, 1975, his father’s background created problems. “I was kicked out of my house when I was eight years old,” he shares. “They didn’t like me because my father was American. When I was 19 I found out that I could go to America [under the Amerasian Homecoming Act], and my mom said, ‘You can do whatever you want, I don’t care’.”

He had visited Vietnam three times to see his family before being sent back last year. “The last three times everybody was happy I was here because I’m the one who spends the money,” Cuong shares. “But now I told them the truth, that I got deported, and I really need them to help me, but they don’t care. They said they didn’t have room for me, that I’d have to find somewhere else to live, and they’ve given me a hard time.”

Back in the United States, his family is struggling as well. “My wife does nails, which doesn’t bring in much income,” Cuong says. “My oldest son went to college for three years and quit. My other son is severely mentally handicapped, and my daughter will start college later this year, but my wife is the only one working.”

While he knew that his previous convictions meant he had to check in with ICE every year, he never expected to be returned to Vietnam. “There was one reason Vietnam didn’t want me, and that’s because my father is American and they hate that,” Cuong says. “I don’t understand why they took me back now. I feel very bad. My blood is still American.”

Cuong had just received his new Vietnamese ID the day we met, but he has yet to find a job, even though he lives near Ho Chi Minh City, Vietnam’s commercial center. “I’ve looked for any job; I’ve told them that I have experience as a mechanic, a chef and a server… but when they ask for my background, they see that I was deported and lived in America and say they don’t want me,” he laments. “They put ‘Asian-American’ on the application.”

Thus far neither the Vietnamese or American government has publicly announced any change to the 2008 immigration agreement, leaving those involved in the issue guessing as to what will happen next.

“We were trying to figure out the formula that Vietnam was going to use, is it family, or their conviction?” Tin says. “We were thinking if it’s murder they [Vietnam] won’t take them, but then they took somebody convicted of first-degree murder. There’s no pattern, and that’s what’s so frustrating.”

Equally unclear is why Vietnam decided to begin accepting deportees who arrived in the United States prior to 1995. “I think there’s so much pressure [from] the U.S., and they’ve been threatening the Vietnamese government with visa sanctions,” Tin explains. “From what I understand, although they have taken more than they have in the past, it’s by no means opening up a floodgate. I don’t think they’re going to deport all 8,000.”

Brendan Raedy, an ICE spokesperson, said in an email that these actions are in line with the law: “Each country has an obligation under international law to accept the return of its nationals who are not eligible to remain in the United States or any other country.”

He added, “ICE focuses its enforcement resources on individuals who pose a threat to national security, public safety and border security.”

Whether or not the American government has changed its stance toward pre-1995 Vietnamese immigrants, people on both sides of the Pacific Ocean are scared. Multiple deportees and former detainees contacted in Vietnam and the United States declined to comment out of fear of attracting attention from the authorities. Cuong is an outlier in his willingness to share his story.

Phi, the lawyer based in Atlanta, understands their concern. “There’s a sense that life would be tough [if they were deported] and a lot of them don’t have family members there anymore; they don’t know what they would do for a job,” she says.

She is particularly concerned by the treatment of Amerasians like Cuong, saying, “It exemplifies the harshness of the policy when some of the people being impacted are people who have American fathers and who are actually able to immigrate to the U.S. specifically under the law that recognizes them to be the children of Americans.”

Cuong, meanwhile, has little choice but to accept his fate. He hopes Trump, or a future American president, allows him to return, but the likelihood of that is uncertain.

“My life is over, everything is disconnected,” he says. “I call my family on Viber and try to keep in touch every day. The only thing we can do is pray to God.”

Michael Tatarski is a freelance journalist based in Ho Chi Minh City, as well as the editor-in-chief of the local news site Saigoneer.

Why Is the US Deporting Protected Vietnamese Immigrants?

A 2008 agreement allowed Vietnamese who arrived pre-1995 to stay in the U.S. Not anymore.