India’s government recently released the linguistic data from the latest 2011 census. The results confirm previous data, as well as anecdotal trends: the continuing explosion of Hindi, the growth of English as a major second language among Indians of all ethnicities, the continued strength of the other major Indian languages, and the fact that few people (24,821) actually speak Sanskrit “natively.”

The native languages of India fall into four main, unrelated groups: the Indo-Aryan languages, descended from the Sanskrit of antiquity, of north and central India; the Dravidian languages of southern India; and the smaller Sino-Tibetan and Austroasiatic families concentrated on the northern and eastern fringes of the country. India has 22 official, or scheduled languages, any of which can be used for official purposes by the states of India as they see fit. Hindi and English are official languages at the central level of the entire Indian union.

It is clear that Hindi, India’s largest language, a medieval descendent of Sanskrit via an intermediate language, is still growing rapidly. Its growth as a lingua franca began when it was still called Hindustani, during the Delhi Sultanate and Mughal Empire, when it became a street language for both Hindus and Muslims; its use was also later promoted by the British.

Numerous surveys tend to underestimate or misrepresent the number of people who can understand and speak Hindi and Urdu, a Persianized variant of the same language (officially considered a separate language; Hindi and Urdu are often grouped together as Hindi-Urdu or Hindustani). This is despite the language’s overwhelming dominance in northern South Asia (which does not necessarily mean that use of other languages is declining).

It is rare to encounter individuals without a working knowledge of Hindi-Urdu in northern India, southern Nepal, or Pakistan, as well as large parts of Bangladesh, and many swathes of southern India outside of Tamil Nadu, largely due to internal migration from the north. However, this fact is under-reported because of the way survey results are constituted and interpreted. For example, while 529 million people reported speaking a Hindi language, “only” around 322 million speak standard Hindi natively. This means that nearly 200 million people speak a Hindi language other than standard Hindi, but it is likely that they will switch to being standard Hindi users (the main official language in all 10 Hindi Belt states) in schools, on televisions, and when writing and traveling. In such a scenario, where other Hindi languages are seen as local dialects of the more prestigious standard Hindi, it is likely that these languages will be absorbed into the latter in a couple of generations. The fact that the proportion of Indians who speak Hindi has increased from 37 to 44 percent since India’s independence is additional proof of this phenomenon, even taking into account higher birth-rates in the Hindi-Belt. (Source: Scroll.in) 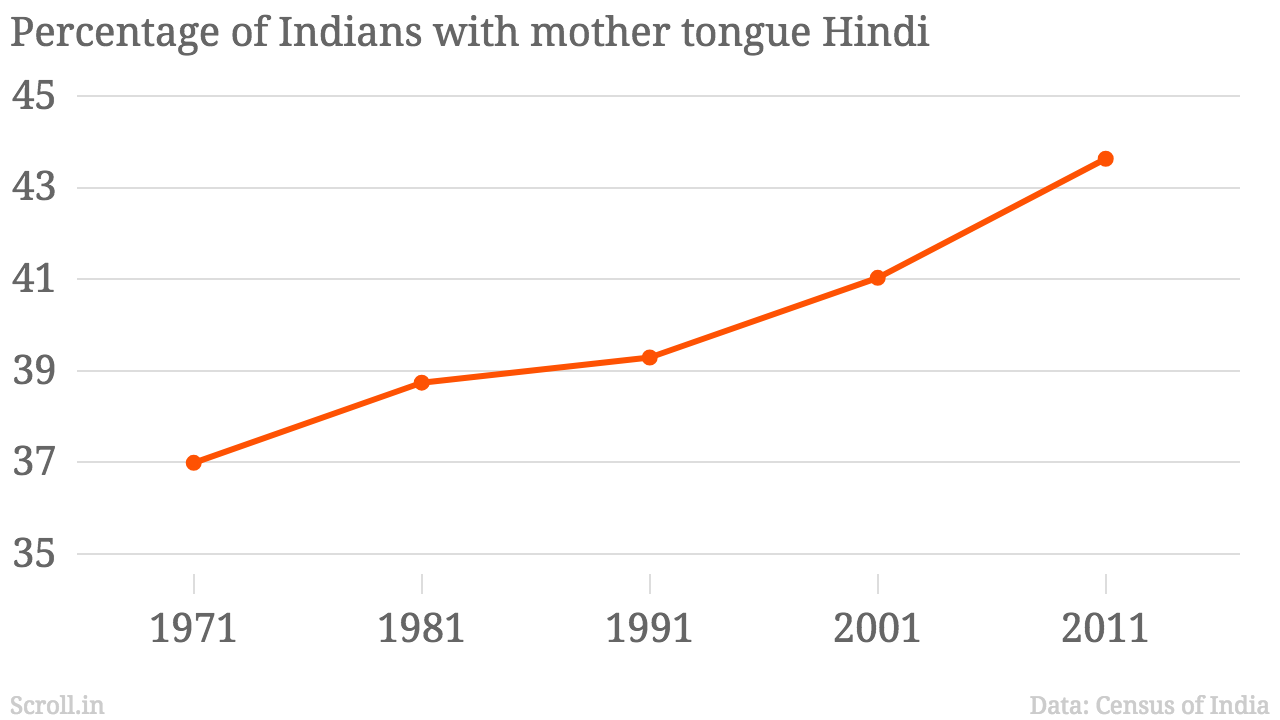 Hindi is also widely understood among users of related languages, such as Punjabi, Gujarati, Marathi, Nepali, and Bengali. The 2001 census reported about 100 million second language users of Hindi; this figure is likely to have doubled by the 2011 census. It would be reasonable to estimate then that around 800 million people, or 60 percent of Indians, can get by in Hindi.

Whether the speakers of some other Indian languages, such as Tamil or Kannada, or India’s anglophone elite like it or not, Hindi has emerged has an all-India lingua franca on the streets of most major cities, in entertainment, and in national politics. However, English remains dominant in business, higher education, and in the sciences. No languages other than English and Hindi can fulfill these roles, because of their demographic and geographic limitations: it is not an issue of the language’s quality or antiquity.

Modern Hindi’s linguistic history parallels those of both French and English. Just as French, which was originally the language of Paris, and grew by absorbing and displacing the other (often barely intelligible) French dialects, the langues d’oïl of northern France, and later the langues d’oc of southern France, standard Hindi, the Khadi Boli dialect of Delhi, has emerged as the link language between the various other Hindi languages, such as Awadhi, Chhattisgarhi, Bhojpuri, and others of northern India. Hindi’s spread, like French’s, was facilitated by the prestige of government use and support, and the creation of modern Hindi was often a deliberate process that borrowed vocabulary from Sanskrit and poetic and literary inspiration from other medieval Hindi languages, especially Braj Bhasa and Awadhi.

On the other hand, however, Hindi’s rapid spread, especially in its colloquial form, owes much to natural processes resulting from its simplified grammar relative to most other Indian languages, and diverse vocabulary. During the Mughal period, in particular, it acquired a huge Persian component, as well as Arabic, Turkic, and Portuguese loanwords. As a result of these processes, Hindi has acquired enormous linguistic flexibility, and an enormous, rich vocabulary, replete with synonyms, idioms, and localizations, including outside of the Hindi Belt (Bambaiya, Hyderabadi, Andamanese, Arunachal, and Fiji versions of Hindi are all examples) in a manner very similar to that of the spread of English. There are often multiple words for the same concept in Hindi: a tadbhav (word evolved from Sanskrit original), a deshaj (word created indigenously), and a word each from Sanskrit, Persian, Arabic, and English. Hindi is multifaceted, and despite the attempt to create a centralized, cultivated “pure” form replete with borrowings from Sanskrit, the language continues to evolve naturally, for the most part.

Hindi’s sister language, Urdu, is spoken natively by only a fraction of Pakistan’s population, but is also widely entrenched as that nation’s lingua franca, and is probably universally understood by the country’s 213 million people; furthermore, it is the only language other than English extensively used in writing in that country. Urdu was also reported as the first language of 51 million people in India. Urdu’s growth as a lingua franca in Pakistan largely parallels that of Hindi’s in northern India.

Hindi is also extensively used as a link language between the various languages of the Nepali terai (lowlands), despite not having any official status there, and while its use remains controversial among highlander Nepali speakers (Gurkhas, Khas, or Pahari), the language remains widely understood throughout Nepal. Hindi, Urdu, and closely related languages are also used, in various forms, among guest workers in the Persian Gulf, and in the Caribbean and Fiji, where the descendants of Indian indentured laborers live.

Putting this all together, a reasonable estimate of the number of Hindi-Urdu speakers or users in the world would therefore be in the vicinity of 800 million to a billion people, second only to Mandarin. That this language is not more widely taught as a foreign language, given the cultural appeal of Indian entertainment, cuisine, music, and art, is something that ought to be rectified, especially as the Indian government is looking for ways to boost the country’s soft power. Undoubtedly, India’s language politics, its continued use of English as an administrative language, as well as the perceived economic benefits of English all play a role in this. However, the learning of all Indian languages ought to be promoted outside of India, to garner greater interest in Indian culture, similar to the manner in which China established Confucius Institutes throughout the world.

Adopt a Heritage: Should Private Companies Be Caretakers of Indian National Monuments?

Will sites like the Taj Mahal become better managed or will they become banners for private firms?

Dozens of new English-Indian terms reveal a lot about the dialogue of cultures.

India E-ditions: Where Can You Read Books on India Online for Free?

There are enough free online books about India to keep you busy until the end of the pandemic.