On July 5, the chief minister of the Malaysian state of Johor suggested that the price at which Singapore buys water should be raised by 1600 percent. Water-scarce Singapore has depended on Malaysia for supply since their split in 1965, and has been buying water at 3 sen per thousand gallons. The same deal that has provided Singapore with up to 60 percent of its water has been the biggest wrench in relations between the two countries ever since. With the new Malaysian prime minister’s revival of the issue in the past month, the city-state needs to act quickly to de-escalate the situation.

When Malaysia’s main opposition party Pakatan Harapan swept ruling party Barisan Nasional from power for the first time in the country’s history, Dr. Mahathir Mohamad was reinstated as prime minister of Malaysia. His predecessor Najib Razak presided over what was lauded as the “golden era” of Singapore-Malaysia relations, signing mutually beneficial infrastructure deals such as the Kuala Lumpur-Singapore High Speed Rail (HSR) project and a stock market trading link between the two countries. 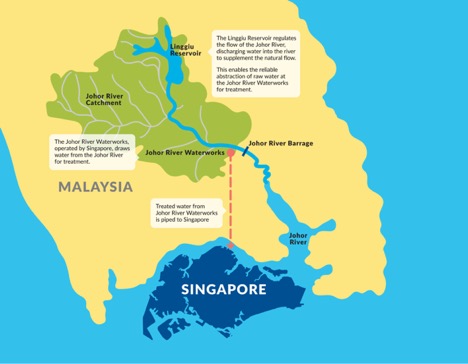 By contrast, Mahathir has revived tensions with Singapore that are reminiscent of his first term as prime minister. He has cancelled the HSR deal, reviewed the trading link and dredged up the long-running debate about the Singapore-Malaysia water deal that dates back to Singapore’s merger with Malaysia in 1962. The water deal has been one of the most contentious items in recent bilateral relations between the two countries.

On June 24, Mahathir said that the price at which the small island nation is buying water from its larger neighbor is “manifestly ridiculous” and that the deal needs to be renegotiated. Singapore’s Ministry of Foreign Affairs responded that both countries must uphold the agreement as it stands. Yet, less than a month later, the Johor chief minister proposed raising the water price 16-fold. Adding further to the rancor of this act, the proposal came only a week after the crown prince of Johor thanked Singapore for its water aid during drought seasons and the water crisis of 2016.

The reasons for the new Malaysian government’s antagonism towards Singapore are manifold. It is led by Pakatan Harapan, a coalition of four disparate parties. Mahathir has effectively teamed up with his former political opponents like Anwar Ibrahim (whom he had jailed on charges of sodomy) and current Finance Minister Lim Guan Eng (who was detained for two years under his signed orders in Operation Lalang in 1987) to wrest power from Barisan Nasional.

Mahathir must present a strong, unified stance to consolidate power for the new government, and is evoking a “rally-around-the-flag” nationalist sentiment in opposition to Malaysia’s smaller, more prosperous neighbor. The prime minister appears to also be using the water deal as leverage in negotiating a withdrawal from the HSR deal without incurring significant penalties — a necessary move for a government trying to grapple with a crippling debt of RM1.087 trillion, a staggering 80.3 percent of Malaysia’s GDP. Furthermore, Mahathir is trying to distance himself from disgraced ex-PM Najib by withdrawing from deals his predecessor had agreed to.

The Singaporean government has been understanding of the domestic political situation in Malaysia. Defense Minister Ng Eng Hen remarked that Singapore did not need to “respond to every articulation” because Malaysian officials might be addressing an “internal audience”. However, the government of the city-state has been quick to affirm that the water deal is an issue of national sovereignty, showing that Mahathir can only push so far in his effort to direct Malaysian attention away from domestic politics.

It is imperative that the two governments cooperate to ensure that tensions do not spike, although Singapore has options to retaliate if it chooses to do so. It could raise the Vehicle Entry Permit (VEP) fees for foreign vehicles as they enter the city-state, which would severely affect the quarter of a million commuters crossing the causeways linking Johor to Singapore every day. In addition, Singapore is Malaysia’s top trading partner, and has run a deficit of $9.9 billion with the latter — the city-state can exert trade pressure on its larger neighbor to adhere to the water agreement as it stands. But these retaliatory measures may not be necessary. Both countries can find common ground on this issue.

In January, Singapore and Malaysia announced a joint venture to conduct a hydrometric modelling study of the Johor River and Linggiu Reservoir (Singapore and Johor’s main source of water, which receded to 20 percent capacity in 2016, causing the aforementioned water crisis). While at the time Malaysia agreed to fully fund the effort, Singapore could offer to fund the remainder of the project as a show of good faith in light of the former’s debt situation. After all, the study would enable both countries to anticipate future changes in the capacity of the Johor River to avoid shortages like the one in 2016. While this move does not affect the existing water deal, it allows Singapore to demonstrate sensitivity to Malaysia’s concerns on the water issue.

Meanwhile, Mahathir’s new government should assuage distrust, not ignite it with their rhetoric, and should pursue common goals–such as sustaining the Linggiu Reservoir–instead of targeting Singapore to inspire Malaysian unity. Finding a resolution to the issue will take time, but it can only happen if both sides take steps towards it together.

Thailand Prepares to Strike Back Against COVID-19. Will It Be Enough?

Duterte Gives the Philippines a Choice: COVID-19 Jabs or Jail

David Brophy on the Alternative to Australia’s ‘China Panic’

Putting out the Fire: The Water Dispute Between Malaysia and Singapore

Water has been one of the most contentious items in recent bilateral relations between the two countries.

Countries in Southeast Asia are racing to implement digital IDs, but governments must proceed with caution.

Singapore-Malaysia relations are at a low amid an ongoing dispute over waters off Tuas.

The interest Singaporeans have taken in Malaysia’s elections reflects their shared histories…and concerns.

Why Are Indians So Angry at Bill Gates?

The latest backlash against the Gates Foundation in India is the result of years' worth of concerns raised by human rights activists and civil society.

Once considered the gold standard for COVID-19 response, Vietnam is now battling rising infections and a glacial vaccine rollout.

The fatality rate trails behind infections, so Pakistan’s morbidity rates will take awhile to fall.

It’s Official: China’s Longtime Ambassador to the US Is Leaving

Cui Tiankai announced his imminent departure this week. What does that mean for the China-U.S. relationship?

The current crackdown on mining goes even further in eradicating cryptocurrency activities from China’s economy.

Can Japan Fix the Gender Gap in Its Politics?

Japan remains hesitant to formally tackle its male-dominated political system. But one woman might beat the odds and force real change.