Every week, a handful of Air Koryo flights shuttle passengers between Pyongyang and cities in China and Russia, leaving contrails in skies largely uncongested by aviation, evidence of North Korea’s relative isolation from the rest of the world.

The missile launches that have led other airlines to avoid North Korean airspace, however, do nothing to deter the many tens of thousands of migratory shorebirds that stopover to feed at the country’s wetlands en route to breeding grounds in the Russian Far East and Alaska.

It was partly in recognition of that fact that North Korea, formally known as the Democratic People’s Republic of Korea (DPRK), became the 170th contracting party to the 1971 Ramsar Convention on wetland protection in May. The convention commits the North to the “conservation and wise use” of its wetland resources and provides guidance and technical support toward that end.

North Korea’s accession to Ramsar was encouraging for conservationists. In the last few decades, rapid economic development in China and South Korea has led to the widespread loss of tidal wetlands in the Yellow Sea. One analysis found that up to 65 percent of historical tidal flat area has been lost over the past 50 years.

“However, in the DPRK, there hasn’t been the same speed of loss of tidal flats because the economy has not been expanding,” Dr. Lew Young, chief executive of the East Asian-Australasian Flyway Partnership (EAAFP), said at a press briefing last month. “So if we want to conserve the tidal flats around the Yellow Sea, [to] conserve the habitats for these critically important migratory waterbirds, we have to look into the DPRK and see what we can do to conserve the other tidal flats in the DPRK.”

North Korea’s commitment and ability to protect its wetlands could soon be put to the test.

Many observers have interpreted North Korean leader Kim Jong Un’s push for a deal on denuclearization as a pivot from nuclear weapons to the economy. But such a policy raises the specter of development at the expense of the environment. U.S. President Donald Trump highlighted that danger at the summit in Singapore when he praised North Korea’s coasts as prime real estate for condos.

Already a Chinese company has bulldozed land for fish ponds at the Rason Migratory Bird Reserve — one of the North’s two new Ramsar Sites — according to recent visitor Dr. Nial Moores, the director of South Korean conservation organization Birds Korea. The site’s remoteness, he said, makes it difficult for officials in Pyongyang to oversee conservation efforts. “We therefore believe that we need to find as many ways as possible, quickly, to support [their] capacity so that the best of this site can be conserved.” 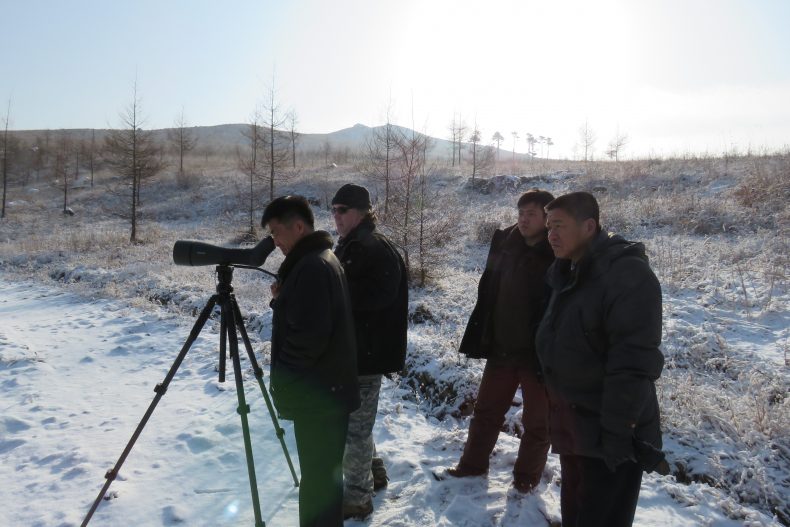 The Rason reserve is located in the far northeast on the border with Russia and China and is distinguished by a diversity of habitats. Three or four shallow, vegetated lakes lie in a valley surrounded by rolling hills, some forested, others grassy. Birds gather in large numbers on the lakes and adjacent seas, which even support a population of harbor seals.

It’s an idyllic setting well-suited for ecotourism. Yet as the recent construction makes clear, it also exemplifies challenges for conservation in North Korea.

For one, researchers report high levels of human activity in the area due to labor-intensive rice paddy agriculture. Moores said that’s why species like cranes fly over rather than staging at Rason.

Human use is common at wetlands throughout North Korea, as fishermen and farmers directly depend on the ecosystems for their livelihoods and survival. As a result, conservationists have to consider not only the environment but also local people’s needs.

An earlier project that ran from 2008 to 2015, for example, focused on helping farmers in the Anbyon Plain south of Wonsan improve rice yields. That in turn secured food for the endangered red-crowned cranes that feed in the rice paddies during the winter. 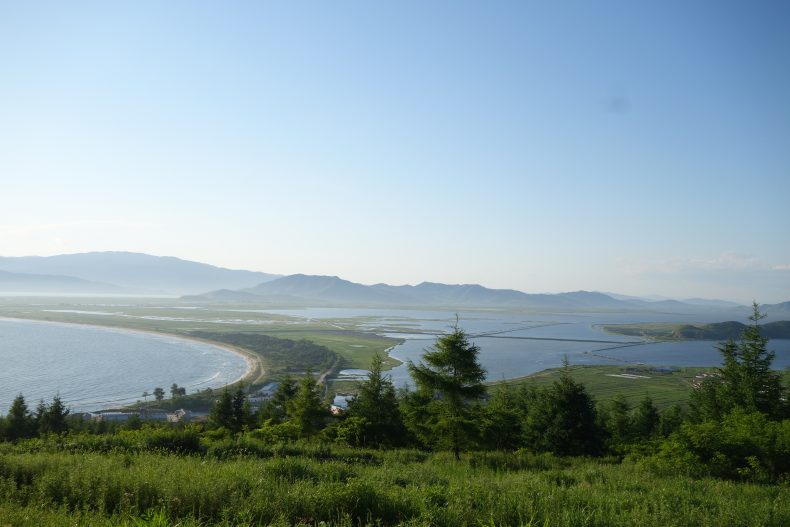 Another challenge at Rason is the potential development pressure due to the area’s status as a special economic zone. For years, Pyongyang has sought outside investment to build the city of Rason into a port and regional hub. While those efforts have not come to much yet, that could change if the United Nations relaxes sanctions.

Land reclamation, for instance, has taken place at Rason in the past, its shallow lakes, former rice paddies, built on what was once sea. Pyongyang pursued a number of large-scale reclamation projects on its coast back when the Soviet Union helped prop up the economy.

North Korea’s second Ramsar Site, the Mundok Migratory Bird Reserve, is notable in part because it hasn’t been reclaimed, with Moores comparing it to the South’s Saemangeum estuary prior to the construction of a massive seawall. 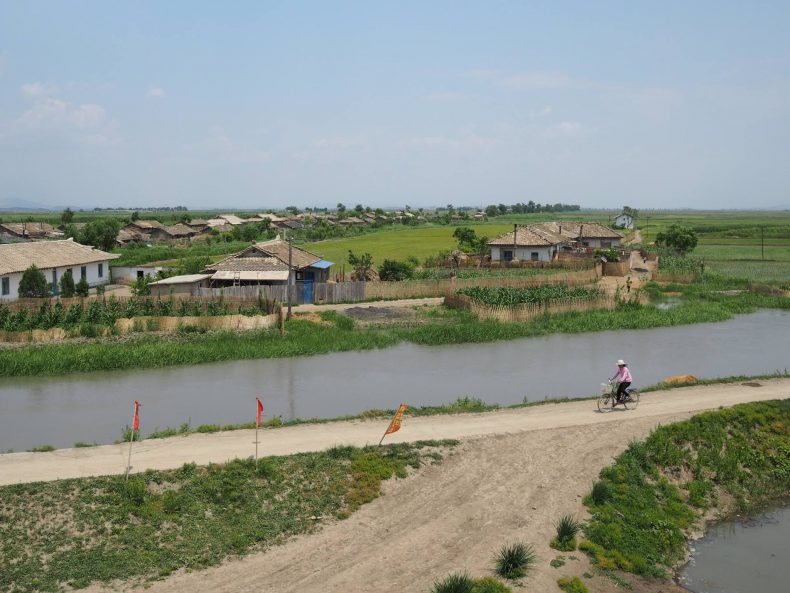 Mundok is located on the west coast near the mouths of the Chongchon and Taeryong Rivers. Together the two rivers empty into the sea and “create this wide fan of sandy mud tidal flats that just stretch out to the horizon,” Moores said. The inner parts are heavily vegetated with sedge and reed, and adjacent rice paddies give the appearance of continuous marshland. Those characteristics make for great bird habitat, with researchers having recorded more than 280 species at the site, 22 of which are globally threatened.

The scene contrasts sharply with coastal areas to the north of Mundok, where satellite imagery clearly shows at least two large reclamation projects with kilometers-long dikes that impound the tides.

North Korean media have also reported on projects totaling several thousand hectares at Honggon, Sinmi, and Jop Islands. The size is significant given that the North had an estimated tidal flat area of only 108,000 hectares as of the 2000s.

“Compared to the speed with which this happens on the Chinese side of the coast, this is very slow,” Dr. David Melville, a researcher with the New Zealand-based Pukorokoro Miranda Naturalists’ Trust, said. “But it is still happening.” 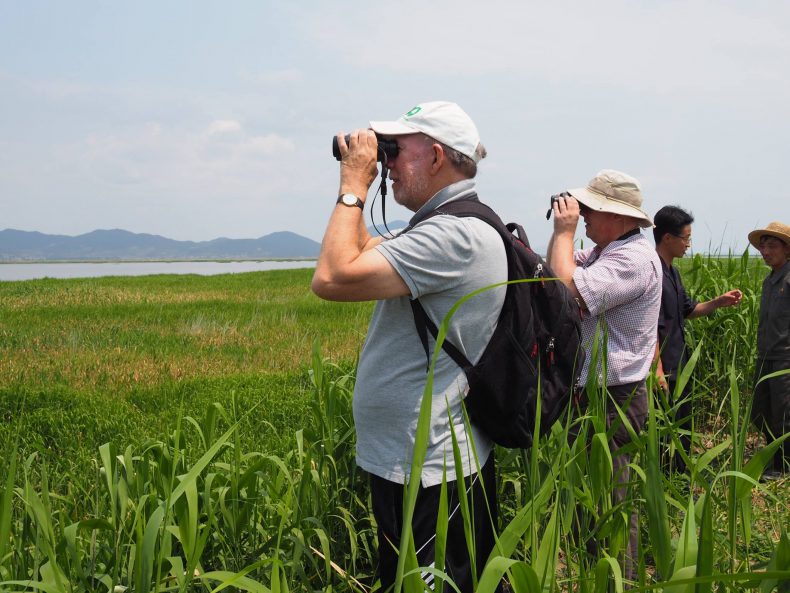 Despite the challenges — and North Korea’s reputation as a closed country — foreign organizations have been partnering with Pyongyang on wetland and waterbird conservation for around a decade now, with promising results.

In May, several international experts attended a national workshop on wetlands organized by the Ministry of Land and Environment Protection (MoLEP). A floor-to-ceiling mural of a fiery sunset along the coast provided the backdrop for talks on Ramsar and wetland management at the venue in Pyongyang.

“The last time there was energy in the room, I felt … there was just real enthusiasm for conservation,” Moores said of the workshop. He drew a contrast with events just a few years ago, at which attendees seemed unfamiliar with the Korean word for wetland. 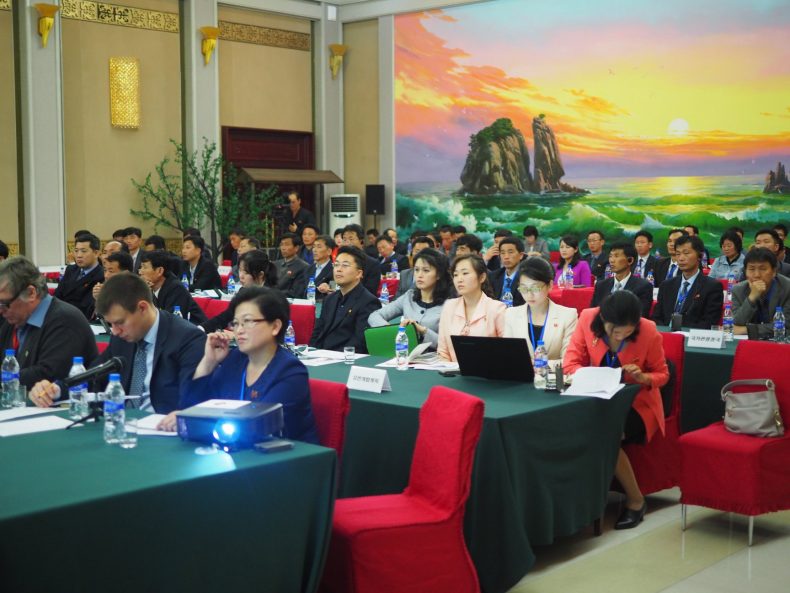 DPRK officials and foreign guests listen to a presentation at a national workshop on wetland conservation in Pyongyang on May 16, 2018. Photo courtesy of Hanns Seidel Foundation Korea.

One of the surprises, Moores said, has been how willing officials have been to accept outside help and expertise. He initially worried that the government might not trust data from field surveys.

Instead, officials have been incorporating waterbird counts by the Hanns Seidel Foundation Korea and Miranda Naturalists’ Trust into an update of the national wetland inventory set to be released this fall. Researchers have also been allowed to access sensitive coastal areas, though minders limit where they can go and what they can look at.

The nonpolitical nature of conservation work has allowed them continue even amidst strict sanctions on the North and deteriorating inter-Korean relations under the previous two conservative administrations in Seoul. North Korean officials, researchers say, are proud of their country’s biodiversity and eager to protect birds like the cranes featured in Air Koryo’s logo.

“They want industry. They want more income,” Young of the EAAFP said, “but they don’t want to destroy their environment at the same time.”

That interest in sustainable development will be essential going forward. Ramsar is nonbinding; it will be up to Pyongyang to uphold its obligation to protect its wetlands.

Bryan Betts is a freelance journalist based in Seoul. He has worked for daily newspapers in South Carolina and New Mexico and previously taught English in South Korea through the U.S. Fulbright Program.

By Jay Song and Benjamin Habib

Natural disaster - including the flurry of typhoons that hit in summer 2020 - exacerbate existing issues, from food security to infrastructure deficits.

Can Capitalism Take Off in North Korea?

Flirtations with capitalism need to overcome a rigid ideology.

The Perils of Investing in North Korea

Large Chinese investors have been disappointed. Smaller traders, however, are busy.

Why Is Household Debt in Thailand So High?

COVID-19 exacerbated the situation, but high levels of household debt are a structural feature of the Thai economy that predates the pandemic.