Nepal is a small yet geographically highly diverse country located in South Asia. Its territory ranges from altitudes of 60 meters to 8,848 meters above mean sea level within its area of under 150,000 square kilometers. According to the National Biodiversity Strategy, 2002 Nepal encompasses 118 different types of ecosystems. Home to mega-fauna like tigers and the one-horned rhinoceros and the habitat of 11,971 different species of flora, Nepal is one of the most unique nations in the world.

Among its many specialties, however, the beauty of Nepal lies largely in its success when it comes to wildlife conservation. Nepal has put itself on the front line when it comes to commitment in conserving and managing all sorts of resources and life-forms, including both plants and animals.

Wildlife conservation is an undeniable need. Most of Nepal’s people still rely on wildlife resources for necessities like fuel, fodder, and medicinal plants. Plus, a huge sum of currency is earned through wildlife-based tourism, which has been a welcome addition to Nepal’s GDP. The beauty of Nepal is astounding, but one can barely imagine this breathtaking beauty without Nepal’s greenery or mega-fauna.

More than 23 percent of Nepal’s total area is declared as protected area. That includes 12 national parks, one wildlife reserve, one hunting reserve and six conservation areas. Each national park has its own buffer zone to facilitate human-wildlife co-existence. It is a matter of pride that, within such a small geographical area, Nepal has two national parks that have been enlisted as world heritage site by UNESCO. Another interesting part is that, out of the six conservation areas, three are managed by an NGO, two by the Nepali government and one by the local community themselves.

The hunting reserve has also been a part of Nepal’s conservation approach. The prime aim of the hunting reserve is to control the population of blue sheep and use the income earned by legalized hunting for keystone species of the region.

Besides protected areas, various schemes of forest management have been used through the provision of national forests (community forests, collaborative forests, government managed forests, leasehold forests, protection forests, and religious forests) and private forests. Each type of forest is declared in accord to feasibility based on different criteria like the economic status of the local community, biodiversity of local resources, social beliefs of local community, and so on. Policies and guidelines have been formulated and amended in a timely manner in the context of both resource conservation and promotion. 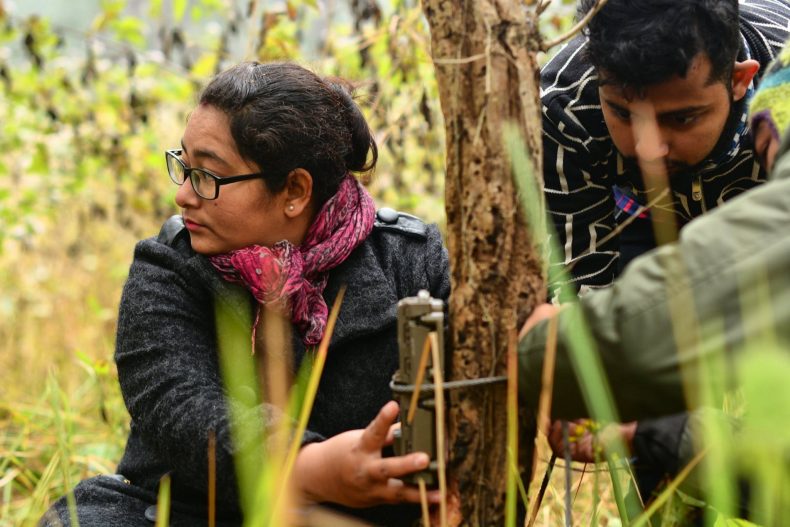 A camera trap being deployed during the National Tiger Survey (photo courtesy of WWFNepal).

This collaboration between international NGOs and local NGOs (I/NGOs), government agencies, and local communities has been the key factor that has broadly curbed poaching and illegal activities to a broad scale, making Nepal an admirable example of wildlife conservation. Each party has contributed significantly whether through technological adoption, economic support, or voluntary contributions. The most important contribution, however, comes from the local communities, which have been so tolerant and resilient even when their crops are raided or livestock killed or wounded by wild animals. The quote “live and let live” has been well-followed in Nepal’s context.

Nepal has been tactically clever when it comes to conservation efforts. The period between 1973 and 1996, dominated by a protection-oriented conservation approach, did not yield much in terms of results. So Nepal declared a buffer zone in 1996. Since the declaration of the buffer zone, the human settlement areas adjacent to national parks, wildlife reserves, and conservation areas are given high priority and allowed to enjoy ownership of the resources nearby in a disciplined and sustainable manner.

Currently, Community Based Anti-Poaching Units (CBAPUs) have been formed in various regions of the country where biodiversity conservation needs more efforts. CBAPUs function in the form of voluntary associations of youths, guided by community forest user committees along with I/NGOs like WWF, ZSL, and NTNC and directly motivated by government authority as well. CBAPUs have thus systematized the efforts of local youths — more than 400 units of CBAPU are working in different regions of the country, performing functions like joint patrols and animal rescues. This is a convincing example of how the youth, when made aware and motivated, can be pivotal in conservation. It has to be kept in mind that poaching without involvement from local youth is quite tough – or, conversely, conservation with the involvement of local youth can be stable. 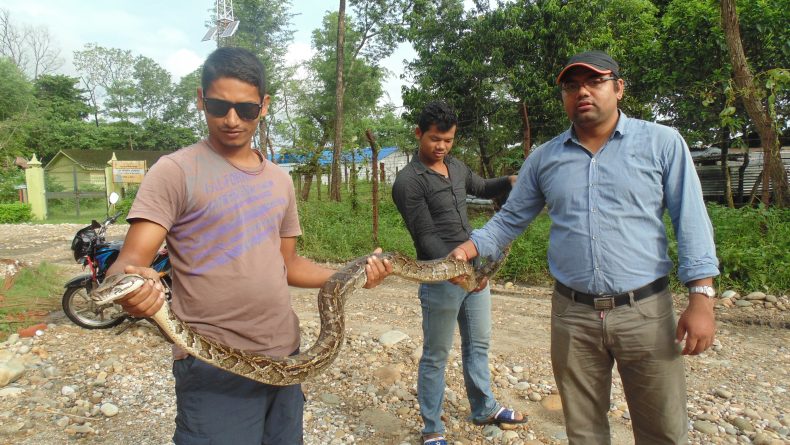 A rescued python being submitted to a park ranger by a CBAPU member (photo courtesy of Meghauli Rangepost, CNP)

I/NGOs like ZSL, NTNC, and the WWF conduct regular surveys of wildlife populations and habitat assessments as well. They have been providing technical and economic support in this context. They have catalyzed as well as increased the concentration of efforts of wildlife conservation.

Nepal’s results have not been obtained easily. SMART(Spatial Monitoring and Reporting Tool) patrolling, GPS (Global Positioning System) and GIS (Global Information System), and drones, among other technologies, have been deployed to scientifically research the outcomes of wildlife conservation. A substantial amount of revenue earned by protected areas is spent in the development and betterment of local communities.

However, this is not to say that Nepal has reached its upper limit in conservation; in fact, reaching 100 percent wildlife conservation is almost an impossible thing in the face of the growing demands and needs of human beings. Human-wildlife conflict is an ongoing issue. Similarly, the shortage of economic resources has been a barrier in some cases. However, Nepal’s efforts over the last decades have overshadowed these challenges as the positive achievements are marginally higher than this darker side. This remaining challenges can be overcome through community awareness, good governance, and sound collaboration among multi-stakeholders. Nepal has been putting its steps positively in that way.

Nepal has made progress by promoting current efforts, building appropriate strategies like NBSAP (National Biodiversity Strategy and Action Plan) and the forest policy. It has revealed a truth: That as long as the efforts of local communities are recognized and rewarded in several ways, controlling poaching and promoting the status of natural resources is not that complicated. Nepal’s example teaches that attention must be paid to sustainable development – only then can conservation efforts be stable.

Nepal, thus, has a beautiful message for the world. Do not let the local community be isolated from conservation strategies, but instead let them enjoy the benefits of conservation following principles of sustainability. Keep upgrading the technical capacity of local communities, continue conducting multi-stakeholder collaboration, incorporate development agendas in conservation schemes — and then miraculous achievements will follow. In Nepal, that means the existence of 645 one-horned rhinos, 198 Bengal tigers, and a good population of Asiatic elephants, gaur, red pandas, and more within the 44.74 percent of forest area and other areas of this tiny country.  The key is the willingness to find the proper way, as illustrated by Nepali society, which is largely positive toward despite the challenges. Local communities are able to tolerate as well as resist these harms because they believe conservation is far more significant. As long as all the stakeholders perform their duty, achievements in wildlife conservation will continue.

Prabin Poudel is a graduate from the Forestry faculty at the Agriculture and Forestry University, Nepal.

How Nepal Is Protecting Its Wildlife

Nepal makes progress in wildlife conservation but it risks becoming a transit hub.

Nepal’s Supreme Court halted the construction of a new international airport as it considers a protest from environmental groups.

The main story at the end of the climate change meet should have been the lack of ambition of the advanced nations and their non-fulfilment of climate finance pledges.

Over 180 People Killed After Heavy Rains in Nepal and India

“The people of Nepal and India are sandwiched between the pandemic and worsening climate disasters, heavily impacting millions of lives and livelihoods.”