At the tables of the Madhur Canteen, the University of Dhaka cafeteria where the Bangladesh liberation movement was set up in 1971, students drink tea, eat vegetable rolls, and enjoy misti, small white balls of milk with sugar. But something is missing – a part of canteen’s storied reputation is no more.

“Madhur Canteen had always been a political axis, a place to meet and plan political strategies, but it no longer has the plurality that it had two or three decades ago. Things have changed,” admits a professor at the Faculty of Arts, where the canteen is located. According to him, the dining room of the revolutionaries who once fought a battle to defend Bengali identity is now closely watched by the guardians of the status quo.

Ten years ago after the Awami League, with Sheikh Hasina as prime minister, took over the reins of Bangladesh, all opposing voices have been quieted at the country’s most prestigious university. The Chhatra League, the party’s student organization, terrorizes students and teachers who disagree with Hasina’s growing authoritarianism.

The black-and-white face of the country’s founder, Sheikh Mujibur Rahman, who is also the father of the current prime minister, appears everywhere. The colors of the national flag shine on the ceiling. But under the watchful eye of the government, just one voice is heard. “Ninety percent of those who are here are from the Chhatra League,” says another professor at the Faculty of Arts. 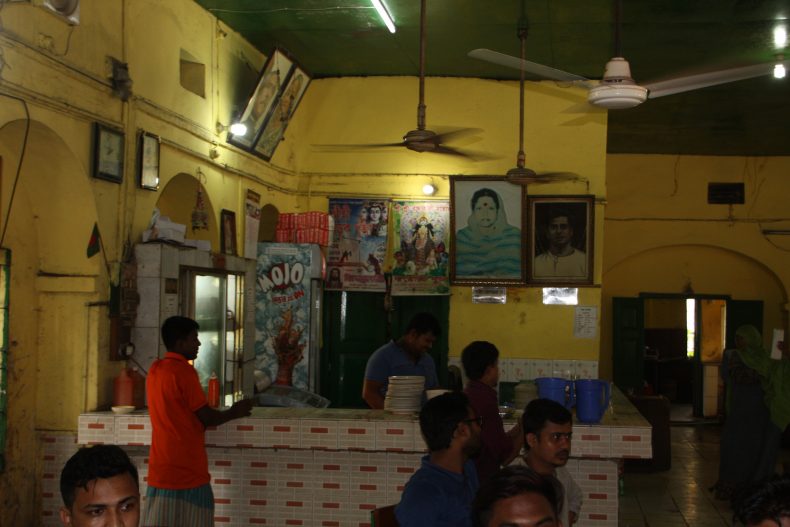 Inside the Madhur Canteen. Image by Josep Prat.

Currently, an important part of the 40,000 students of the University of Dhaka, whether due to fear, interest, or despair, have joined the ranks of this government student organization. The professors affirm that the Chhatra League has control over who is admitted to live in the on-campus residence. This has become a pressure point used to recruit bright students from poor areas who cannot afford accommodation in the capital.

“They force them [students] to attend daily meetings, delivered by the leader of each block of rooms. If they refuse, they are expelled immediately,” explains a teacher who teaches foreign languages, and who also does not want to see his name published.

Another teacher reveals that the unofficial policy at the University of Dhaka is borrowed from the book The Art of War by Chinese military strategist Sun Tzu: “If you cannot beat your enemy, join them,” the teacher says, smiling.

Saddam Hussain, the general secretary of the Chhatra League at the University of Dhaka, was elected to the post by the prime minister in August. Hussain agreed to be interviewed by The Diplomat in Madhur Canteen.

Those who see him scurry over, bend their heads, and shake his hand. The waiters in the canteen, seeing Hussain, begin frantically running around preparing a table, while the uproar continues. Once Hussain is seated, his second-in-command scolds those who continue to come to the leader and demands silence, which everyone respects immediately.

Suddenly, the canteen seems to have become a television set as we begin our interview. 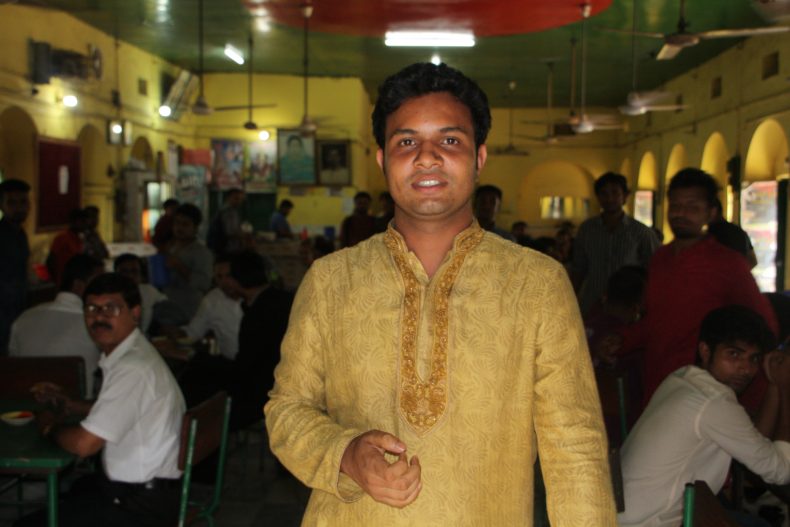 Hussain’s answers to questions are politically correct. When asked about his desire to pursue a political career, he demurs. “I will always be an activist who encourages change, and I do not think that can it be done only from the position of prime minister,” he says. Yet whatever his political ambitions, Hussain is arguably the most powerful person on campus already.

Right as Hussain was taking up his position as leader of the Chhatra League, the death of two students in a traffic accident triggered more than a week of protests. The protesters blocked the streets of Dhaka and other cities between July 29 and August 8, demanding that government improve road safety. But while their peers took to the streets, the Chhatra League was accused of directing violence to curb the protesters. During the demonstrations, groups of individuals wearing motorcycle helmets and holding long poles charged against primary, secondary, and university students who were demanding to see drivers’ licenses and controlling traffic to demonstrate the possibility of a change. To critics, the Chhatra League’s role in the protest is proof that the prime minister will use this student organization to guarantee peace during the general elections in December.

Hussain denies any violent action on the part of Chhatra League affiliates, but he justifies the repression of the protests. “It was an attempt by the opposition to turn a social movement into an intolerable political movement,” Hussain says. “When it started, we approached schools to express our support and even give them chocolates,” he added. But what was initially a just demand, in his description, ended up becoming a “challenge to the law.”

According to another leader of the Chhatra League, Nayan Howzaddar, social media was also to blame for the protests getting out of hand. “Where was Facebook during the road protests?” he asks. “It just became a channel of misinformation — videos, images, and texts that ran like wildfire were all rumors, fake news.” According to him, it had to be stopped by the law.

With Khaleda Zia, the leader of the main opposition party, sentenced to five years in prison for allegedly appropriating over $250,000 from her orphanage, the government turned its attention to the media and social networks. The Digital Security Act, termed draconian by critics at home and abroad, was passed by the parliament on September 19. Ignoring the concerns of journalists and the rights of defenders, the act authorizes the police to search and/or arrest anyone without a warrant.

In this regard, section 8 of the Digital Security Act includes provisions about blocking or removing any content on digital media that is deemed to hamper harmony, disturb public order, or create communal hatred, among other things. What’s more, according to Section 25, a person may be jailed up to five years for “deliberately publishing or broadcasting fake news on a website.”

Amnesty International has already warned that “the law imposes dangerous restrictions on freedom of expression” and that “instead of learning from the lessons of the past, it seeks to repeat them (…) with serious concerns that will be used against people who speak out.”

But Howzaddar insists that there is a real concern to be addressed: “A lot of people do not use Facebook correctly.”

“So, the violence in the streets [during the August protests] was fake news?” I ask him.

“Most of it,” Howzaddar replies. “The violence was generated by the opposition groups themselves to blame the government.”

At the exit of the University of Dhaka campus, the rickshaw horns blare and the streets tremble with a shuddering noise. But in the classrooms, in the media, and on Bangladesh’s social networks, silence reigns. As the date of the elections nears, the Awami League patiently awaits the fruits of their autocracy.

Josep Prat is a journalist focused on South and Southeast Asia. His work has appeared in La Vanguardia, ElNacional.cat and Catalunya Ràdio.

On December 30, Bangladesh goes to the polls. There is a real danger of political regression.

The Digital Security Act 2018 was just the latest blow.

As China’s infrastructure improves further, it’s going to be harder than ever for U.S. multinationals to move to underdeveloped countries like Vietnam and Indonesia.