In the period following the 2011 Fukushima nuclear disaster, Japan saw the release of harmful radioactive pollutants or radionuclides, such as iodine‑131, cesium‑134, cesium‑137, strontium‑90, and plutonium‑238, among many others. Yet today, the scale of radioactive contamination throughout northeastern Japan is no longer what it used to be since 2011. Indeed, that’s what the members of the local and central government, as well as nuclear-related agencies, have repeatedly stated throughout the years. Many journalists have kept promoting this discourse, with The Guardian recently stating that “In the empty lands around Fukushima today, most of the radiation is long since gone.”

Eight years after the disaster, radioactive exposure no longer seems to pose a problem. So what has happened to radioactive contamination? Has it disappeared? Well, not exactly. While it is true that some radionuclides like iodine-131 are no longer present in the environment, due to their very short life span, the overall picture of contamination is much more complex. 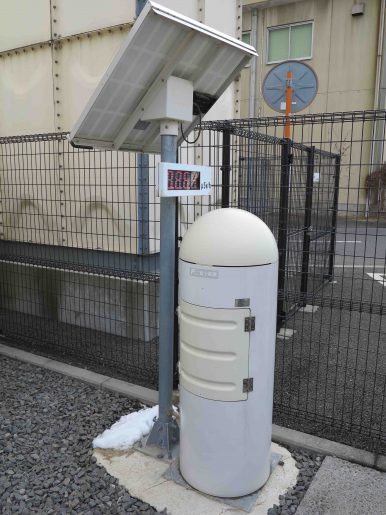 In recent years, measurements gleaned with these monitoring posts have provided very optimistic views of radiation levels in Fukushima. For instance, in official documents created by the Reconstruction Agency, the principal apparatus of the government of Japan tasked with the revitalization process of Fukushima, the atmospheric level of radiation in Fukushima prefecture is listed at about the same level as other major cities overseas, like New York, Shanghai, or Munich. This alludes to the fact that radiation exposure has reached normal levels. Such comparisons are, however, highly misguided.

Indeed, the levels of radioactivity in places like New York are mostly the result of background radiation, which is naturally occurring radiation from the soil or the sun. These are rays that pass through the body and leave. Fukushima, on the other hand, is dealing with the release of radionuclides, which are fission products from nuclear power plants. These radionuclides are not rays, but dust-like particles that can stick to the body and be inhaled or ingested. Weather factors like wind and rain have displaced many radionuclides like cesium-137, which accumulate in patchy locations, such as ditches, drainage areas, or playgrounds. Because of this uneven dispersion, monitoring posts often overlook the presence of hot spots, places where the level of radiation is significantly greater. Dissatisfied by state-sponsored monitoring, many citizen scientists have collectively tracked and monitored residual radioactivity in Japan, legitimizing the presence of hot spots. 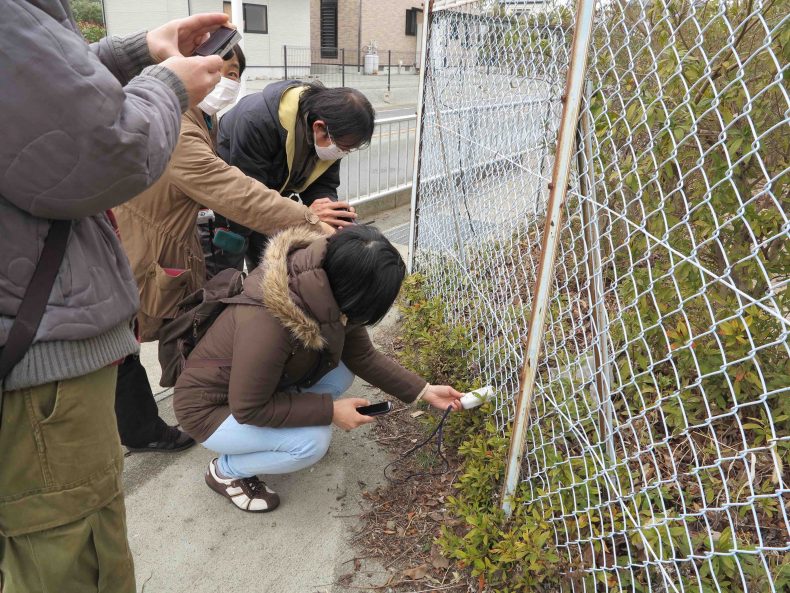 Monitoring posts are also strategically placed and their surrounding areas cleaned so that the levels of radiation remain lower. No monitoring posts are present in forests and mountains, which represent more than 70 percent of the area of Fukushima prefecture.

On top of such problems, radiation posts only measure radiation in the form of gamma rays. Yet the disaster has also released radionuclides that emit ionized particles, that is, alpha and beta particles. These ionized particles are not taken into account by state monitoring posts, even though they are dangerous if inhaled or ingested. Consequently, the data accumulated by monitoring posts is partial and unrepresentative of the extent of radioactive contamination.

Levels of radiation have also decreased due to a massive state-sponsored program of radioactive decontamination in the urban and rural areas of Fukushima. The process of decontamination consists of collecting and removing radioactive pollutants. Radionuclides are then contained in vinyl bags, so as to impede the risk of rescattering residual radioactivity. As a testament of the government-led decontamination, mountains of black plastic bags, filled with contaminated soil or debris, can be seen in many parts of Fukushima, forming a stark contrast against the emerald-green mountains of the region. 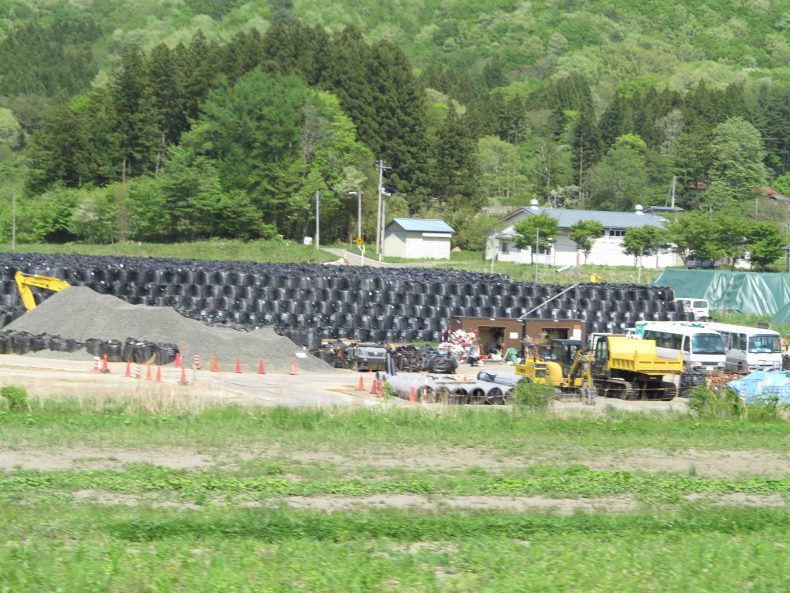 Storage bags pilled upon each other in Fukushima. Photo by Maxime Polleri.

As such, decontamination does not imply that radiation has vanished; it has simply been moved elsewhere. Yet in rural regions, where many of the bags are currently being disposed, far away from the eyes of urban dwellers, residents are still forced to live near the storage sites. Many rural residents have criticized the actual efficacy of the decontamination projects. For instance, vinyl bags are now starting to break down due to the build-up of gas released by rotten soil. Plants and flowers have also started to grow inside the bags, in the process tearing them apart. With weather factors, residual radioactivity inside the bags will eventually be scattered back into the environment.

In the end, state-sponsored monitoring and decontamination are remedial measures that manage the perception of radiation in the environment. However, this does not imply that radioactive contamination is gone – not at all. When we look at the official maps of radiation of northeastern Japan, levels are low, but there are many ways to make them appear low. With overall lifespan that exceeds hundreds of years, radionuclides like cesium-137 or strontium-90 will continue to pose a problem for decades to come. However, with the upcoming 2020 Tokyo Olympics, it is doubtful that the Japanese state will ever acknowledge this reality. 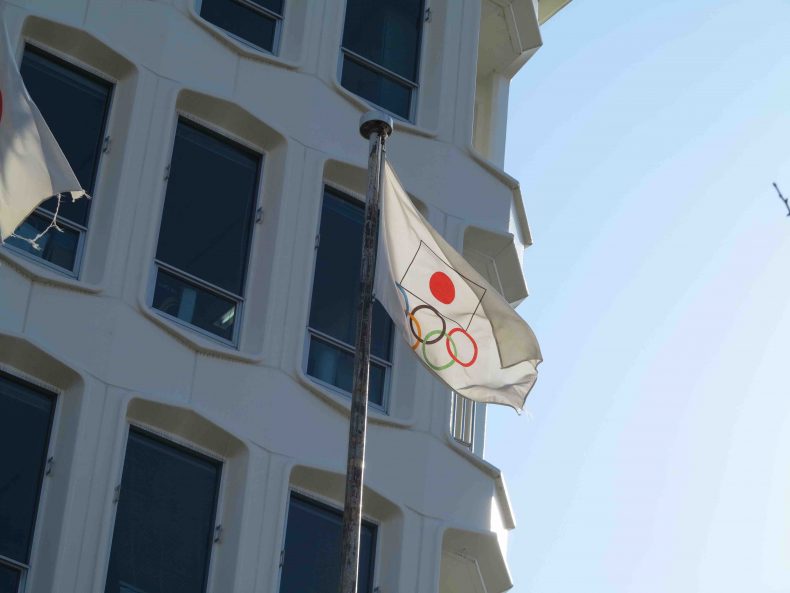 The Olympic flag is already present in Tokyo. Photo by Maxime Polleri.

Maxime Polleri is a Ph.D. candidate in the Department of Anthropology at York University and a MacArthur Nuclear Security Pre-doctoral Fellow at the Center for International Security and Cooperation in Stanford University.

Fukushima Disaster’s Impact on Health Will Be Challenged in Court

A link between radiation from the Fukushima nuclear disaster and cancer will be the focal point of the civil court case against operator TEPCO.

Despite recent setbacks, the head of Fukushima Daiichi nuclear plant says the goal to fully decommission in 30-40 years is on track.

Delays in dismantling the disaster-stricken nuclear power complex cast doubt on whether recovery goals will move forward according to schedule.