Over the last three decades, the top plastic waste exporters, including the United States, Japan, and the United Kingdom, sent abroad plastic waste weighting about  168 million tonnes, most of it to China. In 2018, China said “enough is enough,” and announced a ban on imports of plastic waste, setting off a crisis in the global waste system. The majority of this plastic was then redirected into Southeast Asia, with Malaysia, Vietnam, Thailand, and Indonesia being flooded with waste, at great environmental and human cost.

However, from local clean-up crews and campaigns to global action, a powerful movement to break free from plastics is making change in 2019.

This week at the United Nations, over 180 countries took a major step forward in curbing the plastic waste crisis by adding plastic to the Basel Convention, a treaty that controls the movement of hazardous waste from one country to another. This change means exporters will be required to get consent from receiving countries before shipping most contaminated, mixed, or unrecyclable plastic waste, providing an powerful way for countries in the Global South to stop the dumping of unwanted plastic waste into their country.

European Union countries, who already have a law banning all exports of Basel-controlled “hazardous” waste to developing countries, will now also be prohibited from exporting dirty or mixed plastic waste to much of Asia.

This decision will help to clean up the trade in plastic currently flooding Southeast Asia, which has resulted in polluted waterways, fires and illegal dumping, to name just a few issues. Controls on the global plastic waste trade will have real impacts in the lives of local people, such as those living in towns like Kok Hua Khao in Thailand, where the water has become undrinkable since a foreign waste operation started there last year.

While all Asian countries supported the move, not everyone was cheering on this new waste trade regulation. The United States (the largest exporter of plastic waste in the world), the petrochemical industry, and some recycling lobbying groups strongly opposed the deal. Yet as the United States is not a party to the Basel Convention it was not able to vote, and will be banned from trading dirty or mixed plastic waste to most of the Global South. As Jim Puckett from the Basel Action Network explained, “The fact that the U.S. will no longer be able to use the rest of the world as a plastic waste dump is a very significant victory for the environment and global justice.”

This global action should result in less plastic in our oceans, as exporting countries will be forced to take responsibility for their own plastic problem, rather than simply exporting their pollution. 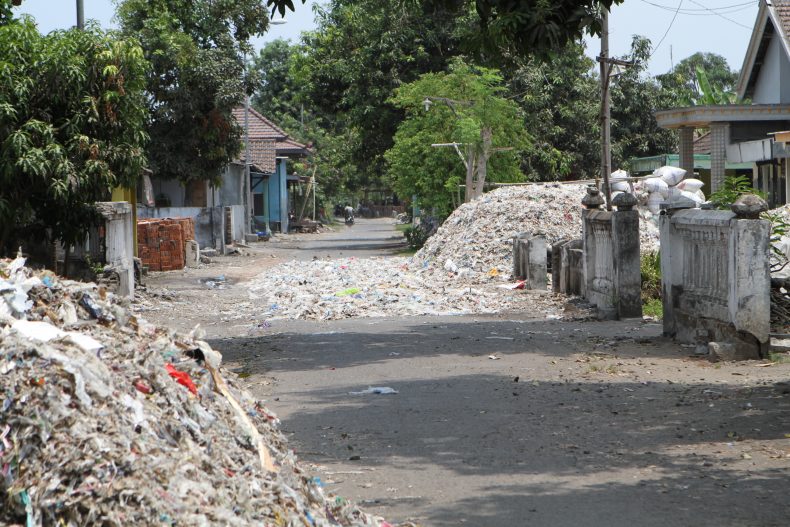 A town drowning in plastic imports in Surabaya, Indonesia. Photo by Emma Priestland, Friends of the Earth.

The murky reality is that much of the plastic that we throw into recycling bins is low-grade, dirty, and mixed type plastics, which are then dumped in countries in Asia. There, they are usually recycled unsafely and to low standards, and often simply incinerated, landfilled, or leaked into the environment. This is driven by brutal, short-term economics: exporting is often cheaper than reducing, sorting, cleaning, recycling, or reusing plastics locally.

In 2017 China, fed up with being the Global North’s dumping ground, notified the World Trade Organization that it intended to ban imports of plastic waste.

Furthermore Malaysia, Thailand, and India have taken measures at the national level to ban, restrict, or reduce the import of plastic waste.

Numerous countries in the Global North have since been unable to cope, resulting in dramatic price increases for exporting, and more plastic being incinerated, sent to landfills, or stockpiled. It is time for measures that focus on reducing the overall global production and consumption of plastics, and redesigning plastics for reuse and quality, such as toxic-free recycling.

Cities and countries across Asia, from Mumbai to Taiwan to Vanuatu, are starting to introduce bans on single-use plastics. The EU recently adopted new laws reducing single-use plastics, including bans on several items and making manufacturers pay for waste management and clean-ups, and an Australian government parliamentary inquiry produced a much strengthened national waste plan.

This was perhaps an unintended but critical outcome of China’s policy to stop importing plastic waste: a greater understanding of the fact that recycling is not a solution to plastic pollution. Given the massive plastic waste trade problem, plus the fact that only 9 percent of plastics ever produced have been recycled, it is clear we need to tackle the problem at source by reducing production and holding accountable the corporations who profit from this waste trade.

The global trade in plastic waste is symptomatic of the issues with our current corporate trading system. Will it be regulated to protect people and the environment, or will rich countries remain free to dump their plastic waste elsewhere? It is clear Asia will no longer tolerate being a waste dump.  We must all be willing to confront this issue, by overhauling how we produce and consume plastics and breaking free from our addiction to plastics.

Mageswari Sangaralingam is a researcher with Friends of the Earth Malaysia/SAM.

Sam Cossar is a trade campaigner with Friends of the Earth international. He tweets from @samcossar.

Thailand Prepares to Strike Back Against COVID-19. Will It Be Enough?

Duterte Gives the Philippines a Choice: COVID-19 Jabs or Jail

David Brophy on the Alternative to Australia’s ‘China Panic’

Asia Will No Longer Tolerate Being a Plastic Waste Dump

By Mageswari Sangaralingam and Sam Cossar

Asia Stands up to 'Waste Colonialism'

Developing nations in Asia are no longer willing to receive metric tonnes of untreated, unsorted rubbish.

Women play a unique role in plastic management and face different, sometimes greater, risks. No solution is complete without their contribution.

There is No ASEAN Consensus on Myanmar

Two months on from ASEAN’s high-profile summit, the organization appears more divided than ever.

Why Are Indians So Angry at Bill Gates?

The latest backlash against the Gates Foundation in India is the result of years' worth of concerns raised by human rights activists and civil society.

Once considered the gold standard for COVID-19 response, Vietnam is now battling rising infections and a glacial vaccine rollout.

The fatality rate trails behind infections, so Pakistan’s morbidity rates will take awhile to fall.

It’s Official: China’s Longtime Ambassador to the US Is Leaving

Cui Tiankai announced his imminent departure this week. What does that mean for the China-U.S. relationship?

The current crackdown on mining goes even further in eradicating cryptocurrency activities from China’s economy.

Can Japan Fix the Gender Gap in Its Politics?

Japan remains hesitant to formally tackle its male-dominated political system. But one woman might beat the odds and force real change.