Philippine government officials were quick to negate the Washington Post report describing Marawi City as a “ghost town” more than a year after the 2017 Marawi Siege. Eduardo del Rosario, chairman of Task Force Bangon Marawi (TFBM), a government interagency created to facilitate the rebuilding process, said that the report is false because the city is now “alive and booming.” I went to Marawi City in March 2019 to see which of these contrasting narratives is closer to the truth.

Outside of ground zero, or the Most Affected Area (MAA) of the Marawi Siege, life seems to go on normally. On the way to the city’s main crossing, I notice heavy traffic, which del Rosario noted in his rebuttal. Vehicles crowd in the city center, and children in school uniforms cross the streets. Local shops are open for business, signaling the thriving economic activity this Islamic city in Mindanao is known for. The city is indeed “alive and booming.”

Ground zero, however, reveals a different story. Nature has already taken over the remnants of war as vines creep into the gaping holes of bombarded buildings and abandoned vehicles. Once in a while, a military truck will drive through the empty streets. Military personnel escort my group from one site to another and point out the dugouts where Islamic State-linked groups hid and stored their logistics supplies. The eerie atmosphere is distressing; this part of Marawi City is indeed a “ghost town.”

The opposing narratives have different objectives. The Washington Post article described the MAA to highlight the slow post-conflict reconstruction in Marawi City. It sent an ominous message meant to galvanize officials to hasten the reconstruction process. Meanwhile, the government shifted the attention outside the epicenter of the devastation to prove that the residents have returned and the city of Marawi has risen up from the rubble. This projects a message of hope for the people and highlights action by the authorities. Both narratives are true, but each without the other is also incomplete.

Caught in between these narratives are the Maranaos, the people of Marawi, who are yet to return to their homes.

In May 2017, an armed confrontation broke out in Marawi City between the Philippine government troops and IS-affiliated militant groups. What is now known as the Marawi Siege lasted for five months, rendering it the longest episode of urban warfare in the Philippines. President Rodrigo Duterte declared martial law over the whole island of Mindanao, and the Philippine military eventually defeated the militant groups. The aftermath of the siege saw more than a thousand people dead, thousands more injured, and hundreds of thousands becoming refugees in neighboring provinces. Although people have started returning to their homes, many residents are still unable to return, and government-led rebuilding has been slow.

Lying on the outskirt of the inner city, in Barangay Sagonsongan, is one of the transitional shelters sites assigned by the government for the internally displaced persons (IDPs) of the Marawi Siege. In front of the site is a tarpaulin sign illustrating the planned permanent village for the IDPs, superimposed with the face of President Duterte. It could have been mistaken for one of the campaign posters lined up along the highway connecting Iligan City and Marawi City, aimed at this month’s midterm elections. Right behind the tarpaulin sign are temporary housing units for the Maranaos. This scene is an emblematic reminder that in Philippine politics, political personalities often eclipse the real issues of everyday people.

The immediate task for the Philippine government is the complete clearance of unexploded ordnance prior to demolition, surveying, and reconstruction. As with all post-conflict rebuilding processes, a safe and secure environment is a prerequisite not only for the return of the people but also for the overall rebuilding process of Marawi City. However, compliance issues involving contracted parties have stalled the full recovery and disposal of the remaining unexploded ordnance. The demolition process has also been suspended after it was found out that the contractor for debris management is in violation of environmental requirements. Some residents also filed complaints against the contractor for demolishing what was left of their properties without first consulting with them. These sources of public discontent could run the risk of reigniting violence. With the inauguration of the Bangsamoro Autonomous Region in Muslim Mindanao (BARMM) on  March 29, 2019, the prospects of peace in Mindanao cannot afford a reversal to conflict.

Inside ground zero, an army sergeant who fought the militants takes me from one site to another — Bato Mosque, Saint Mary’s Cathedral, and the Islamic Center. Our last stop is the lookout point of Lake Ranao where the bullet-holed “I Love Marawi” sign still stands. It is a silent survivor of the conflict, tangible but voiceless, like the people who are yet to return. 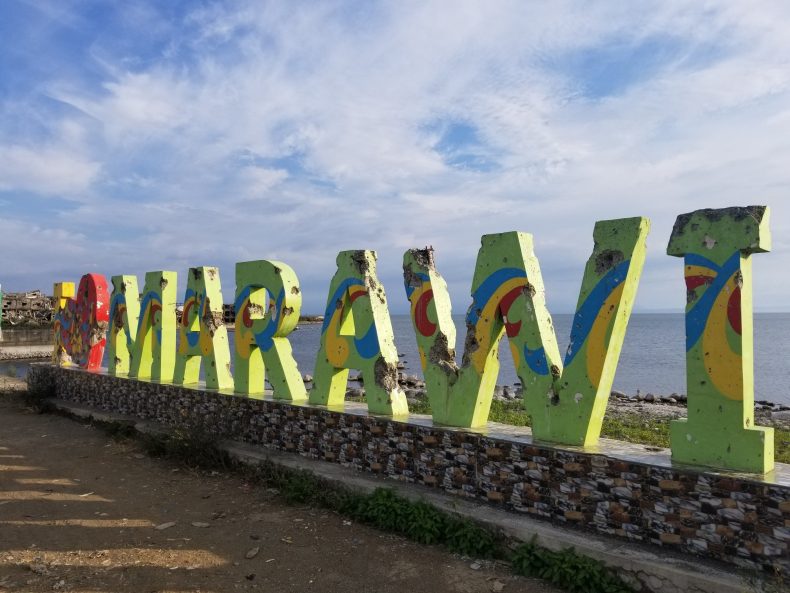 The bullet-riddled “I Love Marawi” sign. Photo by Dahlia Simangan.

Dahlia Simangan is an Assistant Professor of Peace Studies at Hiroshima University. She conducts research on issues related to post-conflict rebuilding processes.

The Strategic Patience of Dawlah Islamiyah in Mindanao

The rise of a new leader suggests that Islamist militants continue to pose a clear and present security threat in the southern Philippines.

Why would the Philippine government want to credibly commit to peace this time around?

Can ASEAN Work Together to Fight Regional Terrorism?

As the grouping turns 50, it needs to confront the region's biggest threat.

How Will the Taliban Affect Violent Extremism in Mindanao?

Violent extremists in the southern Philippines have generally remained aloof from global jihadist currents, but Manila should not be complacent.

By Ebrahim Noroozi and Rahim Faiez

In Afghanistan, those who were barely scraping by have lost everything to the recent earthquake.

Constitutional Changes Ahead for Uzbekistan

Mirziyoyev looks set to follow in his predecessor's footsteps, tinkering with the constitution to stay in power indefinitely.

Can Jacinda Ardern Save New Zealand’s Free Trade Deal With the EU?

While New Zealand is increasingly backing the West, the West is not fully backing New Zealand where it counts most: providing trade alternatives to China.