Sri Lanka is often portrayed as a country that fell into a debt trap as a result of public investment projects financed by China. One such investment project was Hambantota port, which was leased to China Merchant Port Holdings Limited (CM Port) for 99 years for $1.12 billion in 2017. This project is largely the reason as why Sri Lanka is widely cited as a clear example of getting trapped in Chinese debt and being forced to hand over assets with national and strategic importance to China. The general belief seems to be that Sri Lanka was unable to pay off the loans obtained from China to construct Hambantota port in the first place, and therefore had no choice but hand over the port to Chinese control to pay off the debt.

However, the real picture of Sri Lanka’s debt crisis, which is not often explained, is very different and far more destructive. Debt owed to China is in fact the tip of the iceberg, and that should make the debt crisis all the more alarming. The famous Hambantota port deal is not merely an issue of Chinese debt — Sri Lanka has much larger economic issues that go well beyond the debt owed to China.

It is true that the EXIM Bank of China funded the construction of Hambantota port and the project certainly was not an economically sensible decision at the time given the fiscal constraints of the economy. In fact, there were serious concerns about the necessity of constructing an additional international port in Sri Lanka, particularly one financed through borrowing at commercial rates, and whether such a port would be able to generate enough revenue to break even. Sure enough, Hambantota port was not making enough revenue to repay China when loan payments came due. However, the real reason Sri Lanka moved to lease the port to China goes well beyond the difficulties of paying off the loan installments on debt obtained to construct the port. Alarmingly, the Hambantota handover indicates a far bigger economic crisis underway in Sri Lanka.

The Sri Lankan government obtained several rounds of loans to construct Hambantota port from 2007 to 2016. All these loans were obtained from China EXIM Bank, most at commercial rates. However, each loan had a grace period of around five years and a payback period of 15-plus years. For this very reason, the loan repayments for Hambantota do not amount to a large portion of Sri Lanka’s external debt servicing payments; some loan repayments have not even started yet. Debt repayments for the loans obtained for Hambantota port amount to only around 5 percent of Sri Lanka’s total annual foreign debt payments, and even less among total debt repayments.

The economic reality is that Sri Lanka leased out Hambantota port to China largely due to a persistent balance of payment (BOP) crisis resulting from the reduction of trade over the years even while external debt servicing costs have been soaring. Sri Lank faced a severe shortage of foreign reserves in light of the upcoming debt servicing payments, due to the maturity of international sovereign bonds. Therefore, the country had to look for various avenues to obtain foreign currency inflows. Leasing out Hambantota port was one of the ways to increase the country’s foreign reserves.

Although Hambantota port was leased to CM Port, the loans obtained to construct Hambanota port were not written off and the government is still committed to loan repayments as per the original agreements. The money obtained through leasing Hambantota port was used to strengthen Sri Lanka’s dollar reserves in 2017-18, particularly in light of the huge external debt servicing due to the maturity of international sovereign bonds in early 2019.

Sri Lanka’s debt problem goes well beyond China. It is related to a change in foreign debt composition and structural weaknesses of the economy, such as an overall reduction of trade, the rise of protectionism, and the reduction of government revenue.

By the end of 2017, only little over 10 percent of Sri Lanka’s foreign debt was owed to China and most of that was in the form of concessionary loans. 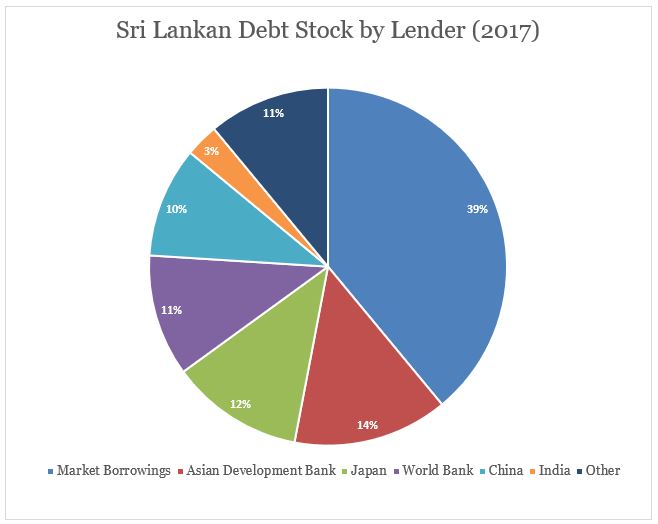 Data from the Ministry of Finance, Sri Lanka. as of the end of 2017.

Instead, the largest portion of Sri Lanka’s foreign debt was international sovereign bonds, which amounted to 39 percent of the total foreign debt as of 2017. These are commercial borrowings obtained from international capital markets since 2007, and such bonds have resulted in soaring external debt servicing due to the nature of the debt. Unlike in concessionary loans obtained to carry out a specific development project, these commercial borrowings do not have a long payback period or the option of payment in small installments. When sovereign bonds mature, it results in a significant increase of external debt servicing costs, as the entire face value of the bond should be paid once as opposed to paying installments for concessionary loans. 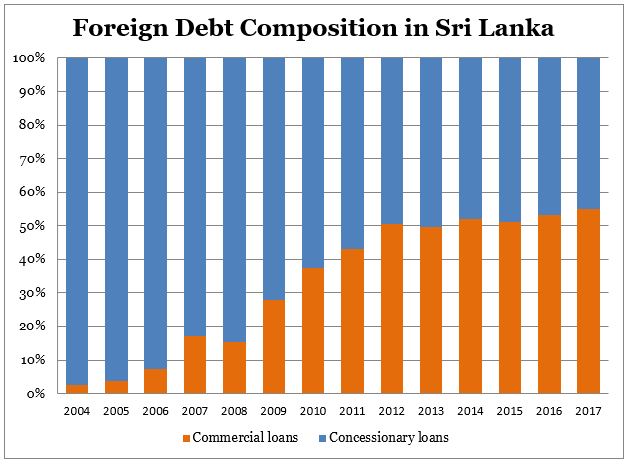 Data from the Central Bank of Sri Lanka.

The danger of rising external debt repayments is they require a large amount of foreign currency. To put it in simple terms, a country should have a sufficient amount of foreign currency inflows (through exports, FDI, or more external debt) to finance foreign debt repayments. Sadly, though, Sri Lanka has failed to increase exports or FDI by a sufficient margin to match its rising foreign debt repayment obligations. On the contrary, the country’s export-to-GDP ratio (including exports of both good and services) has declined from 39 percent in 2000 to 21 percent in 2017, raising serious concerns regarding external debt sustainability. Meanwhile, the foreign debt servicing-to-exports ratio, a major indicator of external debt sustainability, reached a peak of 28 percent in 2015. The ratio was only 10.6 percent in 2007 and had increased to 22.5 percent by the end of 2017. Since 2011, the foreign debt servicing-to-exports ratio has remained above 20 percent except for a slight drop to 19.7 percent in 2016. By 2017, Sri Lanka was compelled to increase the level of foreign reserves despite the unfavorable global economic environment for emerging markets in light of the pending maturity of sovereign bonds amounting to $5 billion, which are due between 2019-2022. 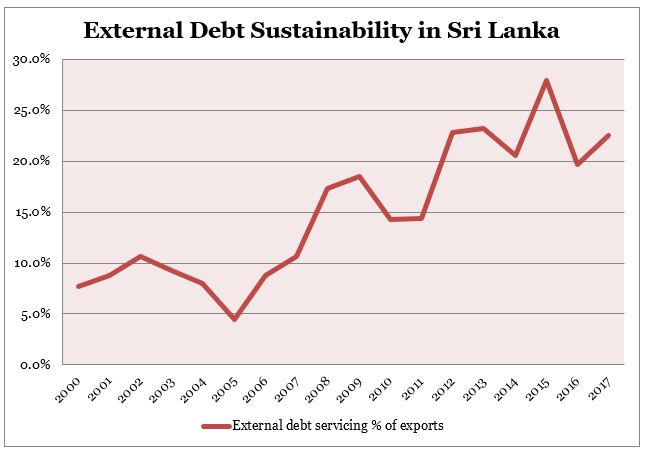 Estimates based on Central Bank of Sri Lanka data.

This scenario forced the government to seek out for various ways to raise foreign currency and leasing Hambantota port, which was not generating sufficient return on investment, was among the options. In addition to that, media reports have indicated that the government is planning to lease Mattala Rajapaksa International  Airport (MRIA), one of the emptiest airports in the world, also located in Hambantota, to India. Both these infrastructure projects were constructed using Chinese loans and severely criticized as economically nonsustainable investments.

It is true that, thanks to financing a number of infrastructure projects, the portion of Sri Lankan foreign debt owned by the Chinese has increased drastically during the last decade or so. From 2008 to 2012, approximately 60 percent of foreign borrowing has come from China.

However, having said that, Sri Lanka would have encountered concerns pertaining to external debt sustainability and persistent balance of payment (BOP) issues even in the absence of Chinese debt. Of course, there were serious concerns regarding the economic sustainability and the necessity of the projects financed by the Chinese at the time those were initiated. Yet the bigger issue behind Sri Lanka’s debt crisis was the choice to borrow from international capital markets at commercial rates at a time when the country’s exports were going down even while the government consistently failed to fix structural issues such as the reduction of trade, rising protectionism, and reduction of government revenue. With those structural issues, serious concerns regarding debt management are inevitable. Resolving the problem will require a consistent effort for reforms, which involves serious political challenges.

Untangling the truth about Chinese debt and Sri Lanka means cutting through some misleading media narratives.

Both the share and the type of loans from China are changing as Sri Lanka wrestles with persistent balance of payment issues.

Will South Korea Join the US Effort to Insulate Supply Chains From China?

Pressure from Washington to align with the U.S. decoupling effort is growing, but it's a tall order for South Korea.

2008 marked one of the earliest examples of the Chinese government's direct intervention on a state bill, through aggressive use of a WTO mechanism.

SIGAR on the Unsustainability of the Afghan Air Force

In a classified January 2021 report, SIGAR warned that the Afghan air forces were unsustainable without continued U.S. support. The newly declassified report explains why.