IClick, an online shopping company, based in Kabul, optimistically followed news on the peace talks between the United States and the Taliban group. The peace talks raised hopes for the end of the violence in Afghanistan — and the growth of iClick and other startups. But criminals, rather than terrorists, are now ruining hopes of business growth.

Every day, iClick receives dozens of orders for clothes and shoes to be delivered to the front doors of customers across Kabul city. But not all of the “customers” are buyers.

Hasebullah Nazari, 19-year old delivery person working for iClick, was supposed to deliver a pair shoes and return back safely. It sounds like a simple task – but not in Afghanistan’s capital. When Nazari arrived on a busy street in eastern Kabul the customer appeared, along with his friends. They circled Nazari and demanded that he hand over his smartphone and motorcycle. Nazari resisted. The customer then pulled out a knife and stabbed Nazari.

Bleeding, Nazari returned to the office without his money or his motorcycle. Hafizullah Shujayee, a sales executive for iClick, rushed to the scene and filed a complaint with the local police. But instead of giving assurances, the police officer replied, “These things happen every day. Just be careful next time.”

Even as Afghanistan’s capital, Kabul, has witnessed a significant reduction of suicide bombings and a sense of peace amid U.S.-Taliban talks, the city has increasingly been plagued by gun-wielding gangs and armed robbery. The city has turned into the capital of crime, where individuals and houses are robbed, businessmen are assassinated, and the children of rich families are kidnapped for ransom.

Afghan police have begun a war on criminals, but it is a struggle to provide safety in Kabul, whose residents have been burnt by war for four decades. Absolute poverty in densely populated Kabul leaves limited options for its mostly young population to survive. Some see few choices but to commit robbery using a knife or a gun.

IClick Chief Executive Officer Masiullah Stanekzai calculates that the company has lost around $1,000 to robberies. “We had created jobs for 20 young people and we could do more if we had safety,” he laments. “Small startups are the backbones of Afghanistan’s economy.” 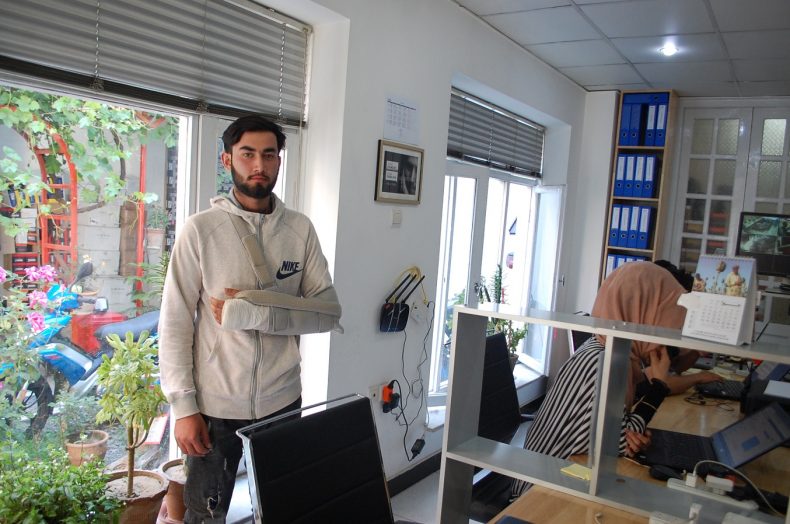 Hasebullah Nazari, a 19-year-old delivery person for iClick, was robbed and stabbed in Kabul. Image by Ezzatullah Mehrdad.

In a way, Nazari was lucky. Other criminal activities end in death for the victims. Just one street away from iClick’s office in downtown Kabul, a businessman was assassinated.

In March 2019, the neighbors of Murtaza Ahmadi, a money changer in Kabul’s stock market, kidnapped his 6-year-old daughter, Mahsa. Later when the police identified the kidnappers, they killed Mahsa and threw her body in the garbage.

In the middle of the night, unknown gunmen – thought to belong to a rival family — entered a home in the Kart-e-Sakhi neighborhood of Kabul and murdered seven members of a family, including children under the age of 10. Only one survived, badly injured.

In the dawn hours of May 28, armed robbers stopped Romal Ibrahimi and stabbed him to death.

“We have arrested many criminals,” said Fardaws Faramarz, spokesperson for the Kabul police chief. “The police arrested 10 suspects related to the killing of a family and also arrested two suspects in the killing of Mina Mangal,” a former journalist who was assassinated on her way to her office in the Kart-e-Naw neighborhood. Faramarz emphasized that police operations targeting criminals have been significant.

In late 2018, Amrullah Saleh was appointed as acting minister of Interior Affairs for a short period. He announced major reforms and plans to crack down on criminals. At that time, the Ministry of Interior Affairs publicly acknowledged that the police faced crime syndicates and alleged that the country’s top elites and warlords support and shelter criminals. The Ministry also released the identities of 1,500 people suspected of criminal activities and thought to collectively own a total of nearly 30,000 illegal arms.

By the time Saleh left the Ministry of Interior Affairs to run the re-election campaign for President Ashraf Ghani, a handful of those 1,500 people had been arrested or voluntarily turned themselves in to the police. The rest are still active in the capital and elsewhere in Afghanistan. And those alleged 30,000 illegal weapons are still being used to commit robbery, assassination, and kidnapping. 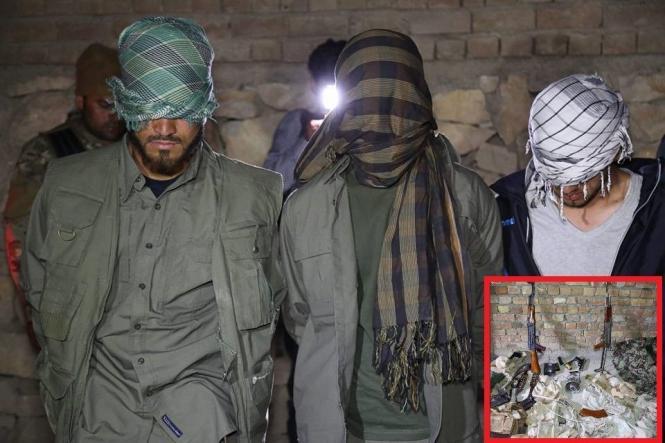 Apprehended criminal suspects, with an inset image of their seized weapons. Image courtesy of Khaama Press and reprinted here with permission.

“Organized crime has more intelligence than the national police,” acknowledged General Mohammad Davood Amin, a former Kabul police chief. “The intelligence section of the police should be professional officers to identify and crack down on criminals in the streets of Kabul.”

Afghanistan’s police have been bloodied by decades of insurgencies. Amid a raging war, the national police were established, trained, and deployed to fight on the front line against the Taliban, al-Qaeda, and now the Islamic State — not to fight criminals in the streets.

“The police’s duty is law enforcement [in cities], not fighting insurgents,” said Amin. “The police have been turned into a fighting force against insurgents, which resulted in [their] having the highest casualties among Afghan security forces.”

Amin pushed for reform during his time as police chief. He still calls for the professionalization of the police force and reforms stretching from the very top down to low-ranking police officers. He has also asked for more equipment for police forces to secure Kabul.

“One night we had an operation to arrest a criminal in Kabul,” recalled Amin. “We went there, but the target had moved elsewhere. I tried to track him using GPS and through his phone, but neither the Ministry nor intelligence agency could help us to arrest the big name of criminals.”

Reform within the Ministry of Interior Affairs and police forces includes fighting endemic corruption. President Ghani once called the Ministry of Interior Affairs the heart of corruption. In private conversations, officials admitted that many generals and police commanders did not seek to receive their monthly salary from the government because they had received too much money in bribes during that month serving on the police force.

However, in Kabul, Afghanistan’s wounded national police forces are tasked to secure a city that is vastly overpopulated. By some estimates, the population of Kabul has soared beyond 5 million.

“We are not enough to track criminals and arrest them,” said a local police officer, who asked to remain anonymous because he was not authorized to talk to the media. “In our district, for example, the population is around 7,000 but the total number of police officers is 200. Then out of 7,000 people, at least 1,000 of them are criminals. How can we do our job?” 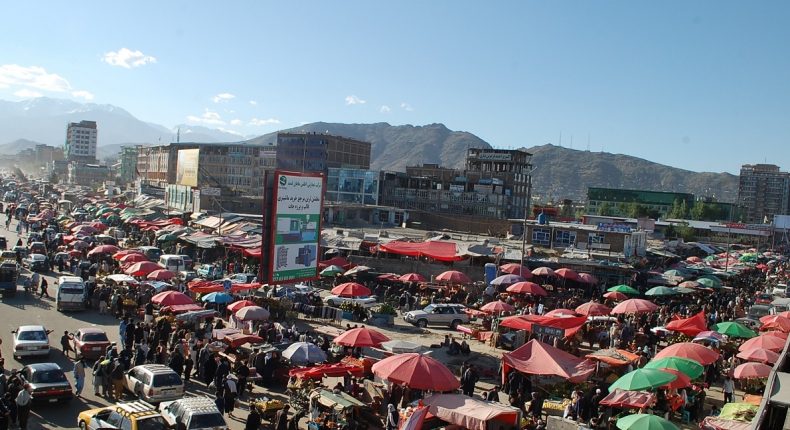 Kabul, the capital of Afghanistan, has turned into a capital of crime. Image by Ezzatullah Mehrdad.

“A poor nation does not have the power of choice,” said General Javid Kohistani, a security and political analyst. “They cannot make a decision and choose … that is why the graph of criminal activities is on the rise.”

Sayed Rashid, a 25-year-old prisoner in Pul-e-Charchi Prison, was born in a remote village in Maidan Wardak province, and later moved to Kabul, looking for opportunities. Instead of finding a good job, Rashid, who goes without a surname, ended up driving cars in the city.

Rashid’s income was too low and he began stealing phones, then started stopping people in the street to take their money. It did not make him much. He began to pick up good passengers and take them to faraway places, out of earshot. Threatened with death, passengers were forced to give everything to Rashid.

But he ran out of luck when one day he fought with the owner of a restaurant. The police arrested him and charged him with robbery. The court sentenced him to two years and six months in prison. When we spoke, Rashid had served two years and five months of that sentence. He was impatiently waiting to walk again in the streets of Kabul, but highly uncertain of how to make money.

Would he turn to robbery again? That option was still on the table.

Ezzatullah Mehrdad is a freelance journalist based in Kabul.

Afghanistan's capital is not even half as dangerous as everyone thinks.

When locals take their defense into their own hands, what does that mean for Afghanistan's central government?

Is the Taliban’s Campaign Against the Islamic State Working?

The Taliban claim to have defeated the self-declared Islamic State’s Afghan chapter, but exclusive information obtained by The Diplomat indicates that its success is not what it seems.