When teaching, I used to sketch a diagram to help my students visualize the importance of a “constructive engagement” of China by the dominant United States within the international system. China has played an increasingly active role in that system since the late 1970s, even while seeking changes and reforms in recent times when the existing institutional arrangements do not always best serve China’s ever-expanding national interests. Even so, unlike Japan and Germany prior to the major wars, China did not retreat from the international system, nor did it challenge the fundamental elements of the current international order, such as free trade, multilateral mechanisms, and the spirit of peaceful solution of various conflicts among countries. On the contrary, China has striven to preserve all these elements.

The sketch is basically a developed power pyramid where the United States sits on the top, over other major powers including China. It shows that, theoretically, there are three major forces that may ultimately decide the future of China’s “position” in the world power structure: China’s ongoing rise as an upward vertical move (F1), and two opposite horizontal forces, which represent engagement (F2) or disengagement (F3) by the dominant nation, i.e., the United States, which enjoys the largest proportion of power resources. In an ideal and simple scenario, where a rising China remains an active player and partner within the system, to engage it (F1 + F2) may help to stabilize the system and the power structure — but to disengage China (F1 + F3) may push the system to the brink and consequently bring Beijing to a true dilemma of whether to build a whole new system or not. 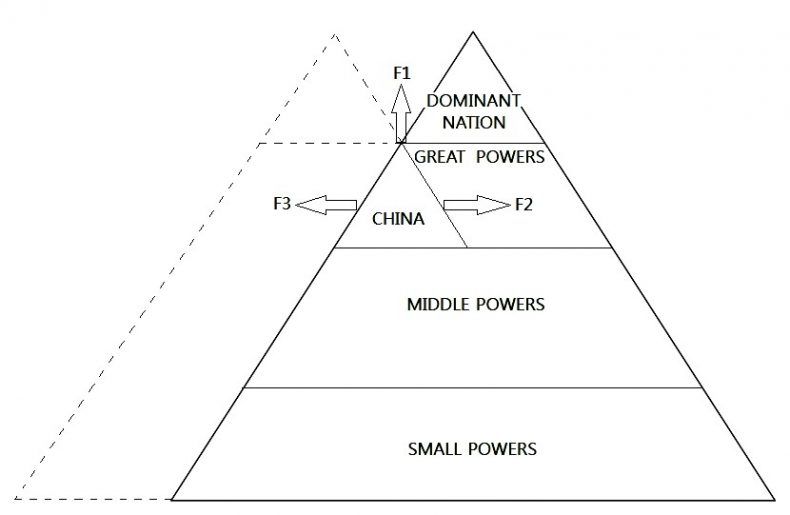 This is of course a simplified overview of the real situation, which is much more complicated. But the logic that engaging a rising China keeps the window of communication and coordination open is clear.

However, the trade war between Washington and Beijing has overshadowed many things between these two countries, including diplomatic negotiations, civil dialogues, and academic exchanges. The most worrisome part is that for the first time in the past four decades, during which the two countries have become increasingly interdependent with each other, the United States may seek to disengage China — at least, disengagement on a number of strategic issues might now be a serious option for top advisors and policymakers in Washington. The situation is becoming more complicated and dramatic.

The United States still enjoys a de facto leading role in the current international system, as the U.S. acting secretary of defense, Patrick Shanahan, just emphasized in his remarks at the Shangri-La Dialogue in Singapore. But under President Donald Trump, the United States itself also symbolizes the increasing strain on the system. The trend toward “Trumpism,” with its “authoritarian, nativist and populist positions,” as described by Cas Mudde, has already created chaos in the Western liberal order. So, it is worth asking: What does the current international system and order truly mean to Washington, when it claims that everyone else within the system — especially the Chinese — is taking advantage of the United States? Is alienating or even banishing a more confident China just a prologue to an American attempt to reboot or end the whole international system?

The international system is faced with a number of issues and challenges, but the real key is whether and how the dominant United States will work with other countries to fix it, rather than to topple or end it. To this end, Singaporean Prime Minister Lee Hsien Loong just shared his enlightening insights on the ongoing disharmony between the United States and China at the Shangri-La Dialogue 2019: “…It is well worth the U.S. forging a new understanding that will integrate China’s aspirations within the current system of rules and norms…The bottom line is that the U.S. and China need to work together, and with other countries too, to bring the global system up to date, and to not upend the system.”

Sending out “heavily armed” forces against angry protesters is exactly what China would do -- and is doing in Hong Kong.

The reality of what China’s rise means to different regional stakeholders must inform American policy.

A situation report from Washington assessing the U.S. whole of government opposition to China’s challenges.

US Allies Aren’t Buying Its New Strategies to Confront China

China presents many challenges, but bluff, bluster, and empty rhetoric will be seen for exactly what it is.