China’s bond market is unique in its design, implementation, and growth. Developing a corporate bond market to supplement and support a bank-oriented financial system has been a critical and necessary undertaking for China, but there remains a long path ahead. Confusing local credit ratings are one of the largest hurdles to understanding China’s bond market.

China has nine domestic rating agencies, five of which are at least partly state-owned – a clear conflict of interest given the large percentage of state-connected bond issuers. Even the so-called independent rating agencies tend to fit the profile of many private companies in China; while technically “private” from an equity ownership standpoint, their origins are somehow connected to the government and they tend to be controlled by a still-politically connected leader whose business model is closely aligned with the policy objectives of the state.

In addition to state connections at some agencies, one of the main problems has been unscrupulous business practices by rating agencies seeking to capture market share and profits and lacking the proper regulatory oversight. For example, Dagong Global Credit Rating Co. recently got into trouble for assigning high ratings to companies that subscribed to their expensive software packages. It is therefore not surprising that the reliability and trustworthiness of China’s credit ratings has been questioned. Another reason to question these ratings can be found in the instances of defaulted Chinese bonds not being downgraded until just days before their default, suggesting that the Chinese rating agencies lack an ongoing monitoring discipline. These precipitous rating downgrades, sometimes from AA or above straight to defaulted status, undermine investor confidence in the rating process in China.

Credit ratings in China are heavily skewed toward the higher end of the ratings scale. Of the 11,000 Interbank listed and rated bonds outstanding as of August 2018, more than 95 percent of the bonds received ratings of AAA to AA at time of issuance, and just 0.11 percent received a rating of BBB+ or lower. Such a ratings skew is not healthy. However, indications of change are afoot. Two domestic Chinese rating agencies have formed business alliances with internationally recognized rating agencies, and, in a notable move, Fitch and S&P announced in May 2018 that they plan to launch their own Chinese rating units. Chinese regulators granted approval to S&P to rate domestic bonds in January 2019. International rating agencies and their ratings are by no means without their own flaws; nevertheless, their arrival in China could introduce higher, internationally accepted standards to the rating process, and draw greater foreign participation to the Chinese bond market.

Despite the use of the same rating symbols, onshore renminbi-denominated Chinese bond ratings are in all likelihood higher than those that would be assigned by the likes of Moody’s, S&P, and other nationally recognized statistical rating organizations (NRSRO). In 2015, the People’s Bank of China (PBOC) released an illuminating paper that outlines the differences between domestic and international ratings. This paper explains the discrepancies as primarily due to the way the agencies give weight to certain factors. Factors such as asset size, profitability, and state ownership carry much more positive weighting in a domestic Chinese bond rating. Conversely, leverage has a far less negative impact on ratings. The paper concludes by illustrating the resulting rating differences for a sampling of investment-grade bonds: credit ratings from agencies headquartered in China on average lay in the AAA and AA category, which is around six to seven notches higher on average than those assigned by ratings agencies headquartered outside of China. Or put another way, a AA rating by a Chinese rating agency would generally parallel a BBB- rating from an NRSRO. Viewing Chinese bond ratings through this lens, Figure 1 shows Interbank bond ratings at time of issue and how these ratings might look if rated by one of the NRSROs. 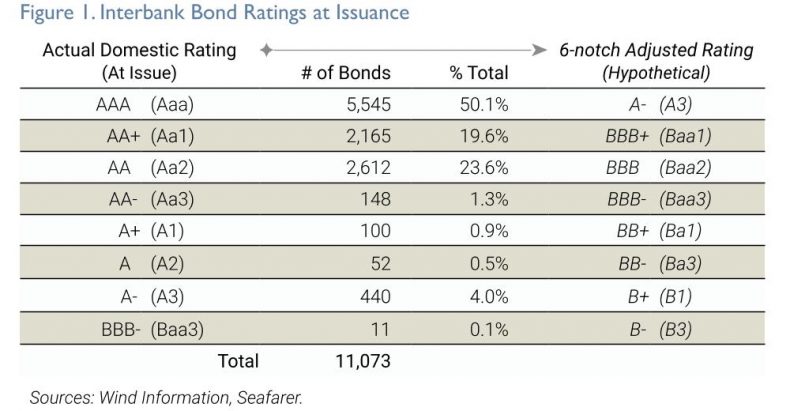 The lack of independence of the Chinese rating agencies is a significant concern for this asset class. However, once different ratings criteria and the notch difference relationship (as shown in Figure 1) is recognized, local ratings can be at least partially useful when evaluating the credit quality of a Chinese bond. China’s fixed income markets have grown to the point that they now constitute a large and important part of global capital markets, as evidenced by China’s inclusion into major global bond indices. The country’s efforts to establish large and liquid local bond markets in a relatively short span of time is a remarkable achievement – and a necessary one. China needs a robust bond market so that it can reduce reliance on its largely state-controlled banking system, enhance regulated and transparent channels for financial liquidity, and allow markets to play a needed role in long-term capital allocation.  Examining Chinese bond ratings and their evolution is a fundamental first step in understanding the Chinese bond market.

Kate Jaquet is a Co-Manager of the Seafarer Overseas Growth and Income Fund at Seafarer Capital Partners.

The Idiosyncrasies of China’s Bond Market

The ratings agency has ramped up the pressure on the already beleaguered economic authorities to act on growth.

Moody’s follows S&P and Fitch in upgrading the Philippines’ credit rating as the economy continues to impress.

Speculation that Russia might liquidate its yuan-based foreign reserves has spooked investors, resulting in the biggest month-to-month loss ever.