Have a glance at chess if you want to know a little bit ancient military warfare theory. Old Sanskrit treaties on this subject talked of four basic type of units: infantry, chariots, war elephants, and cavalry. Ideally – because Sanskrit treaties often presented an ideal model – there should be a proportion of four infantry units to one of each other type in a given army. This is reflected in chess, where there are four pawns (infantry units) for one of each other types of pieces. Chess, after all, was invented in ancient India, from where it spread across the globe with certain modifications.

A part of the game’s mechanics also reflect ancient warfare. The pawns are slowest and stand in the front line, defending the rest of the army; they are also bound to be sacrificed. The knights – which represent the ancient-period cavalry – are very useful right from the beginning of the game, as they are capable of agile and swift maneuvers, just like horse-mounted men were in real life. The bishops refer to the chariots, while the rooks represent the war elephants (once the most powerful unit in Indian armies). As war elephants were formidable, but much harder to maneuver, the rooks in chess are best used closer to the endgame, where there is more space on the board. Their movement in straight lines on the chessboard perhaps represents the cumbersome moves of the large animals on a battlefield.

And yet there is no direct translation from ancient Indian warfare theory to the chess rulebook. In history, war elephants were used to trample enemies but their flaw was that they could easily panic, none of which is reflected in chess. In the game, the knights are the only figures that can jump over enemy or friendly units, which cavalry cannot do. It is rather that real battlefield experience and ancient theory of war was used by the creators of chess as an inspiration, not a steel frame of rules, from which a coherent and highly playable game was built. It is the game’s own rules, together with the fact that it is context-free –  you do not really have to know ancient Indian warfare to play it – that made it universal.

Games do not precisely reflect the reality or the thinking of a certain place and time, but some games do reflect these to various degrees. A game is not supposed to be an academic treatise. It has to be playable. The Monopoly game reflects a certain spirit of rampant capitalism – and was actually created at the beginning of the 20th century to illustrate a certain economic theory – but nobody expects the board game to recreate the character of free market economics in detail. At some point, while devising a game, one must jump over complexities and details and use reality as a general inspiration to work out abstract rules, which are to follow a logic of their own, rather than follow all the rules of real life.

With this in mind, let me teleport myself through time, but not space, to modern India, which recently witnessed the release of a new board game called The Poll. The Poll: The Great Indian Election Game, is the brainchild of Abeer Kapoor and an ambitious and detailed attempt to reflect the complexities of Indian politics through a board game. In a way, like chess, it recreates Indian warfare – only that today’s battlefield is a constituency during the election campaign, with parties replacing the armies. Being both a board- and card-game geek and an avid follower of Indian politics, I could not miss that chance to feed both of my passions and give it a try. 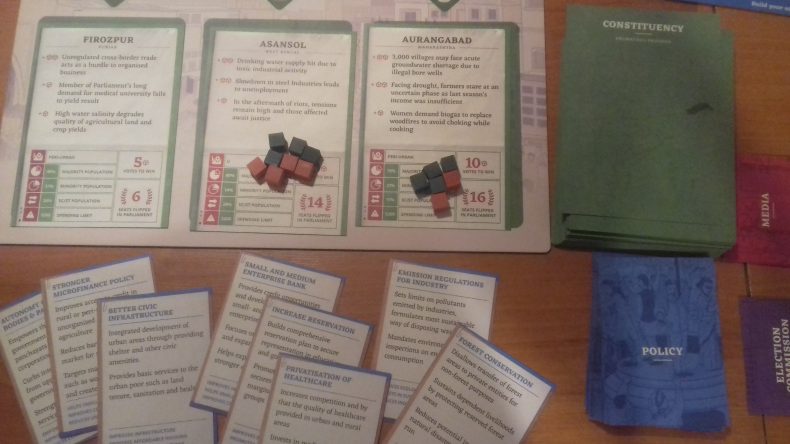 The cards and pieces of The Poll. Photo provided by the author.

The Poll puts one in the position of a party leader: As there is a parliamentary election to be won, players take out cards representing various constituencies and struggle to win as many seats from them as possible. As each constituency is troubled by its own specific challenges, the players must select the right policies to promise to voters and apply the right electoral campaign strategies (including dirty tricks), all of this while taking into consideration limited resources and the threat of being caught red-handed breaking the rules.

Unlike chess, however, the game is deeply contextualized. Rather than using Indian politics as a reference point to create universal rules, it documents its particularities. The downside is that the better you know this reality, the easier is to understand certain aspects of the game (at least the descriptions of issues on constituency cards). The plus side is that the game may perhaps be used to promote knowledge of this subject in new circles. It may gain less popularity outside South Asia, but at the same time I can envisage it being used by a professor during an undergraduate course about Indian politics.

As a player, I find its advantage in the tactical thinking it fosters, and the semi-flexible mechanism of declaring policies to solve diverse issues (the player must really argue how his policies will solve real problems, talking to other players as if they were the electorate). There are flaws, however: The Poll looks like it was printed in haste and is troubled with editing issues on the cards. Its rules should also be laid out in a clearer form and I would consider rectifying certain mechanisms in a later edition (I do not see, for instance, how other players can be persuaded by each player’s declared policies, as they take the role of both the electorate and the competing parties).

How does The Poll, being such an ambitious and detailed attempt, reflect Indian reality? Board games are a part of popular culture, and as such, they are a way of living through our reality, of digesting it, and of expressing our feelings about it.

Let me now try to imagine I know precious little of India, its society and politics, and that I am basing most of knowledge of these fields on playing The Poll. What would I have concluded? (1) That it is impossible to win elections without digging into the local issues, and without going out from the large cities to the rural poor and understanding their problems. (2) At the same time, the best policies will fail if the party cannot sell the narrative and convince the voters it will deliver better than others. The schemes, general or detailed, must be first of all marketed well. (3) That money and media are all-important and eventual success is impossible without the former. (4) That some states are more significant than others due to the number of seats they possess in the parliament. You can’t focus equally on every region – the right allocation of resources and efforts is crucial for victory. (5) Finally, that communities, communal tensions, an influx of foreigners, and tensions with other countries may be exploited for political gain.

Did the author of the game get anything wrong? I do not think so.

One Federation, One Election? Narendra Modi’s Push for Simultaneous Elections in India

The (unlikely) introduction of simultaneous elections in India would favor the richest national parties at the expense of regional parties.

What Can the Imbalance in the BJP’s National vs Regional Popularity Tell Us?

The BJP supplies 55 percent of lawmakers in the federal Parliament but just 31.6 percent in state legislatures.

Kashmir, Pulwama, and Pakistan: Navigating Islam and Citizenship in India

By Aman Madan and Hari Prasad

For segments of the country’s Hindu population, Muslim loyalty to the nation has always been suspect.