The first two hours of the protest march that took place in the Kwun Tong district of Hong Kong on Saturday afternoon offered no indication that the day would end in tear gas and petrol bombs.

Indeed, the demonstration, which had been given legal sanction by Hong Kong authorities to proceed, was peaceful, but purposeful. Demonstrators, most wearing black, and many wearing face masks to thwart the ubiquitous face-recognition systems that have been installed in Hong Kong, mostly did nothing more than chant anti-government slogans and carry posters and placards expressing their discontent with various aspects of Hong Kong’s political relationship to the Chinese Communist Party (CCP)-controlled government in Beijing.

As provocative as that sounds, it has become Hong Kong’s new normal. This has been going on for 12 weeks now, ever since an extradition bill was introduced in Hong Kong’s legislature, known as LegCo, which would have made it legal for Hong Kong citizens to be extradited to mainland China to stand trial for crimes purportedly committed there. 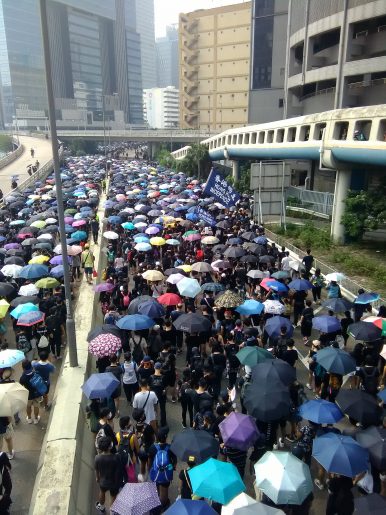 Protesters wind their way down Hong Kong streets during the march on August 24, 2019. Photo by Bonnie Girard.

As a tourist on Saturday afternoon, walking along the sidelines of the protest as it made its way through the largely deserted streets of the industrial district, I was struck first by the diversity of the protesters themselves.

Young parents brought their children, and graying middle-aged couples walked hand-in-hand. As chants died down in one section, an elderly woman passionately kept them going among the youthful cohorts who flanked her.

And among the crowd there were clearly some imposters, as well.

An hour-and-a-half into the event, a small group of six men and women in their 30s and 40s came alongside me and removed their black face masks in order to talk among themselves.

The woman, who was evidently a leader of the group, not only spoke to her colleagues in Mandarin, but did so in a distinct and unmistakable Beijing accent.

Hong Kongers speak Cantonese and were chanting in Cantonese throughout the march. Anyone speaking the Beijing dialect of Mandarin likely had other reasons than supporting the protest for being there.

The woman looked for a moment at me, but discounted that she might have revealed herself, as she saw that I am not Chinese.

Mostly, the marchers seemed quietly determined, and resolute in their purpose.

Few of the over-40 demonstrators wore face masks. Surveying the crowd, it seemed there was a direct correlation between age and face masks. The older the marcher, the more likelihood there was that he or she would not be wearing one.

One older gentleman, for instance, was carrying a flag exhorting “Hong Kong independence.” Not only was he maskless, but he grinned and posed for photos upon request. Clearly he was proud to have his message associated with his visual identity. Speak your mind and damn the torpedoes.

The under-30 crowd, however, have full lives ahead of them. They are just as brave, but far more vulnerable. If things go as they are likely to go, with increasing control from Beijing replacing Hong Kong’s freedoms one-by-one, much of Hong Kong’s younger population has few or no options.

If they are not college-educated, they have little opportunity of emigrating, unless they strike it rich. Those in the professional class have more choices, such as Canada, Australia, and to some extent, the U.K. and the United States. But competition is heavy for fewer and fewer immigration slots. 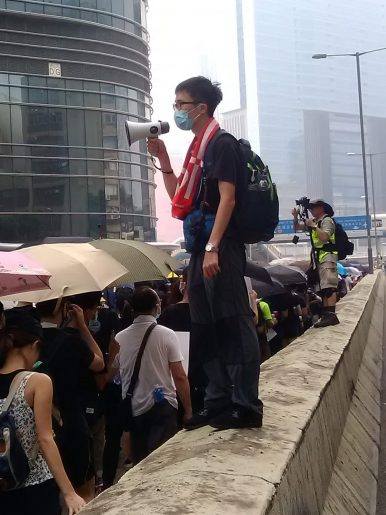 That means that unless they cover their faces, they will forever be known by both Hong Kong and Beijing for having protested Beijing’s rule.

The Basic Law protecting Hong Kong’s freedoms runs out in 28 years. Some of the protesters are in their late teens and early 20s. By their late 40s and early 50s, in the prime of their lives, they could find themselves being held to account for their actions and statements this year, if the Communist Party still rules China as it does today.

(Later in the day, as the protest turned violent, lampposts fitted with what the government says are weather and traffic-monitoring devices were destroyed by protesters, one cut down at its base in spectacular fashion.)

Chinese state-owned media has doubled down on the claim that “foreign forces” are behind the demonstrations. I saw nothing to support this. On the contrary — if foreign governments are involved, a new strategy is needed, as they seem to be making little impact.

One white-haired Western man marched with the crowd, waving the Australian flag. One Hong Kong Chinese carried an American flag, and another carried the last flag of Hong Kong as a British colony. Later, as the crowd, which swelled to thousands, took over a major thoroughfare, a group of five or six American flags was planted near a barricade, on the back side of a dumpster. Hardly an auspicious showing of foreign intervention.

Bottles of water and first aid crews were the only signs of a support organization behind the protest. Rather than using sophisticated sound equipment, protest leaders spoke from tinny-sounding, hand-held loudspeakers. Marchers carried little battery-operated fans to combat the sweltering heat.

In all, the impact of Saturday’s demonstration was made by the people of Hong Kong themselves, and to suggest otherwise is to discount the courage, the convictions, and the dignity that are driving them.

Is it too little, too late?

Despite the largest march in months, Carrie Lam says she cannot accept the protesters’ remaining demands.