Silk Road of Democracy: Anti-Communist But Not Anti-Chinese

The notion of multilateral cooperation is embodied by emerging concepts proposed by the DPP following the trip to Dharamshala, including the “Silk Road of Democracy” (SRD) and “Democratic Arc,” which seek to forge stronger connections among Taiwanese, Hong Kongers, Tibetans, Uyghurs, as well as Chinese supporters of democracy within the country and overseas.

While the image of the historic Silk Road is often evoked by China in its Belt and Road Initiative (BRI), the “Silk Road of Democracy” adapts this Sino-centric lexicon to convey an entirely different message. Whereas the BRI is used to export Chinese totalitarianism, the SRD seeks to import democratic values toward the Chinese public by actively engaging in friendly dialogue, launched from locations abroad and areas traditionally considered on the “margins” of the Chinese sphere of influence, while also possibly emphasizing unique locations such as Kinmen and Matsu – island counties located off the coast of China’s Fujian province that are administered by the Republic of China government on Taiwan.

Among the core aspects of the SRD is the notion of “anti-Communist but not anti-Chinese” (fangong bu fanhua), which extends an olive branch to the people of China. Rather than being interpreted as a critique of Chinese culture or ethnic Chinese identity, the SRD concept is against totalitarianism but supportive of the Chinese people; it is critical toward the CCP regime, but encourages exchanges with ordinary Chinese citizens based on a principal of inclusiveness.

The cross-fertilization of social movements has played a crucial role among activists from Hong Kong and Taiwan, especially among an entire generation influenced by the twin movements of 2014 — Taiwan’s Sunflower Movement and Hong Kong’s Umbrella Revolution. The benefits of strong Taiwan-Hong Kong ties have been evident in the ongoing anti-extradition bill protests in Hong Kong, which receive overwhelming support from all sectors of Taiwanese society.

Likewise, the DPP’s meeting with the Dalai Lama was the natural outcome of a series of related initiatives. In March, Secretary General Luo Wen-jia attended a march in Taipei commemorating the 60th anniversary of the Tibetan Uprising. In April, the DPP released video interviews with prominent Uyghur activists visiting Taiwan, which discussed the concentration camp crisis. From June to August, President Tsai Ing-wen and the DPP administration continued to voice strong support for the Hong Kong protests.

Regarding democracy in China, activities in Taipei commemorating the 30th anniversary of the Tiananmen Massacre in early June also reached new heights in terms of participation and media exposure, including a highly publicized meeting between President Tsai and Chinese pro-democracy activists including Wang Dan, Wang Juntao, Zhou Fengsuo, Fang Zheng, Wu Renhua, and others.

Shifting Views on Chinese Democracy: From Ethnicity to Security

Growing concern for China-related human rights issues marks a decisive shift in public discourse within Taiwan, especially among independence-leaning groups. In the past, some pro-independence groups were relatively disinterested toward the democratization of China, partly based on the urge to formulate a distinct Taiwanese identity, while also attempting to avoid clichéd tropes of “supporting our Chinese compatriots” employed by Taiwan’s own authoritarian Chinese Nationalist regime. A similar indifference toward China’s democratization has also grown in Hong Kong, especially among the younger generation, in stark contrast with a previous generation of Hong Kong pro-democratic leaders who strongly supported the Tiananmen protests.

However, updated arguments in support of Chinese democracy may provide a different approach, one that has renewed support from many young Taiwanese. From this perspective, regardless of ethnic or national identity, Taiwanese support for human rights in China should naturally be based upon universal values. Moreover, when more ordinary Chinese citizens share the same values as Taiwan, the result would be better cross-strait communication, meaning that Taiwan’s security would be strengthened as well. With these strategic interests in mind, the Silk Road of Democracy creates a common goal for Taiwan to work with like-minded partners, including with other groups threatened by the CCP regime, while also creating a framework of cooperation for Indo-Pacific countries that share the same values.

On the other side of the political spectrum in Taiwan, the Chinese Nationalist Party (KMT) has become alarmingly silent on issues related to human rights or democracy in China, Hong Kong, and other regions. This indicates how far the KMT has moved away from its anti-communist roots, while also raising doubts about whether the KMT is willing to safeguard the Republic of China – or “Free China” – and its democratic institutions. 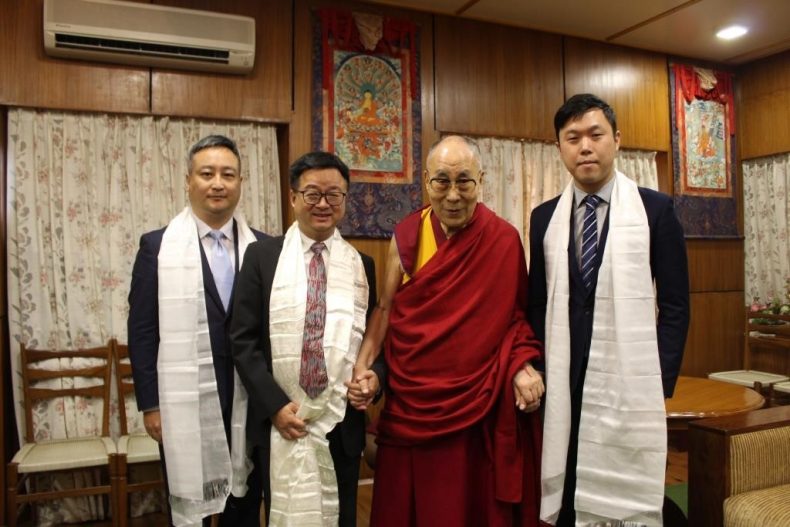 The DPP delegation meets with the Dalai Lama in Dharamshala, India during a visit in July. Members of the delegation include Secretary General Luo Wen-jia (second from left), Director of Public Relations Hsieh Yu-li (first from left) and Spokesperson Lii Wen (first from right). Photo by Luo Yi-ting.

Recent criticism toward the DPP from the Chinese press ludicrously compared the DPP’s efforts to build regional connections to Japan’s wartime efforts to establish Manchukuo – the historic puppet regime in Manchuria – even claiming that the goal of the DPP is to “dismember China.”

Nothing could be further away from the truth. As Secretary-General Luo Wen-jia mentioned during an interview with the Tibetan media, “We share common values and face a common threat; we hold a common conviction, and we can work towards common goals.” The commonly held goal here, of course, is not to “dismember China” or even to propose any particular political arrangement with China, but rather to actively promote human rights values in the region.

This is also evident in the Dalai Lama’s comments on Tibetan democracy. During the recent meeting with the DPP delegation, His Holiness emphasized that with longstanding parliamentary elections since 1960, and the introduction of direct elections for the Tibetan leadership in 2011, the Tibetan government-in-exile’s experience in putting democracy into practice could provide a positive example for the Chinese people to learn from. From this perspective, democratic values could serve to strengthen friendly ties between Taiwan, Tibetans, and the Chinese people as well.

The unprecedented scale of the Hong Kong anti-extradition bill protests has grabbed the attention of the general public in Taiwan, therefore creating a window of opportunity to rally public support for China-related human rights issues. Public discussion about the Uyghur concentration camps has also been steadily increasing. Hopefully, this creates fertile ground for regional dialogue along the “Silk Road of Democracy” in the future.

Wen Lii is Spokesperson for the Democratic Progressive Party, Taiwan. He is an analyst on regional security issues and Southeast Asian affairs.

How Taiwan’s History Illuminates the 2020 Election

By Evan Dawley and Wayne Soon

Taiwan at the Crossroads of History

The future of democracy hinges on inclusive partnerships among like-minded democracies and stakeholders.

One can attribute many of China’s current achievements and problems to policies initiated during Jiang’s tenure.