Western cultures have a serious problem with Asian elephant tourism. Within many circles, there is a continued outcry to stop all elephant riding, elephant bathing, and elephant shows, deeming them all inherently cruel. Indeed, if you ask many foreigners, they will passionately proclaim that all elephant tourism in Southeast Asia should be banned. But this mindset fails to give practical alternatives to the reality of endangered species conservation in developing and least developed nations. Nor does it acknowledge the conservation benefits that captive elephant management brings.

Concerns over elephant cruelty come from a good place; never before has action and awareness for species conservation been more essential in natural resource management. Activities that are harmful to elephants are fortunately being phased out at most tourism ventures. But the common concerns related to the impact tourism has on captive elephants have become misguided and inflated. Inexplicably, Western tourists and associated media only absorb a small percentage of the overall context when it comes to elephant-based tourism.

Nobody wants a captive elephant to suffer. Yet many Westerners have an unshakable inability to accept that riding an elephant is not torturous. The comparisons between riding a horse, camel, donkey, or elephant are rarely examined. The main difference in applied terms is the national and cultural contexts in which these animals are utilized. Camel riding in Broome is seen as good, romantic even. But all elephant riding in Thailand is bad. This is sadly the Western narrative that is continually perpetuated in the media.

In Australia, we grow up with pony rides offered at every local festival. Horseracing has been the national pastime since European settlement, even awarded its own public holiday (of course the questionable actions of the Australian racing industry have only recently come to light). “The Man from Snowy River” is a legendary Australian folktale of a man capturing and “breaking in” a wild horse. Yet this is viewed as a tale of Australian heroics, not a native savage ruthlessly destroying the spirit of a wild animal. 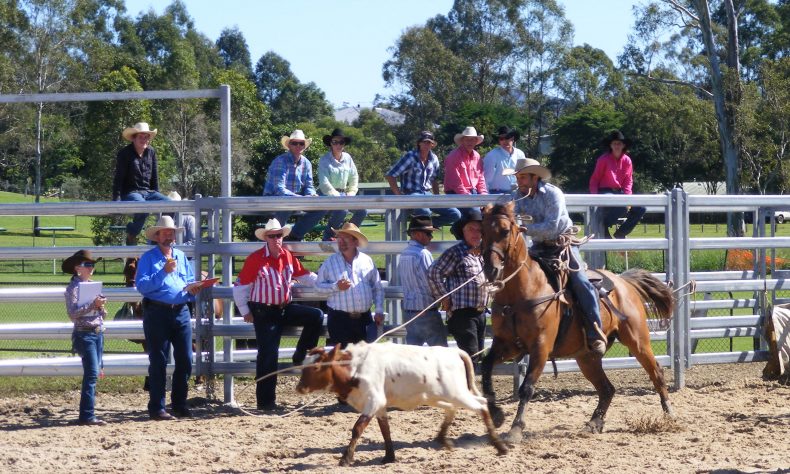 A horse and calf demonstration in Brisbane, Australia. Photo by Ingrid Suter.

The point of this article isn’t to demonize Western values. International tourists have huge potential to help create wonderful change. But there is an unconscious bias and stubborn viewpoint that still exists within some foreign conversations: the assumption that people overseas cannot look after their elephants. The longstanding historical and religious interrelationship between elephants and many Asian cultures is not relatable. We simply do not have the same spiritual and religious connection to another species within in our own cultures.

The stereotype of all captive elephants being mistreated is continually propped up by animal rights groups, citing old reports and images that are never critically analyzed by journalists, despite often being factually incorrect. Of course, there are sadly mahouts that harm elephants. There are over 10,000 captive Asian elephants; there will be awful individuals that inflict damage. These mahouts should be fired immediately as they bring the entire elephant community into disrepute. Individual cases of animal cruelty should be viewed as just that, as they are in other countries. But logic and reasoning are not afforded to the bulk of staff that caringly manage captive elephants on a daily basis. Western perceptions of Asian elephants compartmentalize elephants into two positions: No elephant belongs in tourism and all elephants should go back to the wild.

Again, the desire to release elephants into the wild comes from a compassionate position. But it is clear that the vast majority of captive elephants cannot currently just be set free from tourism, nor can they be returned to the wild. In reality, Asian elephant numbers in the wild are in decline. Poaching is rampant; agricultural and plantation concessions continue to encroach on the boundaries of protected areas. Human-elephant conflict is an ongoing threat to wild elephants and local communities. So why are Westerners calling for elephants to be released? Where they will all go and how their safety will be guaranteed? No one has answers for those questions. Returning the majority of captive elephants to the wild would be a death sentence.

Successful captive elephant management on the other hand, supports breeding programs, educates the masses, facilitates research into disease eradication, and provides jobs and opportunities for impoverished communities who may otherwise face poverty. Some mahouts hire security guards to watch over their elephants at night, keeping them safe from poachers. The notion that all elephants are better off in the wild is sadly ignorant of the current realities of life. It is an irresponsible and short-sighted position to be maintaining.

In the future, elephant habitat may be restored and afforded stronger protection. Communities may not be as agrarian; human-elephant conflict and poaching may decline, and elephants can be successfully reintroduced into the wild. This is the long-term goal that all conservationists aspire to achieve. But until that time, it is critical that we protect and conserve to the best of our abilities the individual animals that we have right now. And that means supporting elephant tourism through the continued improvement of elephant welfare at elephant camps.

Western tourists should absolutely care about elephant welfare. But acknowledgment and support is needed for the positive changes that are currently occurring. Showing concern for elephants can be redirected into choosing a quality elephant camp, rather than boycotting all elephant camps. Tourists should support camps that meet stringent, proven elephant welfare criteria. Support camps that have captive breeding programs and good environmental enrichment for their elephants. Encourage the camps that improve education rates and provide ongoing training for their mahouts.  Support camps that pay their staff a living wage and employ people from local villages. Western tourists should show the local government support for their conservation efforts, and believe in their abilities to create positive change and industry reform. Because simply saying that all elephants shouldn’t engage in tourism and should be returned to the wild achieves nothing.

Dr. Ingrid Suter, Ph.D., is the co-founder of Asian Captive Elephant Standards, an organization that assesses and audits elephant camps to ensure they are operating at the highest standard. She has worked in and studied captive Asian elephant management for over 10 years.

Elephant Roadkill: Thailand Grapples With Pachyderms on the Pavement