More than 500 Malaysians marched on Saturday in the hazy air of Kuala Lumpur for the MYClimateStrike, part of a series of climate strike rallies held worldwide between September 20 and September 27.

Protesters displayed banners largely concentrating on the forest fires in the region, a yearly occurrence for almost four decades, and the subsequent decreasing air quality. They urged the Malaysian government to take legal action to curb environmental degradation and asked for a system-wide paradigm shift. 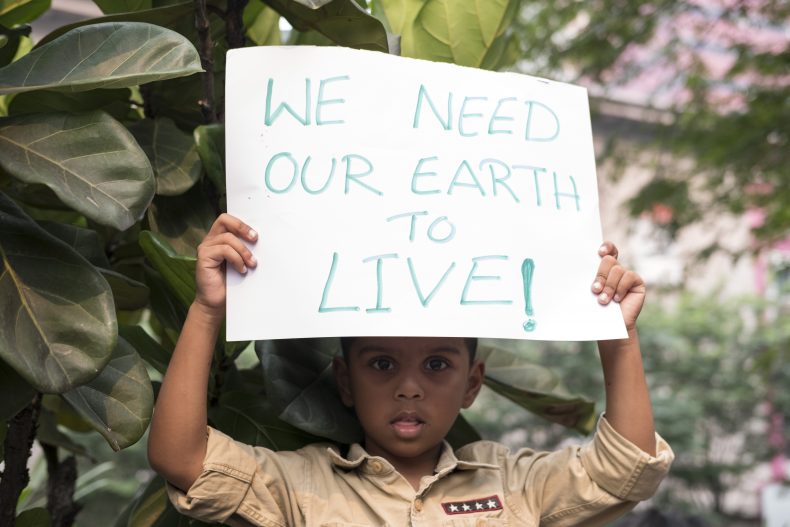 Several children participated along with their parents in the Climate Strike march in Kuala Lumpur, calling for immediate action for a safer future of the planet. Photo by Alexandra Radu.

Along with the global messages “There is no planet B” and “System change not climate change,” banners like “Tree plantations are not real forests” and “Let us breathe freely again” drew attention to the main environmental degradation effects that Malaysians deal with on a daily basis.

“We have been seeing there is a lot of climate pressure outside Malaysia and I think this is the best way to push for the climate agenda in Malaysia. We demand the government to take a more active stance on the the environmental and climate degradation in Malaysia, we want them to declare that this is a climate emergency,” said Nadia, cofounder of KAMY.

The group pleaded for the political and media silence on the climate emergency in Malaysia to break in order to increase public awareness about the issue. 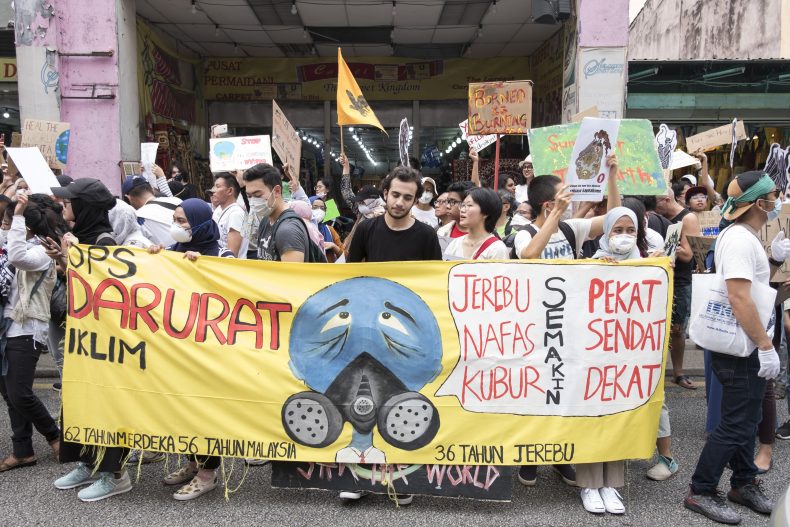 Protesters hold a large banner drawing attention to the ongoing air pollution in the region. The banner, written in the Malay language, says “Operation Climate Emergency. The haze is thicker, the breath is tired, the grave is closer. 62 years of independence, 56 years of Malaysia, 36 years of haze.” Photo by Alexandra Radu.

“We want to increase the visibility of climate crisis in Asian countries and the Global South with a focus from Malaysia. This is a time to show that climate crisis is not only about icebergs, glaciers, it’s also about the forest fires. It’s really important because there is a lot of haze, the pollution that we are breathing right now is simply poison and this has been going on for the past 36 years and this is the climate crisis, the climate reality that we are facing now. It’s not the future, it’s right now,” she added. 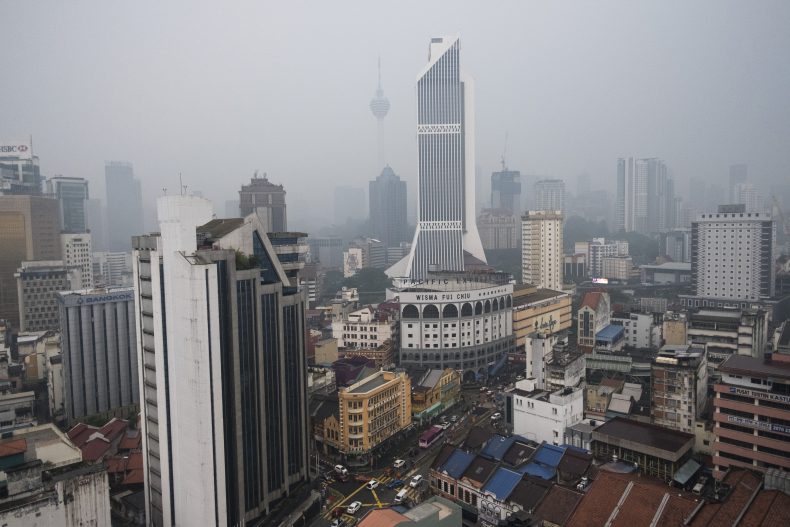 Kuala Lumpur city center has been shrouded in haze for more than one month. The transboundary haze is a yearly occurence, this year worsened by the El Nino weather pattern that has left the region almost dry for several months. Photo by Alexandra Radu.

For more than a month, parts of peninsular Malaysia and Borneo have been shrouded in haze from open burning in the region. Most of it comes from peat and palm oil plantations and forests  burning in Indonesia. The burning has sparked intergovernmental tensions, with Malaysia accusing Indonesia of transboundary pollution. Indonesia has denied full responsibility for the issue, but also stressed that it is working to manage the fires.

In an effort to stop the burning, Indonesia deployed more than 9,000 people to fight the fires which are still raging on the islands of Sumatra and Borneo. On Friday, September 20, the total number of hotspots in Indonesia increased to 5,086 from 4,077 on Thursday, according to data from the Indonesian Disaster Mitigation Agency. 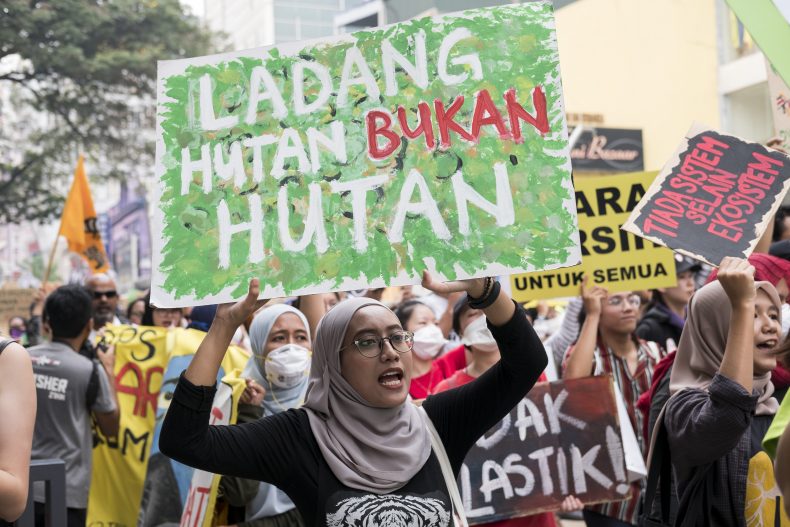 A protester holds a banner saying “Tree plantations are not real forests” during the Malaysian Climate Strike march in Kuala Lumpur. Photo by Alexandra Radu.

Kuala Lumpur has been in the top five most polluted cities in the world over the last two weeks, according to the Swiss live API update website AirVisual. With API readings over the 200 “very unhealthy” limit, schools were closed last Thursday and Friday all around Kuala Lumpur and the neighboring regions.

The situation is expected to be relieved in the following weeks with the arrival of the monsoon season that would end the months of extended drought caused by El Nino weather pattern. 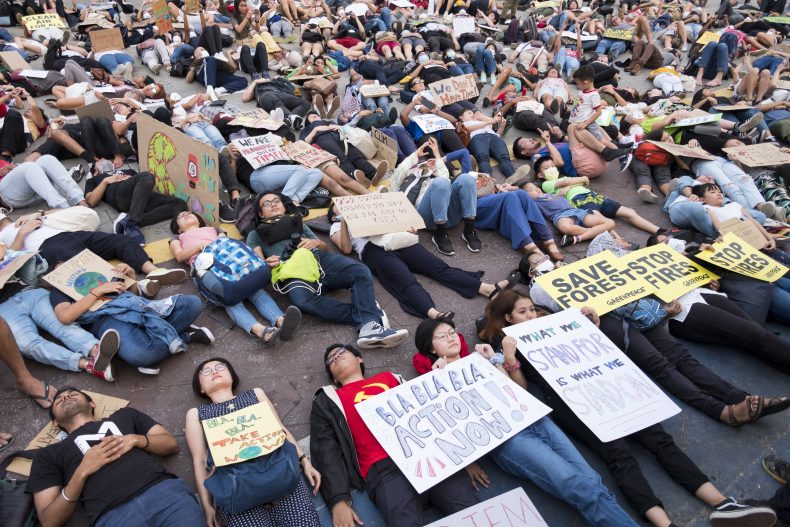 Protesters participate in a die-in during the Malaysian Climate Strike march in Kuala Lumpur. Photo by Alexandra Radu.

Alexandra Radu is a photojournalist based in Kuala Lumpur. Her portfolio is available here.

Malaysia may forgo an opportunity to enter the lucrative market in favor of environmental protection.

One marine park in Malaysia is trying to find a collaborative solution to Southeast Asia’s environmental woes.

By Sylvain Ourbis and Albert Shaw

Taking a closer look at a sultan's grand $100-billion megaproject in Johor.

Malaysia’ officials wage a war of words over the country’s rainforests. Will politics save them?

From well-known independent outlets to bloggers, the country's vibrant media are under increasing threat.