Born in the Philippines, but raised in Japan, Hánna has for the last ten years been active as an independent singer-songwriter in Japan and overseas. Her thematic focus on the various forms that love can take have seen her explore some interesting topics.

Tell us about yourself and how you originally became involved in music?

I come from a family of musicians. My father is a guitarist and my mother has been a singer in both the Philippines and Japan. In fact, there are a number of singers in my mother’s family, and from the time I was a child I was surrounded by music.

Rather than the Philippines, I just began auditioning from scratch in Japan. At first I was involved with a company, but ultimately I elected to work as an independent singer-songwriter.

How does your Philippines-Japan heritage influence your music?

Whereas Japan has four seasons, the Philippines is tropical country that is hot all year round. That heat is reflected in the passion that is evident in music that comes out of the Philippines, and I like to incorporate that into my own music, which tends to be about love, in all of its forms. However, I’ve lived in Japan for a long time and the music I make is heavily influenced by my time in this country.

Still, my songs have elements like riffs and runs that you find with singers from the Philippines, and I think there is that kind of foreign aspect to my music.

Basically, people from the Philippines like music that resonates, and I’m no different, which is why I think I sing a lot of ballads.

You’ve written a song about the Great East Japan Earthquake. Tell us how that came about and what kind of reception it has had?

Like everybody else, I was profoundly moved by the earthquake disaster of 2011. I wrote a song then called “Mata Egao ni Naru You ni” (“To Be Able to Smile Once Again”), which this year I have rearranged and included on my latest album.

After the earthquake, at the urging of some friends, I held a charity concert in May. I felt that one thing I could do at that time was to give people a song, and so I wrote it for that concert. I then made my own CD, with the proceeds from any sales going to charities that were helping in the reconstruction, and I had the opportunity to sing the song at a number of venues.

A lot of families who had lost everything in the tsunami had been relocated to Niigata, where I am based. Many would come to my concerts in Niigata, and I could see that they were moved to tears by the song. They would come up to me after my performance, and tell me that the song gave them the strength to keep going, even after losing everything. To be able to have that kind of impact on people was profoundly moving for me.

Although the song was written in the wake of the 2011 earthquake, the theme is basically “You are not alone.” So I think it is a song that can give people strength at any difficult time in their lives.

Another of your songs touches on the connection between Japanese and Filipino children.

There is an organization in Japan called the Manila Scholarship Association that provides support for the children of Manila. Three years ago, they approached me to write a theme song, called “Ai, Umi wo Koete” (“Love Across the Seas”), which I’ve included on my latest album. My song is about Japanese foster parents who exchange letters over the years with their foster child in the Philippines.

The association helps children in Manila with the cost of schooling, with Japanese acting as foster parents. Every three years the foster parents travel to Manila to meet with the children. I wrote the song after watching a DVD of one of those trips.

I was also born in the Philippines, coming to Japan when I was 3. In my case, I was fortunate enough to be born into a family that was not poor. However, I was well aware of the poverty that affected many of the children of my generation, and so I was grateful to have this opportunity to help support these children.

It was very moving to see the children, their happy faces and their pure hearts.

How tough is the Japanese music industry as an independent singer-songwriter?

Historically, there has been a clear distinction between the major labels and the indies. Recently, though, conditions have been difficult for the entire industry, and a lot more musicians are working independently.

Of course, being associated with a major label doesn’t mean you’ll sell automatically, but given the extensive promotion you do have a lot more opportunities. On the flip side, given how many people are working on your behalf, it does mean a lot more pressure for the artist.

The biggest advantage of being independent is that you can work at your own pace. But it is tough to get your music out to a larger audience; I’ve been working at it now for 10 years. If you are good enough, though, even if you are not associated with a major, you can make it as an indie.

And finally, what’s next for you?

In August, I released “Infinity,” an album marking the tenth anniversary of my debut.

The album is my way of saying thank you to the fans who have supported me, as well as to all the people who have worked with me over the past 10 years.

Next up for me is a series of live performances, which will start in Ginza on September 21. From there I want to continue making music in Japan and overseas, making as many people happy as I possibly can.

Note: Hánna will be performing live at the Café comme ça in Ginza, Tokyo on September 21. See her Twitter feed for more information. 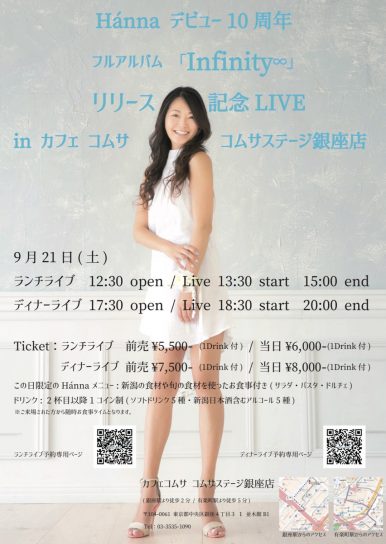 The Revival of Boléro in Vietnam

Ironically, while the North won the war, it is the once-banned yellow music of the South which Vietnamese love.

The thrash metal band is not the first to find itself restricted by Chinese censors.