This past Sunday, Hong Kong protesters brought their message to the streets of Taipei as a group of demonstrators appeared in the city’s popular Ximending shopping district with signs in Chinese reading: “Restore Hong Kong, Revolution in Our Time.”

The demonstrators stood in the plaza outside the Ximen MRT station explaining the situation in Hong Kong, which has developed out of protest against the now-withdrawn Extradition Bill proposed between Hong Kong and China in the spring. Unrest in recent months has devolved into scenes of police brutality and white terror in the city. While another round of protests were unfolding in Hong Kong, protesters in Taipei were demonstrating to appeal to the Taiwanese, explain their demands in response to violent overreach, and express their desire to see a democratic and civil society in their home city.

Over the summer, it has been common to see the occasional demonstration of solidarity with Hong Kong’s protesters. Sunday’s protest was different in a significant way, however: it was led by protesters from Hong Kong. 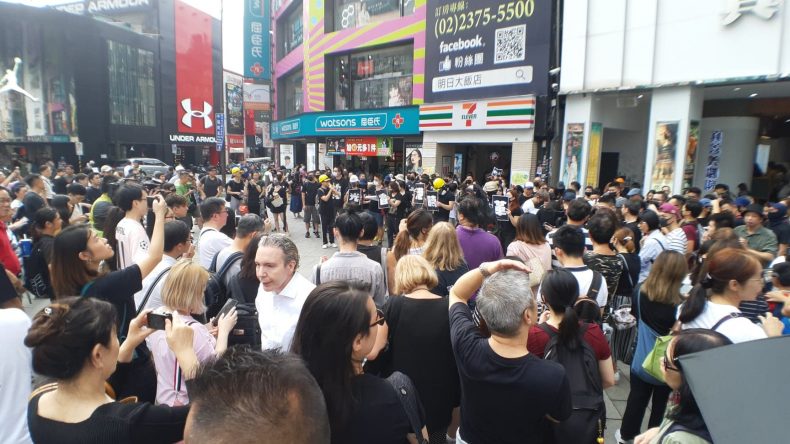 The Hong Kongers were in Taipei for various reasons. Some said they were students. Others were in the city for business. Some traveled specifically for the demonstration, while others indicated they were in self-imposed exile, worried they cannot return to Hong Kong. Many were dressed in black t-shirts, face masks, respirators, and the yellow safety helmets now so strongly linked with imagery coming out of the ongoing civil turmoil gripping Hong Kong.

“This doesn’t look normal. But everyone’s dressed like this in Hong Kong now,” said one of the demonstrators present.

The Hong Kongers were joined by Taiwanese and Westerners for a 30-minute flash mob demonstration which was organized the night before using social media and apps such as Telegram.

From Taiwan, Hong Kong can feel both very near and very distant at the same time. Though only a little more than one hour apart by airplane, their distinct histories have been mixed up in various colonial influences over the past two centuries. Prior to 2014, Taiwan and Hong Kong saw each other more as competitors, being two of the four Asian Tigers of the 1980s. Things changed beginning in the summer of 2014 when both societies experienced a realignment of political consciousness after both experienced massive near-simultaneous grassroots occupation movements against Chinese interference in local affairs.

In Taiwan, the 2014 Sunflower Movement was a massive months-long sit-in occupation of the island’s legislature and central governmental district in opposition to policies widely panned as selling out Taiwan’s economic autonomy to China. Several months later in Hong Kong, the Umbrella Movement developed as a response to perceived Chinese interference in the city’s ability to freely choose its own elected officials and an erosion of its Basic Law “mini Constitution.” In both cases, the masses perceived China’s growing influence over local policy as a threat to their own autonomy. An ideological bridge had been built, one which the Hong Kongers were crossing last weekend. 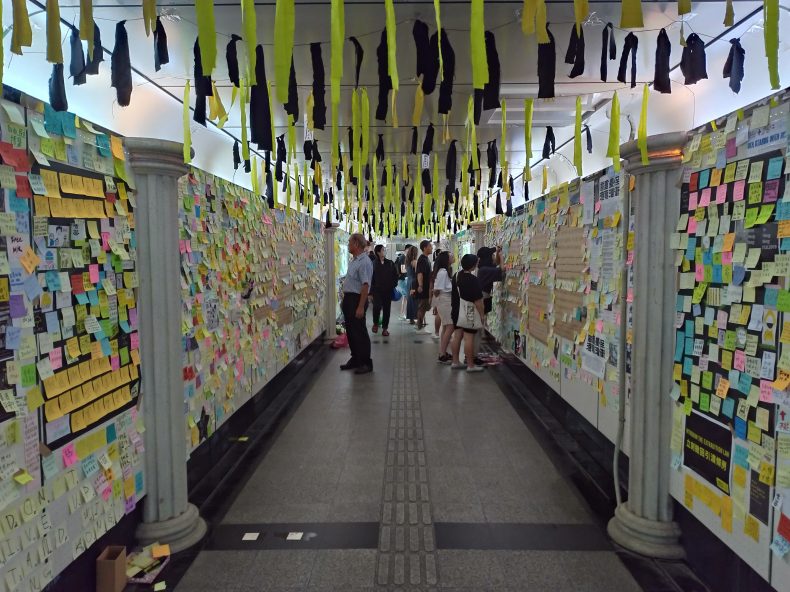 The Lennon Wall in the underground walkway near National Taiwan University in Gongguan, Taipei. Photo by Antonio Bolanos Casanova Jr.

Although there have been several solidarity demonstrations for Hong Kong in Taipei over the summer, the event on Sunday took a different tone as seasoned Hong Kong protesters brought a warning to the Taiwanese.

“If Hong Kong is done, Taiwan is next,” said one Hong Kong protester who has been in exile in Taipei for two months. They fled the city after participating in the occupation of the Legislative Council in early July, and fear being arrested if they return.

They believe the Taiwanese will pay attention.

The flash mob assembled rapidly, with some arriving with bags full of gear. Demonstrators  indicated they organized organically using social media, following the “be like water” protest philosophy of the protesters in Hong Kong, a term adopted from the city’s most famous son, Bruce Lee. Some protesters were more vocal than others, leading the group’s chants, demands, and songs.

One demonstrator laughed, explaining “some are more like water than others.”

Chants of “Free Hong Kong” were joined by “Free China.” Demonstrators sang “Do you hear the people sing?” from Les Miserables, and a new song, “Glory to Hong Kong,” which has become a popular anthem among the protesters. 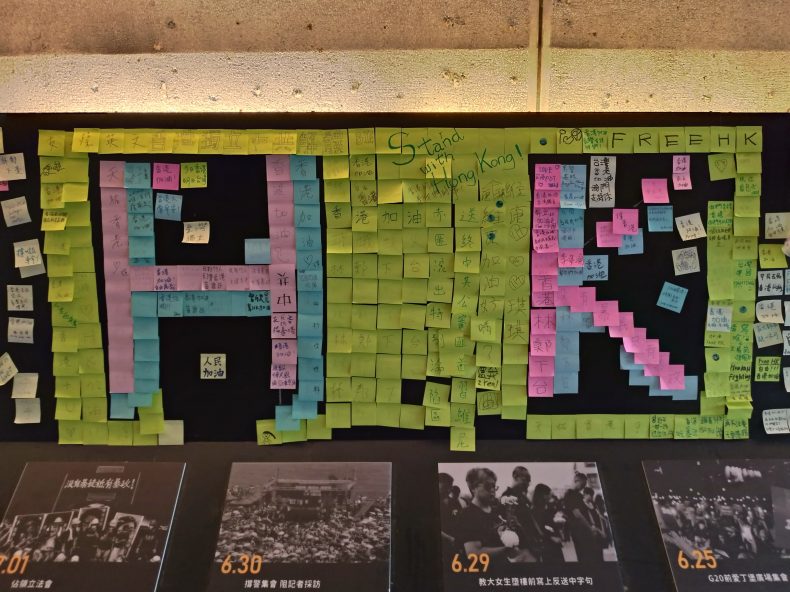 There are many signs the Taiwanese have been paying close attention to developments in Hong Kong. The growth of Lennon Walls in Taiwan since the summer indicates many Taiwanese are receptive to the Hong Kong protesters’ messages. Lennon Walls are displays of support for the protesters on public wall space, often featuring personal messages of encouragement, protest materials, and artwork. One of the largest such walls is in an underground passageway near the entrance to National Taiwan University in Taipei. In Hsinchu City, Mayor Lin Chih-chien signed his city’s wall and the City Council voted to make it a permanent display. Smaller walls have been appearing on university campuses across the island.

Can Taipei expect to see more protests like Sunday’s? It may not be easy, one demonstrator says, due to an “inadequate vision” and not enough Hong Kongers in Taiwan. Some Hong Kongers have indicated there are residency and visa issues to contend with too.

It does appear however, that whether directly or indirectly, the Taiwanese understand the message loud and clear.

Taiwan on Wednesday launched a new office to process applications by Hong Kong nationals seeking to work, study, or seek asylum in the country.

Hong Kong and Taiwan disagree on how to handle the potential return of Chan Tong-kai, wanted for murder in Taiwan.

By Lev Nachman and Brian Hioe

Hong Kongers looking for asylum in Taiwan are hostage to the island’s 2020 presidential politics.

Taiwan officials denounced an attack on Denise Ho in Taipei and said it would deport Chinese nationals who deface Lennon Walls.