Over the last seven decades, the People’s Republic of China has constructed more than 87,000 dams. Collectively they generate 352.26 GW of power, more than the capacities of Brazil, the United States, and Canada combined. On the other hand, these projects have led to the displacement of over 23 million people.

The Tibetan plateau is a rich repository of indispensable freshwater resources that are shared across Asia. After damming most of its rivers, China is now casting its eyes on the major international rivers flowing out from the Tibetan plateau, heralding a new era of damming Tibet’s rivers.

Tibet, known as the “Water Tower of Asia,” serves as the source of 10 major Asian river systems flowing into 10 countries, including many of the most densely populated nations in the world: China, India, Vietnam, Cambodia, Laos, Thailand, Burma, Bangladesh, Nepal, Bhutan, and Pakistan.

China, through its political control over Tibet, has complete upper riparian control over all major rivers flowing out of the Tibetan plateau. Compared to China, Tibet remains a virgin territory with less than 0.6 percent of its hydropower resources being utilized for developmental purposes. But this is changing rapidly. As China seeks to meet its renewable energy targets, Beijing will have to harness yet more hydropower. Chinese hydropower and energy companies have been lobbying the government to allow more hydropower projects to tap into Tibet’s fast-flowing rivers, with as many as 28 proposals awaiting approval.

Tibet is a geologically unstable region with an average elevation of 4,500 meters above sea level (14,800 feet). Despite the critical state of the Tibetan plateau which remains ecologically sensitive and seismically active, China is still moving on with its ambitious plan to expand the hydropower generation on the headwaters of Asia’s major rivers — the Yangtze, Yellow, Brahmaputra, Indus, Mekong, and Salween Rivers.

China’s State Council’s energy plan for the 12th Five-Year Plan (2011-15) and 13th Five-Year Plan (2016-2020) confirm the government’s intentions to vigorously push forward the hydropower project on the Tibetan plateau. Hydropower is being promoted as the centerpiece of China’s plan to expand its renewable energy sector. By 2020, China wants to triple its hydropower capacity to 300 GW. Therefore it is increasingly damming transboundary rivers to achieve its hydropower targets. 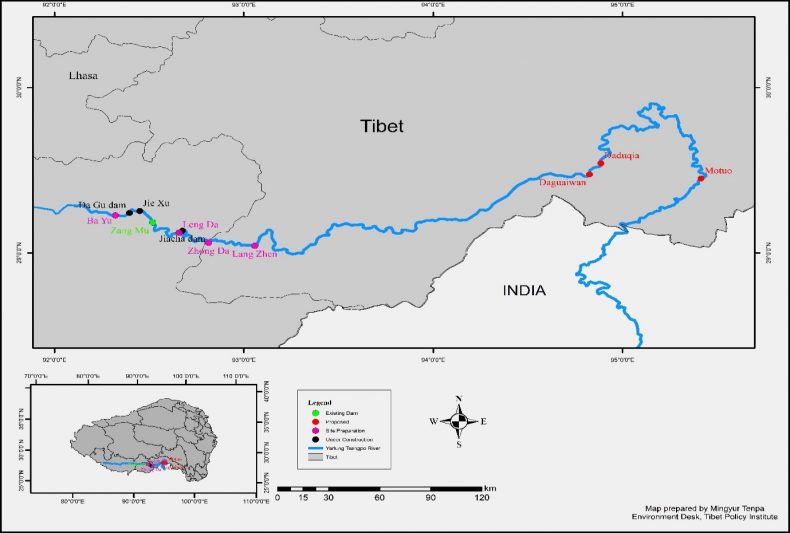 A map showing the Brahmaputra River in Tibet and hydropower dams. Map prepared by the Tibet Policy Institute.

The Brahmaputra, know as the Yarlung Tsangpo in Tibetan, is a major international river shared between Tibet, India, and Bangladesh. It stretches over a total length of 1,800 miles (2,900 km) from west to east, starting on the Tibetan plateau from its source, the Chemayungdung glaciers near the sacred Mount Kailash.

Once a free-flowing river, it is now dammed on every section. Starting from Zangmu hydroelectric power station, there has been a cascade of dams being built on the Brahmaputra.  Geologist Yang Yong had rightly said that the activity represents “the start of a hydropower era for Tibet’s rivers.”

In January 2013, China approved three dam projects on the Brahmaputra River as part of its 12th Five-Year Plan, which triggered concerns in the Indian media about the possible impact on downstream flows. In an attempt to downplay India’s concern over these matters, the Chinese government was quick to assure India that the project will be planned and reasoned scientifically. It maintained that the project was a Run-of-River (ROR) hydroelectricity generation project – meaning a part of the river was being diverted to run past electricity generating turbines, and then the water would flow back to join the river. Such a ROR project would, according to that argument, not reduce the water flow and not have any impact downstream.

These assertions are largely untrue. Instead, ROR projects require storing large volumes of water during the day, only to be released all at once in the evening for generating power during peak energy demand. These daily fluctuations in the river cause an incredible disruption to the river ecology. Moreover, large dams also increase the probabilities of earthquakes, destroy precious environments, and shatter the lives of millions of people who are dependent on the Brahmaputra River.

Rather than benefiting populations with non-polluting power, China’s dam builders are making a Faustian bargain with nature, selling Tibet’s soul in their drive for economic growth. Taken together there is much scientific evidence that dams are not the clean, green, or cheap source of electric power they are often made out to be. 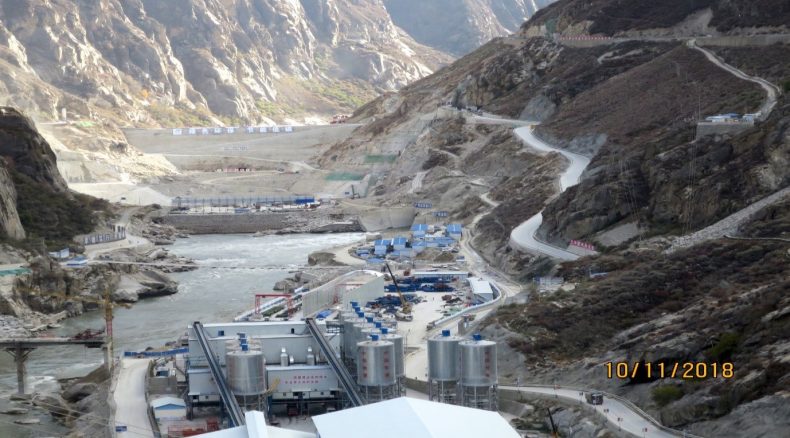 This photo taken on November 10, 2018 shows a construction site of Jiexu Dam. Photo by Dechen Palmo.

It is no surprise that China has begun the construction of three hydropower dams (Dagu, Jiexu, and Jiacha) on the middle reaches of the Brahmaputra. The Dagu (660 MW) and Jiexu (560  MW) dams are being constructed upstream of Zangmu and the Jiacha dam (320 MW) downstream of Zangmu — all located within a few kilometers from each other.

The Zangmu hydropower station (510 MW) is only the start. China plans to build 11 hydropower stations on the Brahmaputra mainstream and several on its tributaries. Huaneng, Huadian, Guodian and Datang — four major power generation groups — have already taken root in Tibet. Among them, Huaneng  is the largest hydropower development in the Tibet Autonomous Region (TAR).

Huaneng Tibet Power Generation Co. Ltd. (HTPG), a subsidiary of the state-owned China Huaneng Group, has signed multiple agreements with the TAR government regarding the development of clean energy in the region. According to the agreements between the company and the regional government, Huaneng’s installed capacity in Tibet will reach 10,000 megawatts by 2020. It is believed that hydropower resources in the TAR account for 29 percent of the national total.

According to the plan, Huaneng Group is responsible for the development of the Jiexu and Jiacha hydropower stations whereas Dagu was constructed by Huadian group.

In addition, the Bayu hydropower station began its survey in November last year. The installed capacity of that power station is 800 MW.

From time to time, whenever water issues such as floods and other disasters occur in the region, India raises its concerns to Chinese counterparts. Those concerns are met with a Memorandum of Understanding (MoU) or Expert Level Mechanism (ELM), which remains nonbinding and without any governing body that ensures their implementation.

China has so far not communicated officially about the construction of these dams on the Brahmaputra. A lack of transparency about dam building on the Tibetan river raises questions about whether the Tibetan people and the downstream countries were fully informed about the risk and impacts on a river system that supports millions. These proposed dams will pose a serious ecological threat not only to the Tibetan plateau but also to the other side of the border. China, by constructing these dams, will be responsible for the overexploitation of the river, which can jeopardize the river ecosystem as well as alter water flows downstream, affecting the farmers and fishermen of India and Bangladesh.

Moreover, China can also easily manipulate the river flow, which puts India at a strategically disadvantageous position. It is high time for India to take a stand in order to ascertain their user rights on the river and monitor those dam activities on the upper part of the Brahmaputra River.

The environmental health of the Tibetan plateau is critical for around 1.3 billion people who live in the river basins downstream in Asia. The Tibetan river shouldn’t be seen only as a source of hydropower; its geological significance should also be taken into serious consideration.

So long as Pakistan lacks the political will to root out terrorism on its western borderlands, international efforts would be in vain.