Abandoned about 1,500 years ago, the Plain of Jars in Laos has become world-renowned. What is less well known, however, is that the valuable sites in the area face a host of threats, from natural disasters such as forest fires, landslides, flooding, and vegetation encroachment, to human-inflicted harm such as theft, vandalism, and irresponsible tourism, not to mention that demining efforts are continuing in some areas.

Despite recognition of the danger, there was not a comprehensive disaster risk management plan to prevent damage and mitigate harm before the beginning of this year. As those efforts are now just underway, the Plain of Jars is an important example of safeguarding World Heritage, particularly in developing countries, based on cooperation between government, international experts, and – crucially – the villagers who have been living in those areas for many generations.

There are still mysteries about the civilization that left behind the Plain of Jars, which consists of more than 2,100 tube-shaped megalithic stone jars used for funeral practices in the Iron Age. The technological skill needed to produce and move them from quarries to funerary sites is considerable. The surviving jars are spread out in groups across sites in a large area. There is also important archaeological evidence related to funerary practices as well as the material culture of the ancient civilization, with the locations of the sites suggestive of cultural meaning.

Among those commitments are to develop and implement strategies for disaster reduction, including capacity-building activities, and to improve the accuracy and detail of mapping of property components. In line with those recommendations, the first Disaster Risk Management Workshop for the site was convened last month, gathering related authorities from the central, provincial, and village levels.

The Disaster Risk Management workshop took place in the context of ongoing hazards threatening the site. “The workshop happened at the right time when there are several hazards on the sites including the recent fire at Site 1 in Phonesavanh – the most visited site,” said Thongbay Phothisane, director-general of the Lao Department of Heritage. “It makes the workshop very relevant in building capacity needed for all related stakeholders.”

UNESCO Bangkok started the first project at the Plain of Jars in 1998 with the objectives to safeguard the site while simultaneously fighting poverty, facilitate the clearance of unexploded ordnance, and encourage tourism to alleviate poverty and achieve sustainable resource management. Those efforts were followed by monitoring of the resilience of the cultural heritage and biodiversity at the sites.

Considering the capacity of Laos, UNESCO Bangkok extended technical support to help to prepare the World Heritage nomination. In 2015, the government approached the organization to assist in reviewing existing information and the outstanding universal value of the megalithic sites.

Crucial to this effort is the involvement of the villagers living around those 11 inscribed sites. International experts and specialists from Laos’ Department of Heritage are working closely with the local villagers, who have been the traditional guardians of the sites isolated on the top of hills.

“I learned a lot from the workshop especially that it is more effective to make prevention [preparations for a] disaster than a disaster recovery,” said Somsak Shawmanysone, a Village Heritage Team member at Na-O village. “Through the exercise, I have also come to be better aware of the values of the Plain of Jars, our own heritage.” 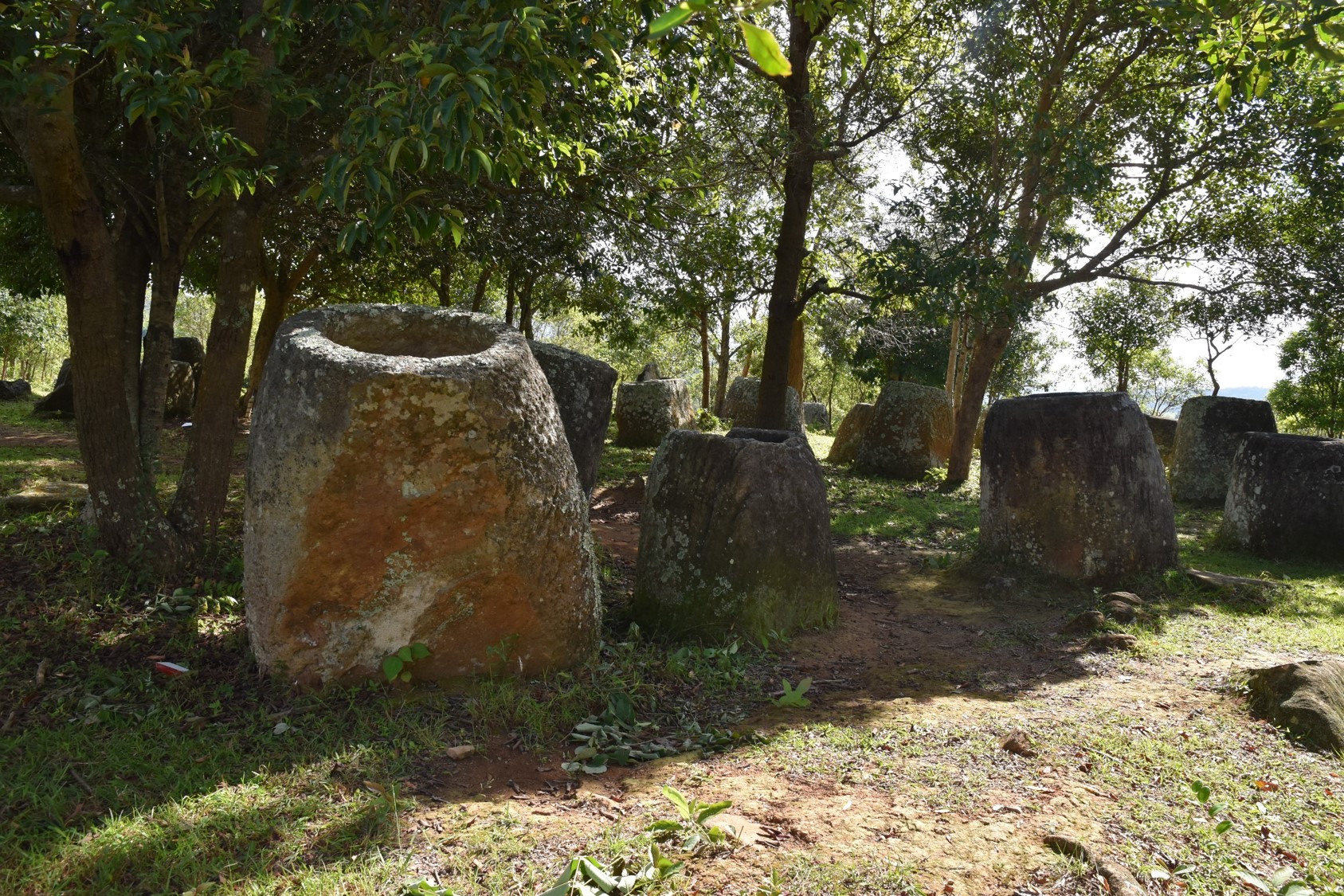 The jars are mostly located on hill slopes across the plateau. The nominated 11 sites are located in four districts: Kham, Pek, Phaxay, and Phoukout. Some are also extremely isolated, thus depending on the vigilance of villagers living close by and monitoring by the Department of Information, Culture, and Tourism at the provincial level.

“We came to clean the jars every month,” Khoun Vilaylieng, a Village Heritage Team member at Phou Xang, known as Site 42. “We remembered all the jars by heart. We do not know much about the risks. All we know is sometimes trees collapse onto the jars because of strong winds.”

Under the project, disaster risk management will be integrated into overall heritage management, including GIS mapping, inventorying, and monitoring. That includes applying a formula to assess the risks and hazards at various sites, the probability of harm, and vulnerabilities.

“The challenge of the international workshop like this in the country like Lao PDR is how you contextualize and simplify it at the community level,” said Dr. Siyanee Hirunsalee, UNESCO project consultant and one of the lead trainers.

Through May, GIS experts, academic staff, and villagers on the ground will conduct risk mapping. Those combined efforts address the limited human resources available to the Plain of Jars World Heritage Management Office, the newly established office managing and monitoring the sites.

“The provincial authorities are very committed to the World Heritage Committee recommendations. The priority right now is to strengthen the Plain of Jars World Heritage office by giving more staffing quotas. We also promised to deliver those recommendations before 2021,” said Buasone Sinouanthong, vice governor of Xieng Khuang province.

The Disaster Risk Management workshop in Xieng Khuang, Laos, was supported by the UNESCO Heritage Emergency Fund, the International Centre for the Study of the Preservation and Restoration of Cultural Property (ICCROM), the Southeast Asian Regional Centre for Archaeology and Fine Arts (SPAFA), and UNESCO Bangkok.

Kamonrat Chayamarit is a program officer with the Culture Unit at UNESCO Bangkok.