As governments in Asia respond to COVID-19 with the enactment of emergency powers, the sight of uniformed military and police in communities across the region is becoming a familiar one. Curfews and lockdowns are now the norm. Hundreds of thousands of security-sector actors are deployed in streets, airports, and communities to implement checkpoints and enforce physical distancing. But the increasingly visible uniformed officers at the frontlines of COVID-19 security response are overwhelmingly male. The proportion of women in the police in Southeast Asia ranges from only 6 percent in Indonesia to 22 percent in Laos, according to a forthcoming publication by UN Women, UNODC and INTERPOL. The effects of this amplified securitization in civilian spaces, led by male military and police, bring many challenges, especially for women and girls.

An increased presence of security personnel can in some contexts heighten the vulnerability of women and girls to sexual and gender-based violence. This is well established in conflict situations. In 2018, national armed forces, police, or other security entities were responsible for incidents of sexual violence in at least six conflict contexts across the globe. There have also been documented surges in gender-based violence by security forces during previous health crises. “We should learn from other epidemics,” says Gaelle Demolis, program specialist for UN Women Regional Office for Asia and the Pacific. “Having worked in West and Central Africa during the Ebola outbreak, we heard instances where members of the security forces perpetrated gender-based violence, such as rape and sexual assault when villages were quarantined. These actions of a few can severely damage trust in the security sector and break down confidence within communities.”

Measures must be taken to prevent such incidents in the implementation of COVID-19 emergency measures. In the Philippines, women have already reported harassment by male military personnel at checkpoints, which can often include a physical temperature check. Law enforcement must make protecting women and children from abuse a top priority.

Another risk to women and girls under the security context of COVID-19 is the potential for sexual exploitation, including “sextorsion,”  where sexual favors are used as a currency for corrupt practices. This can take the form of any official personnel trading goods or services in return for sexual favors, and commonly occurs where power imbalances are acute, such as in situations of quarantine or at checkpoints. According to Transparency International, one in five people in surveyed countries have experienced sextortion when accessing government services or know someone who has. And even without the sexual component, women are more likely to pay bribes for health services than men. These trends are likely to be exacerbated in the context of COVID-19.

Lastly, women in Asia are at a heightened risk of being smuggled or trafficked during the pandemic response. Border closures and restrictions on movement are creating a high demand for the smuggling of goods and people, with women and girls constituting a large share of the latter. For example, the closure of the border between Myanmar and Thailand, a prolific trafficking route, has left many migrants stranded and desperate. At the same time, border officers and customs officials have been tasked with screening for signs of COVID-19 at border crossings, taking attention away from migrant smuggling and trafficking. This may create just the opening transnational criminals need to increase their illegal operations. Care must be taken to ensure that frontline security personnel have the resources – material, mental, and physical – to take on their new COVID-19 response duties while still being able to handle their other responsibilities. 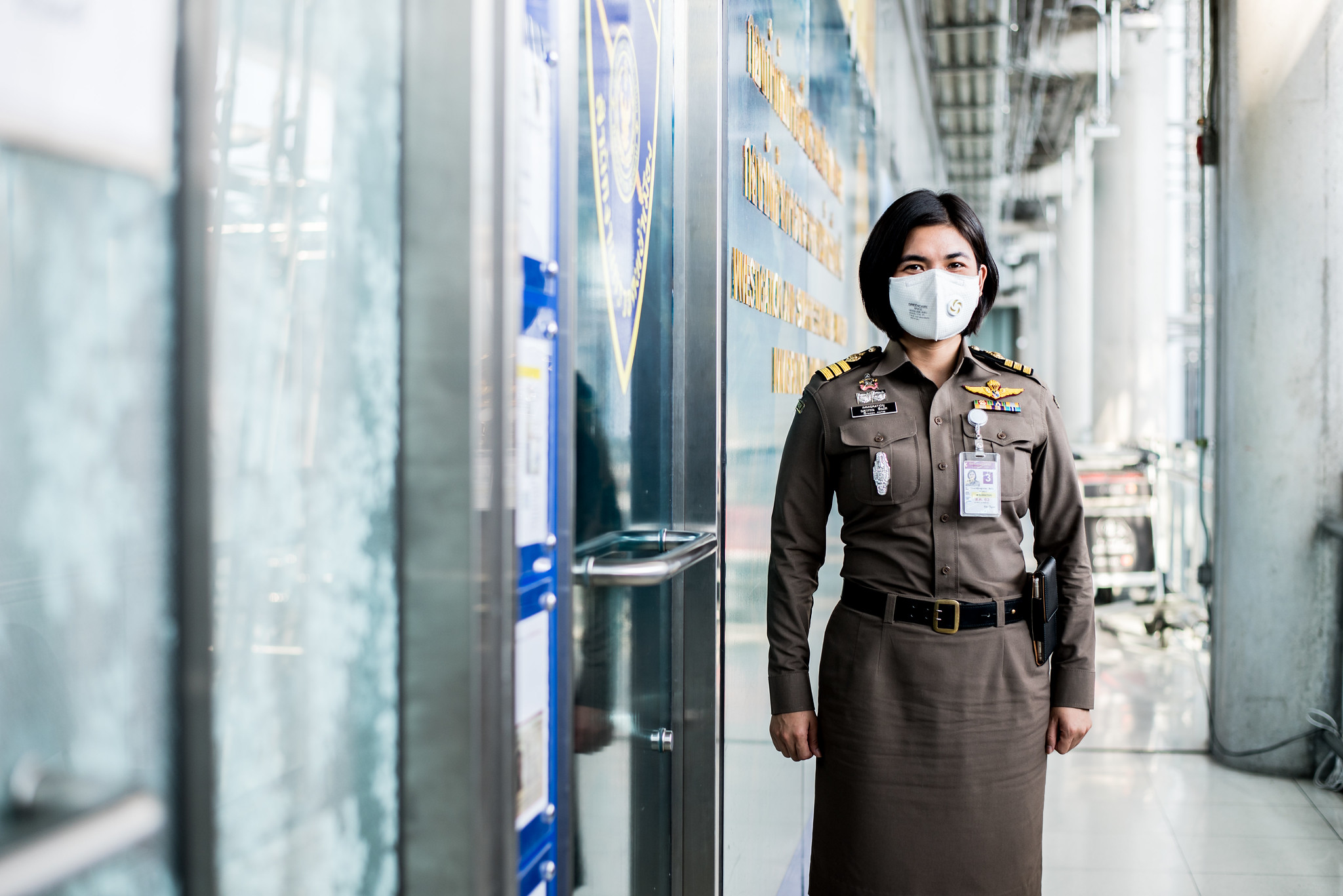 A police captain during the COVID-19 crisis at Suvarnabhumi Airport in Bangkok, Thailand. Photo by UN Women/Ploy Phutpheng.

These challenges taken together present a grim picture for policing the COVID-19 pandemic. Nonetheless, security sector leaders can improve their effectiveness by adopting three key recommendations.

First, officers in charge of enforcing quarantines and emergency measures must guarantee that assistance is delivered with full respect to protect the rights of women and girls. In quarantine settings, personnel have a duty to care for affected women, men, girls, and boys of all ages and diversity, including a responsibility to ensure that all are treated with dignity and respect. The prohibition on sexual exploitation and all forms of abuse by personnel in quarantine settings must be strictly enforced. Avenues for reporting such behavior should be made fully available to all personnel and quarantined individuals. In quarantine and at checkpoints, any physical screening should be performed by personnel of the same sex as those being screened. Furthermore, mixed-sex patrols can help prevent potential sexual harassment or exploitation.

Second, this crisis reminds us how important it is to have women in the security sector. This enhances institutional capacity to respond to the entire population it must protect, including women, girls, men, and boys. For example, women’s participation in peacekeeping missions improves mission effectiveness and advances stability. Women also need to be in high-level security sector meetings on strategy, response, and planning, to represent the needs and issues of their communities. UN Women together with UNODC has already been working across the ASEAN region to advocate for women’s increased participation in law enforcement. The security crisis brought on by the COVID-19 pandemic only increases the urgency of this.

Lastly, security sector officers are at the front lines of the response to COVID-19. We must support them, not only by giving them the strategies and policies to ensure they succeed but also by providing them with assistance such as mental health support, paid sick leave, and childcare.

Taken as a whole, these measures can support our security sector as they support us – to flatten the curve and control the spread of COVID-19. According to one female police officer from Indonesia, “I would like to encourage all women to join law enforcement institutions. People trust police women because we do what we what say!”

Carla Silbert is a writer and development worker from Melbourne. She is also a lawyer, scriptwriter and gender equality advocate. Her work has taken her from New York to Tanzania to her current posting in the Philippines. She’s currently working as regional specialist on women, peace and security for UN Women Asia-Pacific.

The Challenge of Grading Asia on COVID-19

Amid the flood of assessments, we should be mindful of the challenges and limitations inherent in evaluating national performance on the coronavirus.

For Cambodian Women, Equality Starts in the Home

Southeast Asia Must Be Wary of Gendered Cyber Abuse

By Yasmine Wong and Gulizar Haciyakupoglu

Digital abuse has real world consequences for victims – especially as new technologies blur the distinction between virtual spaces and reality.

Marcos Jr. is Steering the Philippines Towards a Foreign Policy Reset

The president-elect has sent clear signals that he doesn’t want to be too dependent on the U.S. – nor wind up too cozy with China.