It’s day one of Yangon’s lockdown.

Hundreds of garment workers sit on crumpled tarpaulins outside factories, trishaws comb the hushed streets for business, and 69-year-old Daw Aye rests on strips of bamboo in her shack.

They are anticipating an affliction more familiar than COVID-19: hunger. But as the city braces for 10 days of solitude during the typically riotous Burmese New Year, the prospect of its poorest starving in self-isolation has galvanized thousands of volunteers.

Daw Aye was worried enough to phone Kyaw Thu Win, 32, a punk rocker well known for his altruistic work with Food Not Bombs. The pair met five years ago near Sule Pagoda, where Daw Aye hawks sticky rice from a metal vat she carries on her head.

That stopped when her supplier closed last month, and, though her neighbors in Thanlyin township gave her support, food was running out.

“It troubles me, seeing so few people on the street,” she said. “It makes me feel lonely.”

Company came in the form of leather-clad volunteers, chains dangling as they filled her hut with cooking oil, dried fish, noodles, and other provisions.

“She is like my grandma,” said Kyaw Thu Win. “I care about this virus, but I care more about people going hungry. Our help is not so big, but it’s better than nothing.”

Yangon region’s 7.3 million people have been told to stay indoors except to buy food and medicine for the next 10 days, as the government deems the next two weeks critical in whether Myanmar sees an explosion of COVID-19 cases — so far it has recorded 27 and three deaths.

The lockdown will hit hard for people eking out a living on the streets who don’t have the option to stock up on supplies in the supermarket.

Starting from today, the government will distribute basic food packages to families without income, although there is no guarantee everyone who needs one will receive it.

Working hard to fill in the gaps are charities such as We Love Yangon, which has gone from helping 1,000 to about 15,000 families a day over the course of a month, said its secretary general Zaw Win Khine, 45.

“During this time a lot of people will face problems,” he said. “We are now giving not only rice and cooking oil but also chicken and vegetables.”

The government has permitted the group’s 300 volunteers to walk through destitute neighborhoods during lockdown, looking for the hungry.

Meanwhile, education center Journeys YGN has devised a way for restaurants and teashops to provide free meals by asking customers to pay a bit extra.

The scheme, called “Sa Pe Be La?” — the standard Myanmar greeting, meaning “have you eaten?” — will appear on posters in restaurant windows and web pages on delivery services.

Unsure of how far authorities will go in enforcing the lockdown, Food Not Bombs rushed to help street workers on Wednesday.

But when Kyaw Thu Win was told of the plight of 1,000 garment workers striking for unpaid leave, that plan expanded to arranging for an extra 25 bags of rice, each just under 50 kilograms.

Myanmar Business Answers donated 300 masks, and the team visited four factories in Dagon Seikkan, bringing along their guitar to rouse the workers with some songs. 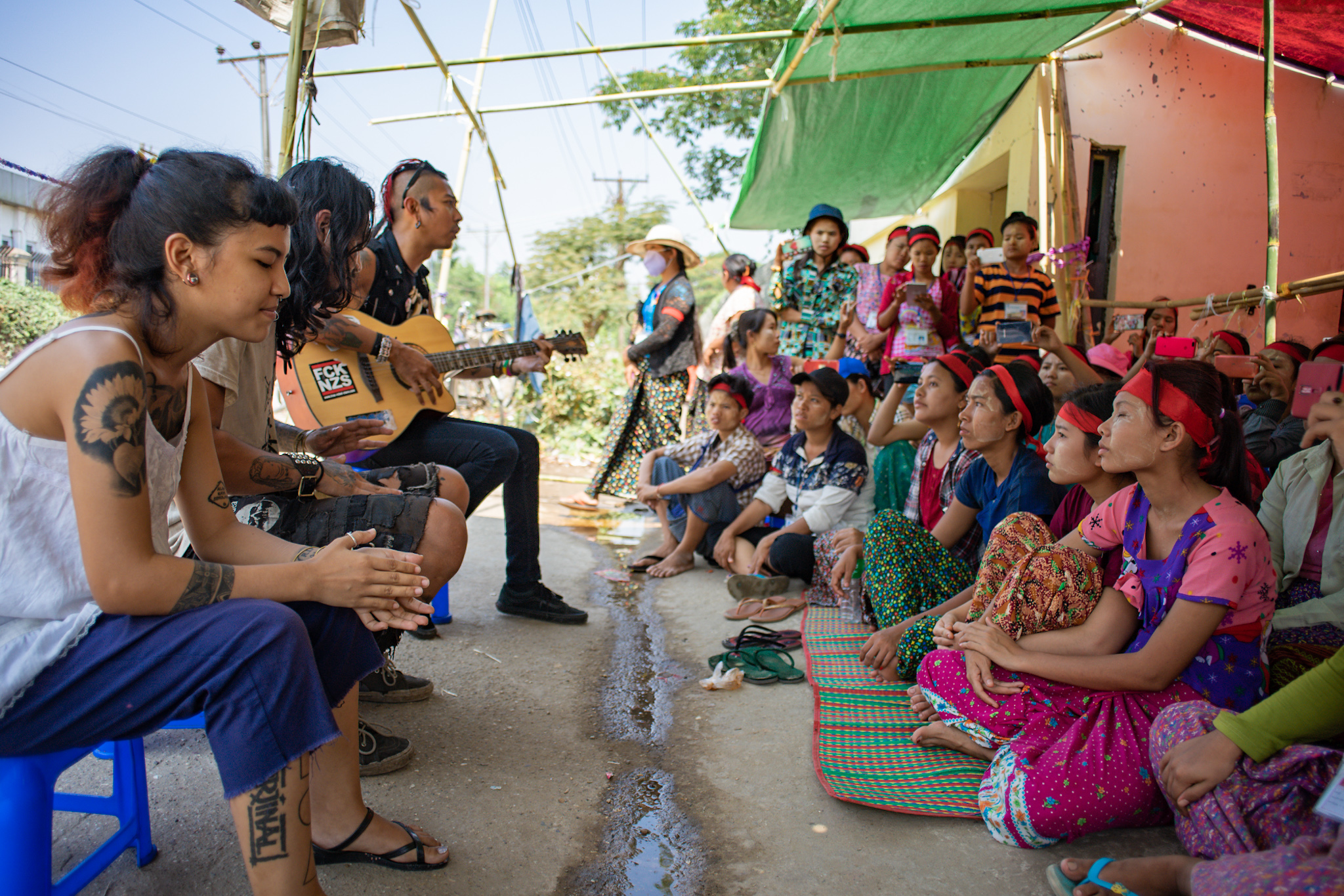 Activists from Food Not Bombs visit with striking workers. Photo by Faeez Safedien.

About 25,000 Myanmar garment workers from more than 40 factories lost their jobs because of the pandemic, according to an EU statement that yesterday announced an emergency 5 million euro ($5.5 million) cash fund for the workers.

When Myanmar confirmed its first cases of COVID-19, the mostly female employees asked the factory owners to close and give paid leave for April — two weeks of which was a public holiday — in order to protect their health and livelihoods.

The owners declined, and so the workers sat outside, day and night, exposed to the scorching sun, the mosquitoes after sunset, and other dangers in the industrial area.

Though wary that being huddled together would help spread the virus, their fears were soon surpassed by the uncertainty of when they could next feed their families and themselves.

“Our only option is to keep negotiating with the owner,” said Zar Zat Htun, 30, the mother of a 2-year-old girl. Zar Zat Htun has protested alongside 200 other women outside purse and handbag factory Blue Diamond World since April 3.

Working at the factory for eight months, she was on a high-tier salary equivalent to $3.4 a day.

“A lot of factories have shut and the owners ran away without giving money to the workers,” she said. “We are also worried about that.”

San Dar Win, 38, relies on her factory earnings for her 6-year-old son, two siblings, and father, who live near Naypyidaw.

“If the pandemic comes here, we don’t have any health facilities to deal with it,” she said.

Nearby, employees of bag factory Brightberg Enterprises Myanmar fear it will never reopen. Adding to the anxiety, a demonstrator went home with a fever on Sunday.

The following day video showed them trying to block a delivery of raw materials on Monday, leading to scuffles with the Chinese management.

They have wrapped red bands around their foreheads “to show how red our blood is with rage,” said the leader of the 150-strong strike, 28-year-old Wa Wa Khine.

Outside glove factory Mayshar Myanmar, workers are using the momentum of the protest for paid leave to demand more labor rights, among them the provision of masks, hand sanitizer, and other health equipment.

“The owners fire people they don’t like without any warning,” said Wai Zin Oo, 26, a labour union leader who was fired on March 31.

None of the factory owners were available for comment.

“The lockdown could go on for longer, and then there would be more jobless, more hunger, and more poverty,” said Wai Yan Phyoe Moe, 21, vice president of the All Burma Federation of Student Unions. “The situation could get much worse.”

Kyaw Thu Win asked what else she needs for the future, but Daw Aye, who is used to working nine hours a day, five days a week, requested something he could not provide.

“I have nothing to do,” she said. “I just want to sell food again.”

Lorcan Lovett is a journalist based in Southeast Asia.

Myanmar is having to weigh competing public health and socioecononmic concerns, all with an eye toward navigating the precarious civil-military balance.

Myanmar has confirmed its first case of the new coronavirus. Can it prevent infections from exploding?

Myanmar's health care system is largely broken amid widespread resistance to the military's February coup. Richardson was in the country to discuss delivery of humanitarian aid.