In the midst of a global pandemic and looming fears of considerable growth deceleration, Narendra Modi’s government took a major decision to ban foreign direct investment (FDI) under the automatic route from countries having land borders with India. The amended FDI policy is aimed at preventing “opportunistic takeovers” of Indian companies amid the COVID-19 pandemic. In particular, analysts worry that, in the post-COVID period, Chinese companies will buy up distressed assets for a throwaway price. The immediate signal for this emerged from the People’s Bank of China’s recent decision to increase its shareholding in Indian bank HDFC from 0.8 percent to 1.0 percent.

The fear of predatory capital from China acquiring strategic stakes in India is not completely unfounded. Over the last few years Chinese companies have invested in two-thirds of Indian start-ups valued at over $1 billion, with significant stakes being bought by companies like Alibaba (in Paytm, Bigbasket, and Zomato) and Tencent (in Ola, Flipkart and BYJU’s). This, along with China’s strategic acquisitions in U.S. and European companies over the years, created panic across the world and resulted in similar barriers being erected by countries like Germany, Italy, Spain, and Australia. India’s move to ban Chinese FDI through the automatic route has unsurprisingly found favor across the political and economic spectrum given these genuine apprehensions as well as China’s manipulative trade practices and strategic backdoor acquisitions in countries around India.

While calls for the protection of Indian companies resonate well with global trends and go down very well with domestic audiences as a populist measure, the move appears to have been rushed. For instance, when we look at the FDI patterns in India, over the last two decades, India received a cumulative $456.91 billion in FDI, with over 72 percent of it coming from just five countries – Mauritius, a preferred channel for foreign investors from around the globe (31 percent), Singapore (20.7 percent), Japan (7.2 percent), the Netherlands (6.7 percent), and the United States (6.2  percent). The proportion of China’s FDI in India during the same period constituted a mere $2.34 billion (0.51 percent) of total inflows. According to the Ministry of Commerce and Industry, the majority of this inflow from China happened over the last five years ($1.81 billion), with the automobile ($876.73 million), electrical equipment ($152.5 million) and services sectors ($127 million) receiving the largest share. Though the rate of China’s FDI exposure to India has been increasing over the last few years, the proportion is still negligible, making it hard to explain such selective targeting.

Over the years, different governments in India have welcomed investments from China, including those with genuine reservations like Huawei in 5G. This is due to the fact that India has a huge trade deficit with China that runs over $55 billion; governments have always tried to bridge that gap partly through investments. The blanket FDI ban (the press note does not specify whether greenfield investments are exempted) will have severe consequences for sectors like automobiles, construction, and real estate and other service sectors, which are already stressed due to decelerating demand, tepid lending, and India’s inherent weakness in capital formation.

Foreign investment in India has proved to be a game changer in many sectors like automobiles, pharmaceuticals, aviation, real estate, and fintech, providing employment, transmitting technology, and adding value to the economy. Moreover, China’s exposure through various investment channels is not alien to India. According to data from China Global Investment Tracker (CGIT), which tracks investments worth $100 million or more, from March 2007 to December 2019 Chinese companies invested $14.5 billion in India (excluding construction contracts), spread over 43 deals, 23 of which are greenfield investments. The majority of these investments are in energy, technology (telecoms), consumer goods, metals, and real estate. 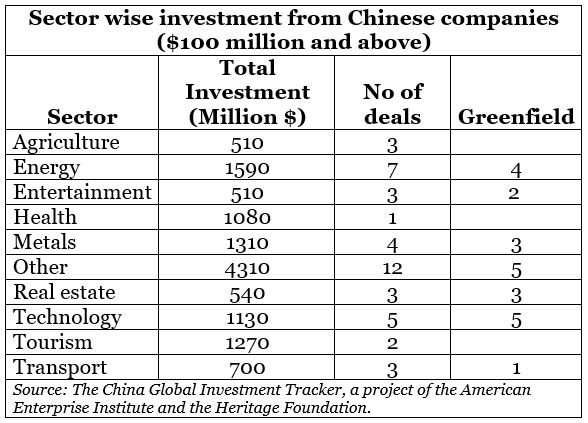 In the last three years, Chinese companies have invested $2.8 billion (2017), $3.3 billion (2018), and $3.4 billion (2019) in India, a majority of them being greenfield. It is common knowledge that FDI is a long-term investment, and the benefits of greenfield investments to the host country have been well documented across the world. 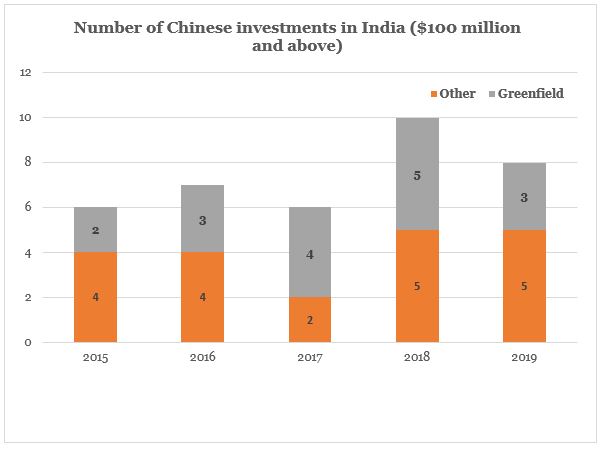 The more problematic part of India’s recent restriction is that it amounts to a blanket ban. There are no exemptions for any type of investors from China. While the press note issued by the Department for Promotion of Industry and Internal Trade says that the government will make the call on investment decisions, the past record does not inspire any confidence. The net effect is that there will be fewer potential buyers, depressing the value of Indian firms that need immediate capital infusions — not to mention the creation of unnecessary red tape.

At a time when Indian corporates are reeling under a severe liquidity crunch due to rising nonperforming assets and banks are not too keen to lend, banning Chinese investments doesn’t augur well. The logic that this move protects Indian companies from takeover doesn’t have a strong basis either. This is because, in spite of foreign investment, operating control of firms still rests with Indian promoters. Moreover, foreign-invested companies still have to adhere to the law of the land while running their day-to-day operations. A quick look at the ownership pattern of NIFTY 100 firms shows that one-fourth of the companies have foreign ownership of 10 percent or above, majorly through foreign corporate bodies. Data from CGIT shows that out of the 43 investments by Chinese companies during 2007-2019, only 15 involved investment stakes of 50 percent and above. Whenever the investment was 100 percent, it was in a greenfield project.

The need of the hour for Indian economy, which is reeling under the twin shocks of crippled growth and the COVID-induced shutdown, is to refuel consumer demand by generating adequate employment. This can only be possible through a capital infusion in the private sector. At a time when the finances of the government are stressed and bank lending is muted, the selective prohibition of foreign capital is not desirable.

It is true that China’s state capitalism, with its assorted hidden subsidies for state-owned companies, does not create ideal conditions for Indian corporates to compete with it. However, the major threat for Indian companies is not from Chinese investment but from Chinese exports. Notwithstanding the current FDI curb, China continues to flood Indian markets from plastics to electronics, even as Indian pharmaceuticals continue to depend heavily on chemicals supplied by Chinese companies. This was evident in the $92 billion trade between two countries in 2019, with India running a $56 billion trade deficit.

Attracting investment is a good way to bridge that gap and this is an excellent time to do so; facing global hostility, Chinese capital is looking for a large market like India. Further, given the reach of Chinese corporations across the globe, Chinese venture capital will still find ways to invest in India through various routes, while at the same time they continue to buy equity stakes in the Indian stock market. In short, India should play the game smartly. As a known financial analyst wisely observed, “massive foreign investment is a bigger risk for the foreigner than the investee country. So, let us attract as much Chinese investment as possible, since the main risk will be theirs, not ours.”

Finally, India’s restrictive policy will not only prompt China to seek redress from the World Trade Organization; Beijing may also take retaliatory measures, prompting a trade war. At this stage of India’s economic development and evolving economic dynamics due to the COVID-19 pandemic, the country can hardly afford it.  Prime Minister Narendra Modi has set ambitious plans for India to use the crisis and emerge as key player in global manufacturing and supply chains post-COVID. Such a vision requires huge capital and forward-looking ideas.  And sticking to the last vestiges of protectionism will not help.

Steven Raj Padakandla is an Assistant Professor in Economics at the Institute of Management Technology, Hyderabad.

Yes, the policy targets China – but there is no legal case against doing so.

In Trade, China Has a Sharp Edge Over India, and Sharp Things Can Be Weaponized

It is not an Indian boycott of Chinese goods that would be a real challenge for New Delhi, but Beijing’s blocking of exports to India.

By Krutika Pathi and Ashok Sharma

The IPO for Life Insurance Corp. is expected to raise up to $2.74 billion.