“A woman tested positive for COVID-19 in the street next to mine and now they have locked down my street and I can only leave my street for one hour to get out to get food or medicine,” my Vietnamese friend Theo Khanh, an architect in Da Nang, tells me over the phone.

Da Nang, a coastal city in Vietnam, has become the epicenter for a deadly new strain of COVID-19 that is being described as three times more contagious, with many of the new cases coming from the popular tourist hotspot. So far there have been 713 coronavirus cases nationwide and eight fatalities have been recorded as of Wednesday, August 5. Coronavirus cases are being detected in other major cities in Vietnam as well. Social distancing orders for 15 days began a week ago in Da Nang and currently only pharmacies, hospitals, ATMs, and supermarkets are open. Once again, Da Nang’s already fragile livelihood has been upended and the city’s streets and beaches are now mostly deserted.

After no new local infections for 99 days, one local tested positive for the virus on July 25 and now many of the new cases have been linked to three hospitals in Da Nang. The Health Ministry released a statement that up to 80,000 visitors to Da Nang since July 1 have now had to return to other parts of the country. In other concerning news, it is now being reported that the virus has spread to at least four factories in Da Nang, which have a combined total of 3,700 workers. 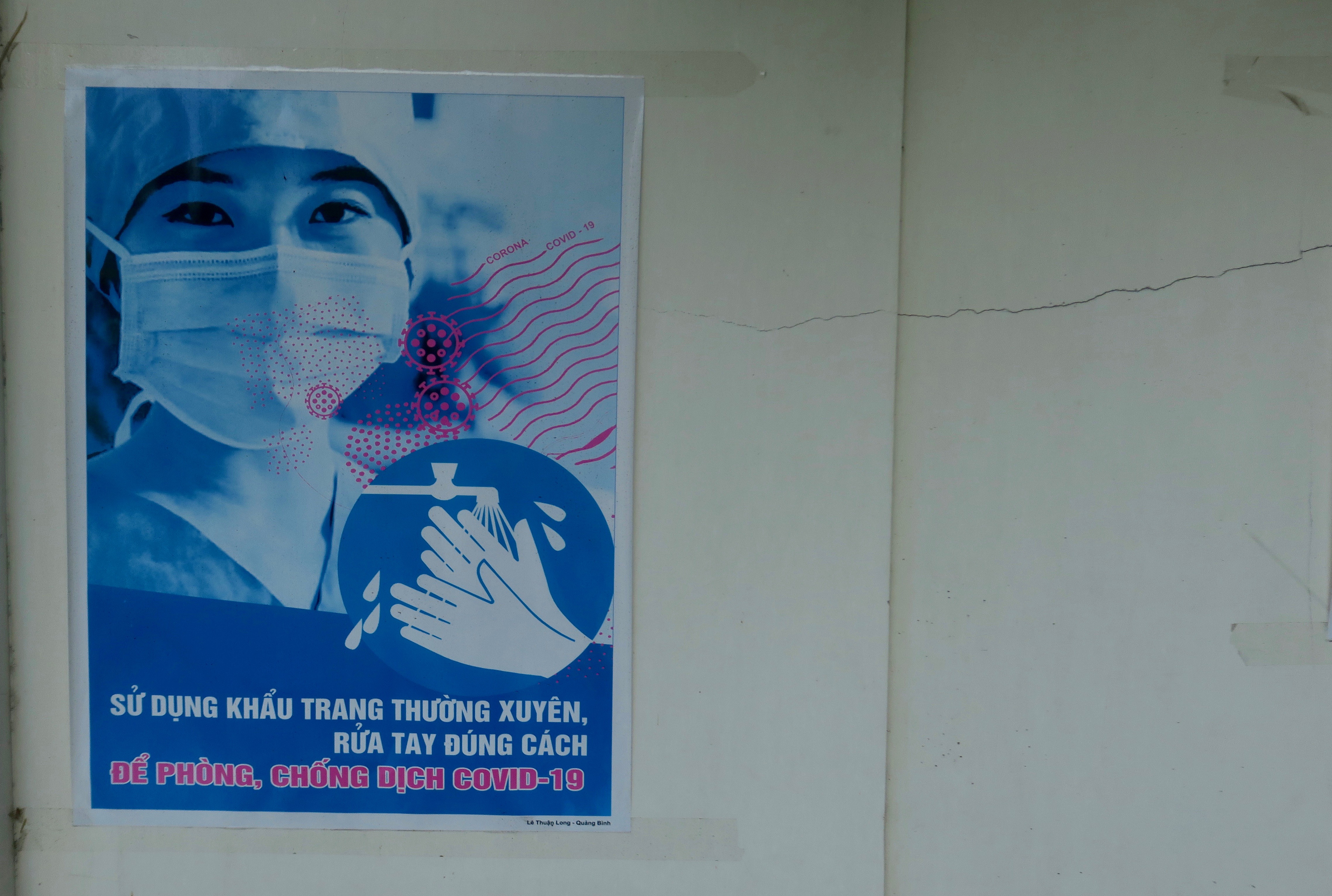 A COVID-19 poster reminding people to wash their hands in Da Nang. Photo by Hugh Bohane.

On July 27, Minister of Health Nguyen Thanh Long said that based on infected patients’ results, there is a new strain of the virus. It is still unclear as to how this outbreak began in Da Nang and any links have yet to be officially confirmed. International borders have been closed since March apart from a few special flights mainly repatriating Vietnamese from abroad. This is one possible cause for the outbreak. There have also been cases of illegal border crossings, including 40 Chinese nationals who were illegally smuggled into Vietnam back in April. Two Vietnamese citizens were arrested last Thursday for organizing the illegal entry and are currently under criminal investigation.

The local authorities now have a plan to test the entire population of Da Nang, approximately 1.1 million people, for the novel coronavirus. As of August 4, local medical workers had already conducted 8,247 coronavirus tests since July 25 in the city. It has been reported that testing will increase up to 10,000 per day, according to the government.

A makeshift field hospital is currently being constructed inside Tien Son Sports Center in Da Nang’s Hai Chau District and is due to open next week. Up to 100 security guards, engineers, and construction workers are currently working long hours to meet next week’s opening deadline.

The sports center will be able to hold up to 2,000 patients if needed and will take some of the pressure off Da Nang’s hospitals, which are in lockdown. 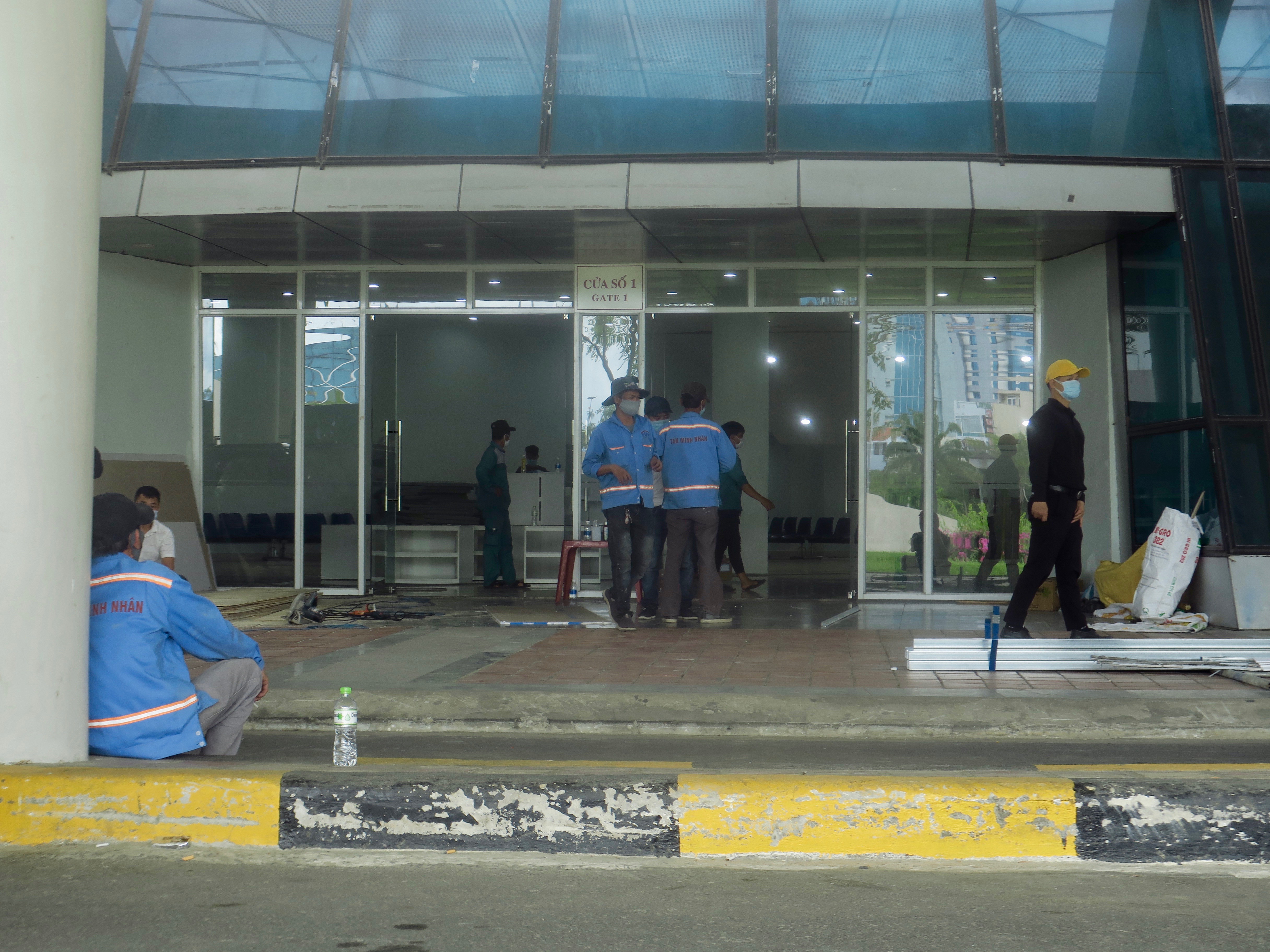 Workers at the entrance to the makeshift field hospital inside Tien Son Sports Center Da Nang. Photo by Hugh Bohane.

The Diplomat spoke with two expats living in and around one of the Da Nang hot spots, who said they have had to take mandatory blood tests. If anyone refuses they will be sent into quarantine. The blood testing is part of the government’s aggressive action plan to test the population quickly. The blood tests can reveal whether a person has had the virus in the past or has it now more quickly than typical swab tests can.

In a well-known expat area of Da Nang called Ngu Hanh Son, close to My Khe beach, one street experienced a much stricter lockdown a couple of days ago due to at least one case being detected there. The street, An Thuong 15, was barricaded at both ends and security guards and medical workers in hazmat suits swooped into the area. A few other streets have been barricaded off around the city where suspected cases have also been discovered. The Diplomat spoke to an expat couple, Mike Coombe and Aarin McMasters, living together on An Thuong 15 to get their reactions to the recent lock in. 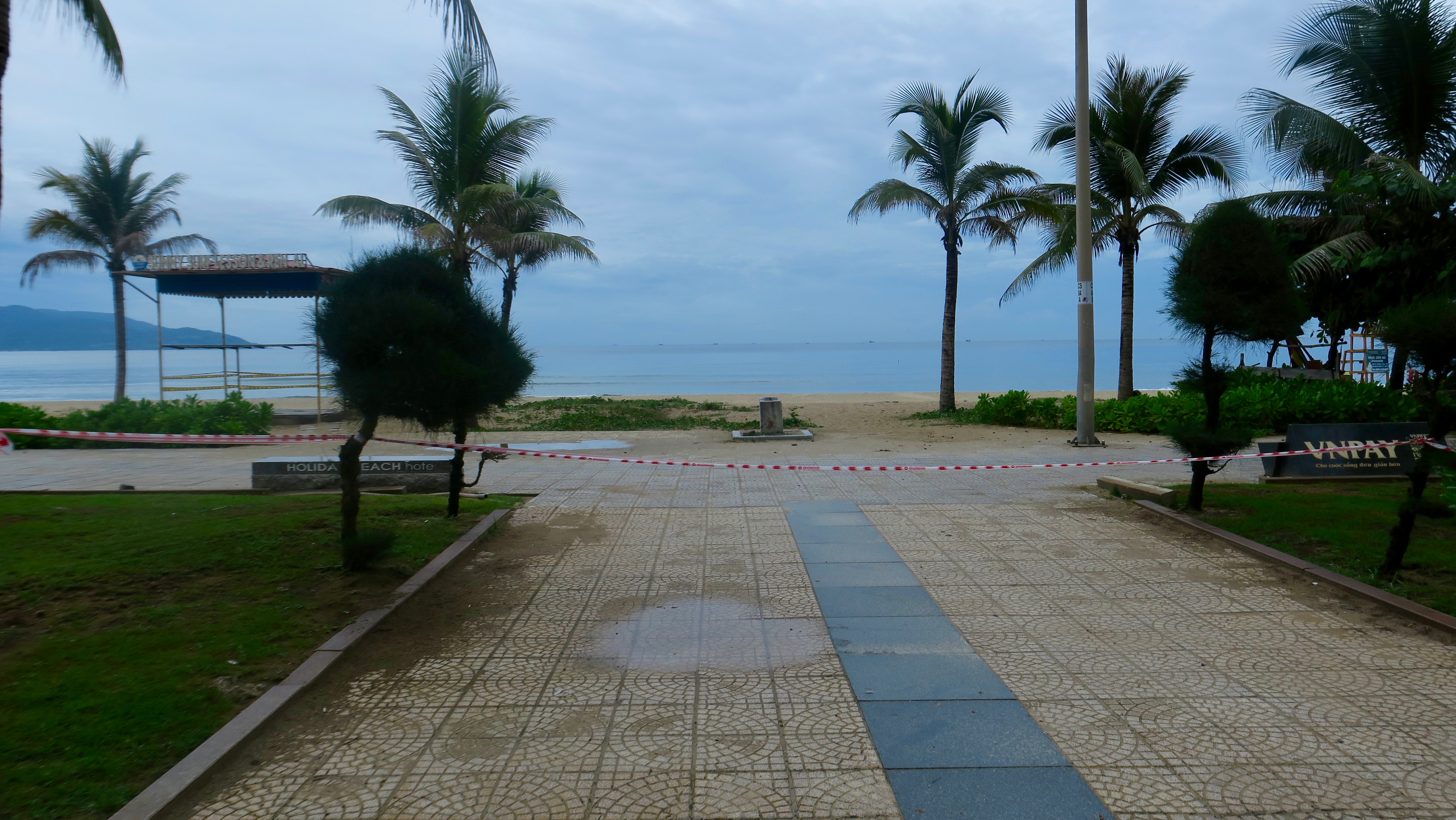 My Khe beach shuts down. Photo by Hugh Bohane.

“Lockdown has been crazy for us now as we have so many new cases in Da Nang which wasn’t the case in the first lockdown,” said Coombe.

Coombe is from England and started an online marketing business back in 2017. He moved to Da Nang in February this year in order to be close to the beach.

Due to the restrictions on An Thuong 15, people there have not been able to get food delivered directly to their door and all restaurants are closed. Coombe went for a walk in the early morning on July 30 to get some exercise and withdraw money from an ATM. Within just a few hours numerous guards had set up barricades on both sides of the street and had begun spraying disinfectant.

Coombe’s landlord later explained that a lady living on his street had contracted coronavirus five days before being admitted to the hospital. The street is now guarded 24 hours a day and residents have been told not to leave the street for at least 15 days. The barricades have since been extended into neighboring streets. Fortunately, friends have been delivering food and water to Coombe and McMasters from a distance, dropping off outside their barricaded street.

“Yesterday our landlady messaged us saying we need to come down for a test which she has been doing for the past few days, a regular temp check like usual. However it turned out that we all had to have blood taken to test for antibodies,” sad Coombe. 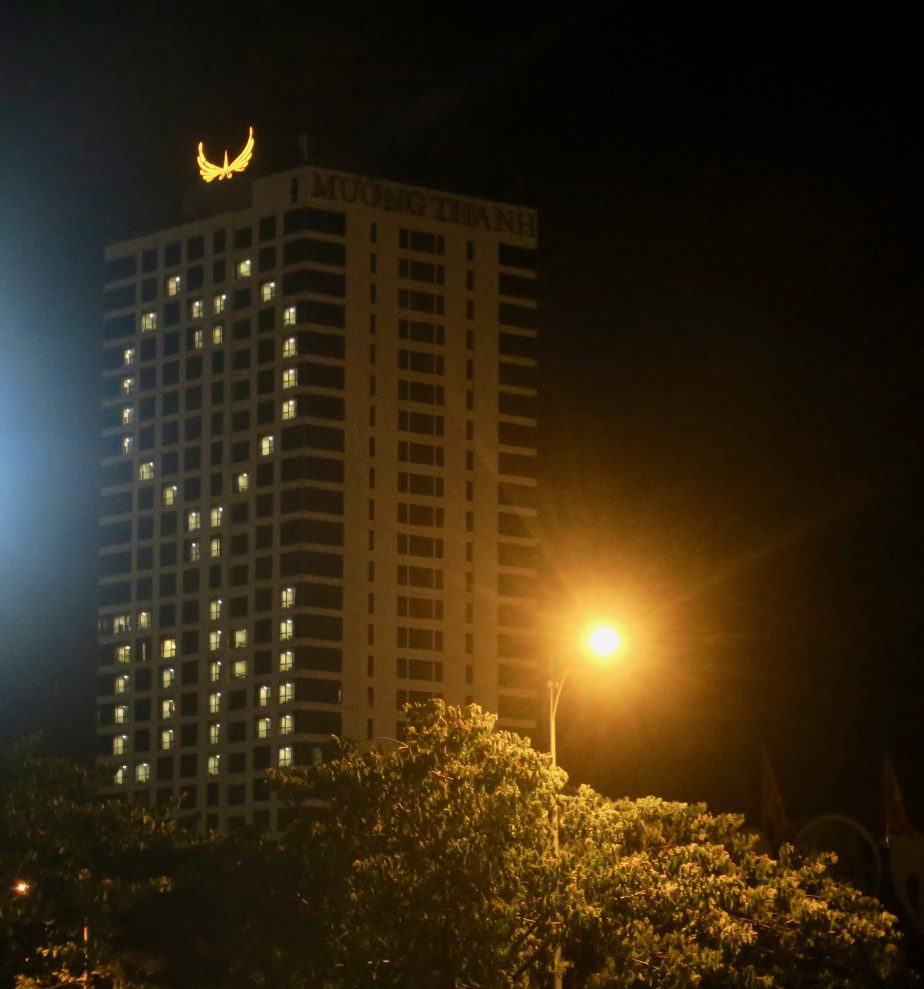 Windows light up with a message of solidarity in Muong Thanh Hotel in Da Nang. Photo by Hugh Bohane.

The landlady explained that the test was mandatory and that if anyone refused they would be taken straight to quarantine. Coombe and his girlfriend McMasters are now waiting anxiously for their test results. He said that even if they test negative there is still a chance they may have to quarantine. The building might be cordoned off if someone in their building tests positive.

McMasters is an English teacher who moved to Vietnam in January.

“I’m really happy with the way Vietnam has dealt with the situation and [is] also allowing tourists visa extensions when needed,” said McMasters.

My local friend Theo, like many of my Vietnamese friends in Da Nang whom I have spoken to in recent days, have all responded to this new development with an attitude of “We’ve got this, we have done it before.”

“I’m not really worried because I don’t have any symptoms and I am following the rules, wearing a mask, washing my hands, and I am cooking for myself and reading every day,” said Theo.

Like many people I have spoken to, he said he was also happy that the government is handling the situation logically. Even if some people think it may seem like an overly aggressive approach, he sees the importance of going into a strict lockdown.

“I was prepared that the situation could escalate at some stage and so I am not that shocked, to be honest,” he said.

The events of last week in Da Nang and across Vietnam have left the country searching for answers as to how this second outbreak happened. Did Vietnam let its guard down? Up until now, the country has been praised for keeping COVID-19 cases low, especially in comparison to many other countries. Until this new strain emerged, Vietnam had even avoided any COVID-19 deaths. Nevertheless, Vietnam’s aggressive response to fighting the virus has proved successful in the past. Time will tell if it will be able to contain this latest outbreak or whether the country is too over-stretched and under-resourced to handle it.

Hugh Bohane is a freelance journalist who has covered Asia for over 10 years. He has contributed to The Diplomat, ABC, Euronews, The New Internationalist, and other esteemed press.

In Vietnam, an Ancient Town Struggles With a New COVID-19 Outbreak

Even before the outbreak in Da Nang, Hoi An’s people were devastated by the loss of tourists. Now the slight hope of economic recovery has been dashed.

After 99 Days of Success, Virus Returns to Haunt Vietnam

The outbreak began last Thursday in Da Nang and the authorities haven’t figured out yet exactly how the virus crept back into the country.

According to the Indonesian leader, Vladimir Putin has promised to open a sea route to allow exports of food and fertilizer from Ukraine.