President Donald Trump has authorized a formal transition process to President-elect Joe Biden. As Biden unveils Cabinet appointees (including Antony Blinken as secretary of state) and formulates his foreign policy, it is crucial that he addresses the confidence deficit among Hong Kong Americans regarding the U.S. stance on Hong Kong.

Our survey of Hong Kong Americans shows that they are united in their desire for a strong U.S. policy to curb Beijing’s repression of Hong Kong. Their key concern is which presidential candidate and which party would be more effective. In that regard, it is notable that even Biden voters expressed doubt about his Hong Kong policy. The survey reveals that 33 percent of Trump supporters in 2020 voted for Clinton in 2016, and that some voters preferred Trump for president but Democratic candidates for Congress this time.

The rising profile of Hong Kong’s struggle for freedom on the international stage and the 2020 U.S. elections presented a perfect opportunity to examine the political attitudes of Hong Kong Americans: Hong Kongers who have lived, worked, or studied in the United States, and Americans who have similar strong ties to Hong Kong. We are particularly interested in whether and how political engagement with Hong Kong politics shapes voting behavior in American elections.

Given the lack of a national census of Hong Kong Americans, our sample was not meant to be representative. We reached out to our target population through Facebook groups of Hong Kong Americans, Hong Kong clubs across various U.S. higher education institutions, listservs of China experts, and requested further circulation of the survey. Between October 15 and November 2, we received 890 valid responses. Our survey sample included 611 US citizens (69 perrcent), of which 595 were registered to vote, while 275 respondents (31 percent) were green card and visa holders ineligible to vote. The majority reported having lived in the U.S. and resided in Hong Kong for more than 10 years (70 percent and 87 percent, respectively).

Respondents to this survey are united in their burning concerns for Hong Kong. They passionately back the 2014 Umbrella Movement and the 2019 anti-extradition protests, while intensely opposing the Beijing-imposed national security law. However, they became deeply divided over the U.S. elections and sorted themselves into either the Trump or Biden camp. At the same time, the majority acknowledged the critical importance of bipartisan support for the Hong Kong cause.

Key Finding 1: Respondents are staunch supporters of the pro-democracy movement in Hong Kong. 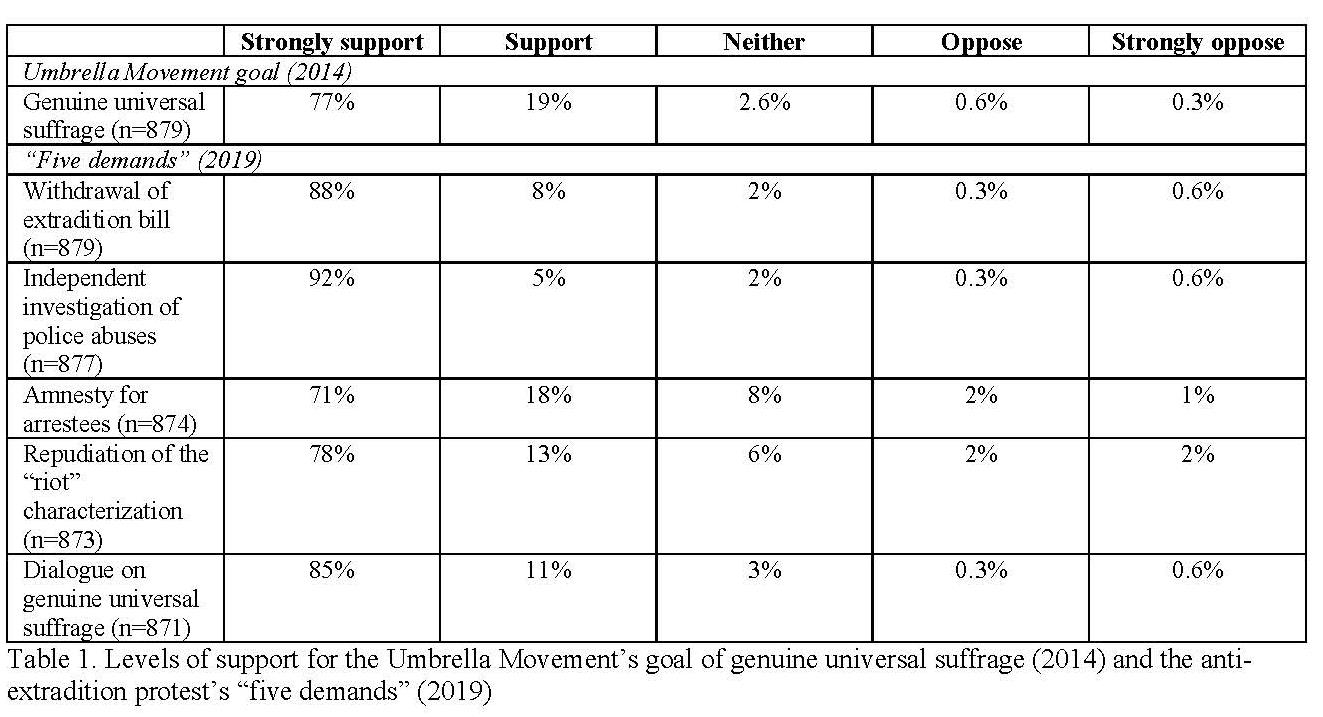 Similarly, 826 respondents (95 percent) expressed their opposition to the Beijing-imposed national security law, which critics argue has effectively ended the promise of “one country, two systems.”

Among 595 registered voters, 325 (55 percent) supported Trump while 205 (34 percent) preferred Biden. Interestingly, almost half of the Clinton voters in 2016 switched to Trump in 2020. Figure 1 shows the pattern of vote change between the 2016 and 2020 presidential elections. Trump managed to draw support from not only Democrats but also those who did not vote or voted for the third candidate in 2016. 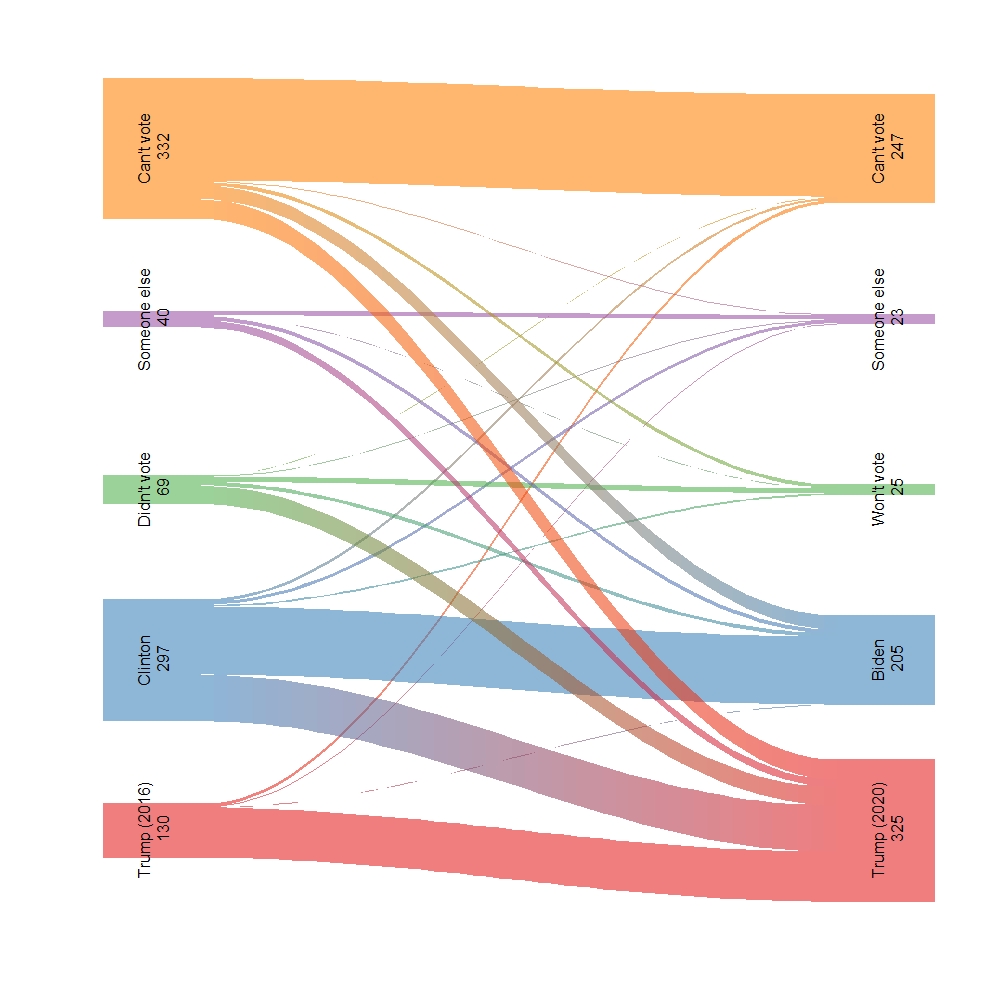 The survey also reveals a higher level of split-ticket voting among Trump voters: 50 (15 percent) of those who supported Trump in the presidential election indicated that they opted for Democratic candidates in their congressional district. (See figure 2.) 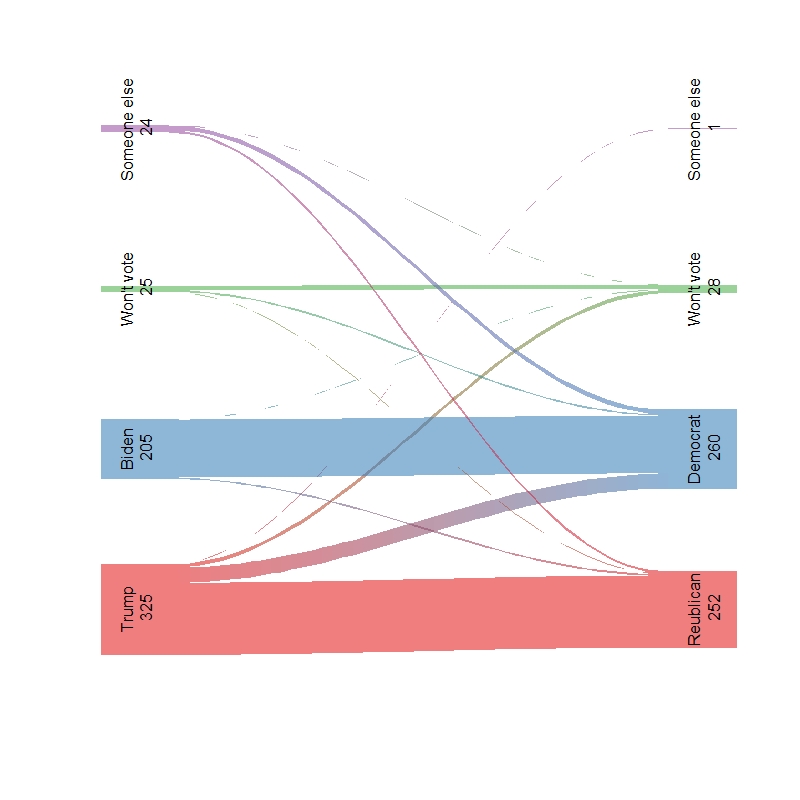 Figure 2: Split-ticket voting in Presidential and Congressional elections in 2020.

Respondents were asked to rate the Republican Party, the Democratic Party and leaders from both parties using the feeling thermometer, with 0 indicating extremely unfavorable, 50 neither favorable nor unfavorable, and 100 extremely favorable. The responses demonstrated a large partisan divide between Trump and Biden supporters.

Figure 3 shows the average ratings on the two parties and prominent political figures by voter groups (Trump voters, Biden voters, and non-voters). The average gap between Trump and Biden supporters is 51 points, with Trump being the most polarizing figure with a 74-point difference. In general, Trump voters expressed much warmth toward Trump, Senator Marco Rubio, and Senate Speaker Mitch McConnell, and much coldness toward Democrats including Biden, former President Barack Obama, and House Speaker Nancy Pelosi. Likewise, Biden voters were very warm toward Democrats and cold toward Republicans.

The 275 non-voters (31 percent of respondents), however, did not present any partisan sorting effect and maintained the middle ground across all relevant questions. 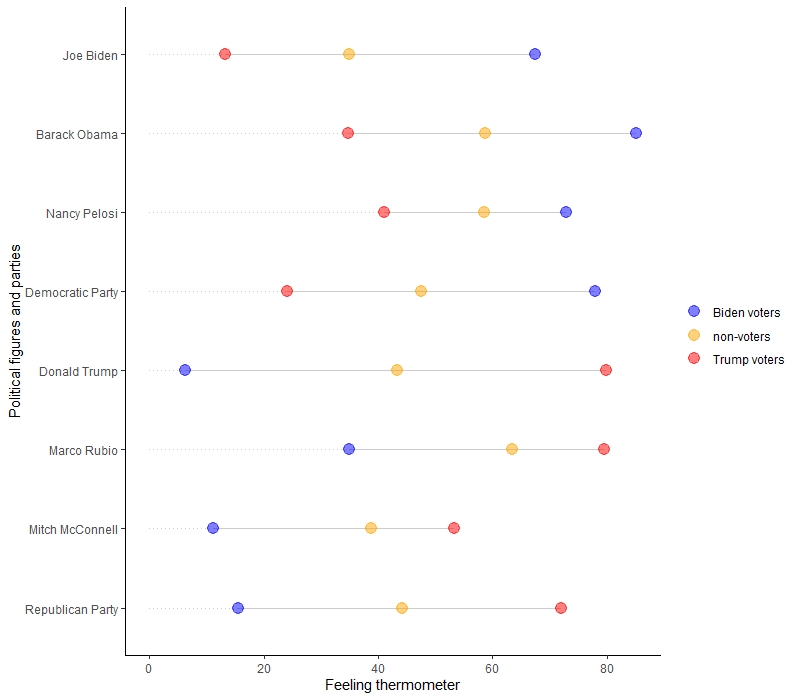 Key Finding 3: Consensus on a strong U.S. policy toward China and on bipartisan efforts to protect Hong Kong

Despite polarizing views, respondents presented a near consensus that the United States should pursue a tough China policy. On average, 95 percent of Trump supporters, 78 percent of Biden supporters, and 88 percent of non-voters found it “extremely important” and “very important” for the U.S. to actively limit Beijing’s power, promote human rights, and defend Taiwan even when other priorities are at risk.

It is noteworthy that Biden voters were less certain of their candidate and party. While 62 percent of Biden supporters disagreed that another Trump term would be good for Hong Kong, they had moderate confidence in the Republican Party: 25 percent agreed that the Republican Party would be effective in safeguarding Hong Kong, compared to 29 percent for Biden and 34 percent for his Party. Biden voters even had much doubt about both Biden and the Democratic Party: about half chose “neither agree/disagree” regarding the effectiveness of a Biden administration (50.5 percent) and the Democratic Party (46.5 percent).

Non-voters shared a similar pattern. About 46 percent believed in the effectiveness of a Trump presidency and the Republican Party. Only 7 percent were confident in the Biden administration and 15 percent in the Democratic Party. (See Tables 2-5.) 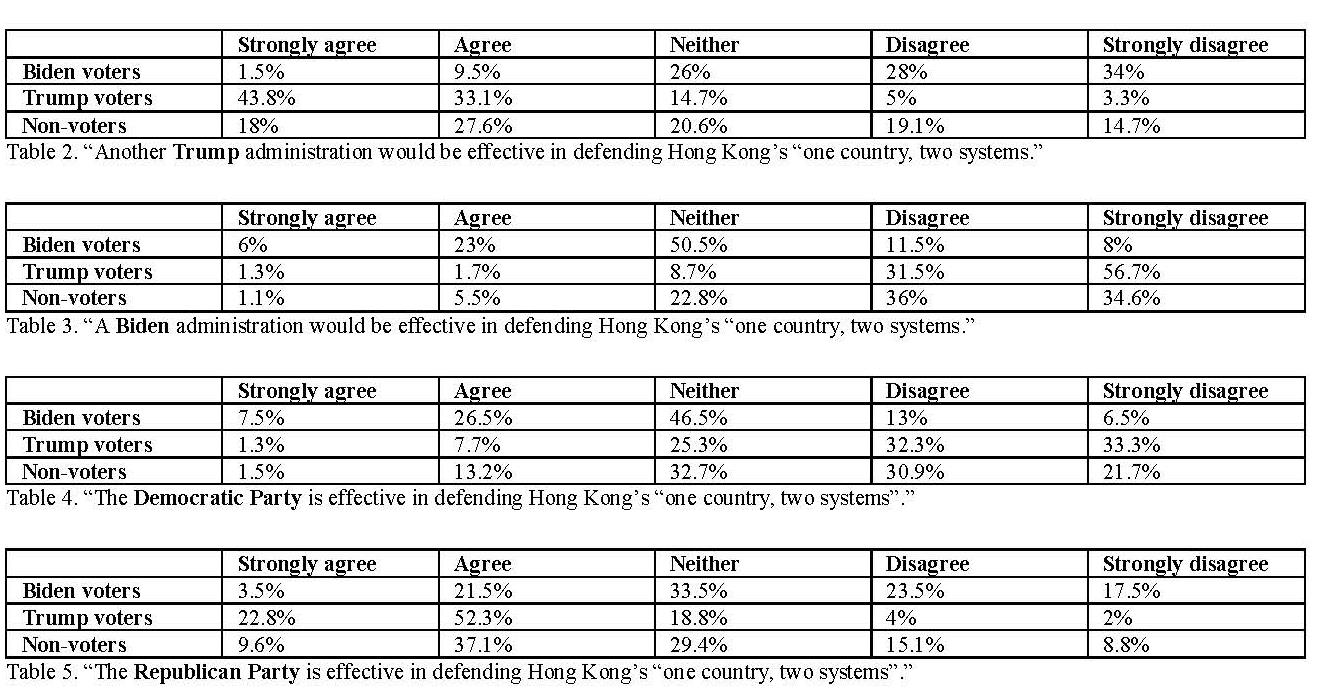 The strongest consensus is on the need for bipartisanship in countering Beijing. (See figure 4.) As many as 83 percent of the Biden camp, 67.2 percent of Trump supporters, and 68.3 percent of non-voters “agree” or “strongly agree” that it takes bipartisan support for the United States to be effective in protecting Hong Kong. An extreme majority of 814 knew that the 2019 Hong Kong Human Rights and Democracy Act was passed by both the Republican-dominated Senate and the Democrat-controlled House of Representatives. 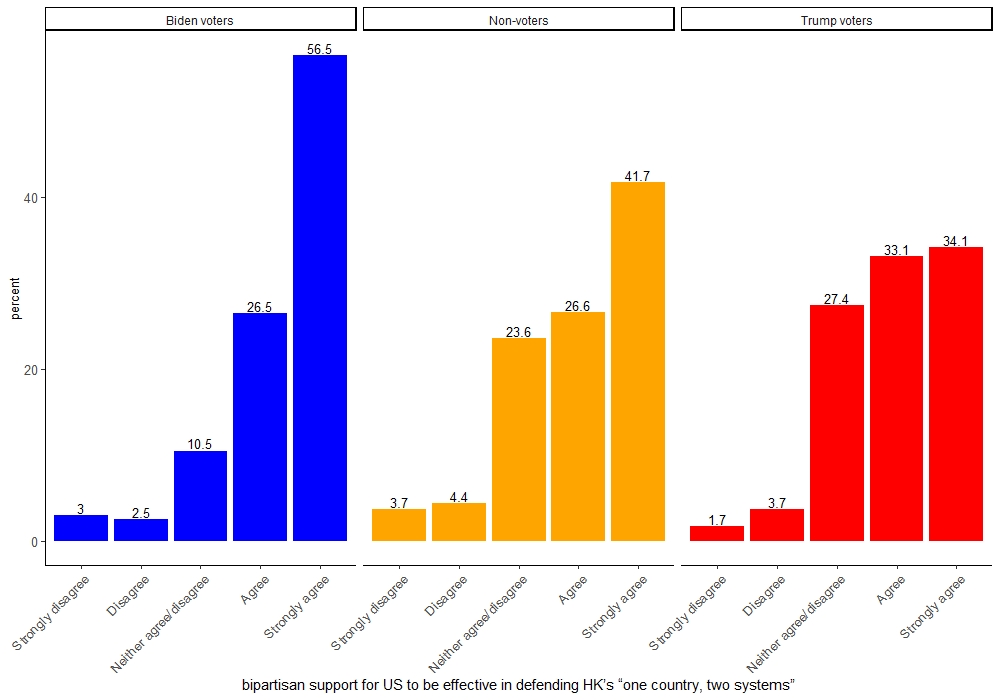 If Hong Kong Americans lack confidence in Biden, the path forward is to turn their energies toward lobbying the new administration to take effective measures. Biden called the national security law a “death blow” to the city’s freedom. The Democratic Party platform pledges to “fully enforce the Hong Kong Human Rights and Democracy Act, including by sanctioning officials, financial institutions, companies, and individuals responsible for undercutting Hong Kong’s autonomy.” Blinken has argued that, if Beijing enjoys impunity over Hong Kong, it would be emboldened to target Taiwan next. The new administration should address the confidence deficit by clearly spelling out its Hong Kong policy.

Worry about the reliability of Democratic presidents is based on a selective reading of past and current events.

What Does a Biden Presidency Mean to Hong Kong’s Democratic Movement?

Many in the Hong Kong protest movement saw Donald Trump as their only hope, but they shouldn’t give up on the Biden administration.

US Presidential Elections 2020: The Future of Hong Kong

The law fits squarely within both the hawkish turn in China policy specifically and the tradition of U.S. human rights policymaking generally.