The 2015 Gorkha earthquake was a singular natural disaster that has defined Nepal’s economic development in the latter half of the 2010s. Hit particularly hard by the earthquake was the once-booming rainbow trout farming industry in the hill district of Nuwakot, located northwest of the national capital, Kathmandu. The district is blessed by the Himalayas with cold water streams that are favorable to rainbow trout. The farming of this fish is an economic boon in these far-flung parts, where most young people leave their ancestral homes for greener pastures. However, the 2015 earthquake decimated much of the infrastructure needed for its cultivation.

Though the earthquake struck half a decade ago, there are still lingering effects on the economy of these businesses, which are struggling to recuperate even now. How can natural disasters half a decade ago still affect people of the region? What was the Nepali government’s reconstruction plan, if any? How has rainbow trout farming continued after the earthquake?

The rainbow trout is an immigrant fish here in the remote hills of Kakani Rural Municipality in Nuwakot District, Nepal. Far from its native temperate tributaries that flow into the Pacific Ocean, the Oncorhynchus mykiss finds itself in the tributaries of the Trishuli River, which will ultimately end up in the torrid Indian Ocean after it merges with the Gandaki, a major Gangetic tributary in the Terai Lowlands of Nepal.

The first attempt at introducing rainbow trout aquaculture in Nepal was made back in the 1970s after the fish was first gifted to the Nepali King Mahendra by the British government. Unfortunately, its further cultivation was unable to gain any foothold in the Nepali hills due to a lack of aquaculture infrastructure. However, attempts at establishing aquaculture were revived through a collaboration with the Japan International Cooperation Agency (JICA) and the Nepali Government’s National Agricultural Research Corporation (NARC). Through this international cooperation, the trout made its splash in the Trishuli Fisheries Research Station. The establishment of this hatchery allowed the farmers of Trishuli region to repurpose their local streams into concrete raceways that provided adequate conditions for the fish to thrive. Located 2,000 meters above sea level, the streams meander through the hills of Kakani and are a constant source of running water that maintains the proper temperature range of 10-20 degrees Celsius. This is in contrast to the vast majority of fish farming in Nepal, which is done in the Terai lowlands’ warm waters.

At approximately $15 per kg for fresh raw trout at the time of writing, it  is significantly more expensive than other fish in the Nepali market. However, this might pose its own set of challenges when the average consumption of fish in Nepal is at only 2 kilograms per capita (according to 2013 data). However, the trout farming has been profitable for most involved and is a boon in these far-flung hills where most young people are emigrating to Kathmandu or abroad in search of expanded opportunities.

According to a 2016 study conducted by the Nepal Agricultural Research Center, the number of trout fisheries along with production has grown steadily since Japanese assistance in introducing trout aquaculture to Nepal. With the successful entry of trout aquaculture into the remote hills, the NARC had expressed its commitment to further expand the private aquaculture sector and improve facilities and feed to export quality. By 2016, there were 85 private farms established in 16 hill and mountain districts covering a raceway area of 13,161 square meters. In 2016, production peaked with 400 metric ton of fish produced. This study concluded that the biggest obstacles to rearing fish suitable for the export market is the lack of quality feed, and it recommends expansion of feed production to further stimulate the trout aquaculture sector.

“I feed the fish prawn that I personally import,” said Lal Bahadur Lama, the proprietor of the Himali Rainbow Trout Farm in Kakani. The rainbow trout feeds on insects in the wild and consequently requires high protein feed. “I procured my fingerlings from Dhunche, Rasuwa,” Lama explained, referring to the Rainbow Trout Fisheries Research Station located in the mountain district of Rasuwa bordering the Tibet Autonomous Region.

In 2016 the number of trout hatcheries in Nepal had increased to 30. Lama and his brother run this establishment, which is one of the first private trout farms in Nepal, established 18 years ago. In fact, Lama had gone to Japan to receive training in aquaculture. “Our high-quality feed ensures we have good quality fish,” said Lama whose business offers free home delivery to Katmandu (a 90 minute drive away) for orders above 5 kilograms. 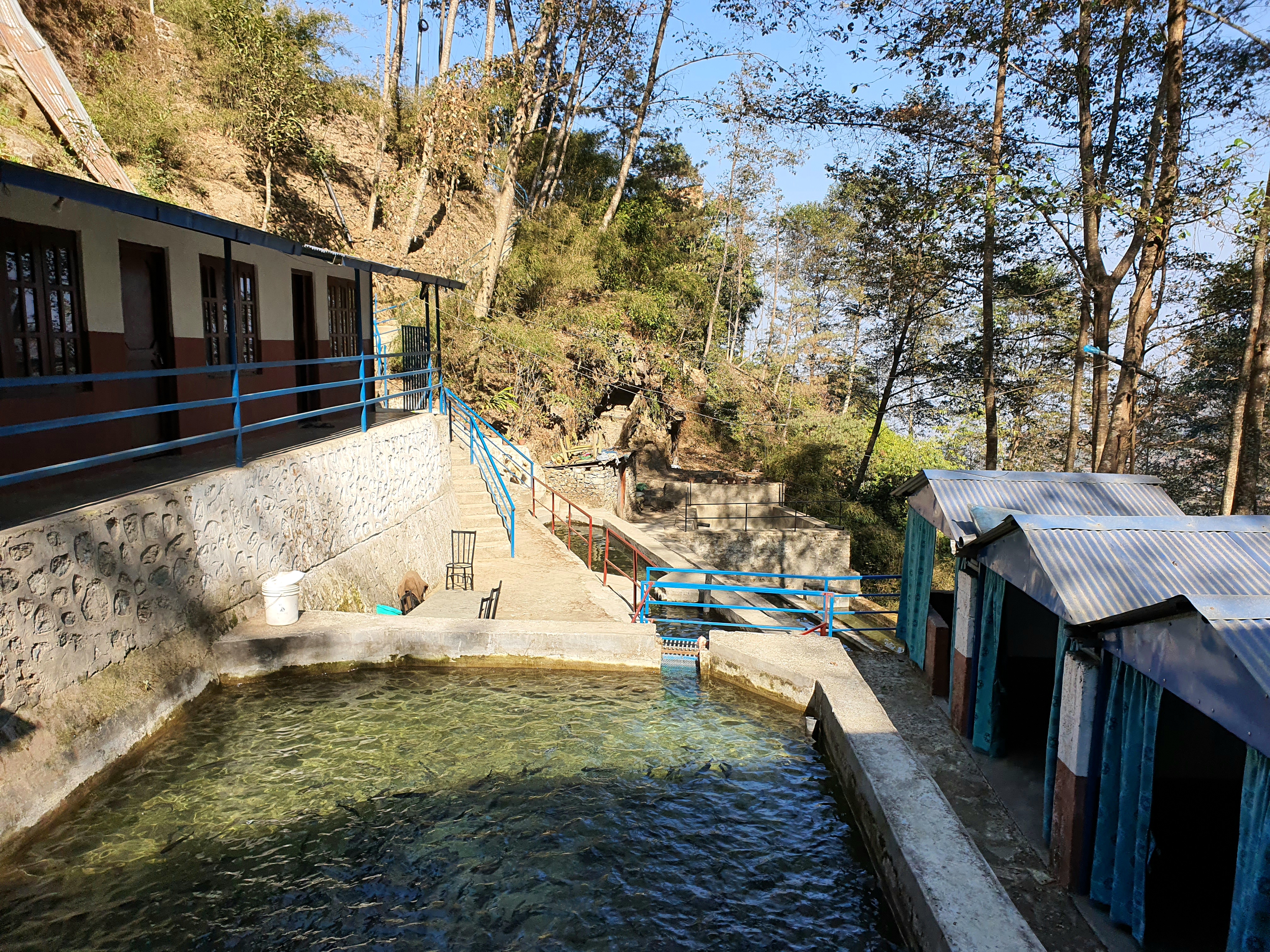 Despite the previous boom in trout farming, the last few years have presented many challenges to the private trout fisheries in Kakani. “The biggest obstacle to our business is the slow upgradation of the Highway,” said Lama, referring to the Pasang Lhamu Highway (named after the first Nepali woman to scale Mt. Everest) which is currently undergoing expansion from a one-lane road to a two-lane road. Though there is heavy machinery at portions of the highway (bulldozers, excavators) leveling the steep hillsides, “the road work already ran out of their allocated budget this year,” Lama says.

“In fact, our business has slowed down since the 2015 earthquake,” said Lama, referring to the massive 7.8 magnitude earthquake that devastated many of the concrete raceways used to farm trout. “Then the road upgradation started, and this road was shut down for a year. This year, our business was hit by the coronavirus pandemic.” The service sector was hit particularly hard by the four-month lockdown in Nepal.

Sonam Lama, the owner of Fall & Trout Village Fish Farm only a few kilometers away from Himali Trout Farm, had a similarly gloomy outlook. While the latter was built as a restaurant, this trout farm is fashioned as a resort with rooms and conference halls to attract a corporate market. “This year has been hard for us with the virus and the subpar road,” he said, looking at the vast and empty resort with a stunning view of the valley below. 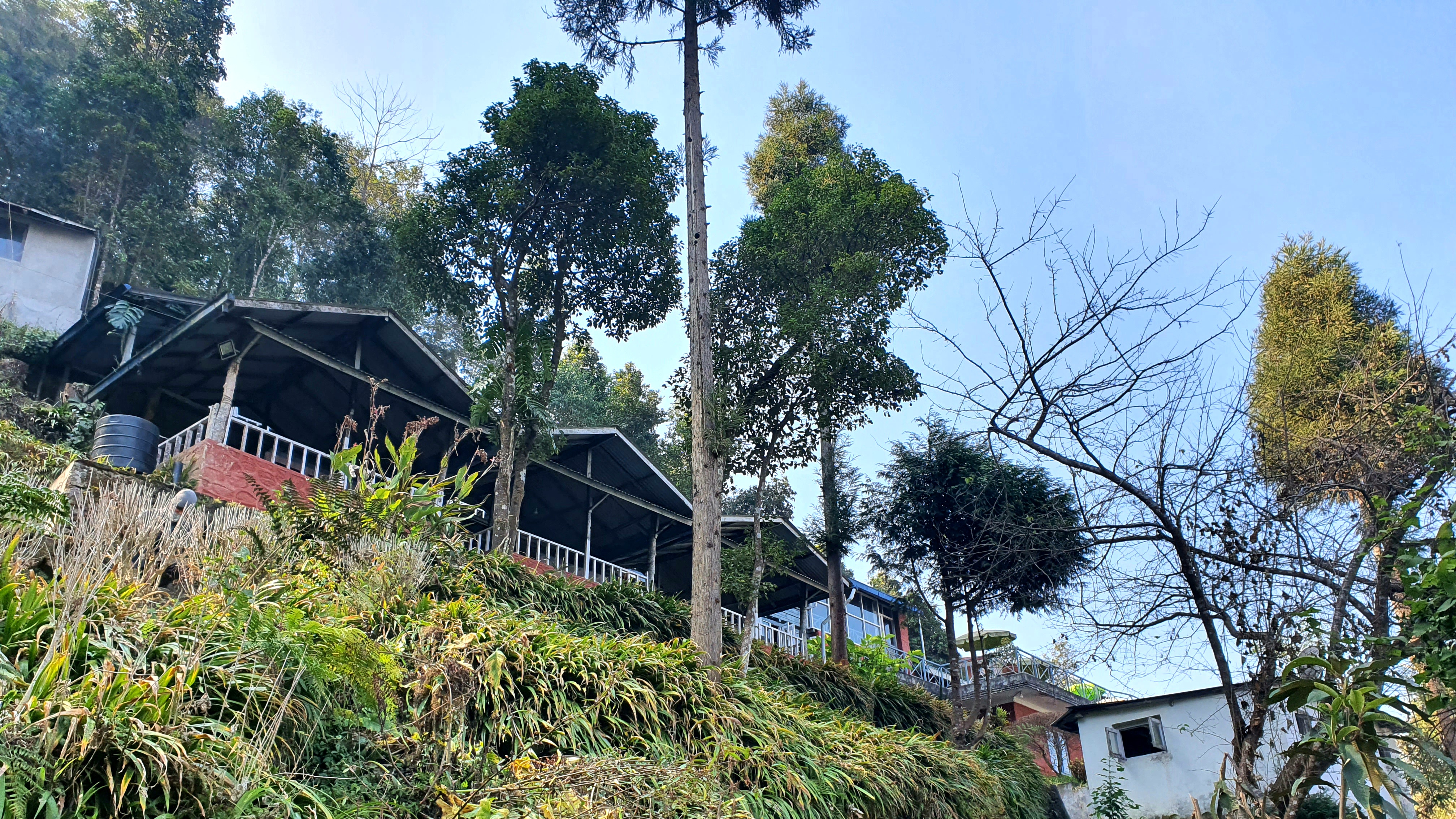 “I’m optimistic the road will get built someday,” said Kancha Lama Pakhreen, the owner of Pakhreen Rainbow Trout Machcha. “These things take time. You can’t rush building roads in such difficult terrain.” Pakhreen’s Trout farm is relatively new at eight years. It is a smaller operation than the previous two examples. “Though the highway is yet to be completed, we have seen an uptick in people coming here since the end of the lockdown. I’m sure the market will bounce back someday.”

Though the boom in trout farming has stuttered in the last five years, there are signs it will continue in its upward trajectory. Currently, tourism is the biggest target of foreign direct investment in Nepal. Though the Nepali economy was hit hard by the COVID-19 pandemic, its GDP growth rate managed to stay afloat at 1.8 percent (a fall from 2019’s 7 percent). At the time of writing, the Nepal government has begun its first phase of vaccinating the population against COVID-19.

“Once the virus goes away, and the road construction is finished, consumers will come flocking to our fish once again,” says Pakhreen with a smile.

Harsh Mahaseth is an Assistant Lecturer and Faculty Board, JGLS Pro Bono Publicus, at Jindal Global Law School, and a Research Analyst at Center for Southeast Asian Studies, Jindal School of International Affairs, O.P. Jindal Global University. He completed his Master of Laws in Asian Legal Studies from the National University of Singapore.

Chitij Karki has recently completed his MBBS from KIST Medical College and Teaching Hospital, Nepal. He has an avid interest in literature, philosophy, and politics.

The reopening is mostly limited to those seeking to to climb or trek Nepal’s famous peaks.

With a global economic slow-down and potentially millions of foreign workers returning home, Nepal could be on the brink of a humanitarian catastrophe.

Is Nepal Going the Way of Sri Lanka?

Although Nepal’s economic health is worrying, tourism is picking up and foreign remittances are poised to increase.