The Pul-e-Sukhta bridge in West Kabul separates two completely different worlds. The chaotic norm of daily Afghan life overlooking a dried-up river bank is contrasted with a dark scene under the bridge of thousands of drug users huddled over heroin, meth, and opium. At a corner joining both worlds, last year breakdancer Sajad Temurian met his father for the last time.

Temurian’s father, Habibullah, was a chronic drug user in the Pul-e-Sukhta area, a well-known meeting point for dealers and users from across Afghanistan. Temurian would find his father there whenever he did not return home. Sometimes his father would disappear for months.

The last time he saw his father, Temurian barely recognized him. “His bones were out of his body,” he said. “The drugs forced it to the point where he was barely eating or drinking, and so his body gave way.”

In their last moments together, he recalled his father thanking him apologetically and wishing him a better life. As they parted ways, he knew instinctively that this would probably be the last time he would ever see his father alive. 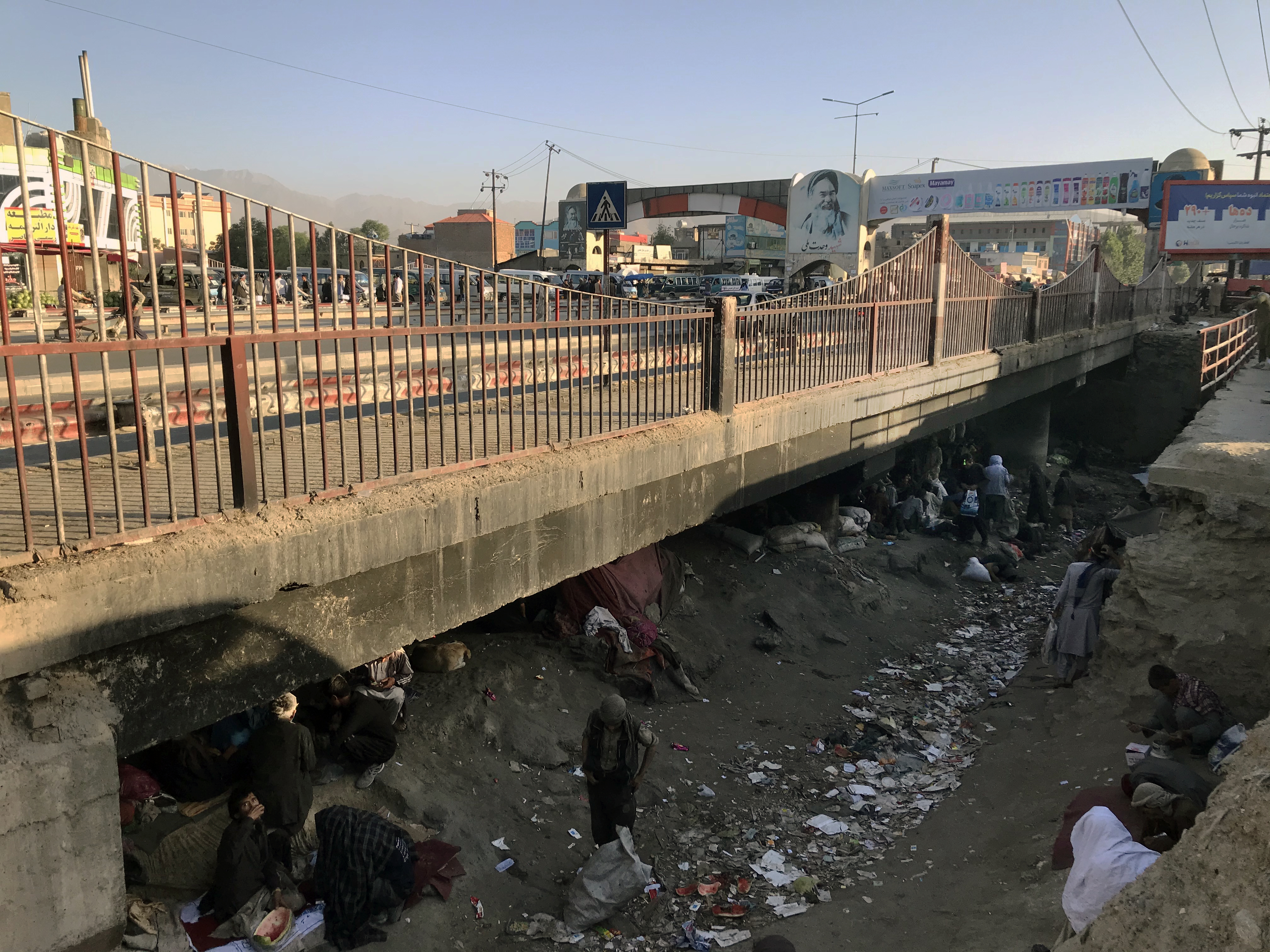 In the Pul-e-Sukhta area two worlds collide, drastically different scenes play out above and below the bridge. Photo by Barialai Khoshhal.

Temurian’s story is not uncommon among young generations growing up in Afghanistan. The country faces an ongoing mental health crisis fueled by decades of war. Children are forced to step into guardian roles prematurely because their parents have either died or developed psychological problems from the conflict. This trend continues as violence and civilian casualties persist across the country, and uncertainty builds amid the U.S. troop withdrawal, planned to be completed by September.

Temurian experiences anxiety and depression but does not seek professional help. Instead, he finds solace in breakdancing. He uses hip-hop as a tool for expression and a way of distancing himself from the challenges of living in Afghanistan. He describes breaking as calming — “it removes any bad energy.”

“A lot of people experience depression here, but they don’t acknowledge it,” Temurian explained. “If the situation changes, if there’s hope, then depression can be cured.” Public support systems exist across Kabul, including therapy and counselling for trauma and stress and detoxification for drug users. All programs are offered for any age group without cost.

Dr. Bashir Ahmad Sarwari, head of the Mental Health department at MoPH, explained that a wide range of individual, socioeconomic, and cultural factors deter individuals from seeking help from such programs. “Stigma, shame, deprivation, ongoing conflict and displacement are all reasons why people do not seek help,” he described.

De-stigmatizing mental health illness is a primary focus of the national strategy, but the country is under-resourced when it comes to a structural support system. According to the World Health Organization, there are two mental health workers per 100,000 people in Afghanistan. However, even those limited resources may not be adequately trained to diagnose and treat mental health conditions properly. Researchers say that stigma is amplified by cultural perceptions that people with mental health conditions are possessed. 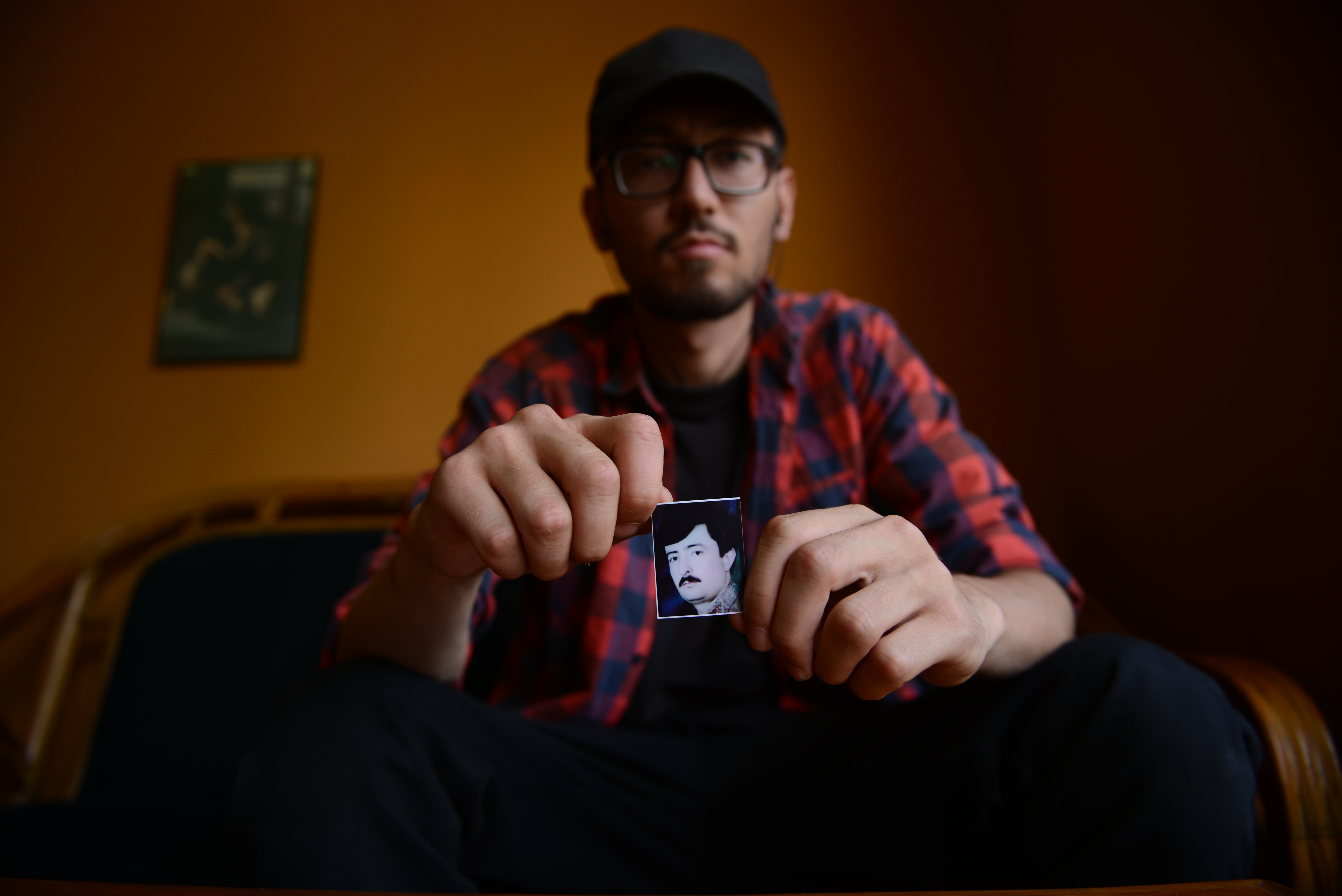 Sajad Temurian with a photo of his late father, Habibullah. Photo by Barialai Khoshhal.

Drug usage adds to the problem. Afghanistan accounted for approximately 84 percent of global opium production over the past five years. Growing use in the country rates reflect this accessibility. There were about 1.9 to 2.4 million adult drug users as of 2015, up from 940,000 in 2009. The average cost for one dose of heroin in Afghanistan is between $0.20 to $1.50. Sarwari explained that without follow-up treatment, it is easy to relapse. “Patients start using again because of access, the continued conflict, and the lack of relapse prevention programs.”

Temurian’s father suffered from repeated relapses. He fought in multiple wars since the Soviet era and started using morphine while living as a refugee in Iran to cope with post-traumatic stress. He eventually transitioned from morphine to heroin.

Temurian tried repeatedly over four years to take his father for treatment, but Habibullah was resistant and kept using. As the eldest, the young man was forced to step into a parental role whenever his father  disappeared. He is 26 now, but he has been taking care of his mother and younger siblings since he was a child. As a result, he didn’t pursue an education past high school.

“I found work when I was 11,” he recalled. “I did a lot of things one cannot even imagine, basically any type of hard labor.” He explained further, “I knew I needed to pay the rent and help my father and family. But it was difficult.” He started breakdancing when he was 20 and has used it as a coping mechanism ever since, an escape from the harsh realities of everyday life.

Breaking is still gaining popularity in Afghanistan but is part of a wider hip-hop community – of rappers, beatboxers, and graffiti artists – collectively gaining traction. Temurian is part of a crew in Kabul called Superiors Crew, with nine members ranging from the ages of 15 to 27.  He explained that breaking started in Kabul about 10 years ago.

His crew trained together previously at a gym in West Kabul, but the gym was targeted by suspected suicide bombers back in early February. They believe that they were targeted because they practice with a female member, Manizha Talash. 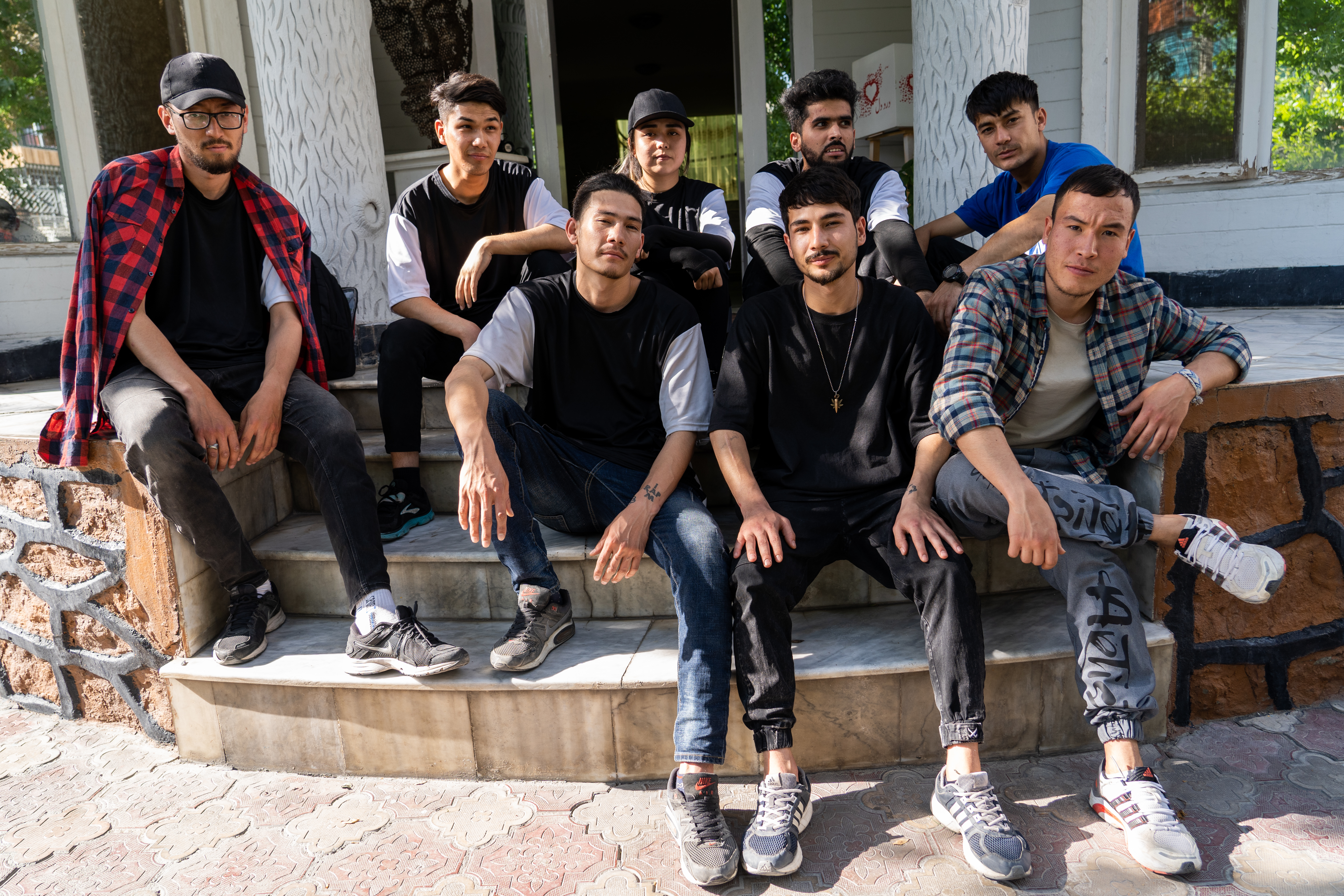 The suspects pretended to be students interested in joining the club, watching the group practice twice. On their second visit, an undercover policeman tracked one of the suspect’s phones from Logar province to the club, where he had been under investigation. The officer worked with Afghan security forces to stop the suspects before they could carry out an attack.

“We were told not to move and to sit in the corner as 15 to 20 soldiers with different weapons entered the club,” described fellow B-Boy Tamim Saberi. “Everyone felt scared.” The incident forced the group into hiding for fear of a second attempt. They only recently started practicing together again and re-surfaced on social media in May.

The breakers hope to one day participate in global events like Red Bull BC One and the UDEF Pro Breaking Tour. Even before the targeting of their gym, they faced dangers. A bomb exploded outside one of their breaking exhibitions in December 2020.

Temurian just wants a safe place to train. He hopes continuously for a better life for his siblings, wishing that they will not grow up with the same degree of hardship he did. Right now, he tells his 5-year-old sister that he is her father.

He believes that Afghan children can find hope in different art expressions. Breakdancing has been his escape and an escape for his fellow crew members. “When we break, we do things we thought we were never capable of. We move in a way that only we can express,” described Saberi. 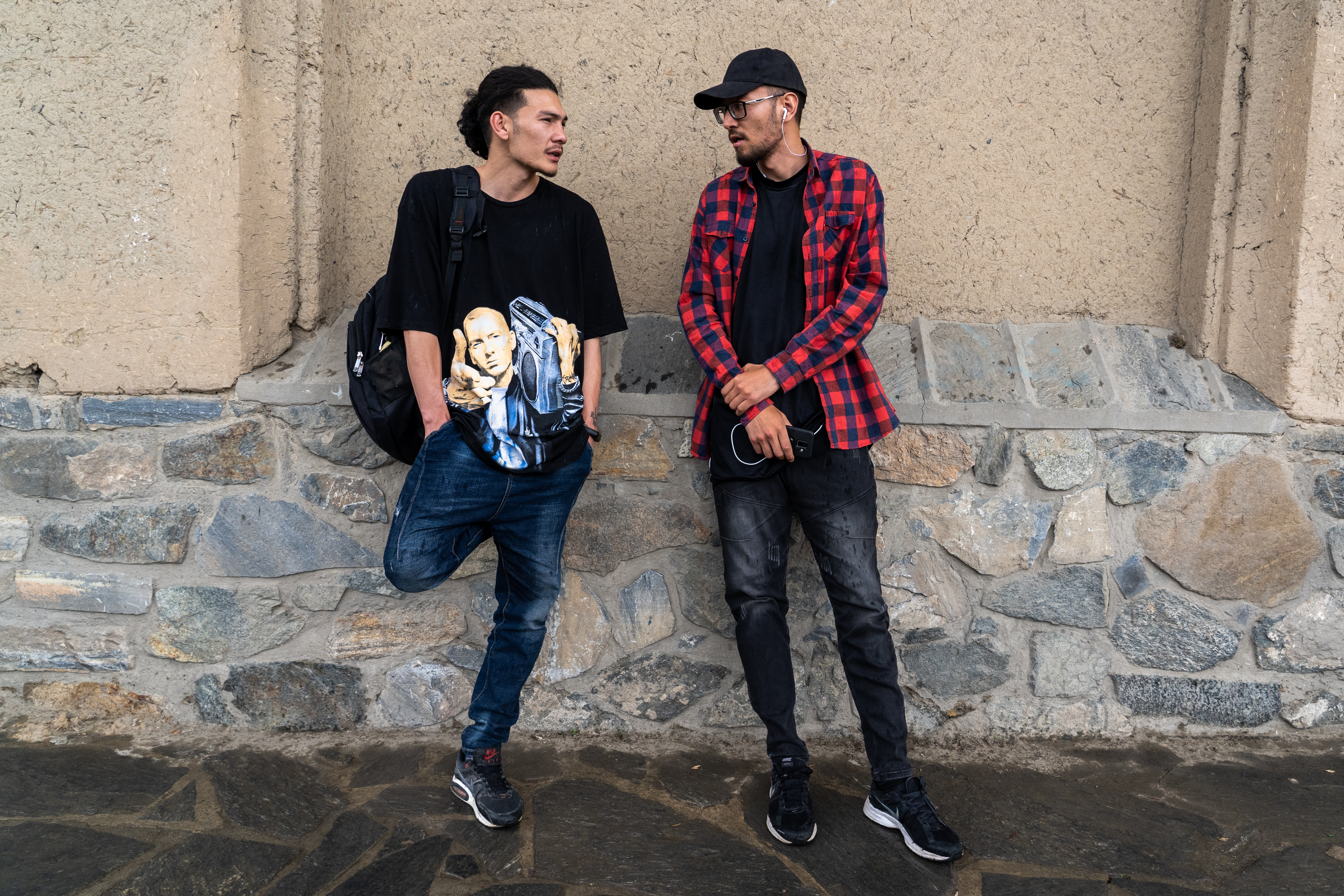 Breakdancing is taboo in conservative Afghan culture, but this does not matter to Temurian. He wants to think without the influence of religion and societal expectations. His family and the community within District 13 in Kabul, where he lives, are primarily Shia Hazara. While his family supports him, they do not understand what he is doing.

But for the artist, breakdancing gives him a sense of purpose. For young adults growing up in conflict and struggle, expression and community are meaningful for healing. For Temurian, it helps him get over the pain of losing his father and struggling to help his family survive.

Temurian thinks about his father often and their moments together. “He was a good man, but he just gave into the pain.” 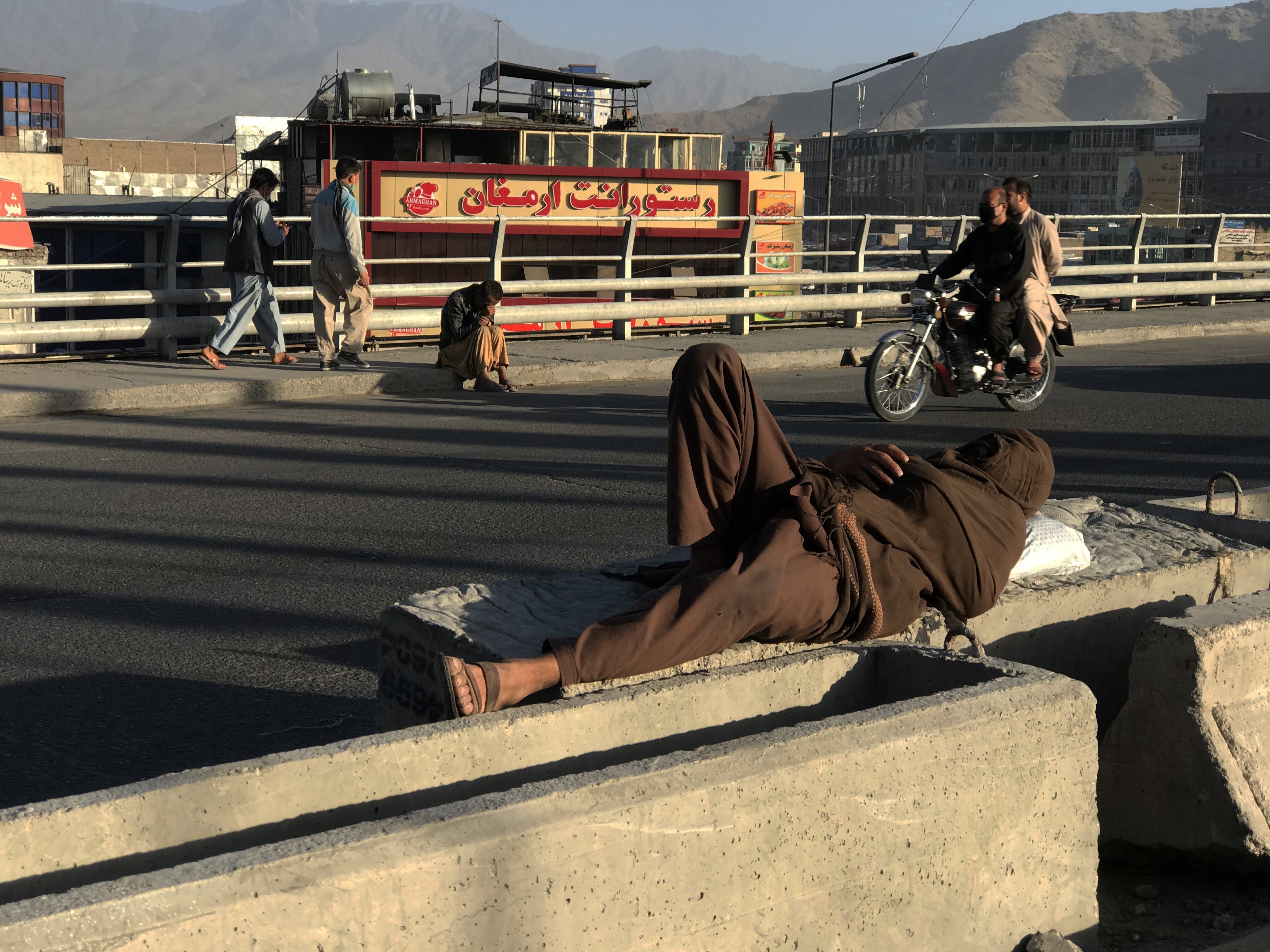 Scenes from the Pul-e-Sukhta area. Photo by Barialai Khoshhal.

Understanding the Taliban’s War on Women

The Taliban’s regressive ideology lies at the heart of its political program. It was naive to believe the group would ever give it up.