The gay former Icelandic Prime Minister Jóhanna Sigurðardóttir said, “It is absolutely imperative that every human being’s freedom and human rights are respected, all over the world.” Sigurðardóttir’s message, delivered while defending LGBTQ+ rights at a 2014 Pride festival, would certainly have been welcomed by LGBTQ+ communities as far away as Vietnam, a country that still, like much of Asia, hasn’t fully advanced LGBTQ+ rights as yet.

It has been over a year since columnist Thoi Nguyen’s article “The Fight for LGBT Rights in Vietnam Still Has a Long Way To Go” was published in The Diplomat and it is fair to say that prejudice, discrimination, and stigma against the LGBTQ+ community still looms large, despite the ongoing efforts of local activists.

Nguyen’s piece gave a concise history into how far LGBTQ+ rights have come since homosexuality was declared a “social evil” by state-run media in 2002. While same-sex weddings have been allowed since 2015, couples aren’t fully recognized or protected under a loophole in the law regarding personal and property matters.

To honor Pride month, The Diplomat decided to follow up on Vietnam’s LGBTQ+ family and interviewed a selection of members of the community to find out how they have been faring throughout the pandemic.

Dave Khanh*, who wished to remain anonymous, is a 26-year-old working part-time as a professional dancer and English tutor. Khanh is gay and recently spoke to The Diplomat over Zoom.

“Hopefully, gay marriage will be fully legalized in the next 10 years when the younger generations have more power and say,” said Khanh.

“It is still quite challenging being gay in Vietnam, especially in the Northern and Central areas, whereas in the South, like in Ho Chi Minh City, it is a bit more open.”

Khanh confided about having a “rough time” in high school, where he was sometimes bullied for feminine mannerisms and underwent what he referred to as a form of “psychological trauma.” He went on to say that he isn’t ready to come out to his parents but said he will soon. Even today in Vietnam, it isn’t uncommon for parents to send their children to see a doctor if they think they are gay or a lesbian.

A 2020 Human Rights Watch report outlining details of homophobia and stigma in Vietnam concluded with the need for necessary changes to occur. “The first steps will include correcting the persistent widespread notion that homosexuality is an illness and needs a cure,” the report stated.


Even more disturbing is the prevalence of suicide within Vietnam’s LGBTQ+ community. “One of my lesbian friends tried to commit suicide… not long ago because of the family and societal pressure she was under,” Khanh said.

During the lockdown periods, Khanh has been working online, reading books, and watching documentaries about psychology. In Central Vietnam, there aren’t many gay bars and the most common way for gay couples to meet is over social media. He admitted the pandemic period has been hard on his romantic life as he is currently separated from his boyfriend, who is residing in the United States.

Tri Le is a 24-year-old medical student from Danang. Unlike Khanh, he was able to come out to his mother who is, fortunately, supportive.

“More and more people from the younger generations in Vietnam are coming out now but their families aren’t always as supportive as mine and the older generations tend to have a negative attitude or prejudice towards this new trend,” he said.


Le believes that LGBTQ+ issues are just like any other human rights issues and he hopes that Vietnam’s government and its society in general will be able to treat them as such.

“My mother is quite supportive of my sexuality and didn’t force me to marry anyone so I am quite lucky. I think same-sex marriage will be fully legalized in the future but it is probably going to take another 10 years or more. More and more people are becoming acceptive of gay culture and with better education, in schools, the situation will hopefully improve for us,” said Le.

He thinks that young people’s education is the most important obstacle surrounding LGBTQ+ issues in Vietnam and he sees it as a basic health and safety issue: “Many young people want to get information about their sexuality and so they will often search on the internet about that but sometimes that isn’t useful and can be unsafe.”

Nguyen Thi Hang is the leader of the Proud Team in Danang. She manages a LGBTQ+ Facebook page, Danang LGBTQ+ Community Confessions, and is also a board member of a women’s group, the Vietnam Women Love Women Network. During the day, Hang voluntarily supervises an LGBTQ+ facility center which provides free HIV testing, PrEP, condoms, and informational brochures about LGBTQ+ issues. 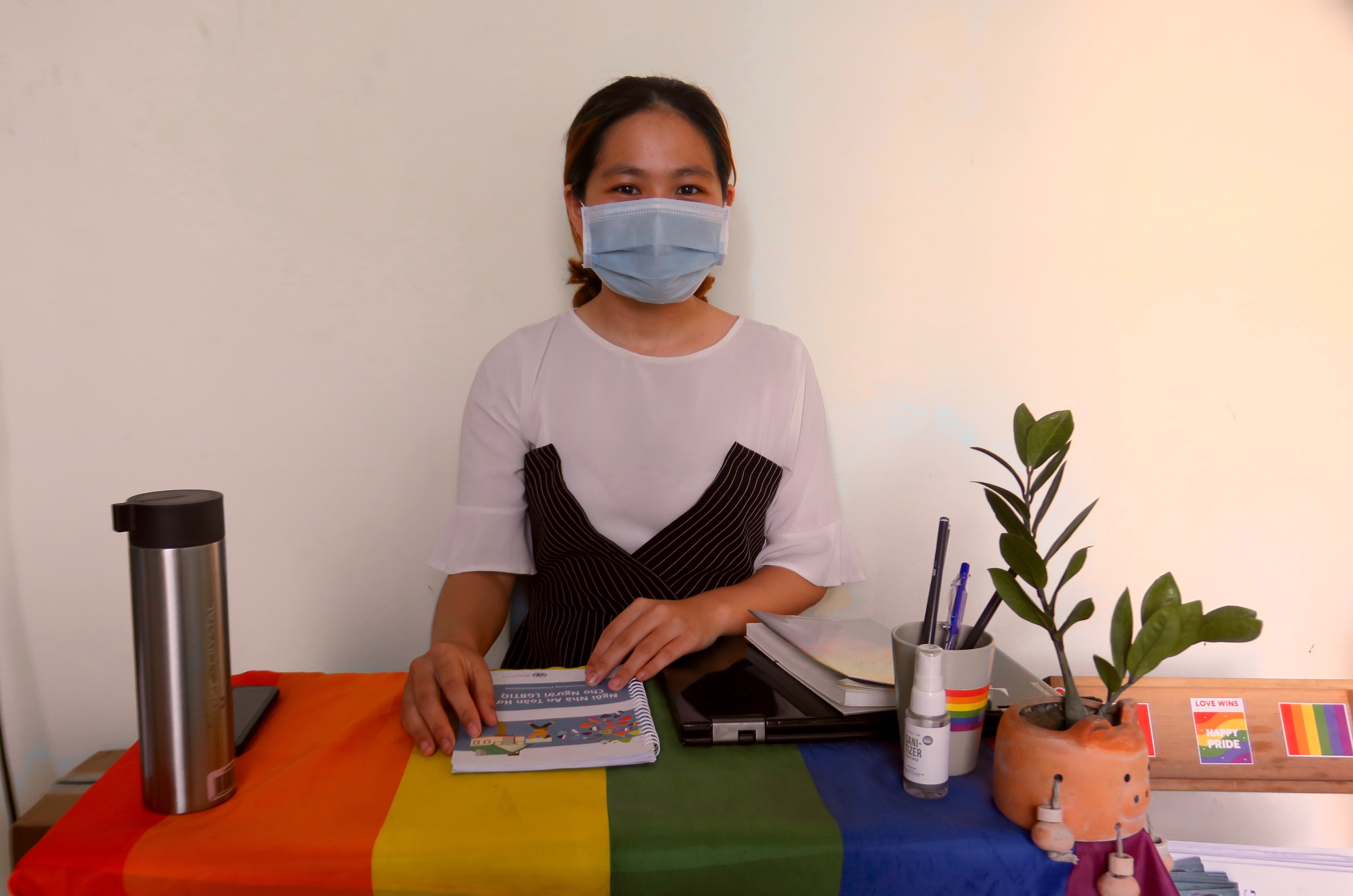 Nguyen Thi Hang at the LGBTQ+ facility center in Danang that she supervises. Credit: Hugh Bohane.

“The center has grown in the last two years and more and more young people are coming in to get free HIV tests and other support. Almost 30 percent of the people we tested this year tested positive for HIV and this is due to the lack of proper safe-sex education,” said Hang.

Hang connects those who test positive for HIV with a medical facility in Danang and if they have health insurance and they are from Danang, they can receive HIV medication for free.

“Not all health care workers in Vietnam know enough about LGBTQ+ health issues so I send people to a specific health center, the Center for Disease Control (CDC) that does have experience in treating people with HIV and other related illnesses.”

In Hanoi, there is another organization doing important work called the iSEE Institute, which in its own  words, “Supports and empowers all communities and individuals to promote and protect their rights and the rights of others in their lives.” Vuong Kha Phong is currently the group’s LGBTQ+ program coordinator and handles the promotion of Pride events in Vietnam. 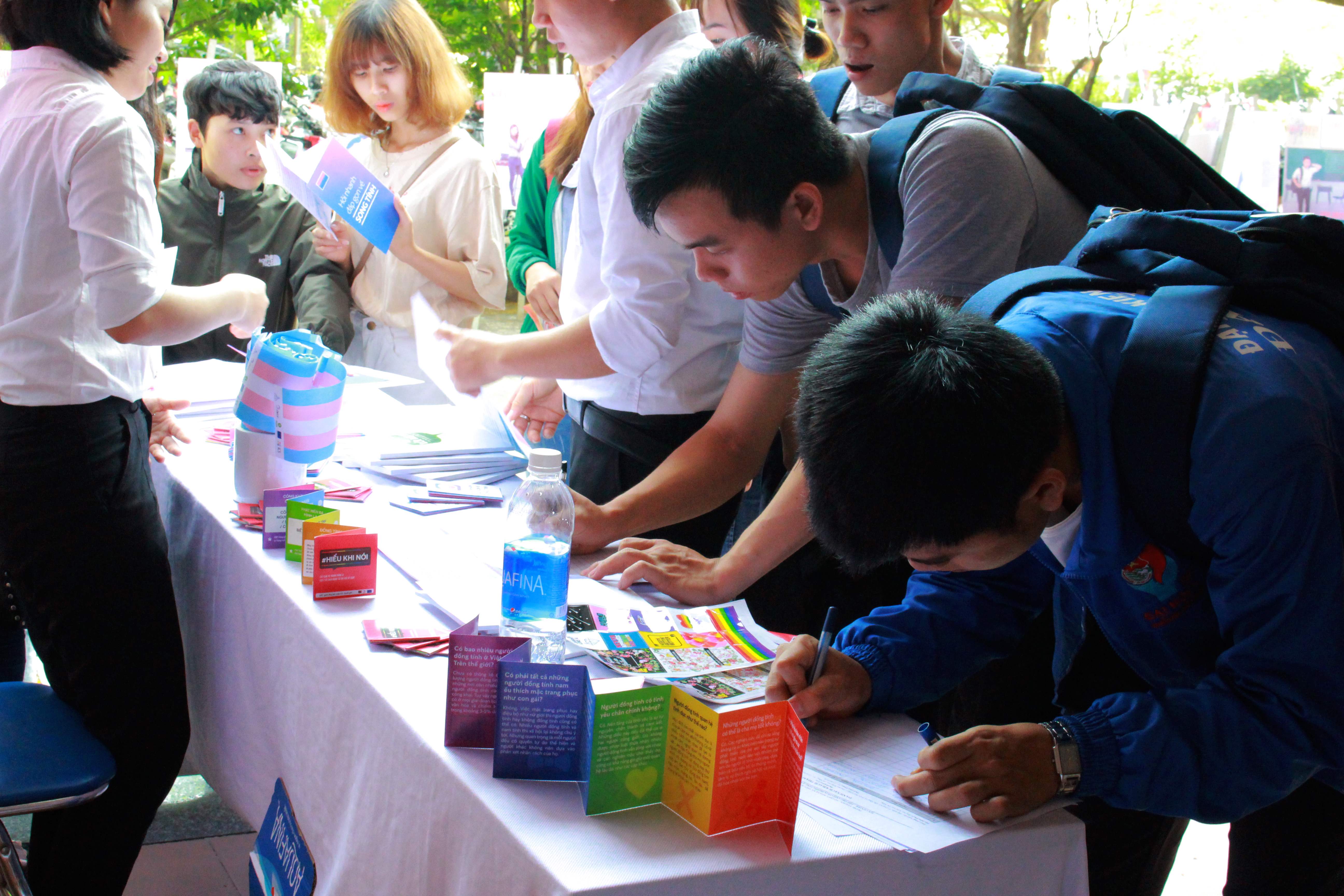 “We provide strategic, technical and financial support to the LGBTQ+ community throughout all of Vietnam and implement projects that address local issues. For example, we have a grant program called ‘Hands & Voices’ which covers Viet Pride events, local initiatives for same-sex marriage and cross-collaboration with the under-represented, such as transgender people,” said Phong.

The institute engages in policy advocacy to improve the protection and recognition of LGBTQ+ rights within a legal framework for Vietnam. One ongoing process includes the amendment to the Civil Code (2015), legalizing the rights of transgender people to access legal gender recognition, and the “I Do” campaign, which started in 2013 and advocates for same-sex marriage to be fully recognized under Vietnamese law.

This month iSEE launched a crowd-funding campaign for “I Do,” raising over 150 million Vietnamese dong (around $6,500) from more than 1,200 individuals, money that will be distributed through the “Hands & Voices” grant program to support local initiatives supporting same-sex marriage. The organization hopes to bring more awareness to the LGBTQ+ family across all of Vietnam’s provinces and cities. 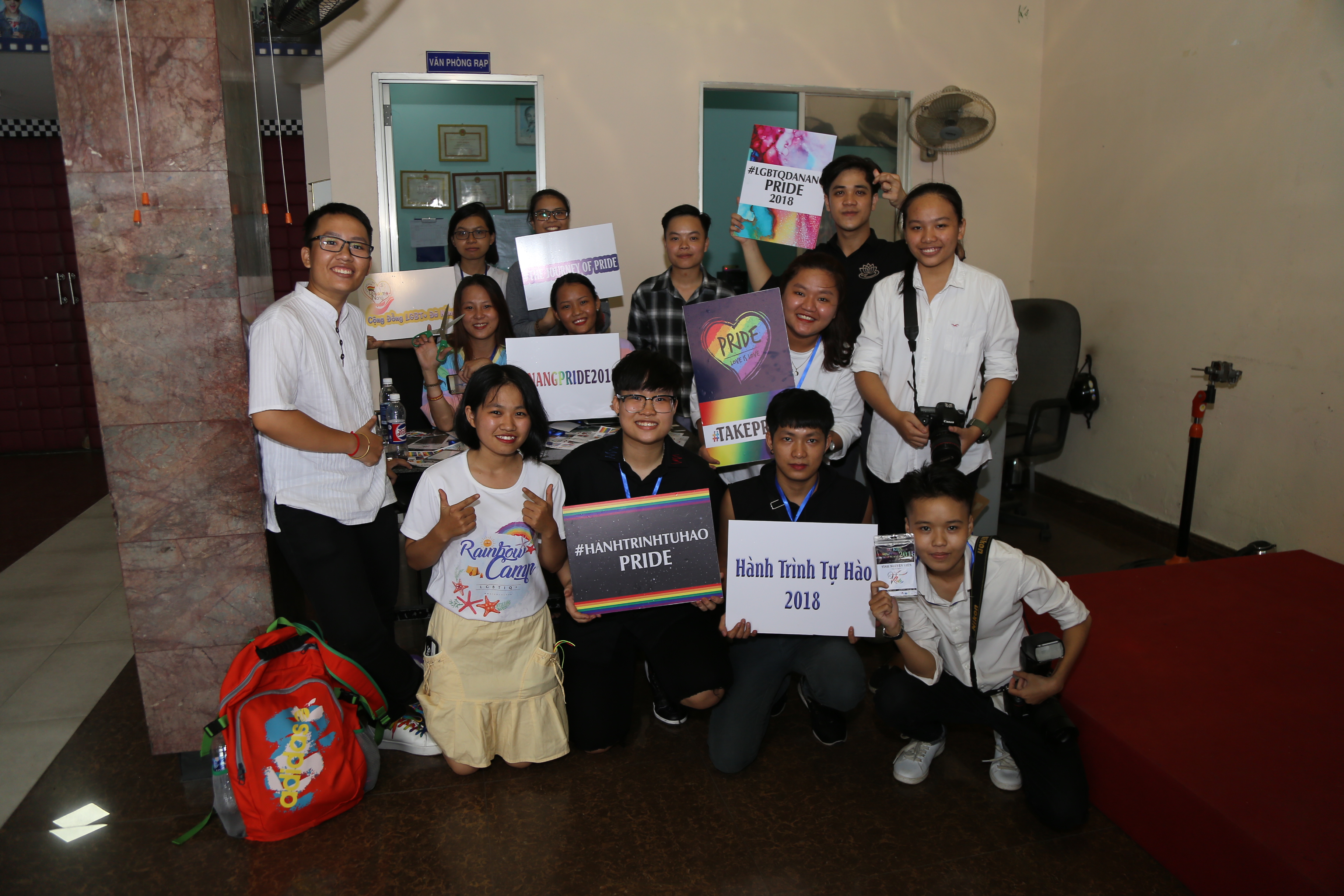 Volunteers at a Viet Pride event in 2018 at Danang University. Credit: supplied by Nguyen Thi Hang.

“Pride month in Vietnam is actually in August and September every year and we are members of the organizing committee for Hanoi Pride, so we will also provide technical and financial support for Pride organizations across Vietnam to organize Pride in people’s provinces, and support the Viet Pride working group to coordinate all of these events, ” said Phong.

One of Phong’s colleagues, Luong The Huy, was the first openly gay candidate to run for Vietnam’s National Assembly a few weeks ago. Huy received a lot of backlash in the local media during his campaign and despite taking a break from all kinds of publicity he was able to give The Diplomat a comment: “I hope we all are safe not just because we are in the middle of this pandemic,” he said, “but also because the LGBTQ+ community have been unsafe for so long that we know how important a safe place is.”

The country's Health Ministry has instructed doctors to stop treating homosexuality as a disease, and to cease discrimination in medical care.