North Korean authorities are incorporating cutting-edge technology into their efforts to control the country’s border with China.

According to a source in the country, the authorities plan to use 5G mobile communications technology to monitor the situation along the border from as far away as Pyongyang with surveillance cameras.

In fact, the country has already created a 5G network along part of the border in the city of Sinuiju, North Pyongan Province, and has reportedly launched trial operations.

The move is part of the country’s plan to construct a 5G surveillance network along the border, the source said, speaking on condition of anonymity.

Based on the source’s account, at least one camera was installed every 100 meters. The cameras were installed where smuggling and defections are rife because the authorities have difficulty keeping the area under direct surveillance.

Because the cameras rotate 360 degrees as they record, North Koreans may face more difficulty in attempting to conduct smuggling or defect across the border – as long as the equipment is operating properly. The installation of the new cameras basically means significant surveillance blind spots have disappeared, albeit only along parts of the China-North Korea border. 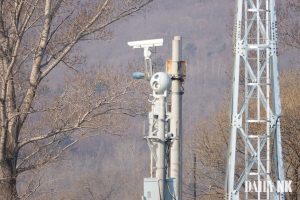 Although border patrol troops based along the Sino-North Korean border have managed the existing network of cameras, the new cameras are directly monitored and managed by the Operations Office of the Ministry of State Security in Pyongyang, according to the source.

Given the fact that border patrol troops often turn a blind eye to illegal activities in collusion with local smugglers and “brokers,” the security ministry has not given them authority to monitor the cameras. Instead, they have simply been tasked with physically maintaining and inspecting the devices, the source said.

The authorities can remotely monitor the border cameras from Pyongyang thanks to the installation of 5G equipment and recently-developed cameras along stretches of the border, he added.

North Korea has allegedly been acquiring equipment from China to build 5G networks since 2019.

“I understand that China agreed to cooperate [with North Korea] as Beijing was building a 5G network along the border in 2019,” another source in North Korea said, speaking on condition of anonymity. “North Korea acquired 5G communications equipment [from China] at that time.”

North Korea reportedly intended to install the 5G equipment it received from China along the border last year. The COVID-19 pandemic, however, temporarily put a halt to those plans. North Korean authorities began constructing 5G systems along select stretches of the China-North Korea border only recently. 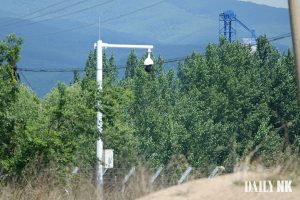 China constructed its first 5G border checkpoint on the Sino-North Korean border in Jilin Province in April 2019 following an agreement between China’s border patrol and mobile communications company China Mobile. China Central Television (CCTV) reported that video from the checkpoint is transmitted in real time to a command center 40 kilometers away in Ji’an using 5G technology.

In a similar fashion, North Korea is apparently using 5G technology to transmit surveillance camera footage from the border to a command center in Pyongyang.

That said, experts told Daily NK that North Korea could construct 5G networks in certain regions as long as it has the equipment to do so. Kim Yu-hyang, an adjunct professor of economics and information technology at the University of North Korean Studies in Seoul and a member of the National Assembly Research Service, said it would be hard for North Korea to build a citywide 5G network in a major metropolitan area due to the country’s domestic economic situation and international sanctions. Nonetheless, the country could install 5G networks in some areas as long as it had the gear, she said.

Kim also noted, however, that while 5G networks are useful in transmitting large data files such as video in real time, wired networks would do just as well. “5G is not a logical communications system for a surveillance network,” she told Daily NK.

Kim So-gyeong, a senior researcher at the Korea Information & Communication Industry Institute (KICI), also said 5G networks are more expensive than LTE networks because they require much denser infrastructure. “If they are sending video footage from the border to Pyongyang, it seems highly likely they are capturing the video data at the border using 5G, but ultimately sending it to Pyongyang using a wired network,” he said.

This is to say, even if North Korea did install 5G equipment, they cannot make full and proper use of the mobile technology’s capabilities.

Moreover, because Sinuiju and Pyongyang are around 230 kilometers apart, with mountains accounting for much of that distance, building a 5G network between the two cities would likely prove difficult. It would also require a significant amount of equipment and money.

KICI’s Kim noted, however, that North Korea has repeatedly stressed the importance of acquiring 5G technology in recent years, which means that “it’s also possible they built a partial 5G network at the border to test for research purposes.”

This article first appeared on Daily NK, which contacts multiple sources inside and outside North Korea to verify information. The Diplomat was not able to verify the claims independently.

Cryptocurrency is not only a financial asset to steal and launder, but also a lucrative tool to help fund global espionage and recruit foreign agents.

North Korea held a military parade to celebrate the 90th anniversary of the founding of the Korean People’s Revolutionary Army on Monday.

By Hyung-Jin Kim and Kim Tong-Hyung

Kim Il Sung’s birth anniversary, the most important national holiday in North Korea, passed without the expected military parade or any missile testing.