Seven months since the military coup in Myanmar, the political wing of the rebel Arakan Army (AA) has significantly expanded its administrative and judicial mechanisms across Rakhine State in western Myanmar, with hundreds of its personnel now effectively administering the region independently of the military junta that rules in Naypyidaw. The group is also attempting to involve the state’s entire population, including the Rohingya Muslims, in the governance of what it hopes will become an autonomous  Rakhine State.

On April 11, 2020, the 11th anniversary of the formation of the AA, Gen. Maj. Twan Mrat Naing, the army’s commander-in-chief, outlined the concept of the “way of Rakhita,” which he described as “the struggle for national liberation and the restoration of Arakan’s sovereignty to the people of Arakan.” This refers to the restoration of the independent Arakan kingdom that ruled significant parts of western Myanmar until 1824, when it was conquered by the Burmese kingdom based in Mandalay.

In an interview with the U.S-based Arakkha Media on August 15 of this year, Twan Mrat Naing said that in the pursuit of this long standing Arakan dream, there will be no compromise. “We never had a price tag in attempting to wrestle back our lost sovereignty for the Arakan people,” he said. “There will not be in the future, either.”

On February 1, the Myanmar military, or Tatmadaw, took over the country, ousting the civilian government led by the National League for Democracy (NLD) and arresting leaders including State Counselor Aung San Suu Kyi and President Win Myint. The military has said it took over the country due to rampant “voter fraud” by the NLD, and the junta’s newly-appointed Union Election Commission has since annulled the result of the election.

The coup tipped the country into political turmoil. Immediately, nationwide protests broke out, which were followed by deadly crackdowns that have since claimed the lives of over 1,000 people, according to the Assistance Association for Political Prisoners.

Ethnic armed groups including the AA have condemned the coup and violence against civilians. A powerful ethnic armed group based in Rakhine State, the AA has been fighting for greater autonomy since 2018, and has become one of the most serious threats to the junta’s hold on power. Indeed, in a bid to placate the AA’s leadership and seek its support, the junta removed the organization from its list of terrorist groups in March, about a month after the coup.

Prior to the coup, intensive armed conflict between the AA and the Tatmadaw had displaced more than 230,000 civilians, while nearly 1,000 were seriously injured or killed by artillery shelling, gunshots, and landmine explosions, including more than 170 children.

The NLD government, led by Nobel laureate Aung San Suu Kyi, called for the Tatmadaw to “crush” the AA, imposed the world’s longest internet shutdown in parts of Rakhine State, and designated the AA as a terrorist organization in response to the conflict.

It also excluded the AA from its landmark peace conference, blocked humanitarian assistance to conflict-affected people, and canceled the November 2020 national election in large parts of Rakhine State for “security reasons,” preventing an estimated 73 percent of Rakhine State’s voters from casting a ballot.

The cancellation of the election prompted many residents of Rakhine State to shift their support to the AA, which began establishing its own administration across large parts of the state – a process that it has accelerated since February’s coup.

On April 11 of this year, the 12th anniversary of the formation of the AA, Twan Mrat Naing issued a statement recalling that in the early period of its struggle, the AA worked mainly on mobilization and armed resistance to obtain its political objectives, but is now implementing “a governance mechanism with strong institutions for public administrative affairs including administration, judiciary, and public security.”

Khaing Kaung San, founder and executive director of the Rakhine State-based Wan Lark Foundation, said that the people of Rakhine State increasingly rely upon the AA’s administration and dispute resolution mechanisms, increasing trust and support for the AA’s performance after years of discrimination from successive central governments.

“People have been treated with discrimination by the previous successive governmental departments, including the police and the soldiers,” he told The Diplomat. “Right now, the existence of the AA with its newly introduced Judiciary and Complaints System weakens the arbitrary acts. Not only among people but also the departmental officers serving the current authority do not dare to act arbitrarily like before. They, themselves, have trust in the AA and support the AA’s performance.”

On August 1, the United League of Arakan (ULA), the AA’s political wing, officially announced that the people of Rakhine State can now file or submit their legal disputes including over crimes, land issues, and theft to the ULA’s dispute resolution mechanism. It said that it intends to bring justice for all people living in Rakhine State, regardless of race and religion.

Most notably, the Arakan Army is also planning to involve Rakhine State’s Rohingya Muslims, the second largest group of the state’s population of 3.2 million, in its administrative roles and the police work, Twan Mrat Naing told Arakkha Media. “We’ve planned for them to participate more in our administrative sectors and police work, and also plan to offer training for them on office work, management and law. We’ll have to conduct this step by step,” he said.

Lar Lar Myar, a prominent Rohingya Muslim from Buthidaung township in northern Rakhine State, told Radio Free Asia that he welcomed AA’s statement, adding that the Rohingya community had never been allowed to participate in civil administration under the NLD administration, or any previous central government. 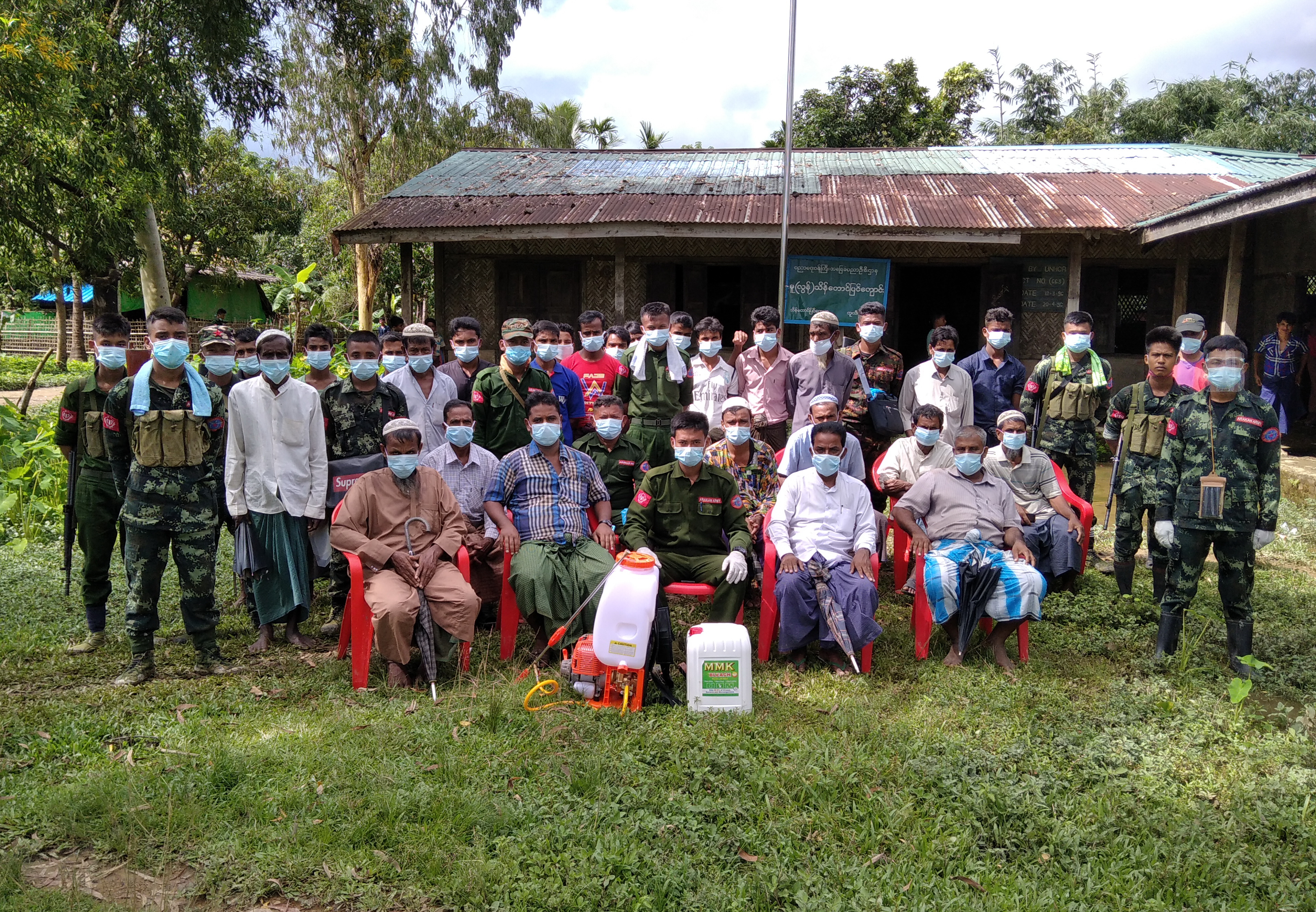 A medical team from the Arakan Army poses with Rohingya villagers after spraying chemical disinfectant during a COVID-19 outbreak in Rakhine State’s Buthidaung township on September 14, 2020. (Photo supplied)

“We are very happy that the Arakan Army will now provide training to all of our people together. We accept them. Now, young people are registering, although the AA hasn’t yet spoken directly to us. But we are compiling a list because of the AA commander-in-chief’s announcement. We are making the list in advance so that it will be ready when AA comes,” he said.

Lar Lar Myar also said that a liaison office for the Rohingya and AA had been established, adding that the state judiciary under the AA has “acted fairly, without discrimination on the basis of race or ethnicity.”

In 2017, the military launched a brutal crackdown that forced hundreds of thousands of Rohingya to flee across the border into Bangladesh – and is now the subject of international charges of genocide at the International Court of Justice in The Hague.

Meanwhile, state-sponsored violence in 2012 forced more than 130,000 Rohingya into internal displacement camps within Rakhine State. They have since been denied citizenship and rights such as education, freedom of movement, and health care under successive governments. During his recent interview with Arakkha Media, Twan Mrat Naing said everyone living in the state were citizens of Arakan regardless of race or religion.

Khaing Kaung San of the Wan Lark Foundation said that Rohingya Muslims have never had the opportunity to take part in administering their villages under successive central governments, but would welcome the chance to help govern under the ULA/AA administration. “Currently the community has been granted authority to administer their villages by their community leaders under the AA administration,” he told The Diplomat.

Earlier this month, Brig. Gen. Dr. Nyo Twan Awng, the deputy commander-in-chief of the AA, told Frontier Myanmar that AA has de facto control over two-thirds of Rakhine State, and is now exercising effective executive and judicial authority in these areas.

Khaing Kaung San said that Rohingya communities were being “provided protection by the AA with regard to their well-being and health care. Not only in the AA-controlled areas, but also in other places including Sittwe, communication between the two communities exists.”

In the AA’s pursuit of its dream of an autonomous Arakan polity, an inclusive approach also makes pragmatic sense. Unlike previous rulers of the state, who have pitted its ethnic communities against one another, the Arakan Army’s strategy of including community leaders from minority communities, especially Rohingya, into the administration of the state increases the likelihood that it will succeed in maintaining stability and peace.

Kyaw Win, founder and executive director of Human Rights Network for Burma, said that the lives of the Rohingya have gotten steadily worse under a succession of central governments, and that they would no doubt welcome any AA administration that accepts them as legitimate members of the family of Arakan. “AA should prove that they are different by their actions, and I believe that they are doing so,” he said.

As the country's crisis deepens, the lines between attack and defense are beginning to blur.

Save the Children Confirms Two Staff Killed in Myanmar Massacre

The terror attack in Kayah State portends a dry season military offensive against the anti-coup resistance.

The sentences relate to just two of the more than 10 criminal charges facing the country's ousted leader.

The move followed on the heels of ASEAN's decision to uninvite regime chief Min Aung Hlaing from its upcoming summit.