The exercise to vaccinate people against COVID-19 has been a stupendous task for the Indian government across the country but particularly so in a few border districts of India’s Northeast. While the massive size of India’s population has been an important challenge for health authorities vaccinating people elsewhere in the country, it is the difficult terrain, low population density, and poor connectivity that has made the vaccination exercise more daunting in the Northeast.

In Arunachal Pradesh, one of the eight states in the country’s Northeast, the vaccination campaign was particularly challenging in Dibang Valley, which abuts China. The district has a population density of just one person per square kilometer, which means that government officials have to trek over vast distances to reach a few people to vaccinate. In this hilly region, villages are poorly connected. There are no roads to villages in this remote region. 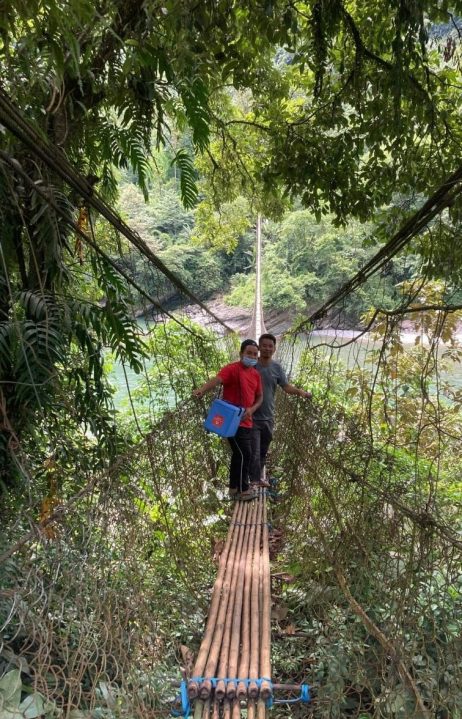 According to Deputy Commissioner of the district, Minga Sherpa, was quoted by the media as saying that medical teams were sent to some border villages as the elderly people in these villages were unable to reach the vaccination centers set up by the government.

The district administration enlisted the assistance of village councils and interpreters to cover as many villages as possible for the vaccination drive.  Some individuals also chipped in to offer assistance for supplying medicines to the inaccessible habitats.  Tine Mena, a well-known mountaineer who had scaled Mount Everest, organized several missions to the border villages for distribution of medicines and essential equipment.

In May, a nine-day lockdown was enforced in as many as six districts of Arunachal Pradesh, including Dibang Valley amid a spike in COVID-19 cases. Through mid-September, the hilly state had logged 53,990 cases with 271 people succumbing so far to the disease. While the region around the capital complex of Itanagar recorded the highest number of cases in the state, Dibang Valley  registered 317 cases and two fatalities.

However, there is a huge gap between the numbers who have received one shot and those who are fully immunized.

The Indian Air Force so far has carried out 98 sorties from 11 countries to airlift oxygen-related supplies and other equipment for use back home.

The Khasis: A Matrilineal Society in India’s Northeast

The Khasi tribe in Meghalaya is one of the last remaining matriarchal societies in the world.

Roads and bridges as well as "vibrant villages" are being constructed and upgraded to improve overland connectivity to the border with China.