As we commemorate the 30th anniversary of the Paris Peace Agreements, we would do well to recognize the importance of history, and in particular Cambodia’s military history, for the region and the world. Cambodia’s history should be recognized as a national resource to inform the country’s strategic development, influence, and leadership in the ASEAN region.

Military history has been described as the research of war and the analysis of victory and defeat; however, it also encompasses much more. Military history covers a range of topics from the rise and fall of regimes to the transformation of countries, and how humanity repeats and/or learns from its mistakes. Cambodia’s history is filled with unique lessons for the country, region, and world.

Cambodia was a significant crossroads in the Cold War struggle between ideologies, political systems, and foreign policy agendas. The history of Cambodia that led up to, and comprises part of, the history of foreign interventions in the region demonstrates how critical the country is to regional security, and the region’s security is to global security. Further, the mass atrocities, war, and deprivation that colored so much of Cambodia’s history in the latter part of the 20th century provide important lessons on the conditions that precipitate and result from instability, war, and genocide. Cambodia’s history is an illustration of the human spirit as much as a lesson in the depths of human depravity.

The history of Cambodia is also punctuated by numerous attempts by neighboring countries to encroach upon, occupy, and even usurp territory from the Cambodian people. Studying the history of these past relations, disputes, and conflicts will not provide a roadmap for current or future diplomatic or military affairs; however, this history is a national resource that empowers leaders with strategic wisdom on how to manage relations with neighbors and the world. 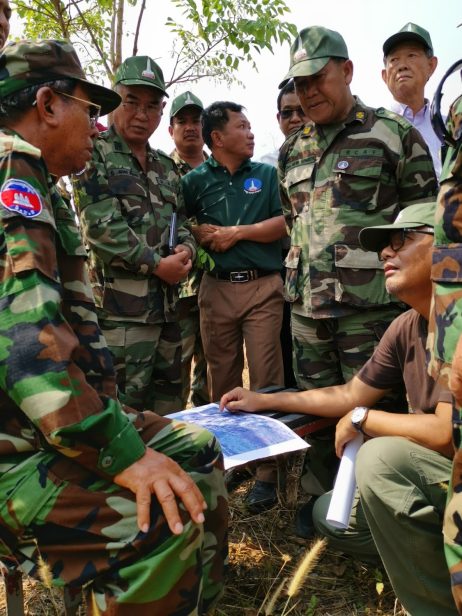 History shapes the core components of all successful strategies. Military history ensures that strategy is not only informed by the current operational environment, tactics, and doctrine, but also the successes and mistakes of the past. History can provide insights into whether the objectives of a strategy are acceptable, whether the methods for achieving those objectives are even feasible, and how predecessors fared in using the same or different strategies in the past. Military history is a key component of all combined military and national security strategies.

During 1975-1979, the people of Cambodia also suffered unspeakable tragedy under the genocidal Khmer Rouge regime, and though the Khmer Rouge were overthrown from power in 1979, Cambodia continued to struggle with war, famine, and humanitarian crises resulting in the death, displacement, or resettlement of millions of Cambodians. The defeat of the Khmer Rouge was not only a strategic victory for Cambodia; it was a strategic victory for ASEAN and the world.

The military engagements, maneuvers, and strategies that played out in Cambodia between 1979 and 1993 rippled across the region, and to some extent many of these forces shaped (and still shape) the geopolitics of ASEAN today. Cambodia’s military history is a history of not only battles and military maneuvers but also key political decisions and strategies that remain important references for informing national security and collective ASEAN strategy in the Southeast Asian region today.

As we mark the 30th anniversary of the Paris Peace Agreements, we should take the opportunity to not only reflect on what we must learn from the history surrounding these agreements, but also how much we can learn from all of Cambodia’s history. The importance of this history has perhaps never been greater than now, as Cambodia prepares to assume the chair position for ASEAN in 2022.

As Cambodia prepares for its stint as ASEAN’s rotating chair, we should recognize this upcoming leadership role as an opportunity to leverage, among many other resources, Cambodia’s history to inform the Cambodian and ASEAN peoples’ collective development, partnership, and leadership. Cambodia’s history is part and parcel to envisioning a collective peace and security for the ASEAN region.

In collaboration with Japan, Cambodia will dispatch experienced demining specialists to Ukraine.

What Lies Ahead for Cambodia-Laos-Vietnam Trilateral Security Cooperation?

A recent engagement between the three nations shone a spotlight on the intraregional security dynamics in mainland Southeast Asia.

Cambodia Needs to Move Past the Narrative of ‘National Salvation’

For decades, politicians on all sides of the political spectrum have framed the country's choice as one between salvation and extinction.

The ECCC delivers its final verdict with closure on the horizon.