Dr. Maung Zarni today is known as a staunch pro-democracy and human rights activist who has spearheaded many international boycotts against Myanmar’s military dictatorships. But as someone raised in a family with deep ties to the Tatmadaw, his early attitudes were much different.

“I admired soldiers and even aspired to become a military officer,” he told The Diplomat. In fact, he “previously considered [the Tatmadaw] as the most patriotic, non-partisan organization” in Myanmar.

The monopoly on truth in a tightly controlled Myanmar meant that little knowledge on the conduct of soldiers made it to the public. Yet, a legacy of violence must leave some traces, thereby disillusioning the believers and undermining the credibility of the system.

Due to his background, neither Zarni nor his family had ever suffered any abuses, yet he eventually was confronted with the cruel reality behind the institution.

“I came into contact with students from the war-torn minority states such as Shan and Kachin… a couple of my tutors were former political prisoners,” he said.

These encounters were long before the 8/8/88 revolution, when the Burmese people revolted en masse only to be killed by the troops. Watching from outside of the country that “slaughter of young students […] was the real turning point,” Zarni recounted.

For the younger generation that grew up after the bloody events of 1988, the political awakening came in a different way. “I attended military primary school and high school. All my friends were Burmese Buddhists,” said Thinzar Shunlei Yi, who started her activism for justice and peace as early as 2012. It was education about democracy that led her to challenge the military supremacism and to fight to change the political system by advocating for ideological transformation.

Today, Thinzar stands at the forefront of the Spring Revolution, which is aiming to finish what the 8/8/88 revolutionaries started. In the year since the coup, both ethnic areas and major cities have been experiencing the crimes of the Tatmadaw committed on a large scale. This has created a sense of unity between pro-democracy fighters of different backgrounds.

“Democracy embraces diversity and manages to flourish out of it – Tatmadaw simply isn’t designed to lead this path,” Thinzar told The Diplomat, bringing up the fact that Myanmar’s generals often claim to support so-called “disciplined”  democracy. “The more I learnt about democracy, the more I saw the role of Tatmadaw [was] unfit in the current political framework.”

Thinzar argued that “being raised with independence movement films and songs turned many into strong nationalists with irrational, self-constructed notions on race, religion, and ethnicity.” She sees this as a burden for all of society.

In addition, she criticized “the over-protectiveness and proactiveness in condemning the differences between the people,” which saw called “the result of fascist-styled uniform thinking” that perpetrates the military.

In fact, Myanmar military myths are based on the history of fighting for independence, resisting foreign intervention, and defending the integrity of the country. The once-porous border with China and the recent military operations against the Rohingya people continue to shape the mindset of many people affiliated with the military.

The military’s monopoly on nationalistic narratives is most noticeable through street banners with slogans such as “never hesitating, always ready to sacrifice blood and sweat is the Tatmadaw.” These banners adorn public places across the country and promote the military’s preferred self-conception.

Beyond adherence to national myth-making, there are practical reasons driving the military’s supporters as well. Zarni stresses that because of the military’s prominent role in the national economy, officers and their families enjoy many more opportunities and privileges, which explains why many soldiers do not dare to challenge the status quo.

“The military officers can hope to get important job placements in the civilian line of ministries (tourism, finance, health, forestry, mining, agriculture, trade, etc.), irrespective of their professional qualifications or lack of them, when they leave the military,” Zarni said.  “Also, [Myanmar’s] police force is also led by veteran military officers. Veteran organizations – with over a million members – are given many economic opportunities. So, all these economic, commercial, employment opportunities are too good to ignore for many Burmese men.”

And although most rank-and-file soldiers live a modest life (provided with salary, accommodation, food, and phones), “the officers self-perceive themselves as superior, better and smarter than any civilian, and as the members of the only patriotic national organization,” Zarni explained. Therefore, the institutional and social inversion of military-civilian relations “compensates for any material deprivations the soldiers experience.” They truly believe that the “military is above civil society and must be above any democratic control.”

In that regard, Zarni stresses the importance of internal military propaganda, where “the killers in uniforms [learn] that they are virtuous defenders of the country, of the race and of the Buddhism.”

Importantly, “men with guns will always feel they have had it better than any civilian families with comparable economic means,” just due to “the psychological appeal of holding a weapon in a state-sanctioned organization. This cannot be underestimated,” he said.

After Aung San Suu Kyi was released from house arrest in 2010 and subsequently ran in the by-elections, accepting the military-drafted 2008 Constitution, things changed for many people after decades of isolationism in Myanmar. Yet, her strategy of national reconciliation with the military undeniably failed. Today, the protesters reject any suggestions that the country should return to something resembling the power sharing arrangement Aung San Suu Kyi had with the generals from 2015 to 2020.

“Her strategy was never explained publicly or could be predicted,” Thinzar claimed. “People followed blindly what she said,” and this posed additional challenge for the democracy movement.

Zarni, too, does not spare harsh comments when evaluating the policy of the detained leader. Being aware the dangers of engaging with the Tatmadaw, he had warned Aung San Suu Kyi in the past about the slim chances of changing the military’s mindset: “She was basically a one-woman show, and the generals work like a tight gang of mafia.” 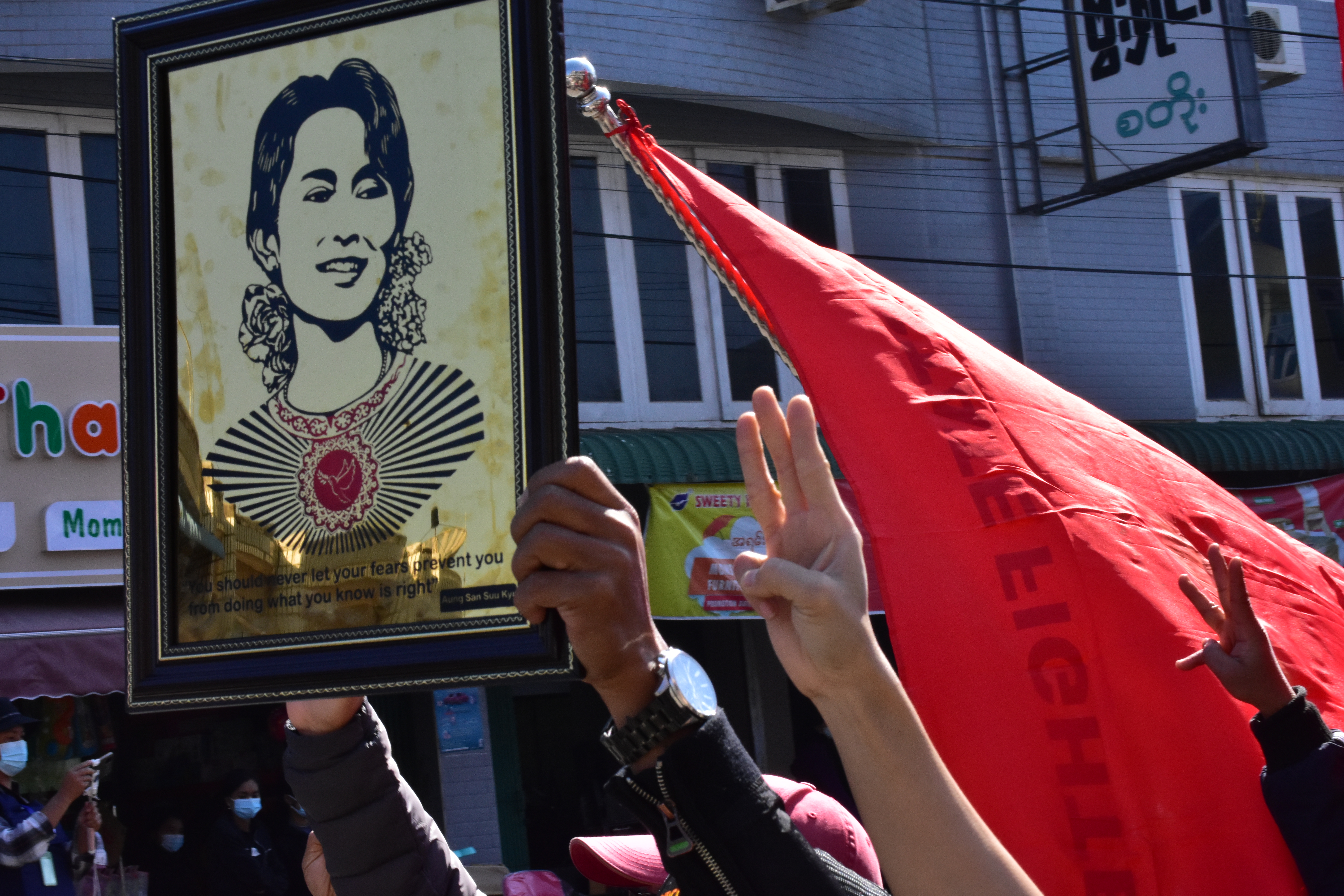 Admired by many in Myanmar, Aung San Suu Kyi is often criticized for her human rights record during her time in power. Photo by Robert Bociaga.

The activists argue that the discrimination and oppression are a part of the fabric of the military, and they must be held accountable for their crimes. For these reasons, a large part of their advocacy is directed toward the international public.

Zarni, who is a member of the board of advisors of Genocide Watch and a non-resident fellow at the Documentation Center of Cambodia in the Sleuk Rith Institute, believes that “the murderous actions of the military post-coup in ethnic minority areas such as Chin, Kachin, Karen, and Karenni have an element of genocide because the troops are fully aware of the ethnic and religious identity of the villages and residential areas and parts of towns.”

Indeed, attacks by the military go well beyond retribution against the resistance movement. Dozens of reports have proved that soldiers not only destroy religious buildings and rice storehouses, but also torture and burn alive people who are not a part of the armed resistance. Many people are denied access to humanitarian aid.

No one is being held accountable for these crimes. On the contrary, diplomats and international agencies still hope that the junta and the resistance movement will find a common ground.

Zarni has no illusions: Genocidal regimes “will never be the solution.”

“Sanctions are the least things the international community can offer” in order to “display their discomfort and disagreements over what the military is doing in Myanmar,” claimed Thinzar.

This was echoed by Zarni, who added that “the power and significance of sanctions drastically increases when there is a very active society-wide opposition, multi-fronted armed revolution, sabotage of key infrastructure.”

The activists believe that the political, psychological, and PR effects of corporate withdrawals constitute a big blow to the junta, yet many countries still continue to provide the junta with weapons and money.

For many, the lack of international action in Myanmar proves the dysfunctional nature of the United Nations. “I absolutely understand the frustrations of the people and civil society organizations who want a robust response in support of them,” said James Rodehaver of the United Nations Office of the High Commissioner for Human Rights.

For Rodehaver, the pro-democracy movement wrongly sees the U.N. “as a monolith instead of what it is in a reality: a conglomeration of member states with deep differences amongst them.”

In addition, the geopolitics and the dynamics at work in the U.N. Security Council are completely different from what they were at the time of previous key crises.

“Accountability is a long road… sadly, with a lot of twists and turns,” Rodehaver said.

Can Defections Take Down Myanmar’s Military?

The post-coup resistance movement has its sights set on toppling the Tatmadaw once and for all – including by weakening the military from within.

How the Coup Shattered the Image of Myanmar’s Military

The Tatmadaw has slid from a repressive to a repugnant institution in public opinion.

The coronavirus pandemic curbed celebrations for the past two years, and the military’s ouster of the elected government last year further smothered the holiday spirit.