The U.S. National Security Council’s Indo-Pacific coordinator, Kurt Campbell, will visit Solomon Islands this week, in a last-ditch effort to prevent the Sogavare government’s new security agreement with China, which could lead to the People’s Liberation Army’s first base in the Pacific Islands. The agreement has been initialed, and is only waiting for the Solomon and Chinese foreign ministers to sign for it to take effect. (Update: Shortly after this article was published, China made the announcement that the deal had been signed by both foreign ministers.)

In January 2022, Campbell told a panel discussion that the South Pacific was the region where he most expected to see some kind of strategic surprise, whether a base or a security agreement. Campbell wasn’t as prescient as you might think; both the Australian and New Zealand governments have been raising this fear for the last few years. In August 2021, Matthew Wale, leader of the opposition in the Solomon Islands, even warned Australia of specific plans underway.

Yet even this level of information was not heeded. That’s because U.S. policy on the Solomons and the wider Southwest Pacific region has a fatal flaw. Distracted by other global challenges, the U.S. government has outsourced its regional policymaking to Australia. And Australia’s approach, which concentrates power on the Solomons’ central government, has been a contributing factor in this looming geopolitical disaster. It’s time for the United States to shape its own policy on Solomon Islands, otherwise Campbell’s trip is a fool’s errand.

There are a number of new policy approaches Washington could try in dealing with the Solomon Islands. First of all, Campbell can call Sogavare’s bluff that the security agreement with China is aimed at diversifying the Solomons’ security relations, and offer a U.S.-Solomon Islands security agreement. Sogavare has said he is seeking security agreements with Fiji and Papua New Guinea (PNG), in addition to an existing one with Australia. Honiara is well on the way to becoming the Djibouti of the Pacific.

It’s for this very reason that Pacific leaders are quietly horrified by Sogavare’s agreement with China. They say they felt “blindsided” by his secret deal. It has dragged Solomon Islands and the Pacific into the China-U.S. military rivalry, in the same way it was once the site for crucial Japan-U.S. battles in World War II. Governments may change, but geography does not. The Federated States of Micronesia, Fiji, Palau, Tonga, and PNG have all publicly raised concerns with Sogavare, so far to no avail.

Under the new agreement, China can send military personnel, intelligence and information support, police, and other armed personnel to the Solomons. Yet Solomon Islands faces no external security threat that justifies this level of military and intelligence presence. Sogavare wants the PLA and Chinese police forces on hand to suppress his domestic rivals. The China-Solomons security agreement thus poses a great risk to Solomon Islands’ fragile, but vibrant democracy.

For this reason, Campbell should be sure to meet with opposition MPs during his stay in Honiara. This is quite usual for visiting dignitaries arriving in a democracy. Solomon Islands is soon to hold a national election. Sogavare is deeply unpopular, and the United States must make sure it is on good terms with all political forces in the Solomons.

The U.S. has been absent from Solomon Islands for a long time and needs to speed up setting up an embassy and sending an ambassador. It currently only has a tiny consular office, in a humble building on the Honiara waterfront. China, in contrast has an unusually large three-story building for its Honiara embassy, which will have plenty of room for the police, intelligence, and military personnel who are set to arrive soon. Sogavare will thus be able to maintain his fiction that China will not set up a base in the Solomons. 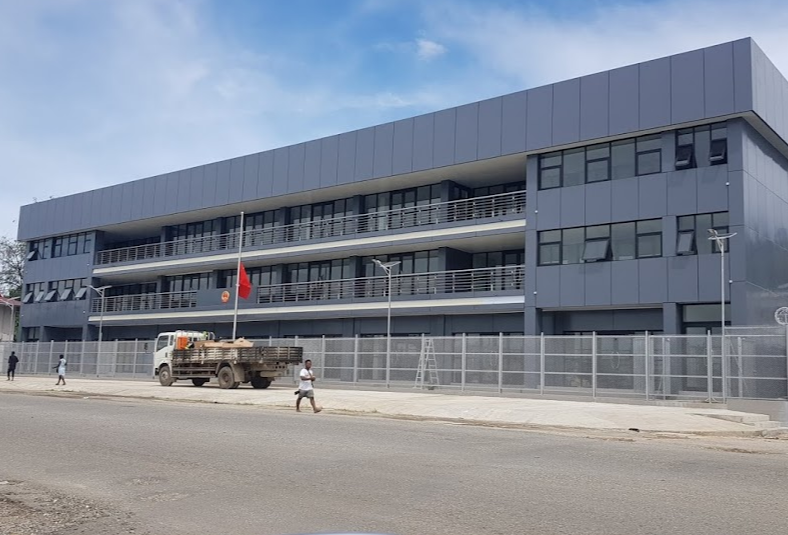 Campbell can use his trip to announce a number of long-overdue deliverables. He should offer immediate clearance of remaining Remnants of War (ERW) and Unexploded Ordnance (UXO) from the battle fields, particularly on Guadalcanal and the Russell Islands. He should offer U.S. maritime support to protect the Solomons from illegal fishing, much of which is done by Chinese fishing boats.

The U.S. has so far made a modest $25 million contribution in the Strengthening Competitiveness, Agriculture, Livelihoods and Environment (SCALE) Project, part of the Indo-Pacific $200 million Pacific Pledge. Campbell could use the model of the USAID SCALE program at Malaita to expand further infrastructure projects in Solomon Islands. There are shovel-ready projects waiting to go. Sogavare has been accused of holding back aid to the regions as a means to control his political rivals.

Solomon Islands desperately needs investment in infrastructure. It was the Chinese government’s promise that it would offer this assistance to the Solomons – locally rumored to be as much as $500 million – that helped swing the country’s sudden change of recognition to Beijing from Taipei in 2019. Unlike the U.S. and other Western donors, however, China’s infrastructure assistance is offered in the form of loans, which will add to Solomon Islands’ existing indebtedness.

So far none of these infrastructure projects have been started. Instead, China was awarded the contract to a Chinese state-owned enterprise to build a white elephant $74 million sports stadium, so the Solomons can host the 2023 Pacific Games. The jobs for this project have gone to Chinese nationals.

The United States needs to step up in the Solomons, and there is little time left to do so. Campbell has made it clear he understands the security threat to the region. Now is the time to use military-level funding and assistance to counter China’s aggressive moves.

By Alexander B. Gray and Cleo Paskal

The U.S. has been largely subcontracting its foreign policy for many Pacific Islands to Australia and New Zealand. That needs to change.

The Pacific Islands states have rejected China’s overreach. But are Washington’s efforts any more attractive?

After a whirlwind of visits and agreements, where does the Pacific region stand?