Since its democratization, Mongolia has been modernizing its methods to preserve traditional ways of life without diminishing economic development. Historically, the long-standing nomadic lifestyle has fostered a strong connection between nature and people in Mongolia. The construction of an ovoo, a Mongolian term for a cairn, is among the many cultural phenomena that are celebrated at both the state and public levels. Yet in the mining era, cultural sites such as ovoos face greater threats, raising the need for environmental care.

An ovoo is a pile of stones, dirt, and tree branches laden with people’s gifts and offerings to connect with the land’s spirit. Throughout Mongolia’s history, ovoos were used as landmarks, border crossing points, meeting locations, and assembly places. Similar practice are widely known around the world. For example, Scandinavian countries, including Norway, Scotland, and some areas of the United Kingdom, have preserved what is called a càrn (in Scottish Gaelic), a stack of rocks in different sizes and shapes.

The government is responsible for the annual mountain and ovoo worshipping ceremonies at the state level. In 2009, then-President of Mongolia Elbegdorj Tsakhia passed executive order No. 32, “Regulation on State-sponsored Ovoo Ceremonies in the Sacred Mountains.” This order, which is still active, highlights the ordinance code, which mandates the state’s annual obligation to conduct ovoo and sacred mountain ceremonies, worship the eight state-sponsored sacred mountains, and give local governments authority to prepare yearly ceremonies.

The state-level ceremonies contribute to the non-tangible elements of governance, such as the prosperity of the country, a celebration of national history, and honoring long-surviving traditions. The government passes laws and regulations on who should attend and how to worship certain sacred mountains and ovoos, while local governments and religious entities such as Buddhist monasteries will execute these plans.

The public – free of ceremonial obligations and the duty to ensure environmental care – voluntarily visits and worships ovoo sites around the country. But modern Mongolians, particularly the younger generation, has seen lagging participation in maintaining such an old tradition, although they are respectful toward the practice.

An online-based survey was conducted in 2019, to which 144 Mongolians responded. The study’s objective was to highlight Mongolians’ perspectives on environmental issues surrounding ovoo sites. Among the 144 respondents, 75 percent said they believe in ovoo ceremonies. Of those people who attend ovoo ceremonies, 75 percent wish for the general well-being of the country or good luck for themselves and their loved ones. When asked why they believe in ovoo ceremonies, 60 percent of the respondents pointed to ancestral tradition and culture. Lastly, 20 percent of the respondents said religious connections such as boo, tengerism, shamanism, or Buddhism are part of their belief in ovoo worship.

In the comment part of the question, 40 percent of the respondents stated that materialistic objects are trashing the ovoos, while 22 percent said food and milk products left as offerings at ovoos are causing problems, by giving off a foul stench and attracting wild animals.

The survey illustrates that modern Mongolians are not only spiritual but carry a strong tie to their ancestral traditions. And sometimes, these spiritual and traditional practices conflict with the country’s economic activities, particularly mining. 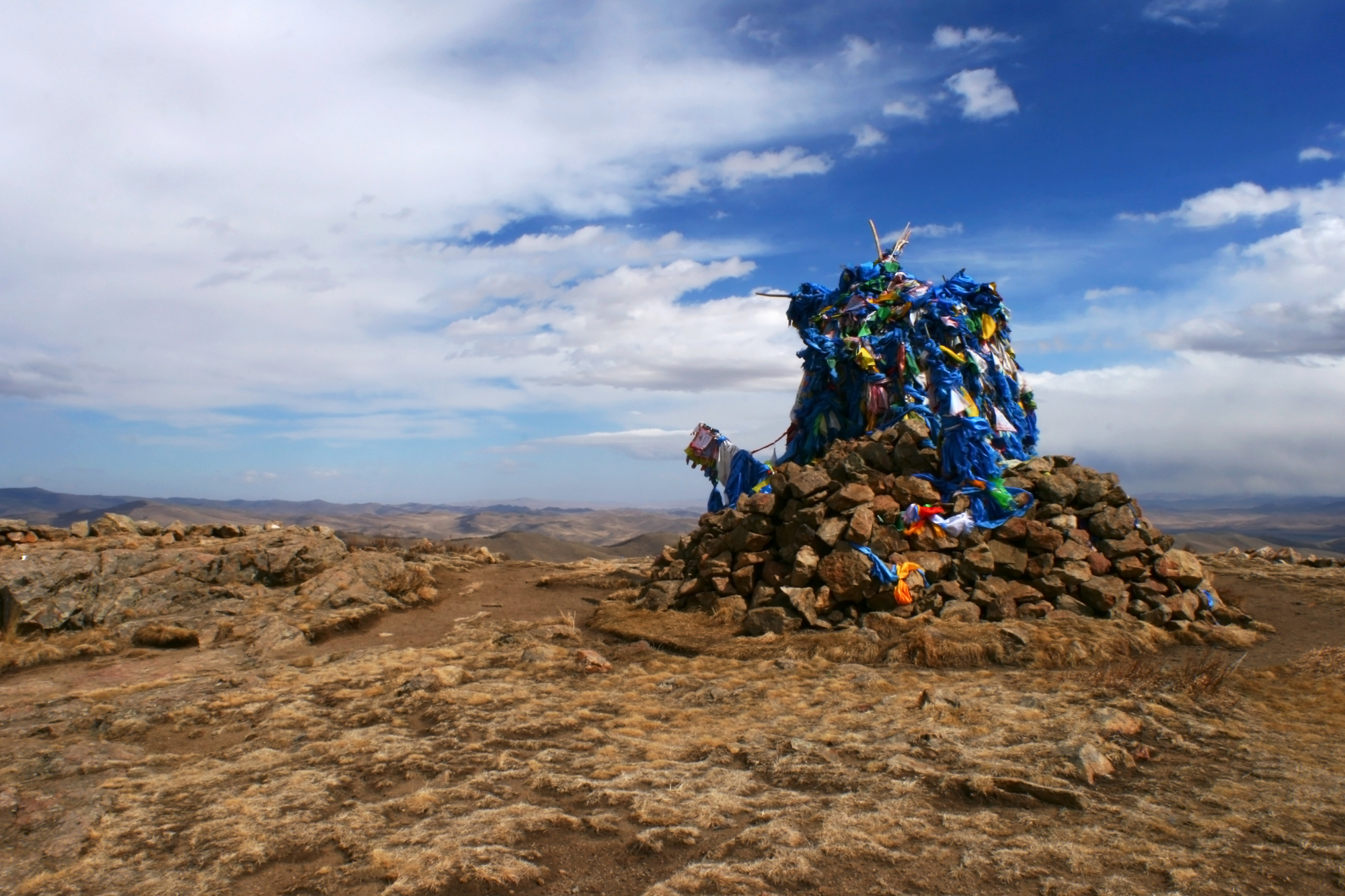 An ovoo covered with silk scarves in Tövkhön Monastery, on the mountain of Shireet Ulaan, Khangai Nuruu National Park, Övörkhangai Province, Mongolia. The monastery is a UNESCO World Heritage Site. Photo via Depositphotos.

Mongolia, a mecca of natural resources, will continue to face environmental issues in the coming decades. Large mining or infrastructure projects may compromise environmentally protected areas, including the ovoos and sacred mountains. Mongolian policymakers must be vigilant in decision-making. Mongolia desperately needs foreign investments, but given the global environmentalism trend, having a specific part of the Mongolia’s heritage sites protected and maintained under an international partnership might be helpful.

In Mongolia’s fight to protect national heritage sites, the international community has not been idle. Major international organizations such as UNESCO have supported Mongolia in preserving sacred sites. In 2015, 10 sacred mountains were submitted to UNESCO to protect their historical and traditional significance. This action has significantly contributed to preserving Mongolia’s natural environment and wildlife as sacred and pristine. These international efforts and their best practices can be learned and implemented by local governments in maintaining greater environmental care for ovoo sites.

According to the Asia-Pacific Database on Intangible Cultural Heritage (ICH), Mongolia, at a national level, has many government agencies and organizations dedicated to preserving and promoting traditional properties. In Mongolia today, six prominent NGOs are active in preserving cultural heritage, such as the Mongolian National Center for Intangible Cultural Heritage, Researchers and Supporters Society for Mongolian Traditional Art, and Mongolian Center for Shamanistic Research.

The efforts of the Mongolian government and the Mongolian people themselves will play a fundamental role in establishing and developing an action-based policy that protects, maintains, and preserves cultural sites, such as ovoos and other sacred lands. It is vital for Mongolia, a mining-depending economy, to carefully assess the pros and cons of its circumstances and take care to leave a nourishing environment for the next generation.

What COP26’s Shift Away From Coal Means for Mongolia

Coal-based economies like Mongolia will need a rewiring of climate finance to make a transition to clean energy possible.

20,000 police officers and more than 1,000 soldiers were on patrol as thousands of protesters took to the streets.

“We must take care of them and ensure their safety. This is a political and humanitarian issue,” Kazakh President Tokayev said of the influx of Russians.